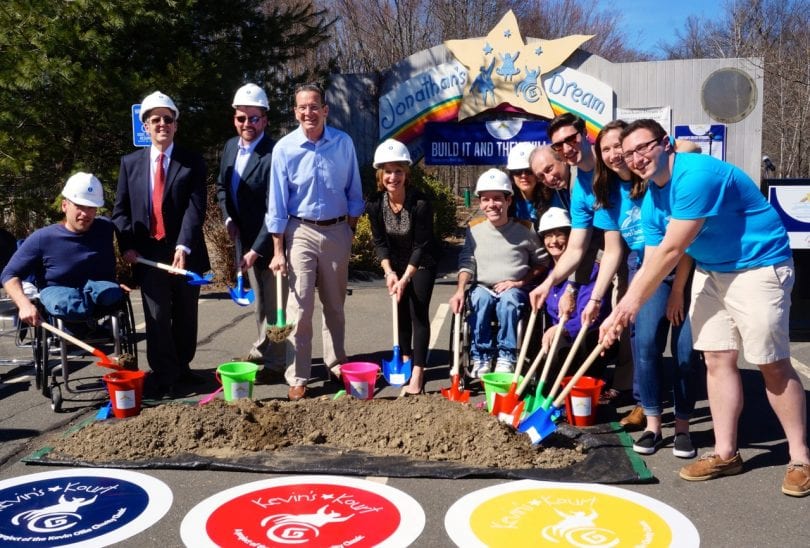 Work will begin this summer on Jonathan’s Dream Reimagined, a revolutionary and completely inclusive playground that will be built on the site of the original Jonathan’s Dream at the Mandell JCC in West Hartford.

Child-sized plastic shovels were put into action scooping piles of dirt into child-sized plastic buckets Sunday afternoon at the Mandell JCC in West Hartford, as at least 100 people gathered under a bright blue sky to officially break ground for Jonathan’s Dream Reimagined.

Under a banner that reads “Build it and they will play,” the dream that Amy Barzach and her husband Peter had more than than 20 years ago – for a playground where children of all abilities could play together and just be children – will become reality again.

It’s really a “reverse-groundbreaking,” said emcee Dennis House of WFSB, who covered the original groundbreaking 21 years ago. “We’ll put a shovel of soil into the pail and that soil will be married to the ground upon which the new Jonaathan’s dream Reimagined will be built. The same ground you might say is again growing something wonderful.”

And just like the original Jonathan’s Dream, the new playground will be built by a “village” of countless volunteers who have raised funds, made plans, donated time, services, and materials, and are bringing back a playground that has held a special place in the hearts of so many people.

Perhaps the most touching moment was the singing of “Play Together” by the the Barzach children (Alyssa, Michael, and Daniel), and their friend Michael Steiner. The song (see video above) was written about Jonathan’s Dream by Grammy award-winning songwriter Josh Kear. Amy Barzach recalled how Kear wrote it, stanza-by-stanza, and his wife sang it back to him – as they sat together watching children play at the original Jonathan’s Dream and she shared the story of her son Jonathan, and how she developed the vision for a playground where all children could have fun and just be children.

The original Jonathan’s Dream opened in 1996, the legacy the Barzachs created to honor their son, Jonathan, who was born in 1994 with the degenerative neuromuscular disorder Spinal Muscular Atrophy, and sadly died before his first birthday.

Had he lived, Jonathan would have been confined to a wheelchair, and Amy Barzach never forgot a moment, before her son’s diagnosis, when she had noticed a young girl in a wheelchair sadly watching other children on the playground. Following the success of the innovative Jonathan’s Dream concept, Amy Barzach went on to found and serve as executive director of the non-profit Boundless Playgrounds, building accessible playgrounds in more than 200 communities.

Amy Barzach said that when Jonathan’s Dream came down, “it felt like someone had put a claw into my heart.” It was almost as bad as when Jonathan had died. The original playground, which was built of wood, had reached the end of its useful life and was taken down in 2013. She said she wasn’t sure she could rebuild the playground, but the families, volunteers, and supporters made it happen.

“A bird set free,” was the refrain of one of the pieces that Rubyfruit sang, and Malloy said it was such a fitting image for a place like Jonathan’s Dream which gives children with difficulties a place to be free. “These birds, these children, when they come here will be set free.”

Jonathan’s Dream Reimagined will include several unique features, among them “Kevin’s Kourt” – an accessible basketball court supported by a donation from UConn men’s basketball coach Kevin Ollie. Ryan Martin, a former professional wheelchair basketball player, represented the organization at the groundbreaking. Jay Sloves of Kevin’s Kourt said that although a court opened at the Boys & Girls Club of Hartford in June, this one was the inspiration and the first court of its type to be funded through the Kevin Ollie Charity Classic.

Jonathan’s Dream Reimagined will also include “Max’s Jeep,” an element that was part of the original playground. Max Brown, a young tech industry professional who has spinal muscular atropy and uses a wheelchair, attended the groundbreaking and shared the story of how he used to come to Jonathan’s Dream when he was in West Hartford visiting his grandparents. He said the jeep was his favorite part. “I could be anyone I wanted to be,” he said.

Max’s Jeep in Jonathan’s Dream Reimagined is being sponsored in his honor by The Bodenheimer Charitable Trust and The Brown Family.

“It takes a village to build a playground, literally it does,” said Shoham, who has done extraordinary work leading the efforts of that “village.”

In addition to the playground, Shoham showed off a beluga whale-themed Little Free Library that has also been donated for the site. “Literature and books also bring people together,” she said.

Cantor said she brought her children to play at the original Jonathan’s Dream, and realized how special it was when her youngest son, born with a heart defect, couldn’t go in a normal swing. “While I was here I saw and learned so much from families that needed this playground,” she said.

Jonathan’s Dream Reimagined takes the concept even further. “The focus was for wheelchair accessibility, … this is for children of every ability … Every single child that may have a special need that can be incorporated in this magical place,” said Cantor.

Those special elements include a roller slide that children with cochlear implants can use (a regular slide can short-circuit the device), and a Buddy Bench to encourage empathy and foster friendship among children using the playground.

There will also be a zip line, equipped with a special harness, so that all children can fly.

Construction, which is weather-dependent, will begin shortly with a “community build” planned for sometime in August, slightly later than planned because of recent soaking rains. More than 1,000 community volunteers helped construct the original Jonathan’s Dream, and the Dream Team wanted to create a similar experience for the new playground.

Jonathan’s Dream Reimagined will have a “soft opening” throughout the summer and a grand opening in September, after Labor Day and once the landscaping can be completed.

To learn more about the community build, become a captain, or reserve a volunteer spot, please contact Frank Day at [email protected]com.

Jonathan’s Dream is being rebuilt with the support of the community, the PAC Group which is donating construction management services, and Shane’s Inspiration, which donated design services, but approximately $150,000 is still needed to fully fund the playground, Shoham said.

The entire project will cost approximately $1.2 million. A major impact on the fundraising was made in July 2015, when the State of Connecticut approved a $500,000 grant for Jonathan’s Dream Reimagined. 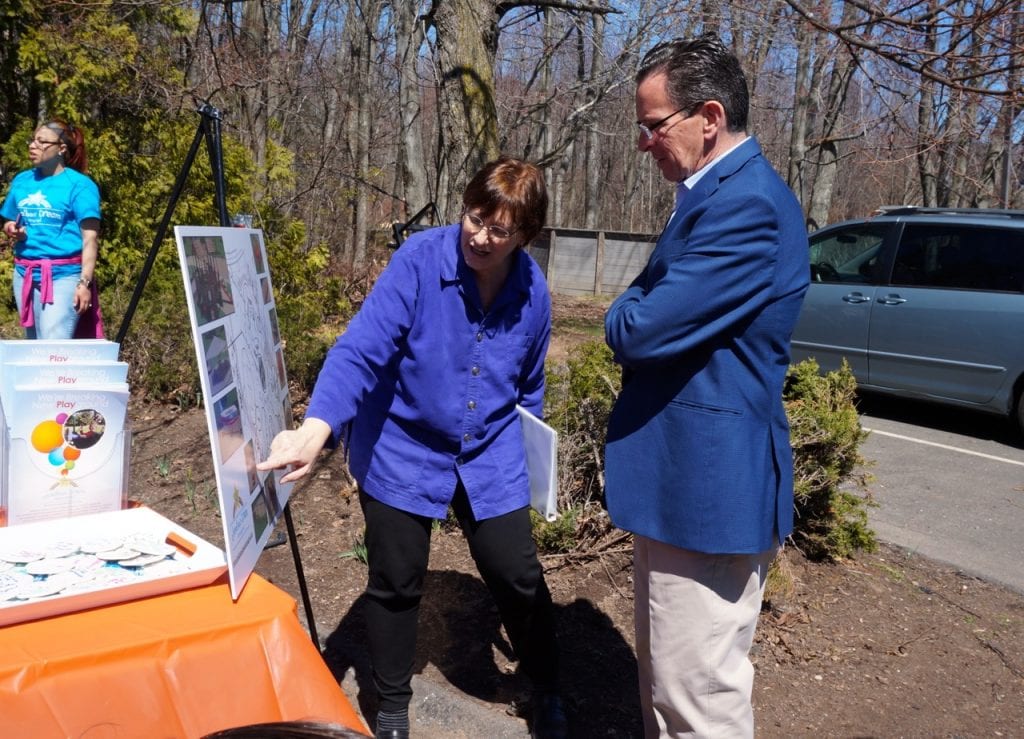 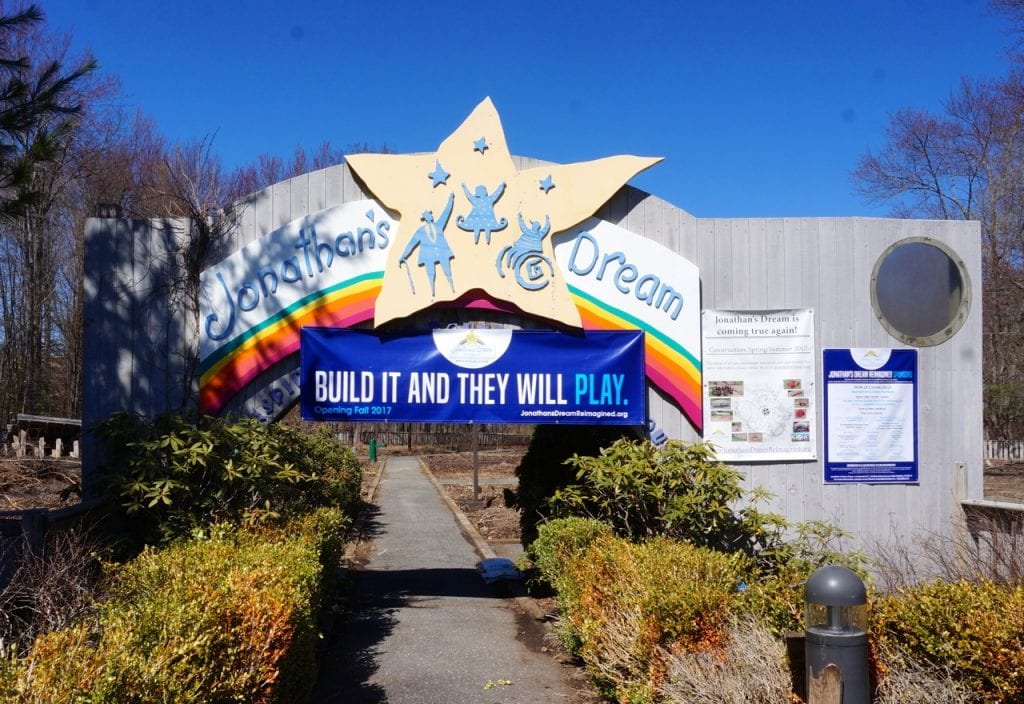 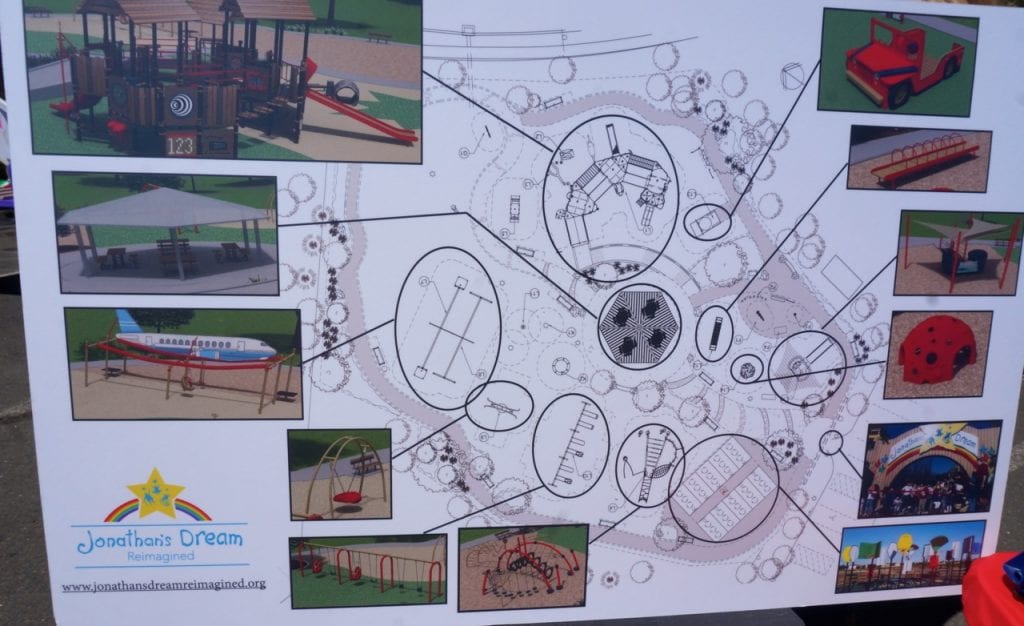 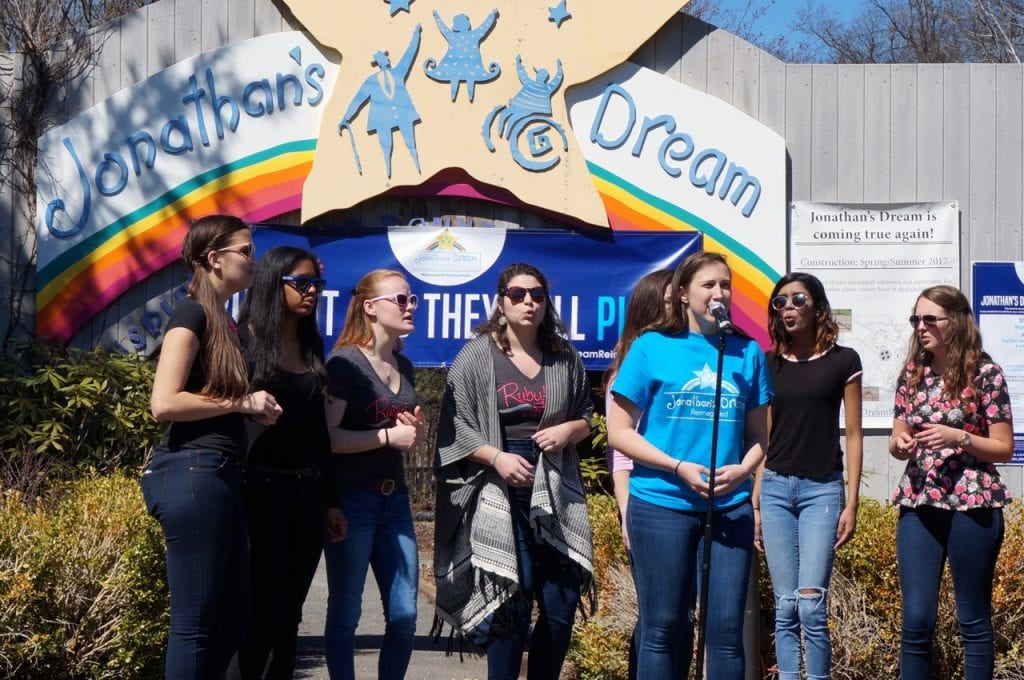 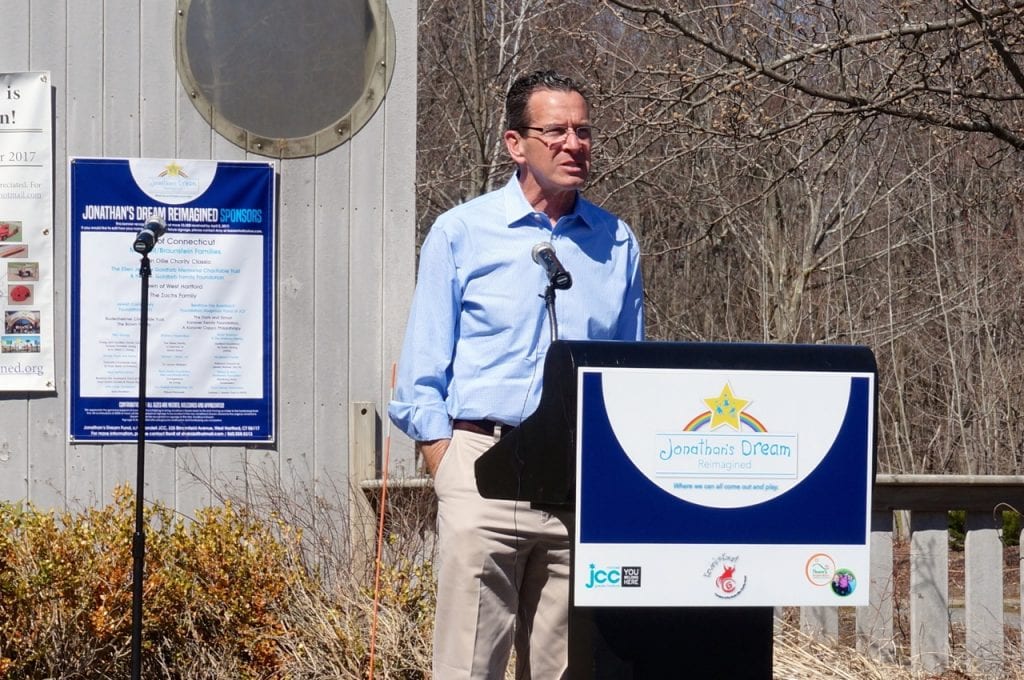 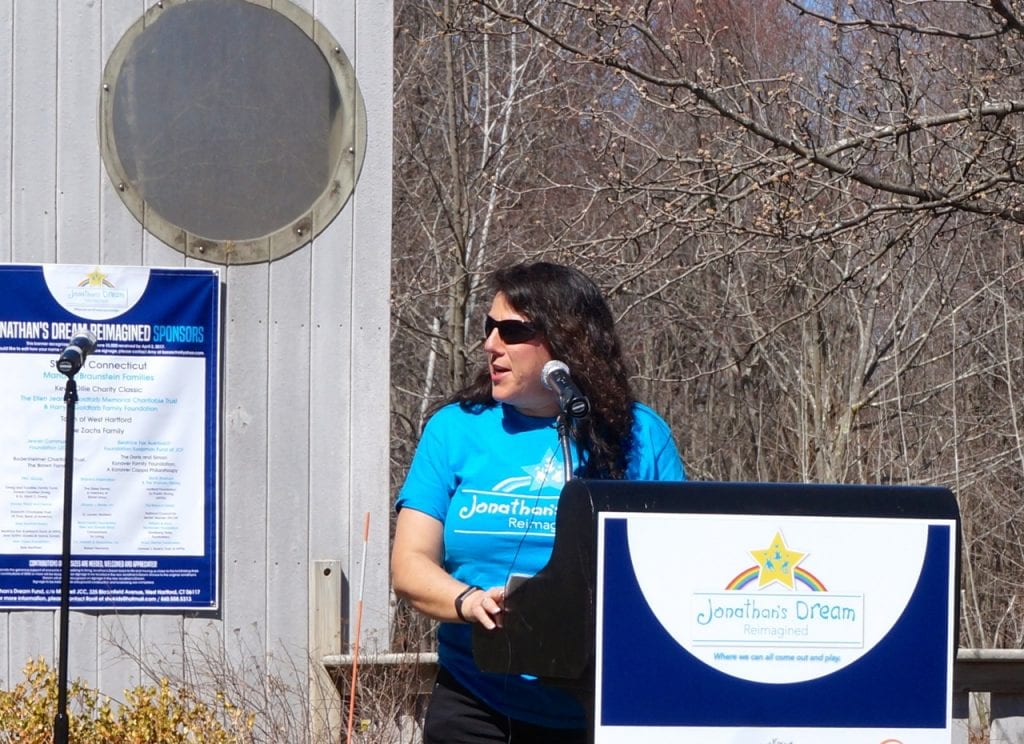 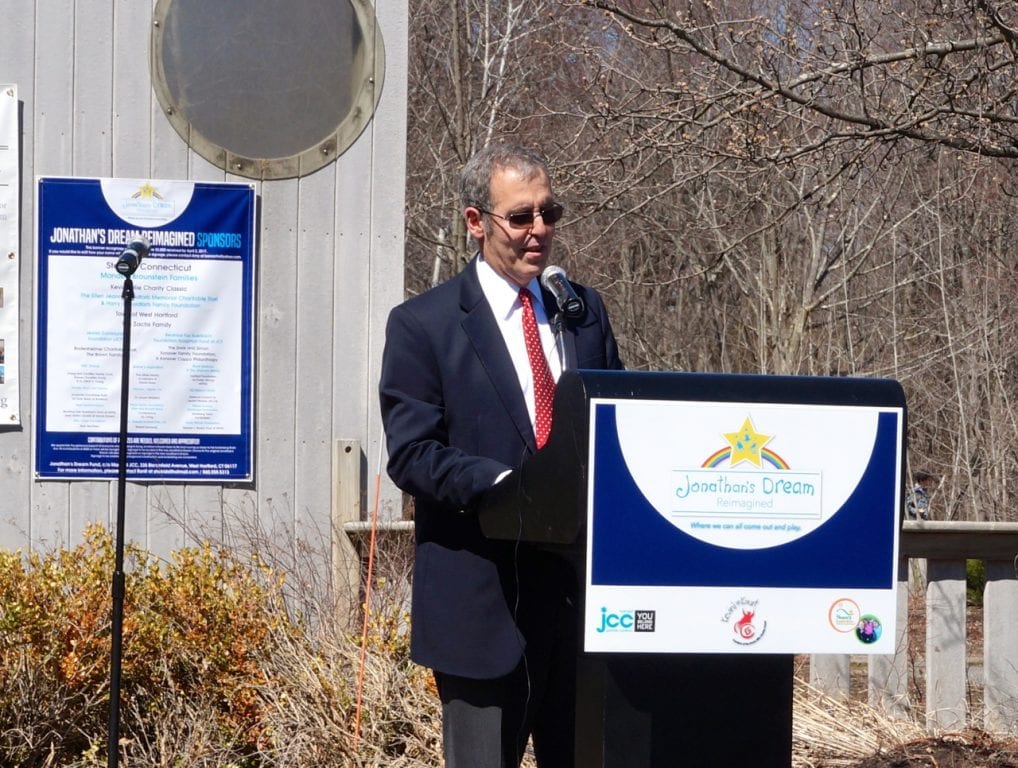 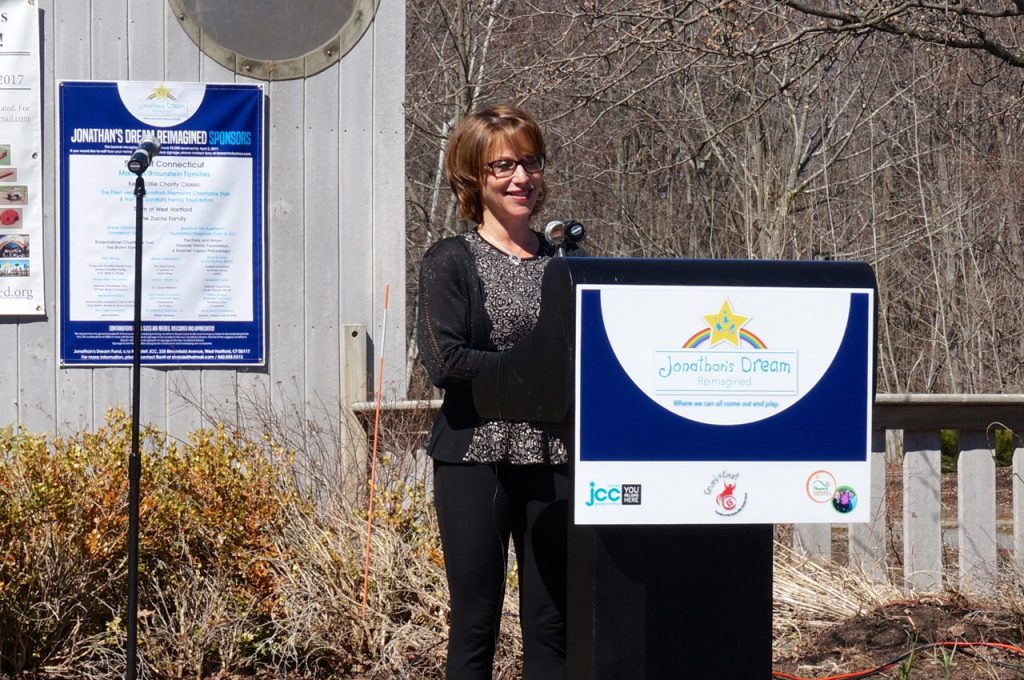 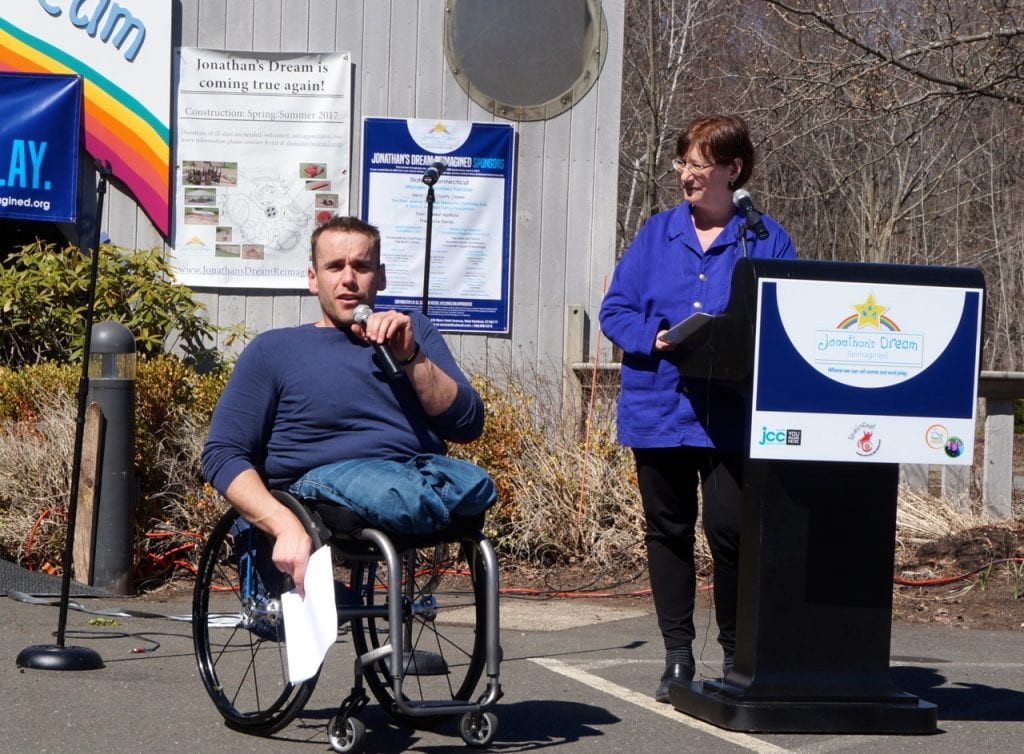 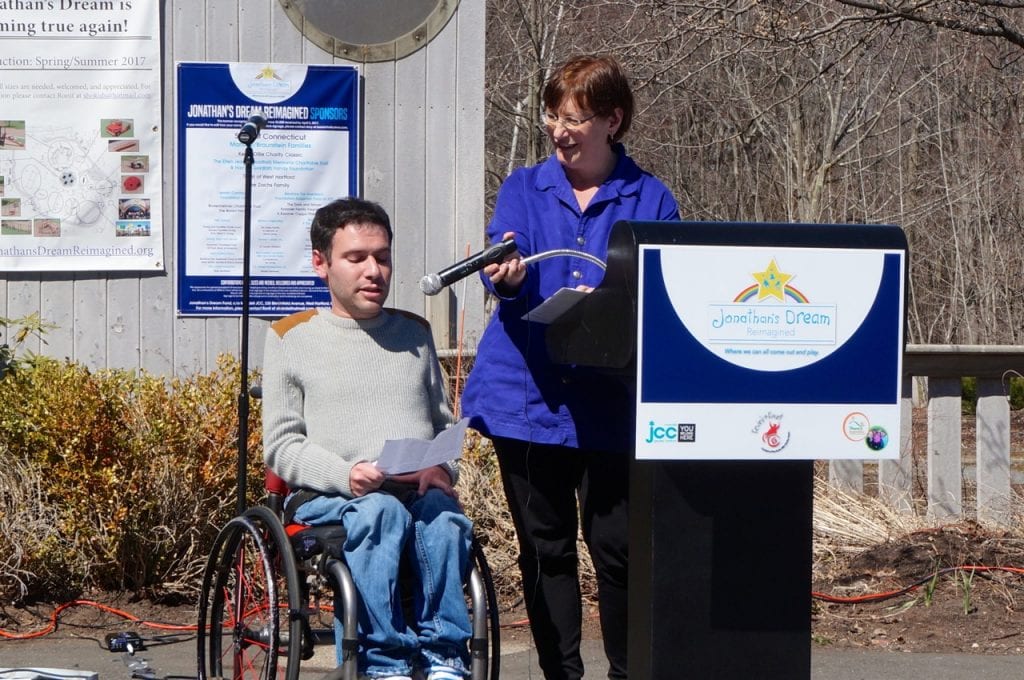 Max Brown is the namesake for “Max’s Jeep,” and said the jeep was his favorite part of the original Jonathan’s Dream. Jonathan’s Dream Reimagined Groundbreaking. April 9, 2017. Photo credit: Ronni Newton 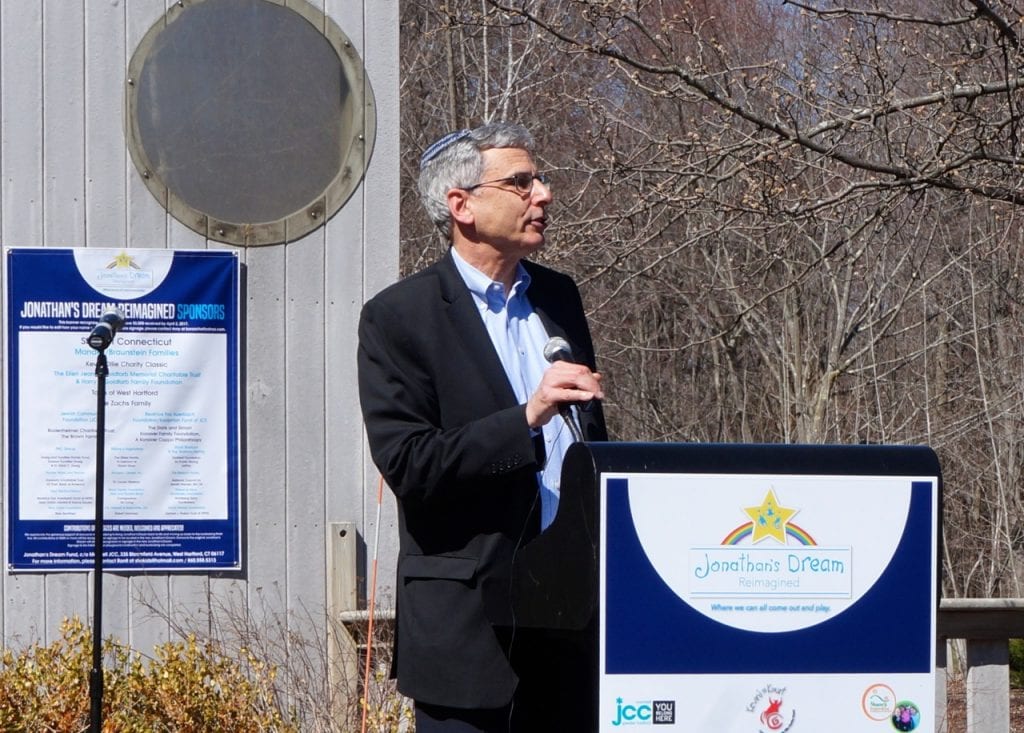 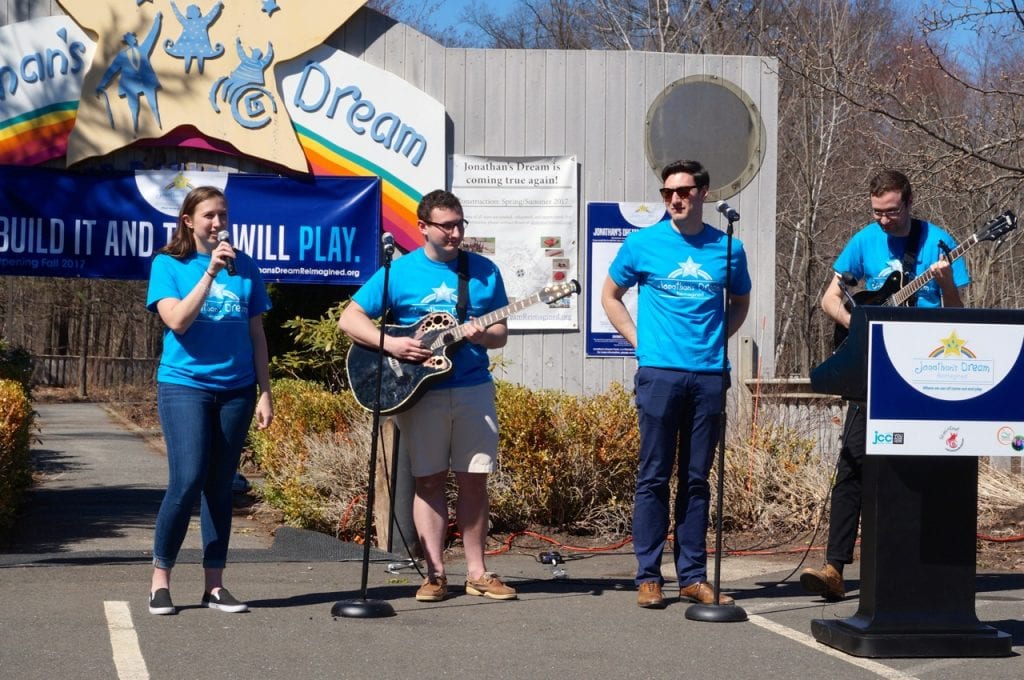 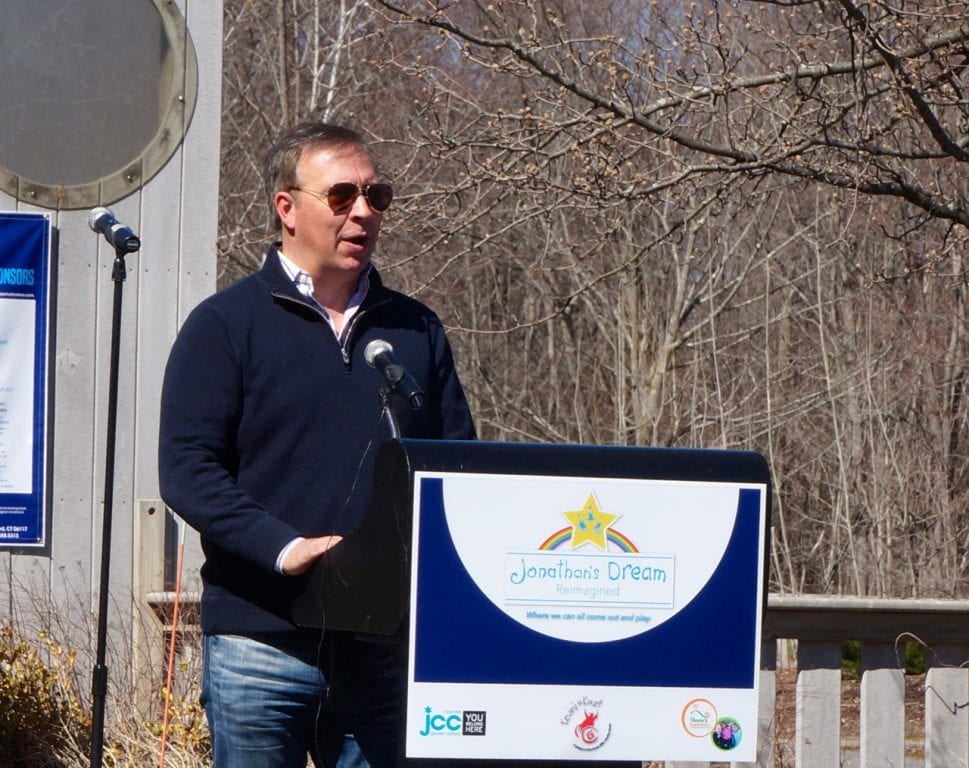 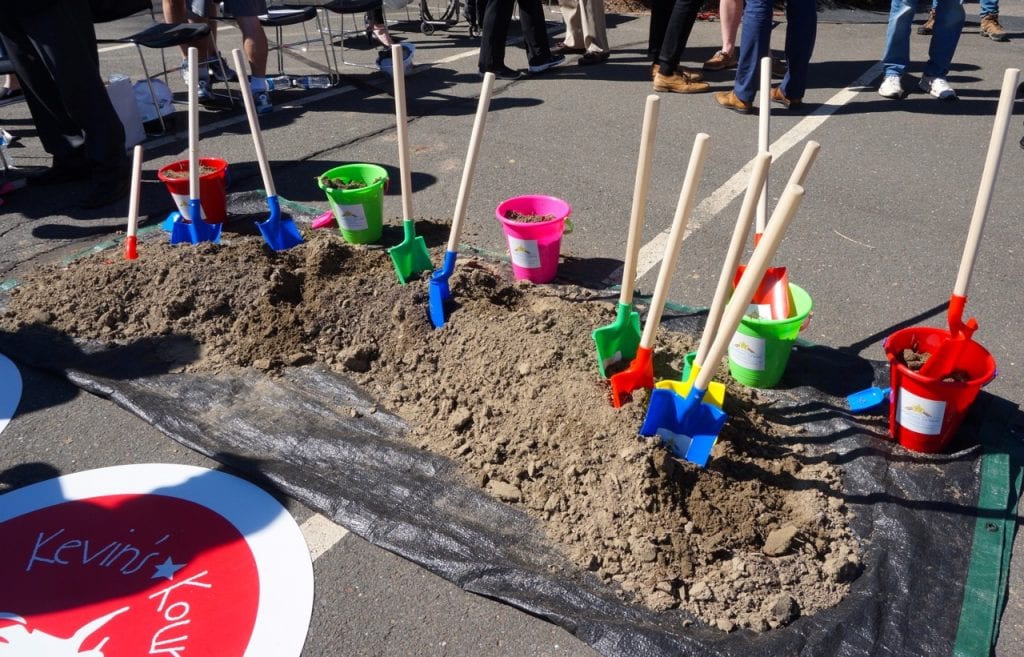 Soil from the old and new playgrounds will be mixed together. Jonathan’s Dream Reimagined Groundbreaking. April 9, 2017. Photo credit: Ronni Newton