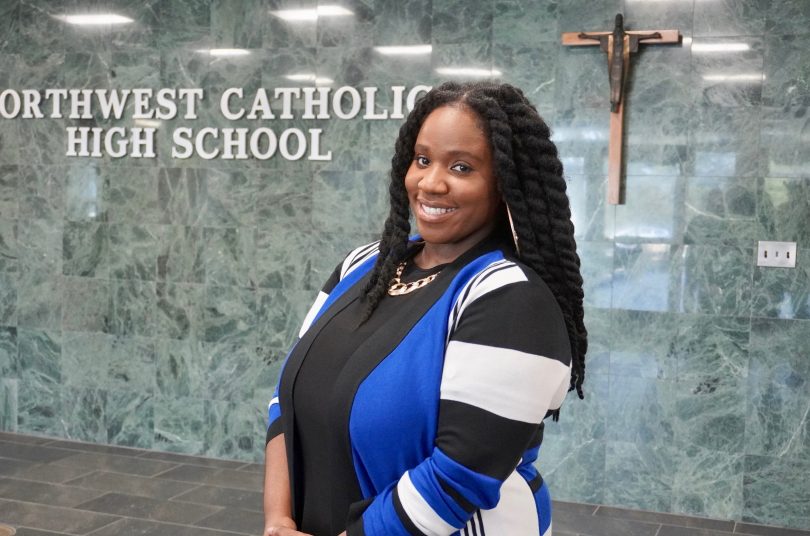 As part of the Black History Month celebration at West Hartford’s Northwest Catholic High School, graduate Kerri Lee Alexander, now a historian, shared information about her own journey, and stories of enslaved women.

Kerri Lee Alexander, a Ph.D. candidate at Howard University and an Education and Public History Fellow at the National Women’s History Museum, wove together heart wrenching slave narratives for her audience at Northwest Catholic. Courtesy photo

Northwest Catholic alumna Kerri Lee Alexander confessed to her audience at her alma mater that a decade ago, when she sat in the same auditorium, she never dreamed that one day she would be the school’s honored speaker.

The brilliant and humble Alexander, today a Ph.D. candidate at Howard University and an Education and Public History Fellow at the National Women’s History Museum, was both delighted and flattered to be at the podium, teaching, storytelling, and inspiring the young minds before her. 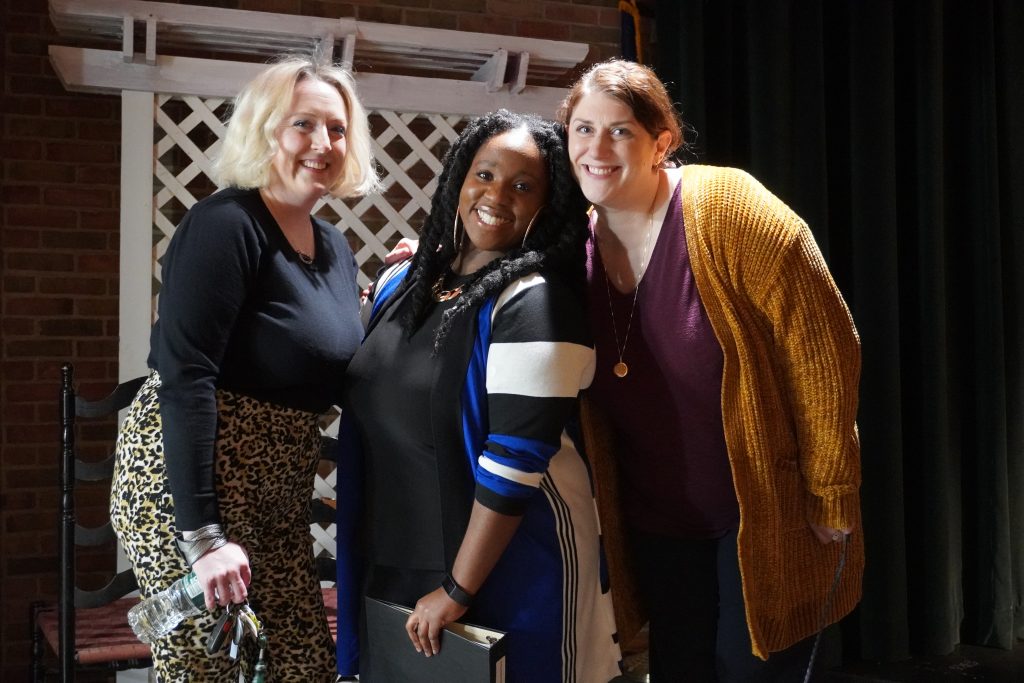 Alexander was active in theater when she was a student at Northwest Catholic. Pictured with Dramateurs Directors Kate Morran and Sara Avery. Courtesy photo

After Alexander graduated from Northwest Catholic in 2010, she headed to Wagner College where she became a student leader and scholar. After earning her bachelors in nonprofit management and arts administration, she attended Princeton Theological Seminary where she earned a masters in theology with a certificate in Black Church Studies. Soon after, she entered a Ph.D. program at Howard University and today is diving deep into the study of women’s enslavement with a projected completion date of 2021.

Active in the theater program at Northwest Catholic, Alexander began to see how the arts reached people. As an undergraduate, she carried this interest into her studies, drawing connections between the arts and social justice. Her penchant for scholarship, nonprofit work, ethics, and justice, and on the advice of influential voices, Alexander pursued a degree in theology where doors continued to open, including a formative experience working as a chaplain for victims of domestic violence.

Through her educational journey, Alexander became increasingly drawn to history. She told the students, “I surprised myself. I didn’t realize I was a such a history nerd!” Alexander explained how she became captivated by the rich, hidden stories of slaves and wanted to go beyond the cursory study of popular figures, albeit hugely important, like Frederick Douglass and Harriet Tubman. Alexander discovered a passion to unearth and share narratives, which is precisely what she did for Northwest Catholic’s students and faculty on the February morning.

In addition to her address to the entire Northwest Catholic community, Alexander spoke with a small group of students, helping them understand the circuitous route her career has taken and illustrated the gifts she has gathered along the way, such as starting a leadership program at Wagner and being her college graduation speaker. Again and again, Alexander spoke of the opportunities afforded her. 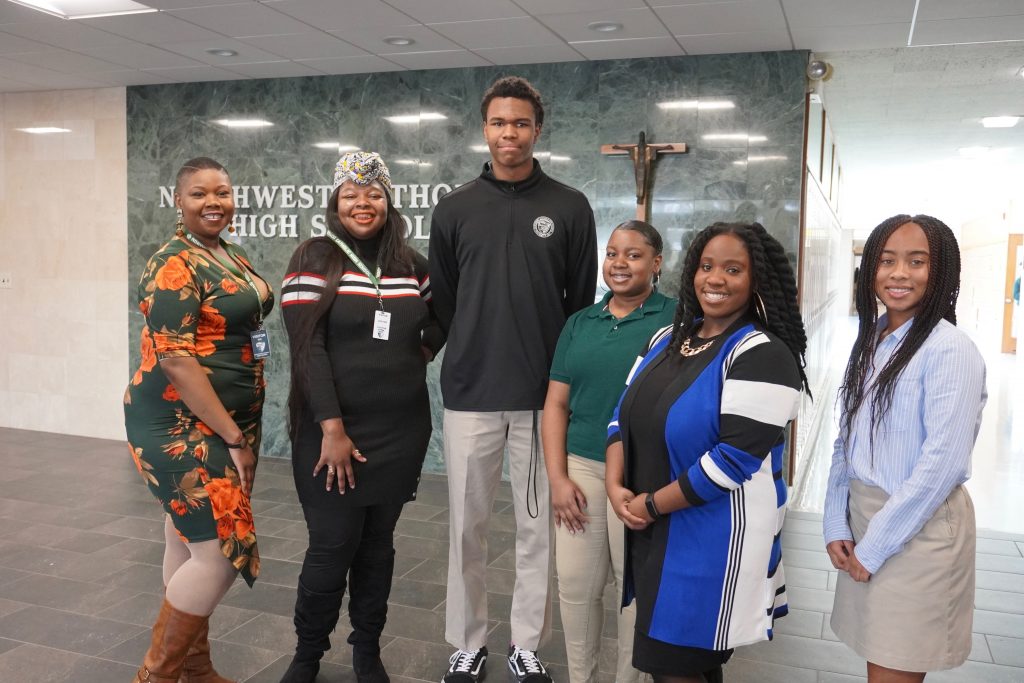 Of course, the teachers at Northwest Catholic who knew Kerri Lee Alexander as a student and Dramateur are not surprised at her many successes. She was always extraordinary. Yet, during her busy morning at Northwest, the modest and grateful Alexander rarely used the word “I.” She spoke of doors being opened and paths laid before her, and her entire lecture was about brave survivors of slavery. She never even suggested look at me: she only said listen to them, as she wove together heart wrenching tales of slave narratives that her audience undoubtedly had not heard of.

Alexander spoke of slaves such as Ona Judge and Margaret Garner, including months and years and family members’ names and details of their escape that brought these brave women back to life. Alexander talked of women slaves’ suffering and sacrifices, without whitewashing the brutality. Alexander was animated and accessible and honest.

Although Alexander is a scholar of the most bleak and brutal stories from American history, she remains full of light. From her enthusiasm for working today with “the most amazing women at National Women’s History Museum” to her enjoyment of teaching her first section of undergraduates in the course “African American Women to 1865,” Alexander radiates hope and happiness. When she asked the students in the small group to share their career dreams, she nodded with affirmation, repeating, “We need you. The world needs you.”

And like so many alumni visitors before her, Kerri Lee Alexander told the intimate group of soon-to-be fellow alumni, “Call me if I can ever do anything for you. You know we’re family, don’t you?” 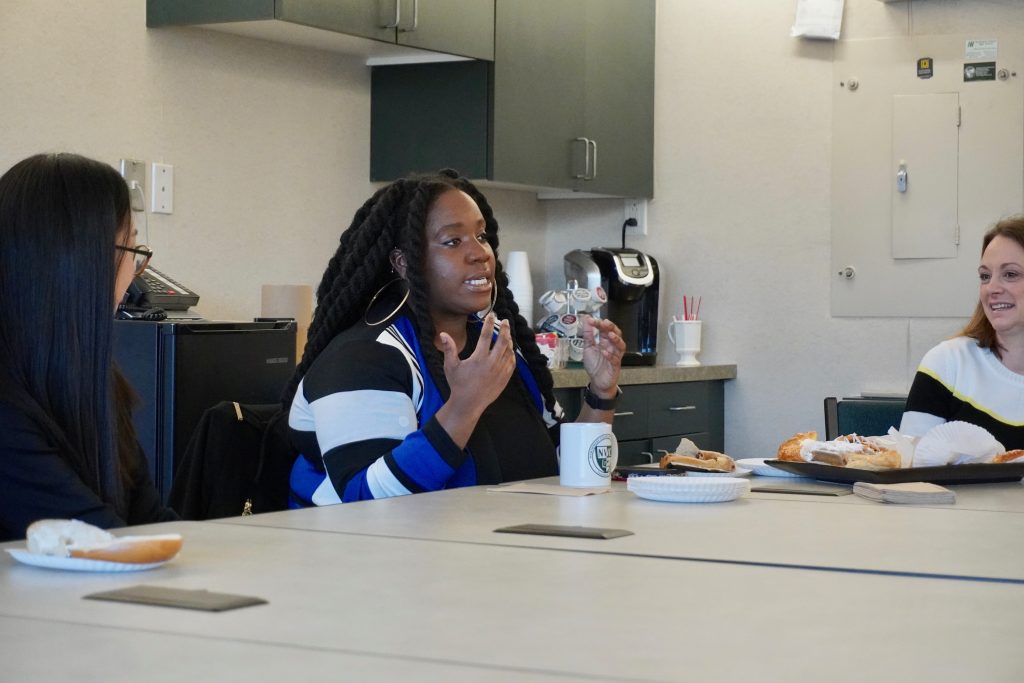 Kerri Lee Alexander meets with a student group during her visit to campus. Courtesy photo