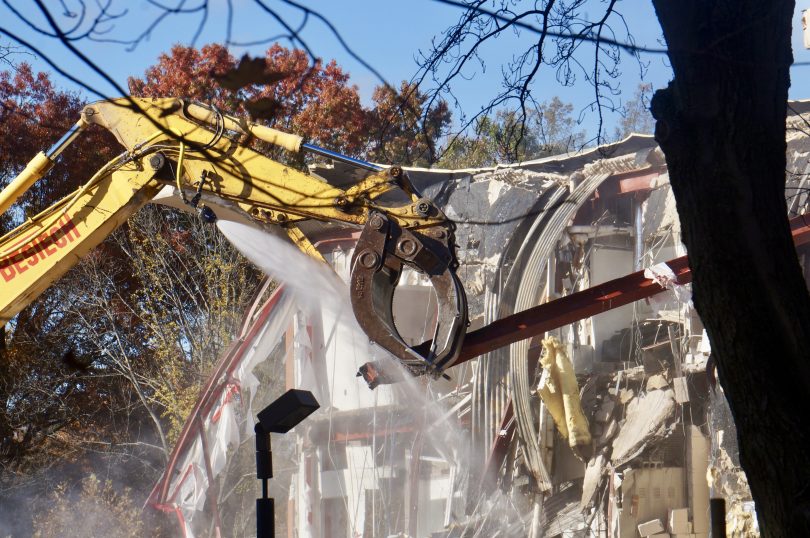 A contractor hired by Ideanomics has started demolishing the former UConn School of Social Work building. 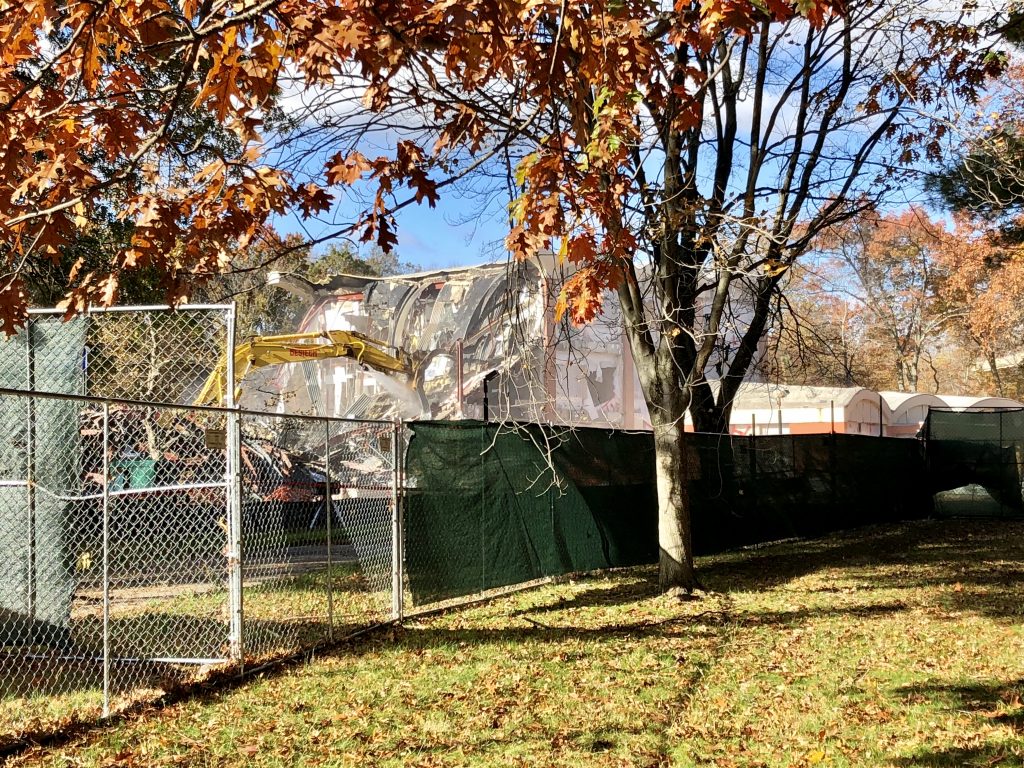 In a fenced-in area at the northwestern end of the former UConn West Hartford campus, an excavator with a giant claw is being used to demolish the School of Social Work building. Photo credit: Ronni Newton

The walls – and roof, and steel supporting beams, and every other part of the structure – are tumbling down on the former UConn School of Social Work building in West Hartford, as an excavator with a giant claw is creating the most visible sign of progress to date as the remediation of environmental hazards on the former West Hartford campus gets underway.

Demolition is an early step in the overall process of repurposing the campus.

Ideanomics, which purchased the 58-acre former UConn campus “as is” for $5.2 million last October, intends to build Fintech Village – $400 million center for global technology and innovation – on the property.

Abatement of asbestos and polychlorinated biphenyls (PCBs) has been taking place on the site for some time, Alf Poor, the CEO of Ideanomics and president of Fintech Village, told We-Ha.com earlier this month, and he noted that the contractor was nearly ready to begin demolition of the School of Social Work, followed by three other buildings. Only the IT building, which is much newer, will be left standing. 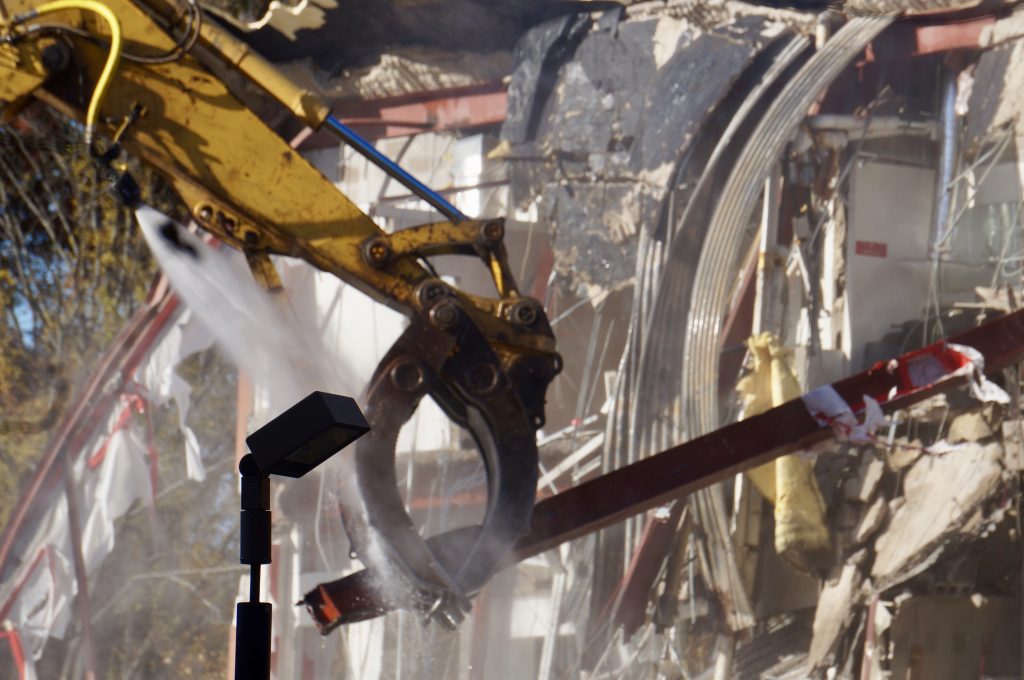 “The thoughtful way to remediate was to take the buildings down,” said Poor, adding that the contractor would be taking extra steps to ensure the process was handled as carefully as possible including using water to suppress the dust. “It’s the most efficient and cleanest way to get this land remediated for residents, but it’s not the cheapest for us.”

In a letter sent to neighbors in the Asylum Avenue/Trout Brook Drive area dated Oct. 18, Poor said that the former Undergraduate Building would be taken down next, followed by the former Library. Demolition of the former Library building, which fronts Asylum Avenue, will be most visible to passersby but won’t begin until after the asbestos abatement in that structure has been completed late next month.

According to Ideanomics, the demolition work, which is being done by Connecticut-based Bestech, Inc., will take place Monday through Friday, between the hours of 7 a.m.-3:30 p.m. On occasion, “but not often,” the contractor may work until 5 p.m., or on a Saturday, Poor’s letter stated. 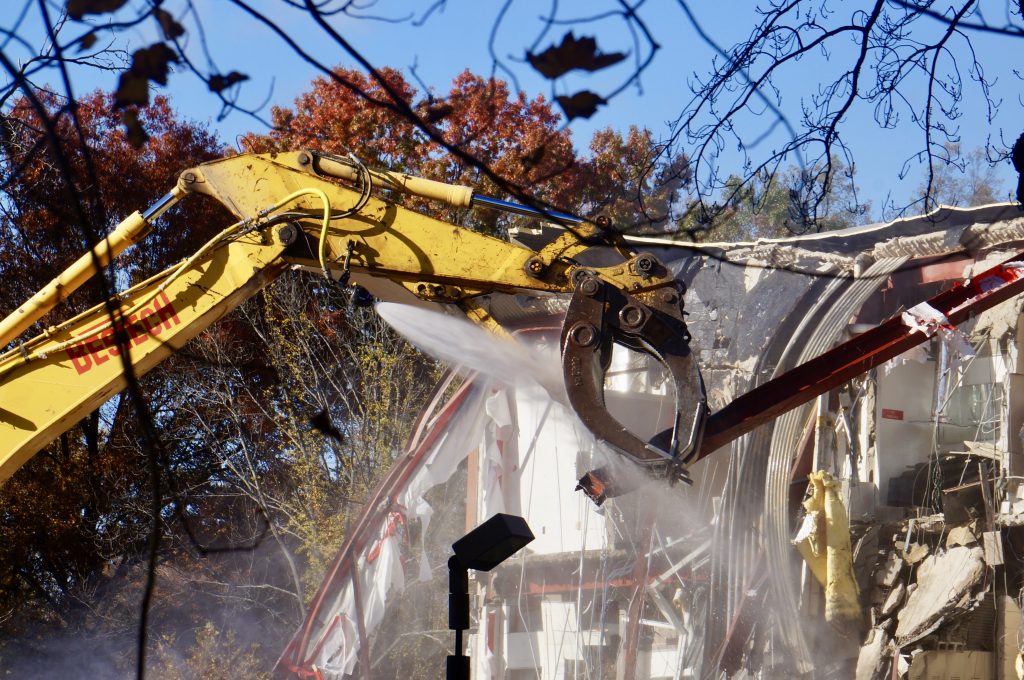 “To suppress dust, buildings will be soaked with water prior to demolition,” Poor’s letter states. “Additionally, there will be two dust suppression machines engineered and built to hold down dust during the operation. These machines spray a large volume of water in front of a large fan that is directed at the area to be demolished. Lastly, the excavator performing the demolition will have its own spray nozzle affixed to its arm to spray water and suppress dust as it works.”

The PCBs – used in the caulking and weatherproofing of windows as was common in the era in which the buildings were constructed – that have leached into the soil and foundations, that were discovered during environmental testing, will be remediated following demolition, but before the foundations are dug up, according to the letter. The remediation work is being conducted according to guidelines set by the Connecticut Department of Energy and Environmental Protection (DEEP) and the U.S. Environmental Protection Agency (EPA).

Poor also noted that Ideanomics is very excited to move forward “from blueprint to reality” in the process of creating Fintech Village, and said the company is anxious to move forward with the zoning and permitting.

“The first step will be to seek local zoning approval to create a ‘Technology Village District’ zone – updating the town’s current ‘Business Office Laboratory’ zone,” followed by applications for developing and operating the campus, Poor said in his letter.

“We will work collaboratively with the town’s planning officials throughout the entire permitting and development process. The process to secure the approvals for Fintech Village will be public, thorough and deliberative – and the town will set the manner and timeline of the processes we will follow,” Poor said.

Poor said previously that Fintech Village will create hundreds of new jobs, or even more, in a high tech industry that will be a major boon to the town, the state, and the region.

Anyone with questions about the project can reach Poor or other members of the project teach via email at [email protected]. 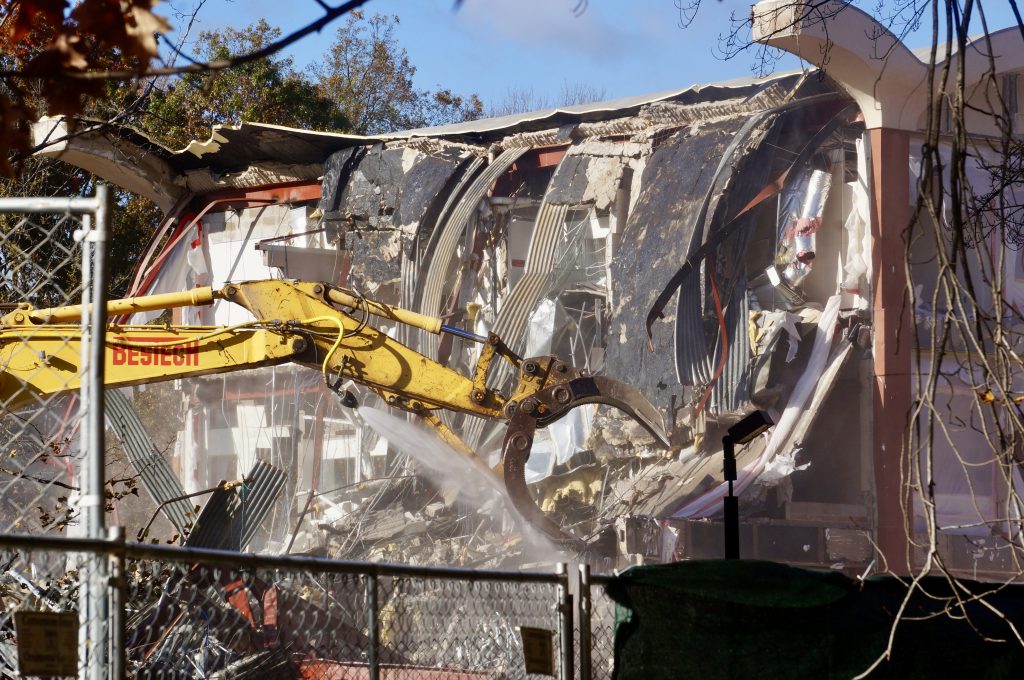 In a fenced-in area at the northwestern end of the former UConn West Hartford campus, an excavator with a giant claw is being used to demolish the School of Social Work building. Photo credit: Ronni Newton