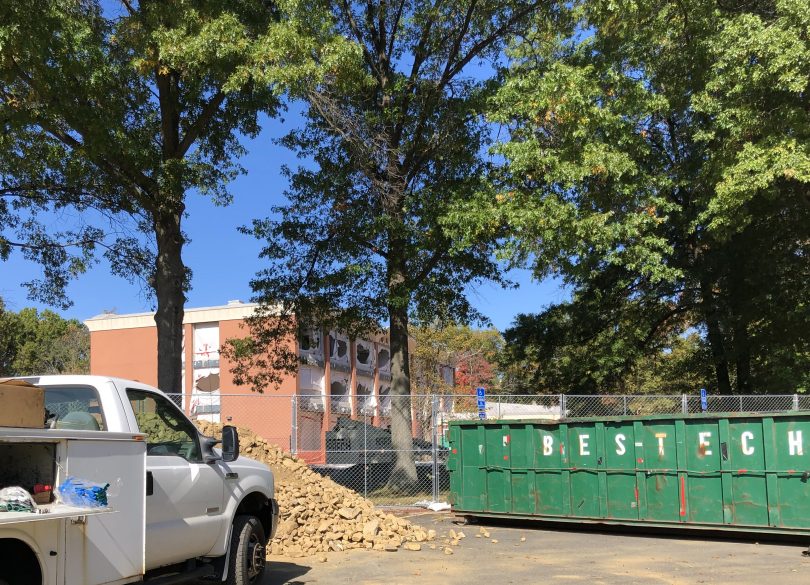 Remediation work is nearly complete on the former UConn School of Social Work building and it will be demolished soon. Photo credit: Ronni Newton

Alf Poor, CEO of Ideanomics, sat down with We-Ha.com to provide updates on the project, and said remediation of buildings on the former UConn West Hartford is well underway and detailed plans will be submitted this fall. 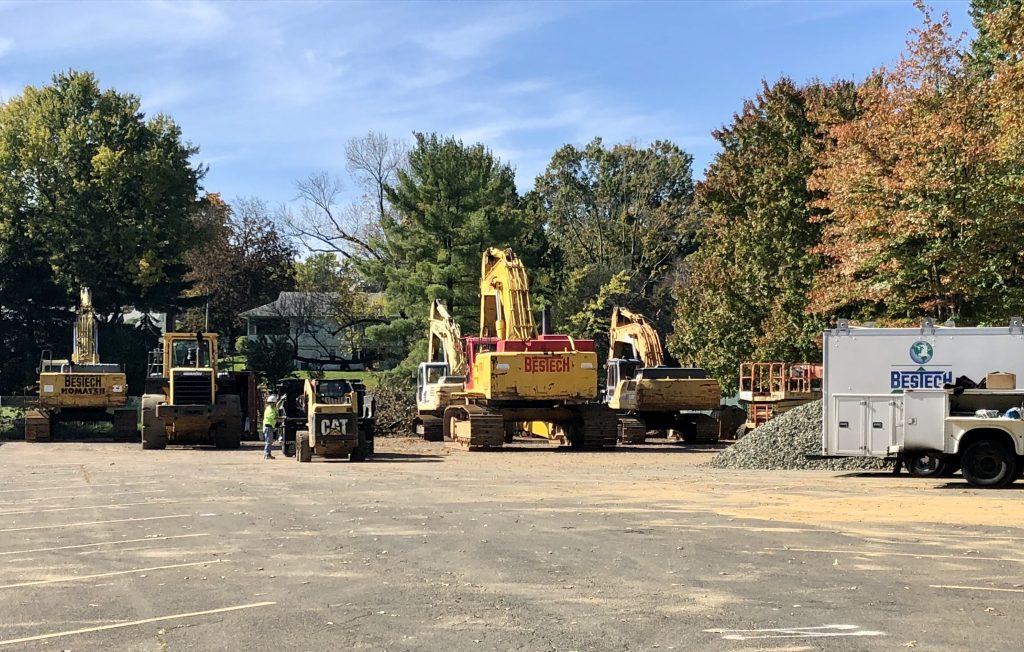 Remediation contractors at work behind the former UConn library.

The CEO of Ideanomics is more excited than ever about the plans for Fintech Village being built in West Hartford.

“We’re ending the year with heightened optimism and knowledge of the path we’re on,” Alf Poor told We-Ha.com in an interview Tuesday. 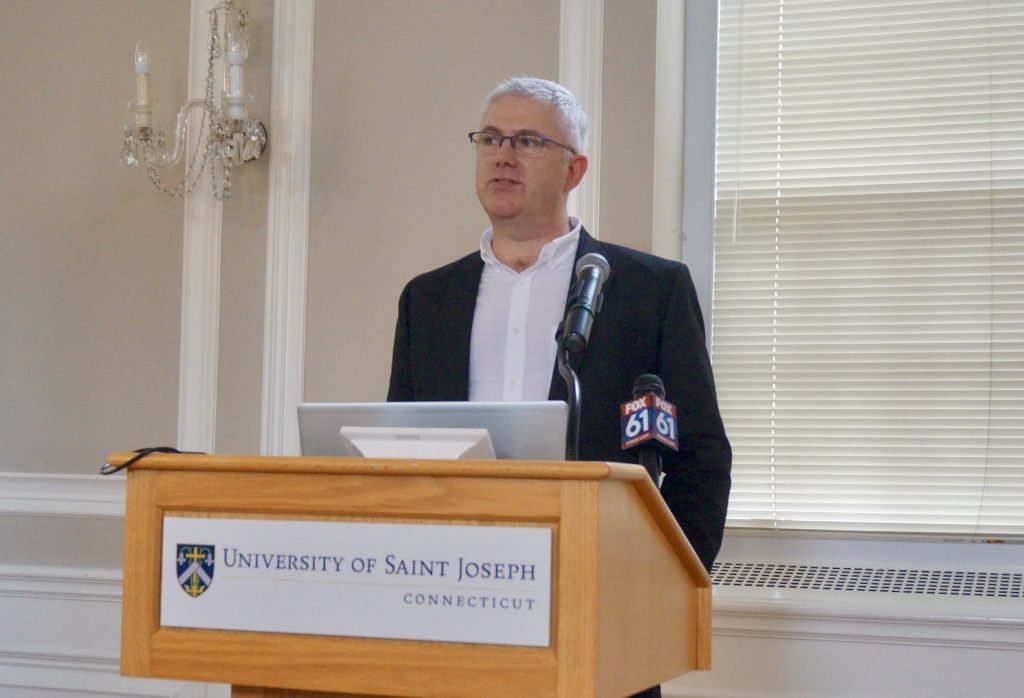 Poor, the CEO of Ideanomics as well as the president of Fintech Village – the $400-plus million dollar global center for technology and innovation that the company plans to build on the site of the former UConn West Hartford campus – said detailed site plans will be submitted to the town this fall, including a request to have the zoning for the parcel changed. Currently the 58-acre property is zoned single-family residential.

The architectural plans, Poor said, have been modified somewhat from the renderings released during a celebratory press conference in July.

“The height of some buildings will be reduced,” Poor said. “We are taking into consideration the input of neighbors” that was received during an outreach process throughout the summer. The company will be sensitive to concerns about traffic as well as potential problems with wet backyards raised by neighbors.

The art museum, public art installations, and other public amenities are still part of the project, Poor said.

It’s not really visible to casual passersby, but abatement of asbestos and PCBs has been taking place on the site, and the School of Social Work will be demolished very soon, followed by three other buildings. Only the IT building, which is much newer, will be left standing.

“The thoughtful way to remediate was to take the buildings down,” said Poor.

“We are taking extra steps for remediation,” Poor said, including using water to suppress the dust. “It’s the most efficient and cleanest way to get this land remediated for residents, but it’s not the cheapest for us.”

The company doing the remediation has been “stellar,” Poor said, as has the Town of West Hartford.

The entire process has been full of surprises, however, including the discovery that the power to the IT building at some point had been jury-rigged from the library – something that only became apparent when power was being turned off during the remediation in preparation for demolition.

“That’s why there’s lights-out now,” Poor said, including on the walkways throughout the campus. 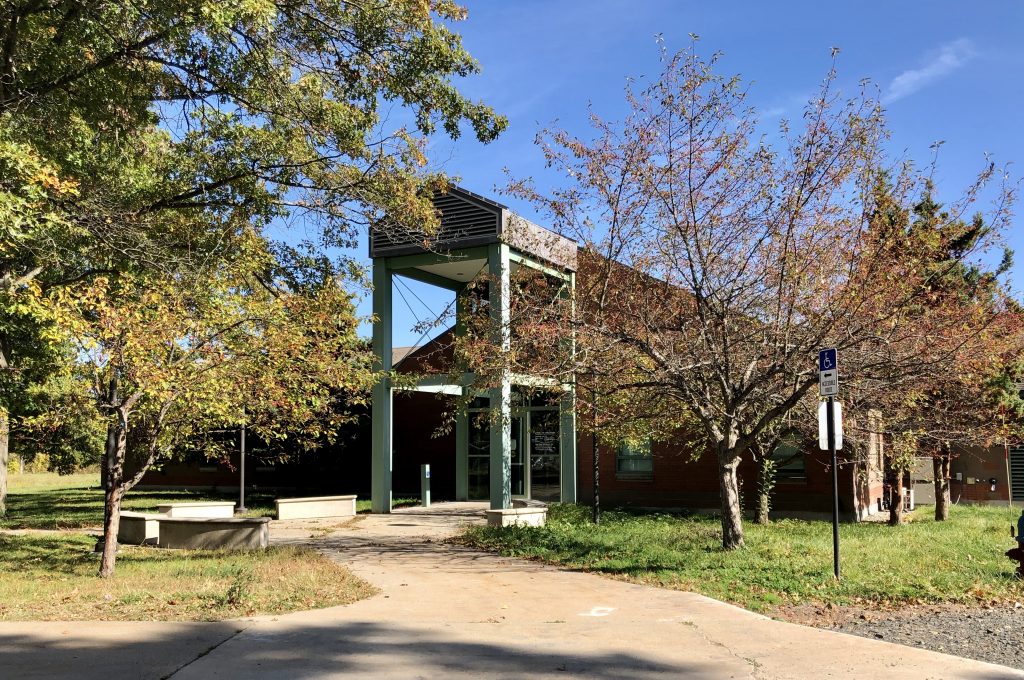 The former UConn IT building will remain, but it currently is without power. Photo credit: Ronni Newton

Ideanomics was planning to approach the town requesting permission to utilize the IT building, for which it has a tenant lined up, but that can’t happen until it gets re-wired. Poor hopes power can be restored before the building needs to be winterized.

Poor is confident that the company has passed many of its toughest hurdles, not only with the remediation but also including a disagreement with the state regarding a $10 million incentive for job creation promised by the Malloy administration, and a requirement for bonding for the remediation, which is costing multiple times more than anticipated.

It may be lights-out now throughout the campus, but Poor said he, and company chairman Bruno Wu, can now see the light at the end of the tunnel.

“We feel better than we have since the announcement of the purchase since now we know what we are dealing with,” Poor said. “Now the forward planning is back underway.” 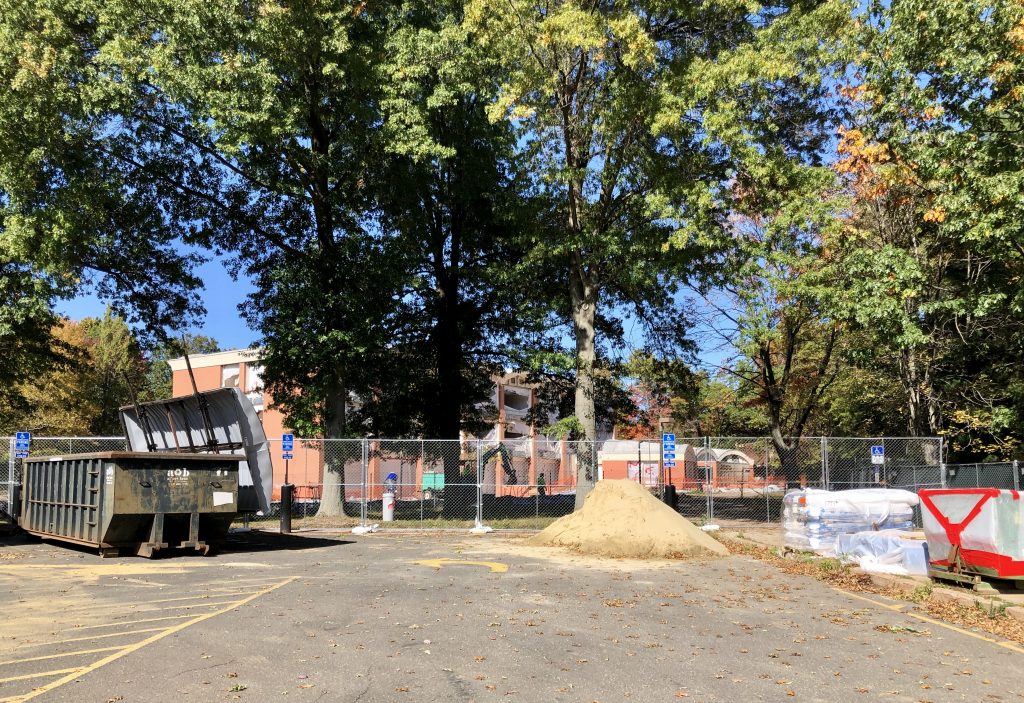 Remediation work is nearly complete on the former UConn School of Social Work building and it will be demolished soon. Photo credit: Ronni Newton

Last year the company was facing what Poor called the “dark cloud of remediation,” and while the work is costing the company much more than anticipated, there remains great excitement about having Fintech Village in West Hartford.

Once the buildings are down, and the approval process with the town is underway, Poor said the major concerns will be phasing the construction of new buildings and bringing them online in a way that continued construction on other structures won’t be an impediment to the completed ones.

Agreements are in place with businesses from throughout the world – some as letters of intent, and others in less formal terms – to locate in Fintech Village, Poor said.

West Hartford, located halfway between financial centers in New York and Boston, is an ideal location for this project.

“They need high-speed data centers, and this looks like an excellent corridor,” said Poor, who is headquartered at the Ideanomics offices in New York. West Hartford is also “nicely placed between Europe and the West Coast – where fintech and the industry are going.

Ideanomics currently has activities taking place in Israel, the U.K., Ukraine, China, “but having it so fragmented is difficult,” Poor said. There is so much regulation surrounding the fintech industry, he said, that it’s a major stumbling block to the success of many start-ups.

There’s currently a team in Ukraine working on a blockchain project, but they really need to understand the regulatory environment to operate in the U.S.

“For us, moving these people. here, giving them access to the regulatory authorities” will make a major difference, said Poor.

While Ideanomics plans to break ground in 2020, “Fintech Village will not make money in 2020,” Poor said. “This is a long-term investment.”

The project carries the weight of Wu’s expectations, and Wu, a Chinese-American billionaire, wants things to happen yesterday, but Poor is more of a realist. He said that the project has moved along faster than others would have, thanks to Wu.

“I don’t want to kill what’s a gift to us – Bruno Wu,” Poor said. Wu’s support and his vision will fuel the success, and in the past 12 months since Ideanomics closed on the property, purchased “as is” for $5.2 million, what many people don’t see is “many miracles have happened.”

Poor sees a bright future for the company, and for the state.

The number of jobs created by Fintech Village – well above the 330 that are part of the state’s incentive package – will be amazing for Connecticut, Poor said.

A history of UConn’s decision to sell the campus, through the announcement in July 2018 that Ideanomics (then known as Seven Stars Cloud Group) would purchase the property for $5.2 million, can be found here.