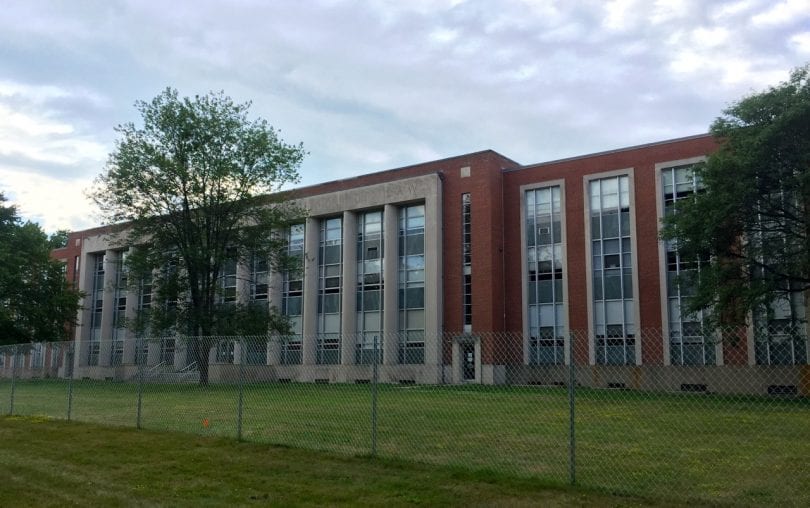 The former UConn West Hartford library was to have been renovated, but demolition is the only way to effectively remove all of the environmental contaminants. Photo credit: Ronni Newton (we-ha.com file photo)

Ideanomics CEO Alf Poor said Friday that he has finalized an agreement with the state, and the West Hartford project is back on track. 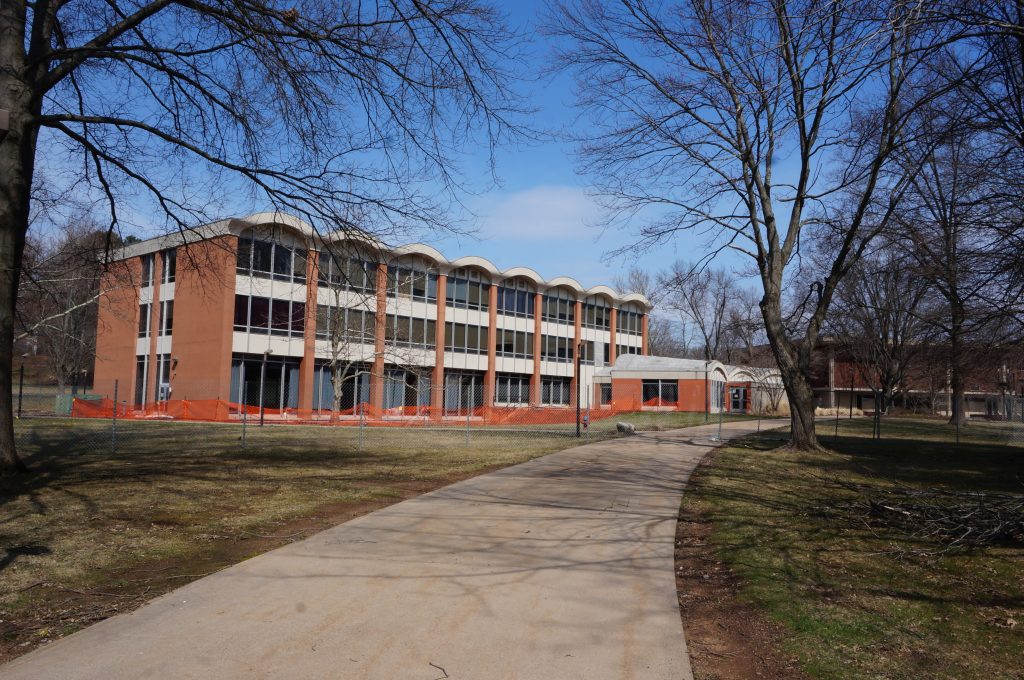 The former UConn West Hartford campus will soon look dramatically different, as Ideanomics moves forward with its plans to create Fintech Village, a global center for innovation on the 58-acre site.

Contractors will be applying for permits immediately, Ideanomics CEO Alf Poor told We-Ha.com Friday, and he is hopeful that remediation of PCBs and other environmental hazards – to be accomplished along with the necessary demolition of all but one of the buildings on the former campus – will begin by mid July. 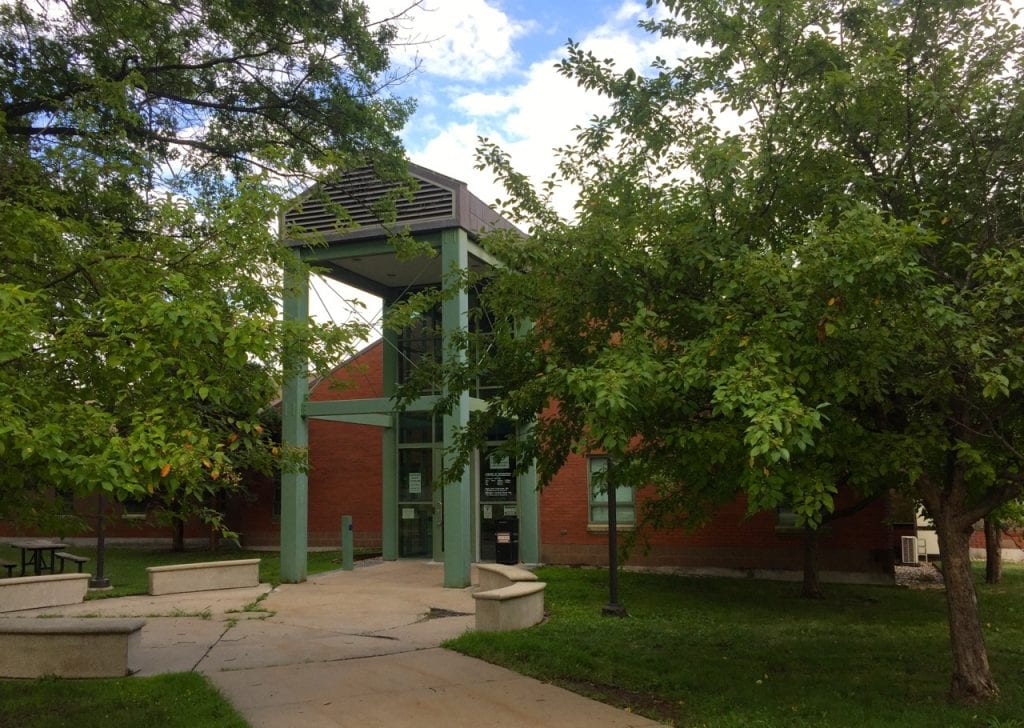 Ideanomics had been planning to demolish two of the five buildings – a small cinderblock mechanical building and the former School of Social Work building – while renovating the former library and undergraduate building. The former UConn Extension/IT building, which which is much newer, will remain.

Several weeks ago, plans had temporarily stalled when Poor sent an email to the vendors working on the project instructing them to halt work immediately, noting that there were “regrettable and irreconcilable differences with the state of Connecticut” that could impact the project’s viability.

State Sen. Derek Slap, West Hartford Mayor Shari Cantor, and other officials stepped in, opened up conversations between Ideanomics and Gov. Ned Lamont’s administration, and on Friday Poor told We-Ha.com that the company “concluded an agreement with the state today and will be getting back on track.”

Ideanomics, formerly known as Seven Stars Cloud Group, announced its intentions to purchase the bucolic 58-acre former UConn West Hartford campus, which includes five buildings, in July 2018, and closed on the $5.2 million deal on Oct. 10. The company agreed to purchase the property “as is,” and assume responsibility for remediation of the contamination which occurred when the state owned the property and constructed the buildings for UConn.

As part of the deal, then-Gov. Dannel Malloy’s administration offered a $10 million loan through the governor’s First Five Plus program for capital renovations, which can be forgiven if the job creation targets are met. Ideanomics has stated the intention of investing an estimated $283 million, and the creation of at least 330 jobs over the next five years.

In addition, Poor said, there was a verbal agreement with the Malloy administration regarding remediation costs so that “if things went north of what was expected we could have a conversation” since the state had not permitted the company to do its own environmental assessments prior to the sale.

“We took a leap of faith,” Poor said.

Once Ideanomics completed its environmental assessment of the property, Poor said, the estimated remediation costs were several million dollars higher – about double what had been initially anticipated.

In a letter to UConn President Susan Herbst dated June 21, Gov. Lamont said that Ideanomics had asked his administration for assistance. “The Department of Economic and Community Development (DECD) has been working diligently with Ideanomics to explore whether there might be any creative solutions that would provide such economic assistance while minimizing any costs or risks to the state,” Lamont wrote in his letter.

The solution, which was agreed to by UConn’s Board of Trustees on Wednesday and finalized Friday, was to substitute a performance bond for the surety bond, allowing Ideanomics to use the nearly $4 million collateral to finance the environmental remediation, allowing that work to commence in July.

“The clean-up and subsequent redevelopment of the property will further our economic development efforts and return the property back to productive use. Moreover, Ideanomics’ proposed Fintech Village on the cleaned site could be transformational for the state and the regional economy,” Lamont’s letter states. Ideanomics will still be contractually obligated to remediate the site.

Poor said Friday that there is “effectively no way to save” the two buildings that the company initially planned to renovate due to the amount of contaminants they contain. Ideanomics is now faced with additional costs of demolition as well as complete new construction, but it will allow for a faster and more effective clean-up of the PCBs.

“That’s good news for the neighbors. The commercial waste will be processed in one batch, and it will be quicker,” Poor said. Once the buildings have been taken down and the environmental clean-up has been completed, final testing of the site will be done to ensure the clean-up has been done to required standards.

The visible change to the landscape will be dramatic, as only the small IT building will remain standing.

“We do get to do new construction,” said Poor. There was initially some concern about how to retrofit decades-old buildings with modern infrastructure to support Fintech Village’s high-tech needs, and that will no longer be an issue.

Poor said that formal plans for the new construction will be submitted once the clean-up is complete. He doesn’t yet have a timeline, but said, “We will break ground as soon as we can.”

Everyone – including the companies which have interest in locating at Fintech Village – has been in a holding pattern awaiting resolution about how the remediation would be handled. While the delay has been a headache, there is now a plan in place, said Poor.

“From the town, to Derek Slap, they have all been very supportive, outstanding partners,” Poor said. He is also thankful to Gov. Lamont’s administration for listening and understanding the situation, and working to find a solution.