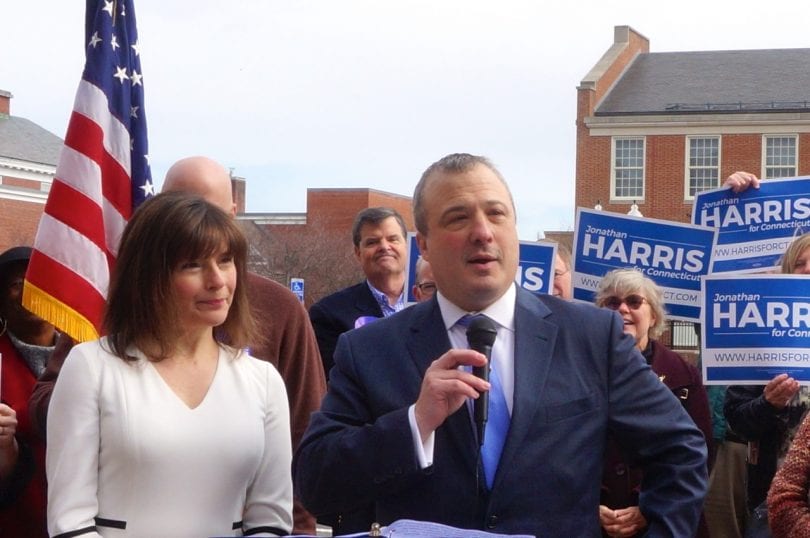 West Hartford resident and former mayor Jonathan Harris, with his wife, Lucy, at his side, made an announcement Feb. 24 that he would run for governor of Connecticut in 2018. Photo credit: Ronni Newton

Jonathan Harris, a former mayor of West Hartford who has also served as executive director of the state’s Democratic party and commissioner of the Department of Consumer Protection, announced Saturday that he officially plans to run for governor. 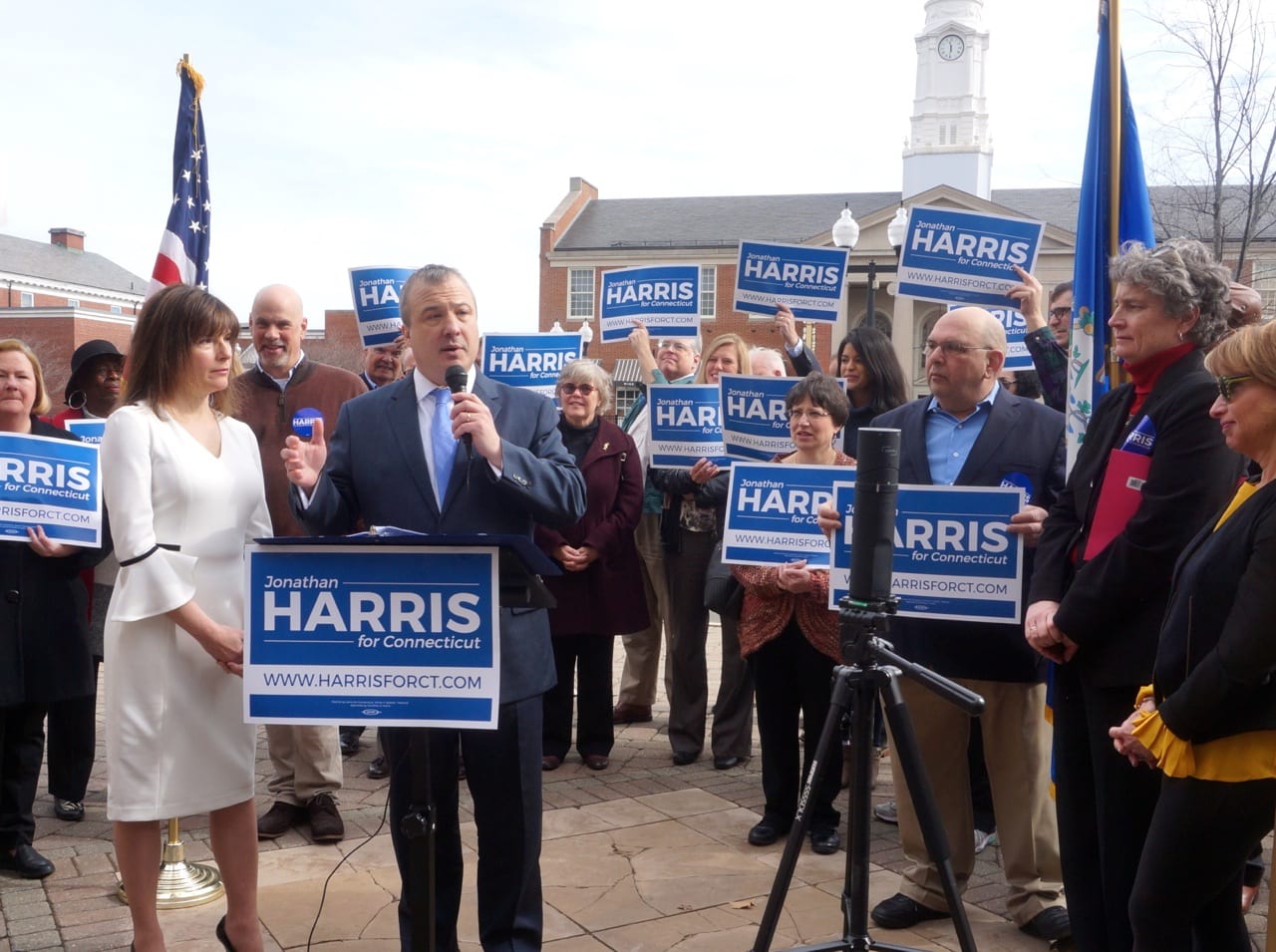 Jonathan Harris made it official, and announced Feb. 24 in West Hartford that he will run for governor in 2018. Photo credit: Ronni Newton

Jonathan Harris said he isn’t about to give up on Connecticut, and believes that his experience as a progressive and collaborative problem-solver who has proven his ability to deliver results makes him the ideal candidate to be elected governor in November.

Speaking before a crowd of approximately 200 who gathered on Saturday morning in West Hartford Center, Harris, 53, who formed an exploratory committee in April 2017, made his plans to run for governor official.

“Tikkun Olam,” he said. The term that is Hebrew for “repair of the world” was taught to him by his parents and grandparents, Harris said, and has guided his ideals that “when something is wrong you try to fix it” while at the same time “treating everyone with dignity and respect.” He said it’s something he strives for daily and it was the underlying theme of his announcement speech.

“This has truly been an exploratory effort,” Harris told the crowd. Since April he has criss-crossed the state and has received “more contributions of $100 or less than any other candidate in the Democratic field” –  more than 3,000 contributions, 90 percent from residents that hail from every corner of the state.

“It isn’t big money, it’s hard-earned money,” Harris said. “It’s grassroots,” and has reaffirmed his belief that the best days of the state are ahead.

Citizens are very interested in this election, understanding the tremendous impact that the next governor can have on their families, jobs, and lives, Harris said. “There’s a palpable feeling that something is wrong, that we’ve been losing too much.” Even his own son, a recent UConn graduate, is having trouble finding a job in the state with most of his opportunities being in Boston or New York.

“We need to replace inertia with energy, disappointment with determination, for sale signs with ‘open for business,'” Harris said.

The way to do that is by providing “thoughtful, decisive leadership on items that matter most,” Harris said, like investing in education at all levels, providing quality and affordable healthcare, and supporting vibrant, urban centers, while at the same time maintaining progressive values. “Our sense of fairness, Tikkun Olam,” Harris said.

Bringing Connecticut “back from the brink” will not be easy, but can be done and needs to begin with putting an end to the negativity and the “rock-throwing.”

Harris said his approach includes bringing people together to solve problems, offering prospective, proactive, and creative solutions, and immediately focusing on education and jobs to eliminate the skills gap to spark a more robust economy. At the same time that will build vibrant neighborhoods and create jobs in all communities.

“When I was elected mayor our town’s bond rating was at risk, our pension was not fully funded, and we were facing a recession. Things looked bleak,” Harris said. Working with his colleagues on both sides of the aisle, Harris said, “We funded our pension, focused on economic development to grow our economy, and independently, on our own, got back on solid ground all while maintaining the quality of our schools and the services that people depend on.”

The transformation of a rundown section of town to what is now Blue Back Square, developed through a public-private partnership, has had such a ripple effect on the town’s success.

“But we didn’t stop there,” Harris said. The best shot at success starts with early education, he said. “During my tenure as mayor, with the Board of Education, West Hartford was the first school district in Connecticut to offer public early childhood education.”

He has had success on the state level as well, championing health care coverage, access to emergency contraception for sexual assault victims, and creating efficiencies in the Department of Consumer Protection.

As a husband, father, son, and brother, Harris said he recognizes the “strength and wisdom” that resides in the women in his life. “Empowering women and girls is critical to our state’s prosperity, to all of Connecticut’s families. It’s also the right thing to do.” he said. “Women’s voices should and must be heard.”

As a starting point, he is committed to effective policies for healthcare, paid family leave, and pay equity, he said.

Harris noted the crowded and varied field of candidates for this year’s election, but said he has proven he can deliver results. “I am the only candidate in this race who is a proven, progressive problem-solver,” Harris said. “I get things done, have the ability to hit the ground running on day one … too much is at stake to have someone learning on the job,” he said.

“I’m ready to lead Connecticut forward with a focus on education, jobs, and economic development, while staying true to our progressive values. The commonsense approach, the can-do approach that made Connecticut a strong and creative, competitive state,” Harris said.

Specifically, he called for an end to over-reliance on top-down economic development with instead a “bottom-up” approach focused on entrepreneurs and smaller businesses, investment in infrastructure like fiber optics and rail, and access quality and affordable healthcare for all. If Washington won’t do it, “we’ll do it in here in Connecticut,” he said.

“This really is an incredible state and I’m not about to give up on it, neither are you,” Harris told the crowd.

“Connecticut can be the place where people want to work, people want to live, people want to build a future, raise a family, and want to see their grandchildren thrive. That’s why I’m running for governor, to help repair our state. Tikkun Olam,” Harris said. 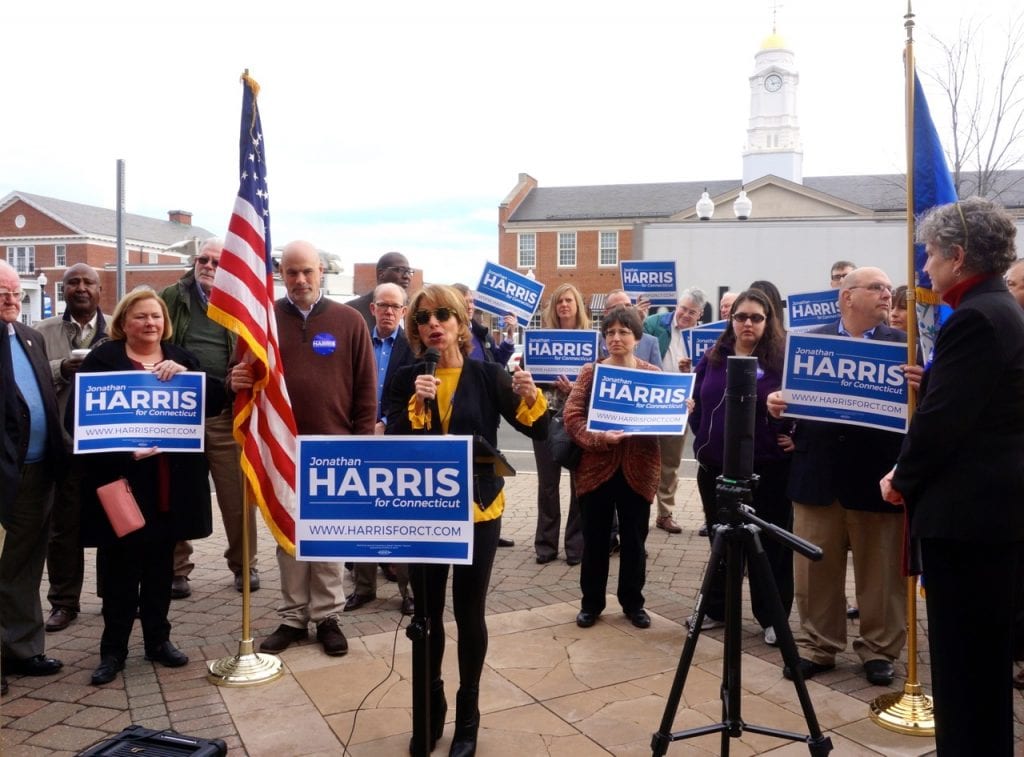 West Hartford Mayor Shari Cantor voices her support for Jonathan Harris, who announced Feb. 24 in West Hartford that he will run for governor in 2018. Photo credit: Ronni Newton

Before Harris took the podium, Cantor spoke in support of the former mayor, “a person who has been dedicated to service his whole life” and was instrumental in putting West Hartford on the map by recognizing the important opportunity that the Blue Back Square development presented.

“This was such a huge challenge for the sitting mayor to navigate West Hartford through,” Cantor said, with extremely strong feelings on both sides of the debate. “But he did it in a way that was civil and respectful, even-keeled and forward thinking, and reasonable.”

Harris “has the vision, he has the temperament, he has the progressive values, and he has the leadership to bring Connecticut forward,” Cantor said. 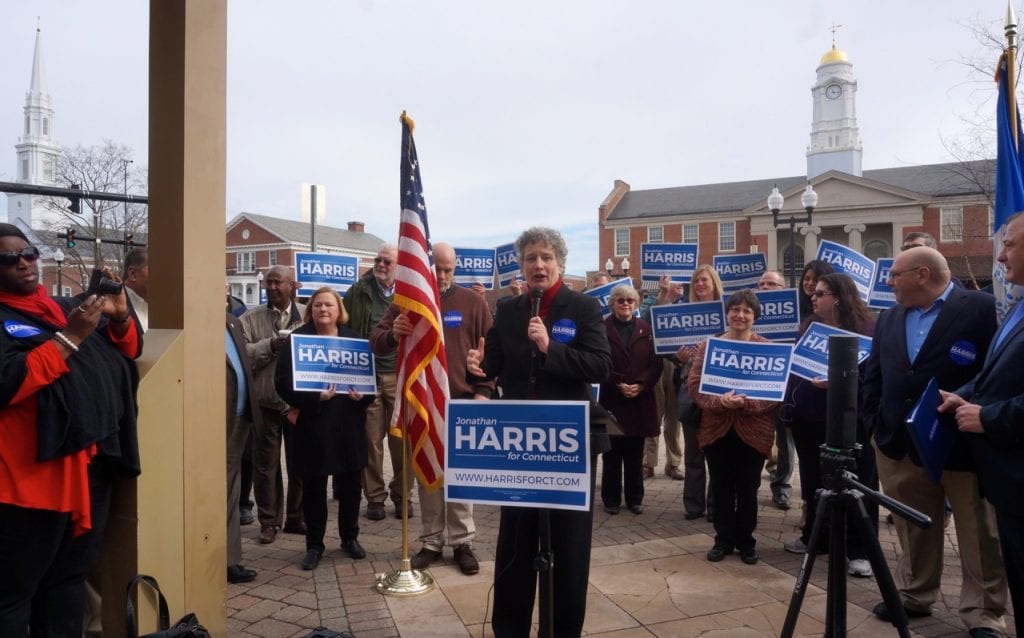 State Sen. Beth Bye voices her support for Jonathan Harris, who announced Feb. 24 in West Hartford that he will run for governor in 2018. Photo credit: Ronni Newton

Bye also voiced her support for Harris, noting the symbolic location of the announcement across from the former West Hartford Board of Education building, which was incorporated into Blue Back Square and is a testament to Harris’ ability to effect change. During his tenure, the Board of Education moved to Town Hall.

Harris is determined and kind, collaborative, knows how to move things forward, has vision, and listens, Bye said. The two words that come to mind when describing him are “respectful” and “successful,” Bye said.

Leading the Town Council’s work on Blue Back Square, Bye said Harris was able to “build consensus and move a community from skepticism to enthusiasm … He led a community listening process and turned a polarized debate into a very productive community conversation” while working on a bipartisan basis.

Jonathan’s foundational vision for this community is part of this success story …  it’s not easy to be a leader who effects change, its much easier to be a caretaker,” Bye said. 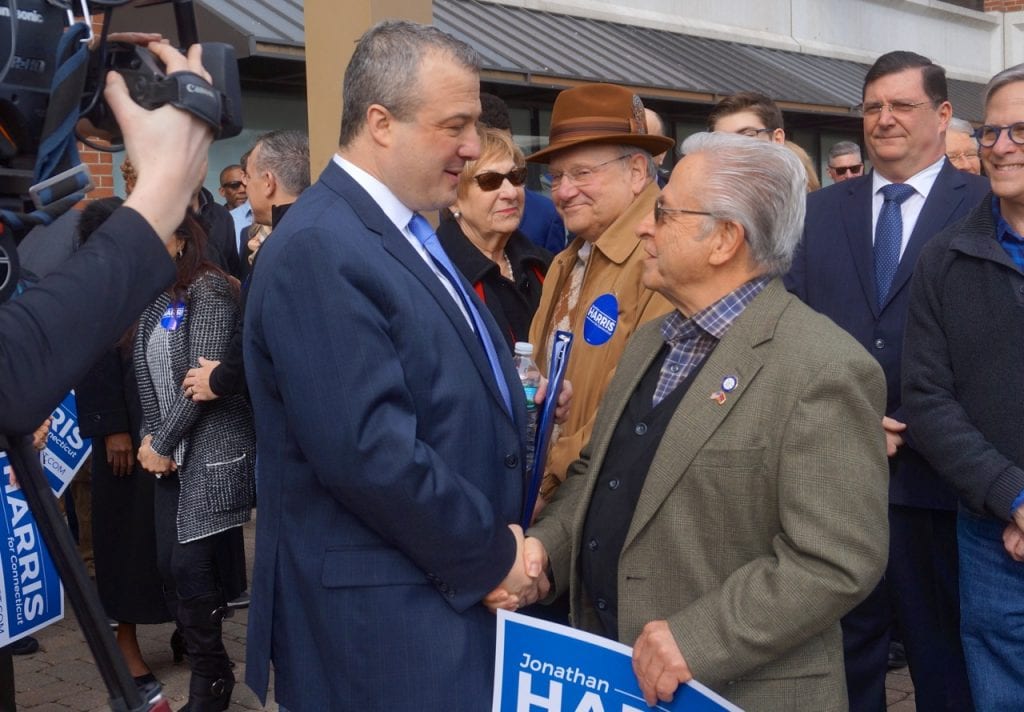 Jonathan Harris greets supporters in West Hartford on Saturday morning, where he announced his official plans to run for governor of Connecticut in 2018. Photo credit: Ronni Newton