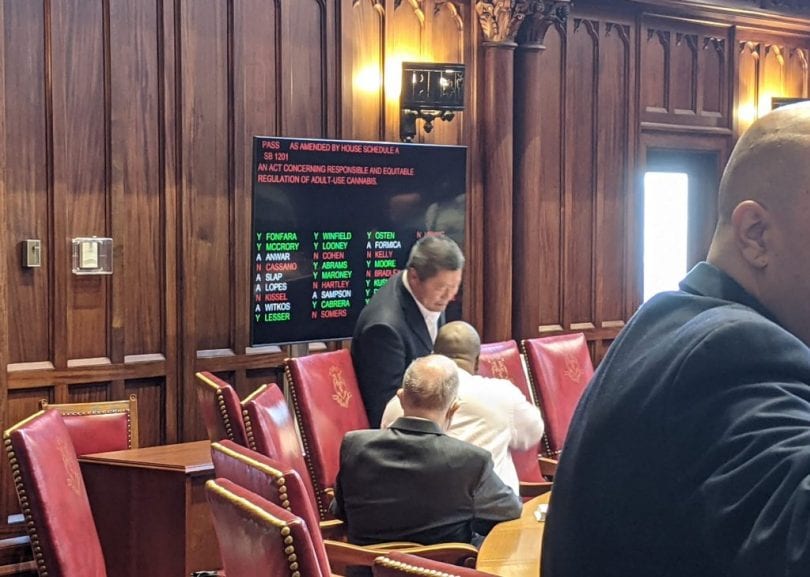 State Sen. Derek Slap of West Hartford voted in favor of legalizing marijuana the previous two times, but was absent due to a prior commitment when the Senate was called back into session at the last minute Thursday morning for a third vote on the measure.

With “serendipitous” timing, the Senate gave final passage Thursday to a bill legalizing recreational cannabis on the 50th anniversary of former President Richard Nixon’s 1971 speech credited with kicking off the ill-fated war on drugs.

The Senate voted 16 to 11 to send the bill to Gov. Ned Lamont, who released a statement promising to sign the legislation.

A convoluted legislative path led lawmakers to debate the bill for a third time in less than two weeks: expired session deadlines and last minute changes that prompted a veto threat from the governor. However, Sen. Gary Winfield, a New Haven Democrat and the bill’s main proponent in the Senate, told reporters that “sometimes things happen for a reason.” 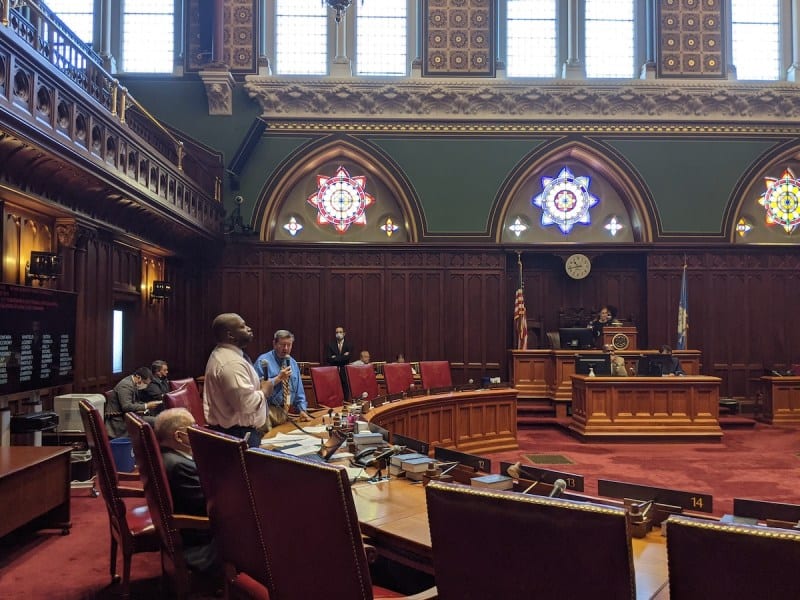 “That’s not the way laws are supposed to be made,” Winfield said. “So what we did is we put in place unjust laws. The reason why I think this is important is because we have operated for 50 years with unjust laws that target certain communities… We have damaged the lives of human beings in the United States of America who are of a certain hue because of politics.”

The nearly 300-page bill was negotiated all session and approved by the House Wednesday night. It legalizes possession of between 1.5 and 5 ounces of cannabis, depending on the circumstances, as of July 1. It also expunges the criminal records of people convicted of most cannabis-related crimes and sets up a regulatory framework to allow for the commercial sale of the substance as soon as next year.

In a press release, Lamont remarked on the anniversary of Nixon’s comments and steps taken by all of Connecticut’s surrounding states to establish their own commercial cannabis markets.

“This measure is comprehensive, protects our children and the most vulnerable in our communities, and will be viewed as a national model for regulating the adult-use cannabis marketplace,” Lamont said. “I look forward to signing the bill and moving beyond this terrible period of incarceration and injustice.”

During Thursday’s floor debate, opponents reiterated many of the objections they stated in the prior deliberations on the bill. Sen. Tony Hwang, R-Fairfield, said the House debate Wednesday night strengthened his resolve against the bill. Connecticut should be more concerned with public health than profiting off of cannabis sales, he said.

“Why are we rushing to implement something? Because the moment’s right? Strike while the iron is hot?” Hwang said. “Maybe when there is further deliberation, and when people really understand what we are voting on and passing as a sweeping public policy that in essence allows the state of Connecticut to get into the drug business maybe if we delayed, and had other viewpoints and thoughts we would draft something more protective of the goals of public health.”

Winfield said he had been pushing for cannabis legalization for over seven years.

“Why the rush?… I don’t know about you, but seven years is not a rush,” Winfield said.

Lawmakers and the governor’s office spent considerable time this year negotiating the terms of social equity provisions, designed to ensure communities damaged by the war on drugs get a fair stake in the new businesses created by cannabis legalization.

Under the bill, half of all business licenses will go to equity applicants, defined as someone from areas with high rates of drug-related convictions or high unemployment rates who has an income that is under 300% of the state median. A late addition to that definition – broadening it to anyone previously arrested on cannabis charges and some of their relatives – threatened to derail the proposal’s success. However, the House removed the provision, which necessitated the Senate’s Thursday vote.

Given that focus on equity, Winfield said he felt the timing of the bill’s passage was “highly appropriate.”

“At least for us here in Connecticut, much of the conversation has been about those communities that we’re talking about — disproportionately impacted,” Winfield said. “It wasn’t planned but sometimes things happen for a reason.”