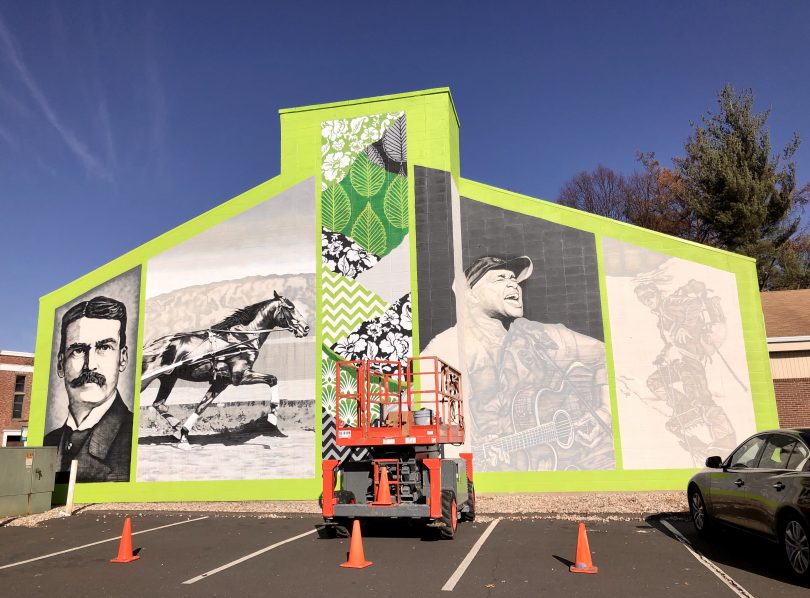 Benjamin Keller is making great progress on the mural on the side of 1100 New Britain Ave. in the Elmwood neighborhood of West Hartford. Photo taken Nov. 26. Photo credit: Ronni Newton

A mural being painted on the side of 1100 New Britain Ave. not only brightens up the streetscape, but also pays tribute to important local figures. 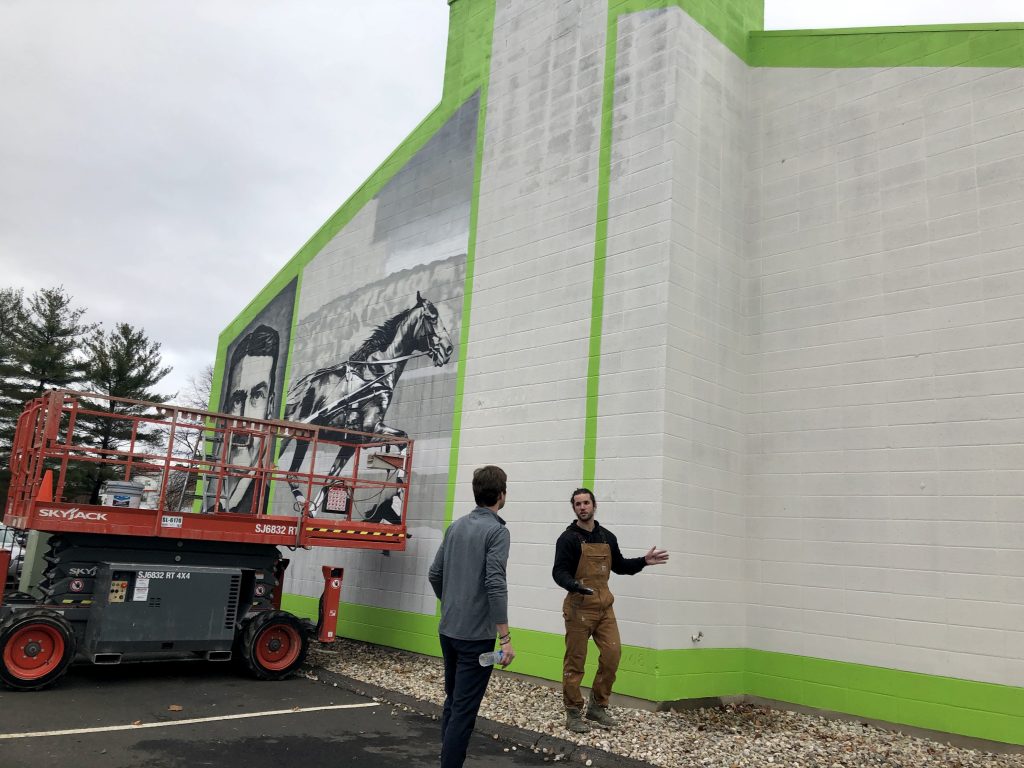 What was once a nondescript off-white concrete wall facing New Britain Avenue is about to become a landmark for the Elmwood neighborhood of West Hartford. 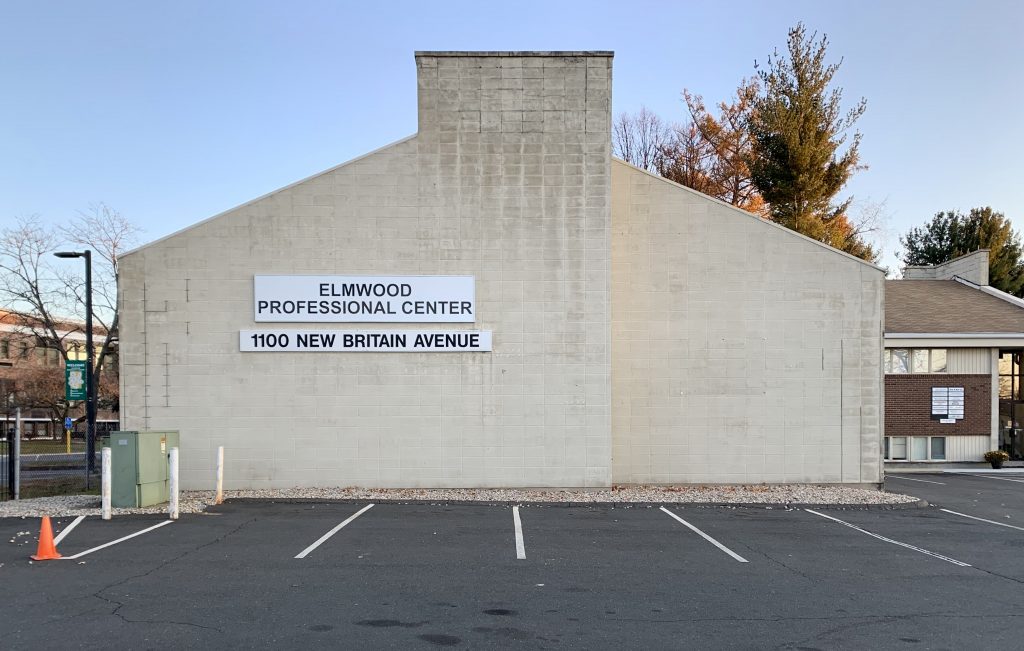 “Before” view of 1100 New Britain Ave. Courtesy of Benjamin Keller

Juniper Homecare, which has been providing a variety of elderly care services for more than 20 years, was outgrowing its headquarters at 1086 New Britain Ave., and purchased a building at 1000 New Britain Ave. in April to expand their office space.

Anton Brel, vice president of operations said that he and his father, Andrei, the company’s president, immediately began brainstorming about things that could be done with the wall.

“It was a really ugly wall,” Brel said, mostly a large blank space facing the roadway, adorned with only the street address and “Elmwood Professional Building.” That blandness is in the process of being turned into something really special.

Juniper Homecare decided to commission muralist Benjamin Keller “to brighten up Elmwood,” Brel said, and chose to focus on the area’s history, as well as important figures from the present day whose impact will be felt into the future. Town Historian Tracey Wilson provided input, as did consultant and longtime West Hartford resident Chuck Coursey. 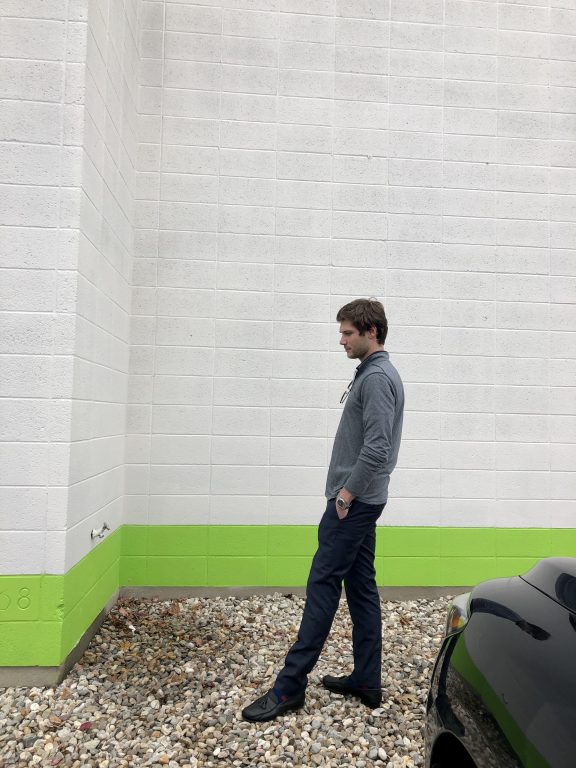 Anton Brel, VP of Operations for Juniper Homecare, looks at the blank wall that is being transformed into a mural. Photo credit: Ronni Newton

Two panels on the left side of the mural pay homage to the neighborhood’s past, beginning with a portrait of Charles E. Beach, former owner of Vine Hill Farm, known as one of the region’s finest dairy farms in the mid- to late-1800s, and producer of “clinical milk” that was shipped throughout the country. In 1900, Charles E. Beach built the mansion that still stands today at 18 Brightwood Lane.

Much of the land in Elmwood, including Beachland Park, was once part of Vine Hill Farm.

Just to the right of Beach is a racehorse – a tribute to the Charter Oak Park, which included a racetrack and, later, the Luna Park amusement park. Charter Oak Park once stood on a portion of a 145-acre tract at the southwest corner of where New Park and Flatbush avenues intersect today – near Home Depot and Triumph Engine Control Systems. According to Connecticut Explored, racing began in 1874, the amusement park was built in 1906, and the final races were held in 1931.

The two panels to the right are images of two people who represent the town, its diversity, and Elmwood’s, present and future.

Javier Colon, singer/songwriter and winner of the first season of NBC’s “The Voice,” has lived in West Hartford for about two decades, since his days as a student at the Hartt School. His kids have attended Charter Oak International Academy – right across the street from the former Charter Oak Park. He is depicted on the mural wearing his signature musical note baseball cap, tilted slightly to one side.

To the right of Colon is an image of Lhakpa Sherpa – a West Hartford resident who has summited the 29,030-foot Mount Everest nine times, and has broken her own world record for female climbers multiple times. Sherpa, one of 12 children, was raised in Nepal, and originally set out to prove that the outdoors was not just for men.

Sherpa has said that in 2020 she plans to climb not only Mount Everest, but also K2. 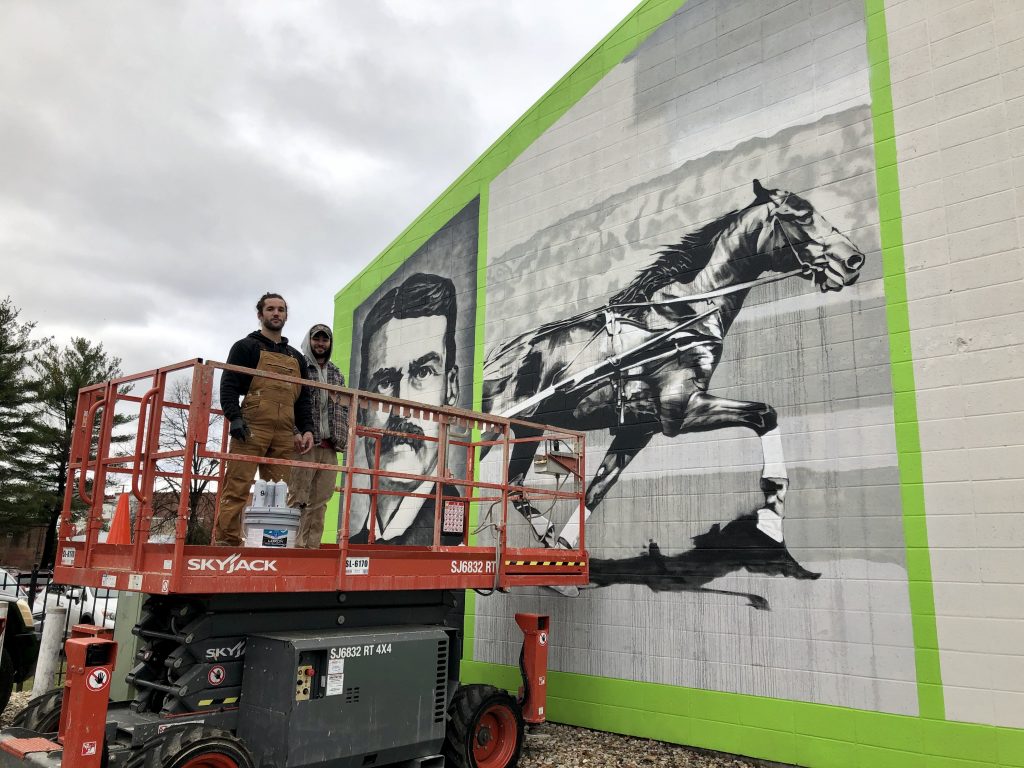 “The mural captures a great balance between West Hartford’s riveting history as well as how West Hartford is thriving today,” Brel said. “Javier Colon and Lhapka Sherpa really embody the success of West Hartford In the current day.”

Separating the historical and current day portraits is a graphic collage, including images of leaves representing the neighborhood’s iconic elm trees.

“It’s a graphic image to combat the hyper-realism of the black and white photos, juxtaposing them with visual language,” said Keller, who is being assisted in painting the mural by his brother, John.

Keller said he is using a combination of spray paint and exterior latex paint, and estimates that it should last at least 20 years. He started Nov. 15, and said he expects to be done by the middle of December at the latest. “It can get too cold,” he said, if the project extends into the winter months.

The seams between the cinderblocks are helpful in plotting out the mural, Keller said, and serve as a grid pattern. He said he draws the outline of each portrait, and then “fills in and layers it, and layers it.”

He had a large stencil – 75 inches by 25 feet – printed at Kinkos that he’s using for the center graphic. 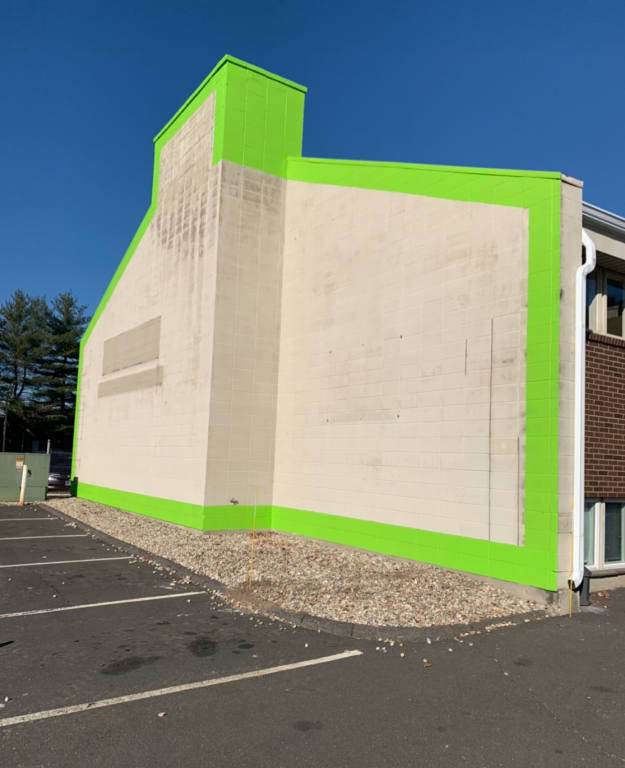 The bright green frame was the first element of the mural at 1100 New Britain Ave. Photo courtesy of Anton Brel

Keller previously did a project in the Elmwood area – 10 murals at the recently-completed West Hartford Housing Authority/Trout Brook Realty development at 616 New Park Ave. that he was commissioned by architect Amenta Emma to create. CTFastrak, which runs behind the building, was the inspiration for that project.

There is also a side of the wall at 1100 New Britain Ave. which traffic headed west can see, and the mural wraps around to include that area. Brel said that’s where Keller will paint a representation of the many accolades West Hartford has received, including:

There will be space left available, in case West Hartford receives future accolades that should be noted on the mural.

“We hope that this mural can become a symbolic landmark, not only for direction and reference points, but as the embodiment of a thriving and cultured West Hartford,” Brel said. 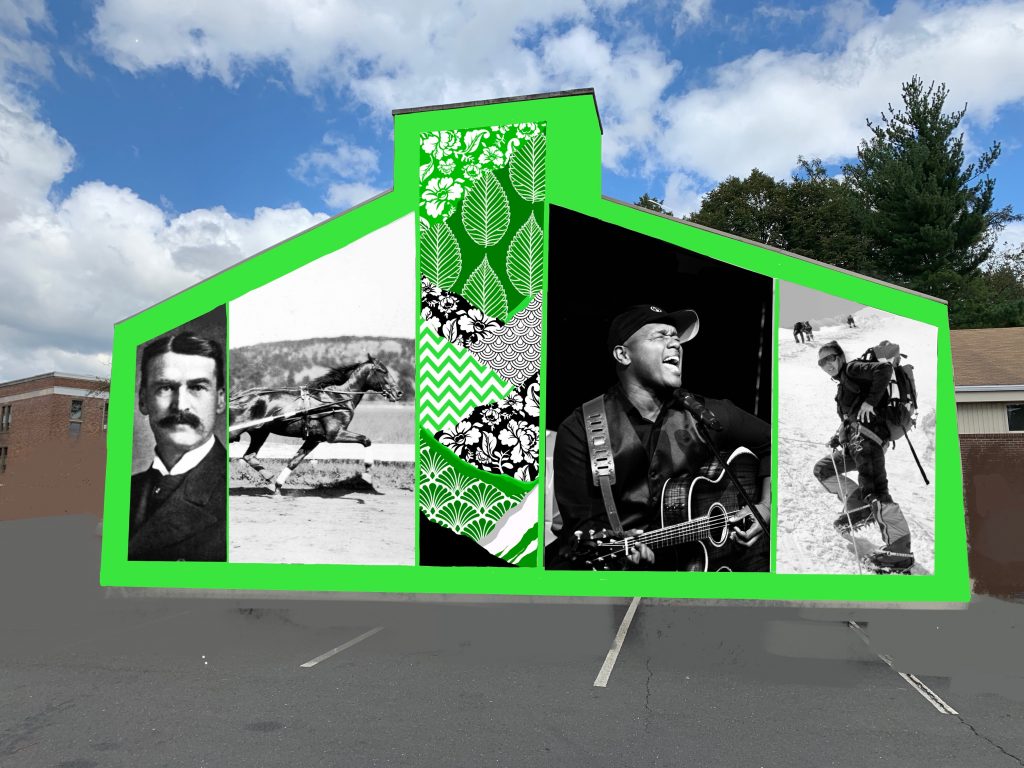