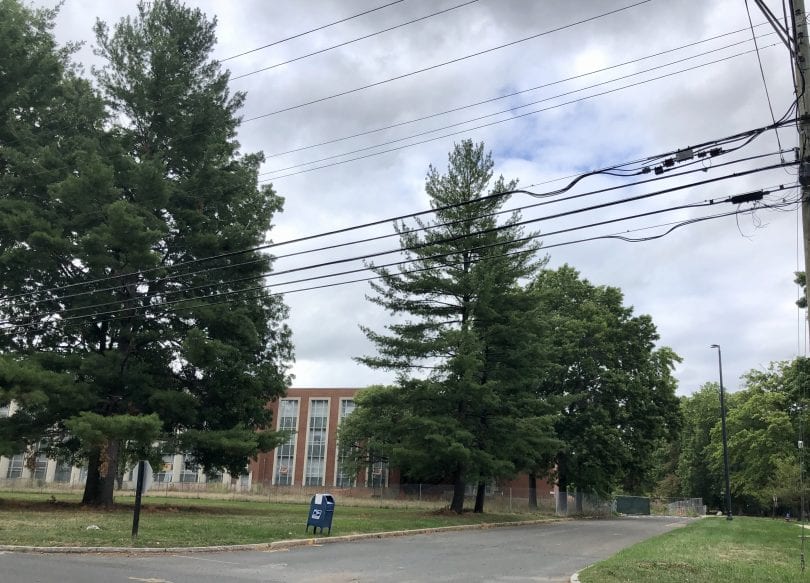 The Town of West Hartford has the first right of refusal if there are any offers to purchase the former UConn campus, now owned by Ideanomics/Fintech Village, and bids are due on Oct. 30.

A real estate broker is continuing to market the 58-acre former UConn West Hartford campus at the intersection of Asylum Avenue and Trout Brook Drive, while the town is continuing due diligence to determine the extent of environmental remediation required as well as the value of the property.

The six-month due diligence period, which includes a first right of refusal if there are any offers, ends on Dec. 31, 2020.

West Hartford Town Manager Matt Hart told We-Ha.com that he has been in frequent contact with Colliers International, which publicly listed the 1700 and 1800 Asylum Avenue properties just before Labor Day, and he has been kept up-to-date on the progress of the marketing efforts. He said he has also maintained communication directly with Ideanomics CEO Alf Poor.

“I’m very optimistic that we will be able to maintain the use of the ball fields, either as town-owned or from the new owner [of the property],” Hart said this week.

Colliers was engaged by Ideanomics, which purchased the property two years ago for the purpose of creating the global technology center Fintech Village, once the company decided that the project would not move forward.

John Cafasso, principal with Colliers International’s Hartford office, told We-Ha.com that there is a call for bids to be received by Friday, Oct. 30.

“We have a number of offers on the table,” Cafasso said Wednesday. “We’re happy with the progress to date.”

The property has been marketed as either a complete package, or as separate parcels, and all options will be considered.

“We have offers for both, and for everything,” Cafasso said.

Cafasso said Colliers will be reviewing all bids received and making its recommendations to Ideanomics. They will be looking at the developers’ plans, vision, and timeframe, he said, and may need to schedule a round of buyer interviews.

Cafasso did not provide any details about any of the bids, but noted the possibility of multifamily housing as well as medical offices being included in the mix, and said some type of density will be needed in order to make the economics of developing the property workable, and it will likely be done in phases.

Cafasso said he looks forward to bringing all parties to the table to review the bids, and hopes there will be a proposal that will work for the community and the town – one that will create something special on the property.

Robinson & Cole is currently assisting the town in determining the value of the property and the status of the remediation efforts, Hart said. He has not yet received their final report, but will be receiving both the environmental assessment and appraisals for each property, and will be presenting that information to the Council if it appears the town would consider exercising its right of first refusal.

In late June, the Town Council approved a resolution, which took effect July 1, allowing Hart to enter into a contract with Fintech Village, Inc./Ideanomics to give the town first right of refusal should there be an offer on the property. The agreement also allowed the town continued use of the ballfields and playgrounds on the east side of Trout Brook Drive, and the town agreed to assume Fintech Village’s responsibility for maintenance of the grounds, which had become overgrown.

Under the terms of the right of first refusal, Hart told the Council in June, “The town would have the ability to match any offer that Fintech Village might receive to purchase both parcels, as well as an offer they may receive to purchase one of those parcels individually.”

One of the five buildings on the former campus was demolished by Ideanomics’ contractor last year, and some degree of remediation of polychlorinated biphenyls (PCBs) and asbestos has taken place in other buildings.

Ideanomics purchased the 58-acre former UConn campus “as is” for $5.2 million in October 2018, with the intention of to building Fintech Village – a $400 million center for global technology and innovation – on the property, and creating jobs for upwards of 300 people. They committed to assume all responsibility for remediation of the contamination which occurred when the state owned the property and constructed the buildings for UConn.

The project ultimately stalled for a host of reasons, and in the most recent financial report Ideanomics noted that the company is shifting its focus from financial services to the Electric Vehicle sector. The company has been publicly touting success in the Chinese EV market.

In March, Ideanomics CEO and Fintech Village President Alf Poor told We-Ha.com that the company was seeking potential partners for the Fintech Village project. Hart said that it was a mutual decision this spring between the town and Ideanomics to begin crafting the agreement which took effect July 1.

Hart said there are valid reasons for the town to take another look at purchasing the property, including the fact that it contains recreational assets – four ball fields, including the Miracle League field – that the town has had use of for many years. The property is also strategically located in town.

“We hope to bring in a qualified developer that wants to be part of the community,” Cafasso said last month. “This is one of the last large tracts of land in Central Connecticut.”

The flier created by Colliers for the property (see below) notes that it is “zoned for single family development with multifamily or office potential.”

Any changes to the existing single-family zoning would require approval of the Town Council. Other challenges to development include the fact that much of it is wetlands, and remediation of contaminants needs to be completed.