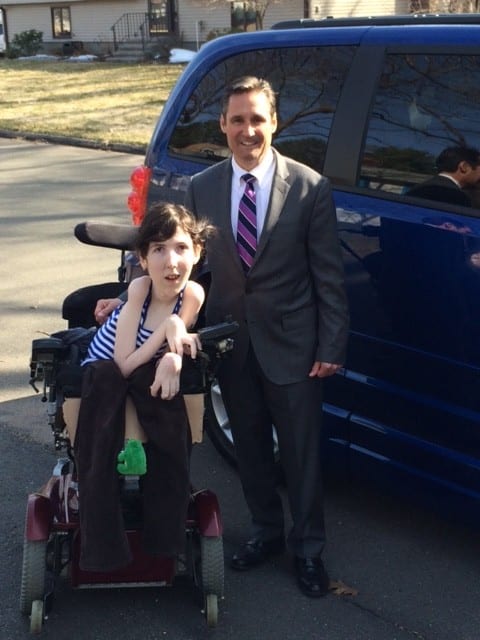 Rob Bouvier, president of Bouvier Insurance and a former West Hartford mayor, donated the majority of the funds needed to purchase a wheelchair accessible van for an Enfield man. 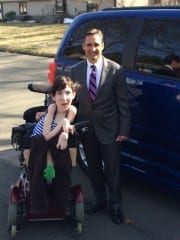 Rob Bouvier and his Connecticut insurance agency, Bouvier Insurance, have been active supporters of community-based charities for decades, but until he heard about Adam Avery’s inability to leave his home, never before had one need resonated so strongly.

In late March, Bouvier saw a news story on WFSB Channel 3 by reporter Jill Konopka that focused on Adam Avery, a 24-year-old Enfield man with spinal muscular atrophy who was unable to leave his home because his family’s 30-year-old wheelchair van had finally broken down for good and they could not afford a replacement.

“He hadn’t left his house in more than a year. I couldn’t image,” Bouvier said. He learned that the Avery family had started a GoFundMe site, but knew it might take six months to a year to raise nearly $40,000 that was needed for a replacement van. 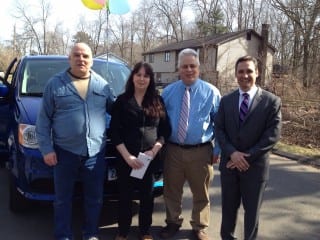 Bouvier spoke to his business partners, showed them the news story, and all agreed. Neither Bouvier nor any of his co-workers knew the Averys personally, they weren’t clients, but they felt the need to help and the decision was unanimous, Bouvier said: “We’ve got to get him a vehicle.”

Bouvier’s donation was $31,500. The asking price for the van the family picked out, a like-new bright blue 2013 Dodge Entervan XT with only 10,000 miles, was $43,000, but Bouvier said that Ride-Away in East Hartford was willing to negotiate. Amy’s Angels donated $2,000, and monies raised through GoFundMe paid the balance.

“We’ve never done anything this big before. We’ve always been supportive of community-based charities – all five Connecticut offices have – but not doing something like this for one person,” Bouvier said. 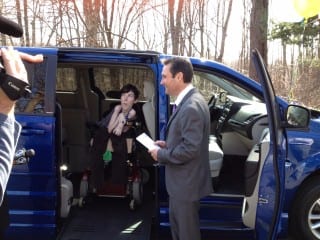 Rob Bouvier speaks hands Adam Avery season tickets to the Bushnell, one of the places he really wanted to go once he could leave the house. Courtesy photo

Bouvier got to meet Adam and his family when the van was delivered, just a week after the initial story aired. “I told Jill [Konopka], if not for her journalism work, I never would have known about this.”

Adam and his family were extremely appreciative, and immediately took the van out for a spin around the neighborhood. His GoFundMe site details some of the other trips the family was finally able to take, including to a local bakery. Adam had also expressed a desire to see a show at the Bushnell, and the family now has season tickets that Bouvier also presented.

“I hope this inspires some others to help where they can. It doesn’t matter how big or small. Helping to make a difference in someone’s life is so important,” Bouvier said. 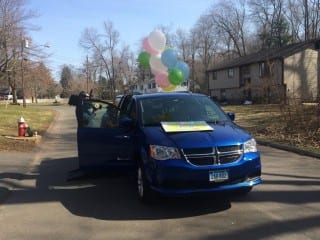 The Averys wheelchair accessible van was purchased thanks in large part to a donation from West Hartford’s Rob Bouvier. Courtesy photo

“These opportunities are around us every day. I hope this goes on to inspire others.”

To view the WFSB story and see the Averys receive their new van, click here: http://www.wfsb.com/story/28733390/enfield-family-receives-wheelchair-van-donation#ixzz3XKo9uOAL