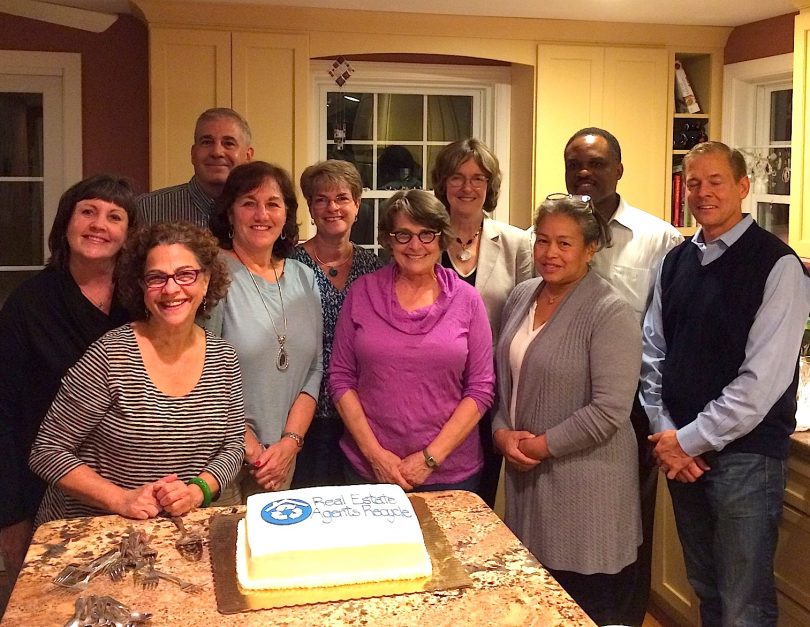 The Real Estate Agents Recycle Board of Directors. Courtesy photo

Real Estate Agents Recycle, a West Hartford-based non-profit, helps home sellers dispose of their unwanted stuff by distributing it to people in need or recycling it properly, and at the same time creating jobs for the unemployed and underemployed.

Dealing with unwanted “stuff” can be one of the most daunting aspects of moving out of a home, with many people deciding to purge by throwing everything into a giant dumpster where it becomes part of the waste stream.

For many, it appears to be the “easy” way out.

What ends up in the dumpster often includes furniture or other items that have plenty of useful life left if they could get to the right person, or materials that can be recycled rather than discarded as trash.

“Janet [Tanner] has been in the real estate business for a long time,” said Mary Millican. “She got tired of watching dumpster after dumpster get carted away.”

Janet Tanner and Mary Millican, both realtors with RE/MAX Premier in West Hartford, together founded Real Estate Agents Recycle – but the company, which has been piloting the program for two years and in April 2017 became a 501(c)(3) non-profit, does much more than just help people get rid of their unwanted things.

“It’s such a cool program. It’s humanitarian, environmental. We hire people who are underemployed to do the coordination or distribution,” Millican said. “No dumpsters.”

At the 11th hour, when Millican said many sellers would ordinarily resort to throwing everything into a dumpster, maybe even just to get their home ready to list, Real Estate Agents Recycle instead sends in a crew. Movers take furniture, accessories, old clothes, sports equipment that the seller wanted to get rid of, and brings everything to the appropriate place where it can either be reused or recycled.

Real Estate Agents Recycle tries to make it simple for home sellers. They send a coordinator into the home – someone who would otherwise be unemployed or underemployed – to review what the seller no longer wants or needs.

“We take everything – everything but toxic waste and weapons. Everything,” Tanner stressed.

“It’s a valuable service to the seller. It saves them time – and stress,” Tanner said.

Coordinators are trained and insured, and work as contractors for Real Estate Agents Recycle, billing the organization for their time, with hourly rates beginning at a minimum of $20 per hour. Most have other jobs, but the part-time work at a decent wage can make a major difference.

The service doesn’t cost the seller anything, but half of 1 percent of the purchase price comes out of their agent’s fee (for example, $1,500 if the home sells for $300,000). The seller can get a rebate of up to $1,000 for costs associated with moving the discarded items, and if the items can be used by a local charity and the receipts are submitted, they can also get a tax deduction.

“Everything that we take to agencies, they’re all non-profits,” Millican said. The agencies are all involved with helping people transition from homelessness or secure safe and reliable housing, and include A Hand Up, Inc.; Salvation Army; Big Brothers Big Sisters; Journey Home; and the Habitat for Humanity ReStore.

The coordinators are training to know what the different agencies need. They know that A Hand Up prefers to receive dishes and linens in sets, for example, and they know what the ReStore can sell.

Real Estate Agents Recycle doesn’t clean or repair items, so part of the coordinator’s role is also determining if items are in good enough condition to be reused. “People still have pride. We strive to only give things that are in good condition,” Millican said. “We encourage people to be generous in what they donate.”

Occasionally items earmarked for giving away that are true antiques have been found. It’s rare, Tanner said, but in that case there’s an arrangement with an antique dealer who will then make a donation to Real Estate Agents Recycle.

Items that can be recycled – paper, metals, electronics – are kept out of the landfills. Tanner said that West Hartford Public Works Director John Phillips has given the organization permission to use the Brixton Street recycling facility without requiring the owner of the property to be present.

The structure of the arrangement ensures that the Real Estate Agents Recycle non-profit earns at least $500 from each transaction to fund its expenses.

“It’s an opportunity for the brokers to invest in the community and help the environment,” Tanner said, while at the same time building their own client base. The individual realtors need to have approval of their brokerage company to participate, and while right now only RE/MAX agents and Rob Levine at Hart Real Estate are registered, Tanner is hopeful that it will expand.

“Under one umbrella we’re helping people transition from homelessness, helping the environment, and helping the underemployed,” Tanner said.

Right now Real Estate Agents Recycle is still in start-up mode, but eventually the goal is to also provide financial support to the organizations with which it works, Tanner said. Phase II will also include a repurpose function on the website, a database so that the agencies can have direct access to see what’s available so that they can pick it up directly and deliver it to the end user.

“There are a lot of things we want to be able to do, but we need more transactions,” Tanner said.

Tanner said that Real Estate Agents Recycle recently received some valuable assistance from Eric Chen, associate professor of Business Administration at the University of Saint Joseph, who had his class take on the organization’s mission as a capstone project. The students made suggestions for updating the website, and incorporated a value chain into the business model, Tanner said. They are also getting some help from a summer intern.

The organization has also been recognized by the National Association of Realtors, and has received a “Volunteer Works” grant.

Millican said that Real Estate Agents Recycle will hold its first major fundraiser in March 2018, featuring a birdhouse auction. Local carpenters have already committed to crafting the birdhouses, which will then be painted and otherwise augmented by artists, schoolchildren, and others in the community.

“It will be a fun evening to introduce Real Estate Agents Recycle. We’re really part of the solution to the environmental pieces, but also invested in better paying jobs to help people have a better life,” Millican said.

“Our mission is to uplift people who have been left out of the American dream,” Tanner said. “This is not a charity, it’s a philanthropic initiative.”

The inspirational story that led to Tanner’s initial thought to create an organization like Real Estate Agents Recycle has been provided in the PDF below.