West Hartford Public Schools spent more than a year studying a change in school start times but did not put it to a vote, but Tuesday approved a resolution urging the General Assembly to consider state-wide legislation mandating later start times for middle and high school students. 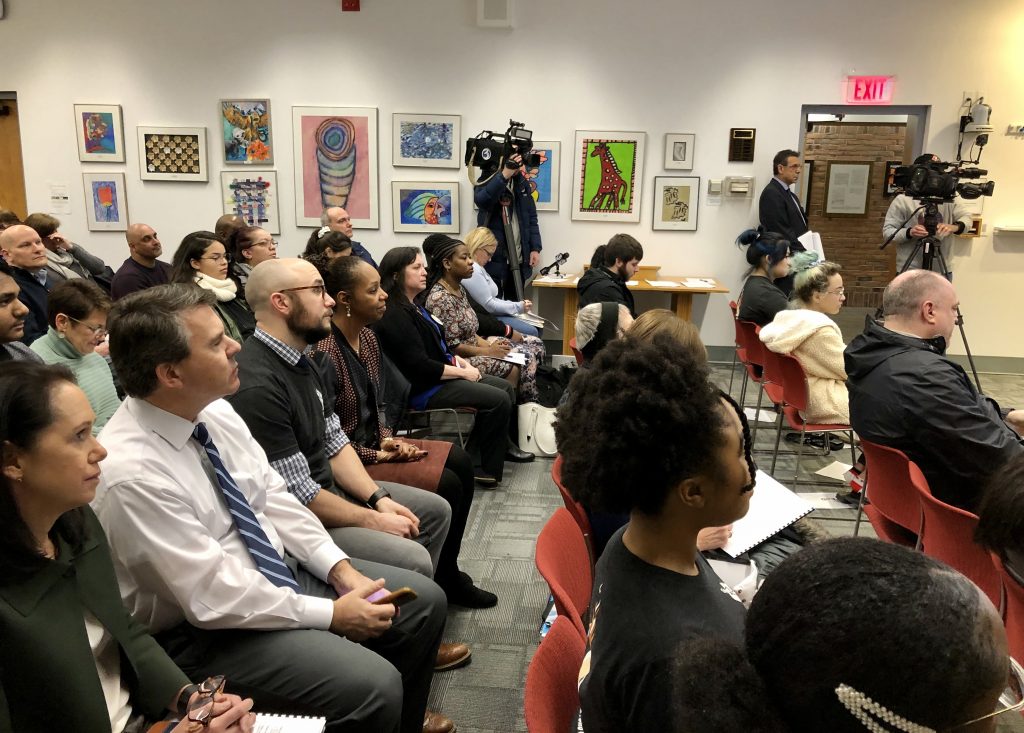 A large crowd at West Hartford Town Hall Wednesday night for the Board of Education vote on a resolution to recommend a statewide mandate for later school start times for middle and high school students. Photo credit: Ronni Newton

The West Hartford Board of Education approved a resolution Wednesday night by a vote of 5 to 1, with one abstention, urging the General Assembly to pass legislation requiring schools to begin academic classes no earlier than 8:30 a.m. for students in grades 6-12.

All five Democrats on the Board – Deb Polun, Lorna Thomas-Farquharson, Amanda Aronson, Sean Passan, and Ari Steinberg – voted in favor of the resolution. Republican Mark Zydanowicz voted against it, and Republican Rob Levine abstained.

Consideration of a change to later start times specifically for West Hartford Public Schools ended last May, when then-Board of Education Chair Carol Blanks announced that the proposal was off the table and start times would remain as is.

Several months prior, during an emotional and contentious meeting on Nov. 20, 2018 – with a standing-room-only crowd filling the room – the Board initially decided to table the discussion rather than vote that night as planned. Blanks at the time cited a variety of reasons, including the emotionally-charged nature of the discussion and a need to focus on other priorities including a mandated increase in graduation requirements.

Earlier this month the Board began discussion of a resolution supporting a state-wide approach, and a first reading was held Feb. 4 on a “Resolution Supporting a Statewide Change to School Start Times.”

On Wednesday, in front of a nearly-full audience, the Board held its second reading of the resolution and voted to forward it to the General Assembly.

The only impact of the resolution is that it makes a statement as official notification to West Hartford’s legislative delegation, and the General Assembly as a whole, that the West Hartford Board of Education supports a statewide move to require that students in grades 6-12 to begin academic classes no earlier than 8:30 a.m. so they can arrive at school “healthy, awake, alert, and ready to learn.”

Prior to the vote, seven residents addressed the Board during the public comment session.

Joanne Palmer, a former teacher, said she feared the excessive cost of starting both middle and high schools later, which she understood could mean double the number of school buses at a cost of millions of dollars, which would be “unnecessary and at this time fiscally unwise.”

Chris Torino said while he understands that kids need more sleep, “somehow everyone in this room survived getting up early for school.” For parents who have to be at work earlier in the morning like he does, later school start times would result in difficulties getting students to school. He said he lives nearly two miles from the school and doesn’t get a bus, so he drives his kids and would not be able to do that. “It would be impossible to do the 8:30 start time right now without transportation for our children,” Torino said.

Other residents, some whom have addressed the Board about start times in the past, noted the overwhelming scientific evidence that a later start to the day results in major physical and mental health benefits for teens.

Mary Fleischli said that when the district first formed the Rethinking School Start Times Committee, she was “so encouraged to see West Hartford yet again leading the charge for what’s best for our kids.” She said she was discouraged when the efforts “fizzled out,” and urged the Board to forward the resolution to the state and choose the well-being of kids over the inconveniences of adults.

Sarah Raskin thanked the Board for continuing to look at the issue, and for support of a statewide initiative, but added that she hopes that pushing this to the state “doesn’t mean you’re abandoning efforts in West Hartford … Every day that we delay we’re harming our children,” she said, and it could take years for anything to happen at the state level. She urged the Board to get stakeholders together to come up with a plan that may not be perfect, but will be the “best of all possible solutions.”

Abigail Adams, who is a college professor, agreed that the science behind later start times is “clear, it’s just really clear … I want that science to make a difference.”

Maria Larusso, also a professor, said the research on school start times is very compelling and while it may initially be convenient to change start times, it would be the “easiest, cheapest, and most reliable thing you can do” to improve the wellbeing of children.

Before voting, Board members also shared their opinions about sending a resolution to the state and about changing school start times in general.

“There’s an old saying, if it’s not broke don’t fix it,” Zydanowicz said. He noted that West Hartford’s many accolades, which are constantly touted by Town Council members, are in large part due to our wonderful schools.

“There’s a time to lead and a time to follow. This isn’t a time to lead,” Zydanowicz said. When the Board was considering “leading” by changing school start times last year, he said emails he received were 63-64% against it. Surveys of Conard and Hall students showed support for a later start time when students thought they would go to school later and get out at the same time, Zydanowicz said, but once they realized that they would have to stay later, in a subsequent survey later school times were “rejected by as much as 75%” of high school students.

Zydanowicz said he personally believes that increases in mental health issues and sleep problems are related to the blue light from cellphones and other electronic devices, and that’s something parents should control in their own homes.

“This resolution, I find perplexing,” Zydanowicz said. He said the Board has been through this, and works for children’s best interests, but sending a resolution to the state “is politics, 100% … I would like to leave politics out of this.”

Republican Rob Levine said he was also perplexed to see the issue of school start times raised again. “At the end of the day for a variety of reasons the Board chose not to move forward with it,” he said, and it was his understanding that the group decided to listen to the “hundreds of emails” that showed the community was divided with a large percentage opposed to the options presented. Unintended consequences would impact not only athletics but also other extracurricular activities and students who have part time jobs.

The chance of the state passing something is slim, Levine said. “To think that us putting a proclamation out as one of 169 towns … is just political.

“It’s not a good use of Board time to make a resolution that does not really affect anything,” Levine said, adding that he just can’t support it but knows that it will pass anyway with majority party support.

Democrats on the Board, and the student representatives from Conard and Hall, expressed their support for the resolution.

Polun, the Board chair, said the reason for bringing this up now is “because we have an opportunity, an opportunity to do what we want to do, what is right because of science,” and have a positive impact on health and happiness.

“We have the ability to say we support a statewide approach” at time when the legislature is in session and can consider it, and a statewide approach could use the wisdom and collective thinking of multiple districts to perhaps find the best solution.

Thomas-Farquharson said that while she appreciates the difference of opinion among Board members, “what I do know is what the resounding information has stated … The science is irrefutable,” and the current start times for West Hartford’s middle and high school students don’t support that science.

When the start times proposal was tabled last year, it was to permit a rational decision to be made without distraction, and in addition the options were “not ideal,” Thomas-Farquharson said.

Aronson said it was clear that making a change to school start times independent of other districts would not go smoothly, but urging a statewide consideration would prompt a discussion about health, and allow for examination of issues like before and after school care, lighted fields, and even employer flexibility, and open the door to coordinated change.

“We have to think strategically … but it’s time well spent,” Aronson said. “Our children are worth it.”

Passan was not a Board member when changing school start times was being considered, but he was on the Rethinking School Start Times Committee, and said he was happy to reopen the discussion.

While the option previously under consideration wasn’t ideal, a move for the health of children is important and “moves in the right direction.” He cited a survey by Hanover that was distributed to 16,000 stakeholders, and showed parents and students supported later start times. The results of that survey can be found here.

Passan said the Board would not want to push something the community doesn’t want, but their job is to put children first. He urged his colleagues to “join me in not only voting for this tonight but looking at it further.”

Hall student representative Isabella Galm said that during exams, which begin at 9:30 a.m., she notices a significant increase in her ability to focus.

“Concerns were conflicts with athletics and when it’s a stateside initiative those conflicts decrease significantly,” Galm said, noting that in support of the resolution, the Board has the opportunity to act and support our young people’s health and well being.

“Since when is West Hartford Public Schools a system that follows, we’re one to lead,” Conard student representative Kenia Ferreira said.