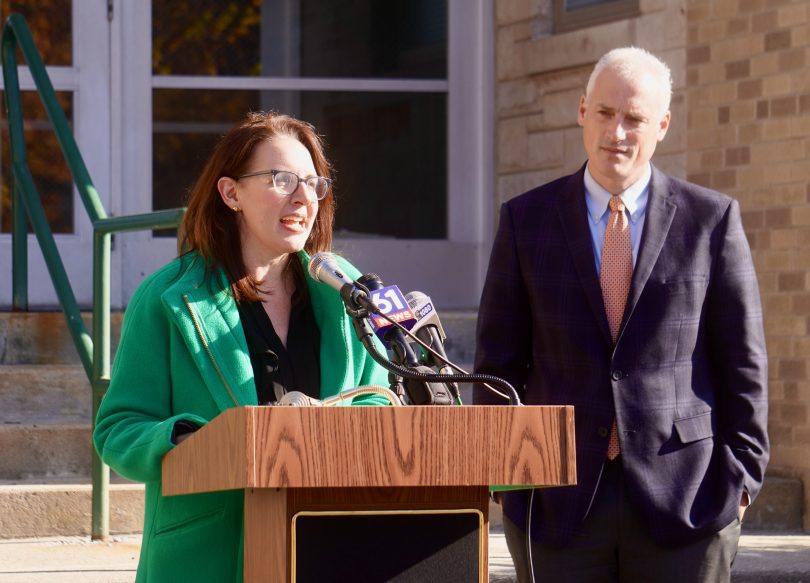 State Rep. Kate Farrar and state Sen. Derek Slap are among those who spoke Wednesday at the announcement of West Hartford's purchase of the former St. Brigid School at 100 Mayflower St. as the site of a new Elmwood community and cultural center. Photo credit: Ronni Newton 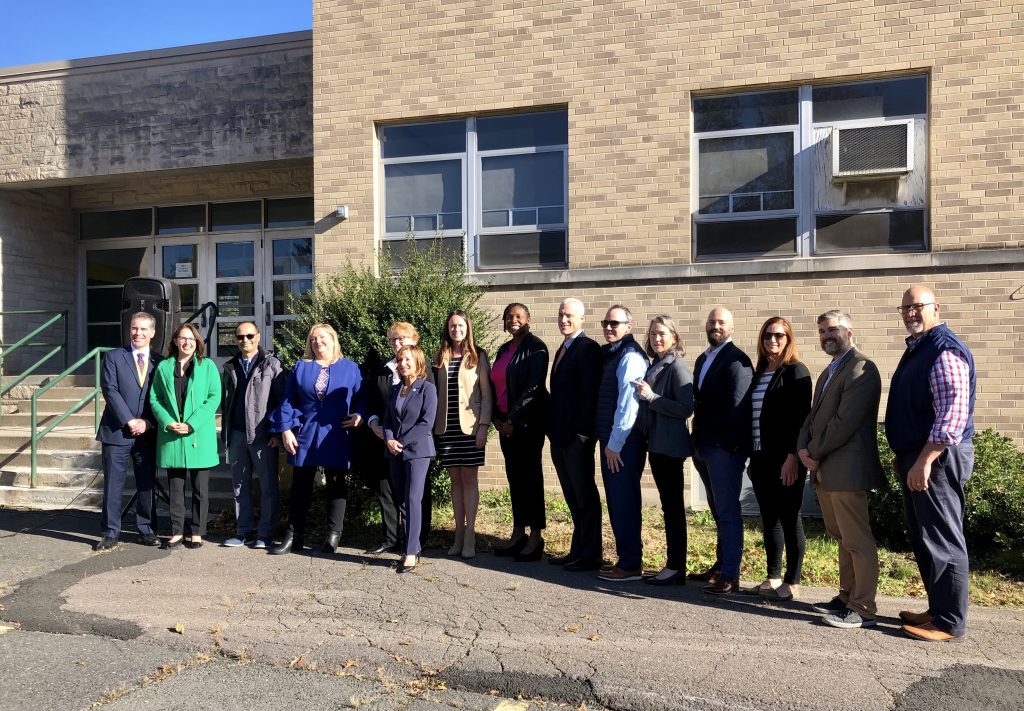 The Town of West Hartford on Wednesday formally announced the recent purchase of 100 Mayflower St., formerly home to St. Brigid School, at an event celebrated by Gov. Ned Lamont, members of the town’s legislative delegation, Mayor Shari Cantor, and representatives of various groups that plan to make use of what is being planned as a new state-of-the-art community center and cultural center, serving teens, seniors, cultural organizations, and the Elmwood branch of the public library in a flexible space that is also adjacent to the town’s largest park.

The town entered into a purchase agreement for the property in March, and after conducting due diligence the West Hartford Town Council voted July 13 in favor of purchasing the 8.5-acre parcel at 100 Mayflower Street for $3 million – citing the strategic location adjacent to Beachland Park and the ability to not just meet a current need but also fulfill a vision for the future. 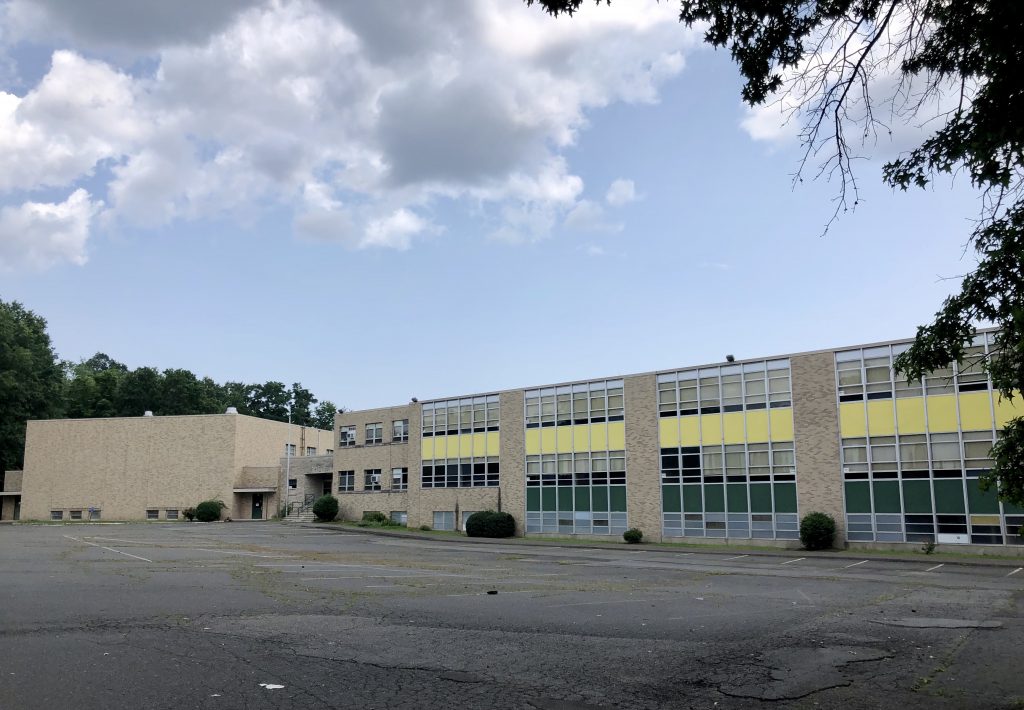 In July, the state Bond Commission agreed to provide the Town of West Hartford with $2.5 million for the project, leaving the town a contribution of $500,000 to purchase the property, plus an estimated $310,000 for functional program development by an architectural firm, a feasibility study, and pre-construction services. The studies are expected to be completed by the end of 2022, according to the bond funding request.

“Today is a true day of celebration, because we are acknowledging this once-in-a-generation opportunity to purchase this St. Brigid School property, which is really an opportunity for Elmwood and our entire town,” said Kate Farrar, who represents West Hartford’s 20th district, where the property is located.

“This purchase really speaks to a future where we can have even greater possibilities for our teens, for our seniors, and for our more diverse community,” Farrar said.

The Elmwood Community Center, formerly Elmwood Elementary School, was built in 1920 and no longer adequately meets the town’s programming needs. The town would also like to move the Faxon Branch Library from its aging structure to the new facility, and to be able to serve more of the community’s needs all in one space.

State Sen. Derek Slap, whose birthday was Wednesday, joked that he couldn’t think of a better gift than this project, which he said will make this special town even better than it already is.

Slap commended the entire West Hartford legislative delegation, the governor, the mayor, and other town leaders for working together to obtain the bonding, and for their support of the project that will improve the town’s ability to serve seniors, youth, and civic groups.

“It’s a win-win for taxpayers in West Hartford,” Slap said, thanks to the state’s support but also because “it’s going to help facilitate the development of the Elmwood Community Center,” paving the way for the strategic redevelopment of that existing property to grow the town’s grand list. 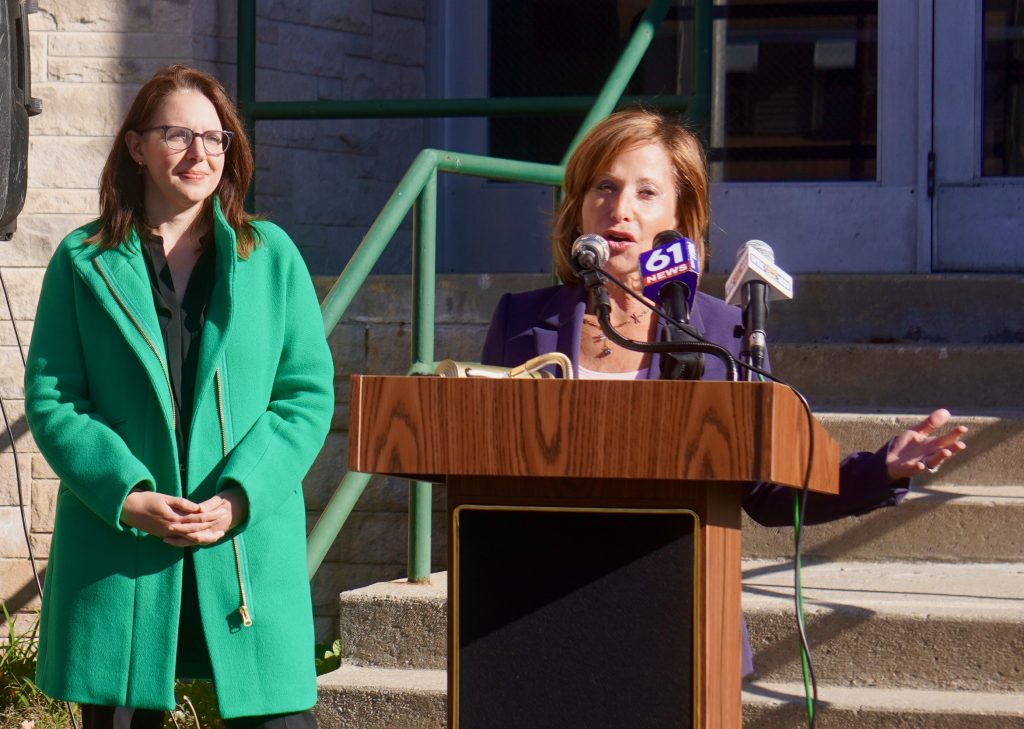 Mayor Shari Cantor speaks at the announcement of West Hartford’s purchase of the former St. Brigid School at 100 Mayflower St. as the site of a new Elmwood community and cultural center. Photo credit: Ronni Newton

Cantor expressed her thanks to those who supported the project.

“This is truly a partnership, Cantor said. “West Hartford is a very diverse community. We have 77 primary languages spoken in homes in our community … we often talk about the benefit of bringing community together,” she said, and this project will be an opportunity to envision what can be in a space where veterans, seniors, youth, families, and others can all be served, in the near future as well as for generations to come.

Cantor said she expects to have significant community input from throughout town, and is excited to hear what others envision for the space.

In addition, Cantor said the existing Elmwood Community Center, which is 100 years old, is not energy efficient. The new facility will be a model of sustainable, green design. “We are going to start ground one with hopefully having a net zero building so that not only within the walls, but the walls [themselves], will also be efficient and wonderful, and benefit our community,” she said. 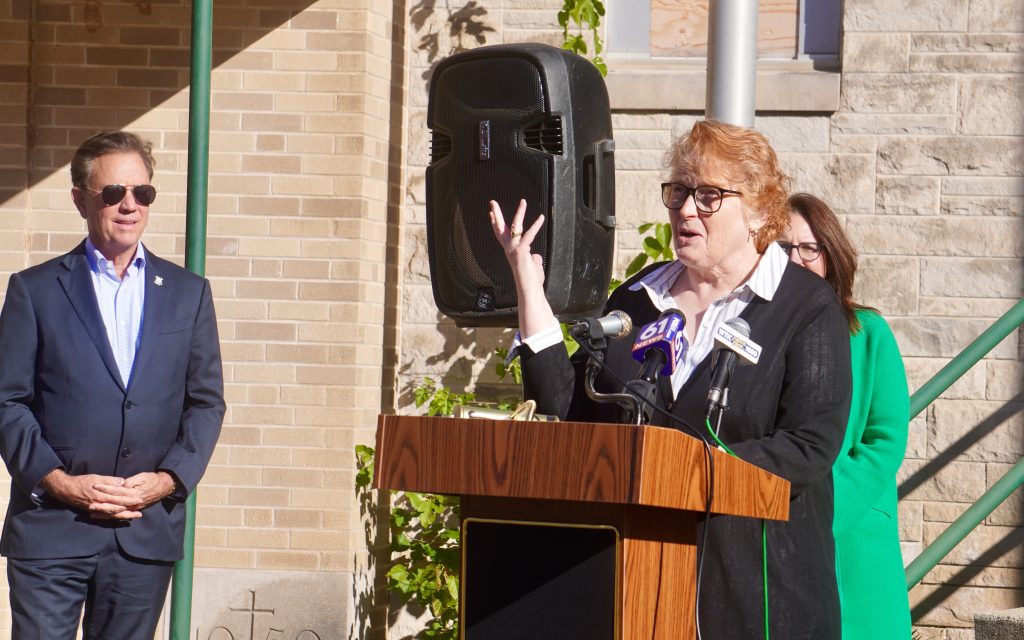 Margaret Hann, executive director of The Bridge Family Center, speaks at the announcement of West Hartford’s purchase of the former St. Brigid School at 100 Mayflower St. as the site of a new Elmwood community and cultural center. Photo credit: Ronni Newton

The Teen Center was founded in 1969 – at the same time as the Bridge – and initially had its home base in a cleared out supply closet.

“Today the Teen Center is a thriving program – offering young people a safe, non-judgmental space to have fun, and talk out their dreams and fears with each other and Bridge staff,” Hann said, something needed now more than ever. The Teen Center helps develop community leaders and coordinates service projects, and is visited by more than 2,000 people per year on average who will look forward to the new space, she said. 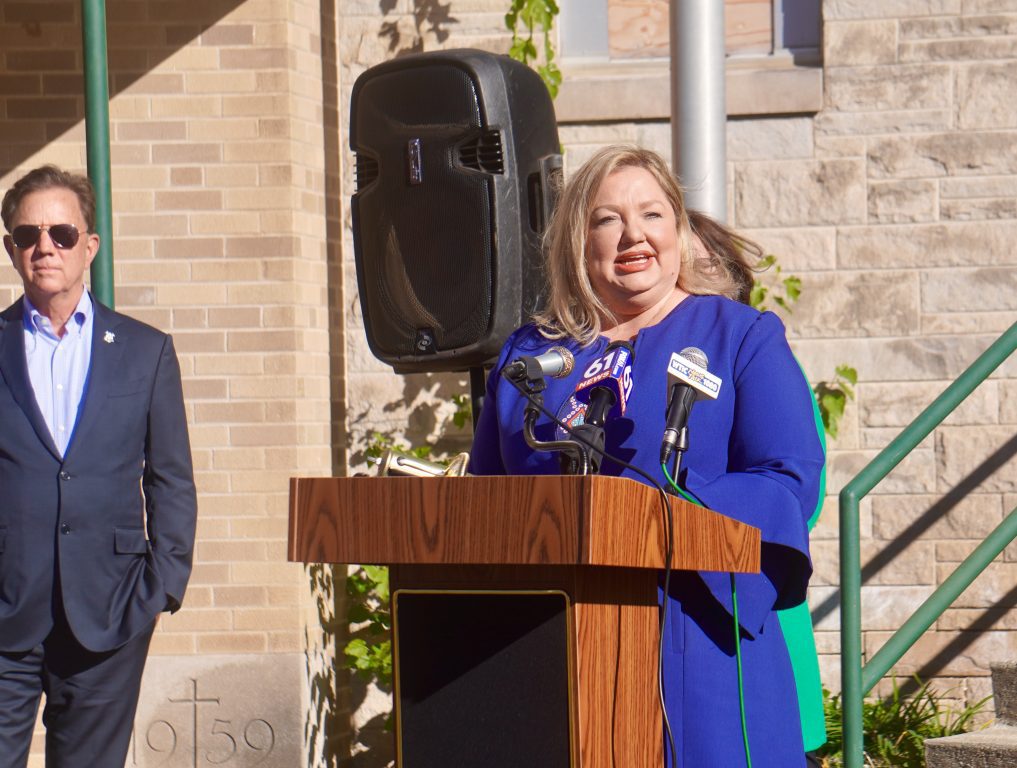 Rebecca Sears, director of West Hartford Senior Centers, speaks at the announcement of West Hartford’s purchase of the former St. Brigid School at 100 Mayflower St. as the site of a new Elmwood community and cultural center. Photo credit: Ronni Newton

“We are very excited about the prospect of a new community center on this site to anchor this neighborhood and to embrace the wider community, including a vibrant señor center,” said Rebecca Sears, new director of the West Hartford Senior Centers. “This community center will be a place that welcomes and supports many facets of our town, while serving multiple generations,” allowing for the opportunity to maximize services for all residents.

Pramod Pradhan, community engagement librarian for the West Hartford Library, said he interacts with the individuals and organizations who use the Faxon Branch library on a daily basis.

While the building itself has its challenges – including with the HVAC system and basement flooding – keeping a branch in Elmwood is important for accessibility by foot or bicycle by its diverse population, and having the library next to Beachland Park will also be an advantage. 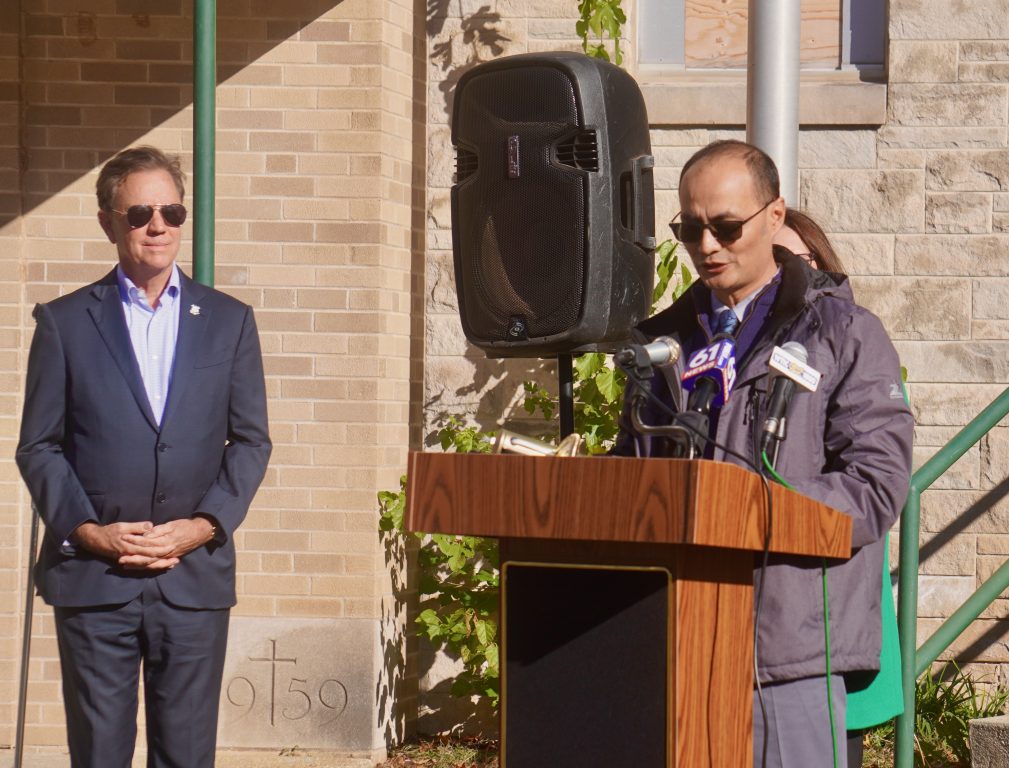 “I have been living in Elmwood since 2004, the year that my family and I came from Nepal,” said Pradhan. “I have seen Elmwood change over the years for good and become more diverse and even more active as new businesses opened and new housing complexes were built. Faxon Library has been and always will be an asset, a place of coming together – welcoming, a place of learning, and a community hub for Elmwood.”

The new building will allow the library to expand its outreach and programming, and provide important business resources and a space for socialization. “This can be a place where individuals not just come to look for content but can create content themselves. Patrons can use the library to gain knowledge in order to create their own new and independent works by learning to code, create podcasts, vlogs, and make and edit videos, create artwork, maker space, and many more,” Pradhan said. 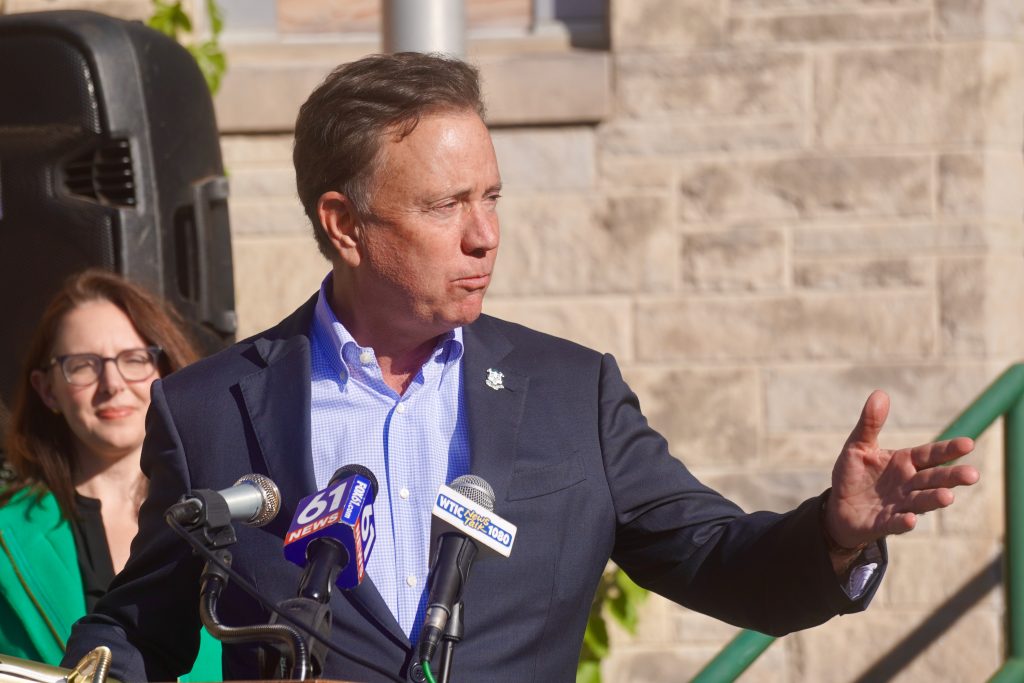 Gov. Ned Lamont speaks at the announcement of West Hartford’s purchase of the former St. Brigid School at 100 Mayflower St. as the site of a new Elmwood community and cultural center. Photo credit: Ronni Newton

Lamont said he loves West Hartford, loves the town’s vibrant center and its diversity, and the fact that people look out for each other.

“Listening to what this means to this community, I’m just reminded … community doesn’t just happen. There are a lot of building blocks that go into it,” he said.

The Elmwood Community Center is an important component of that, and a space for community engagement and participation, and Lamont said he is glad the state was able to partner with the town to create a new community center. “When this is new and renovated, it’s going to be amazing,” the governor said.

The town had already budgeted a total of $6 million for the project in the Capital Improvement Program – $3 million in the current fiscal year and $3 million in the following fiscal year. Following the feasibility study, combined with an outreach campaign, more concrete plans will begin to take shape.

According to West Hartford Town Manager Matt Hart, virtual and in-person meetings will take place, and he will also recommend that the Town Council establish an advisory committee of stakeholders from key organizations.

“We think this is going to be a multi-year project,” Hart said.

It is likely that most, if not all, of the current building will need to be demolished, and that will be determined following the feasibility study, Hart said.

In the meantime, use of the existing property will be, perhaps holding leisure service programs in the gym, Hart said. Public safety employees have already used it for training purposes, he added. 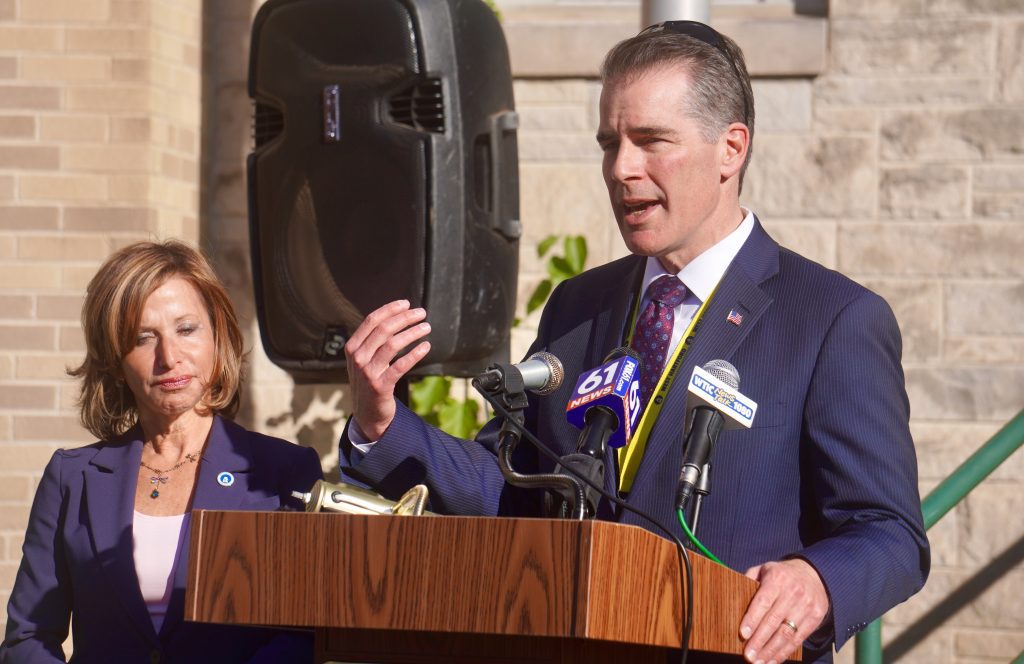 Town Manager Matt Hart and Mayor Shari Cantor at the announcement of West Hartford’s purchase of the former St. Brigid School at 100 Mayflower St. as the site of a new Elmwood community and cultural center. Photo credit: Ronni Newton