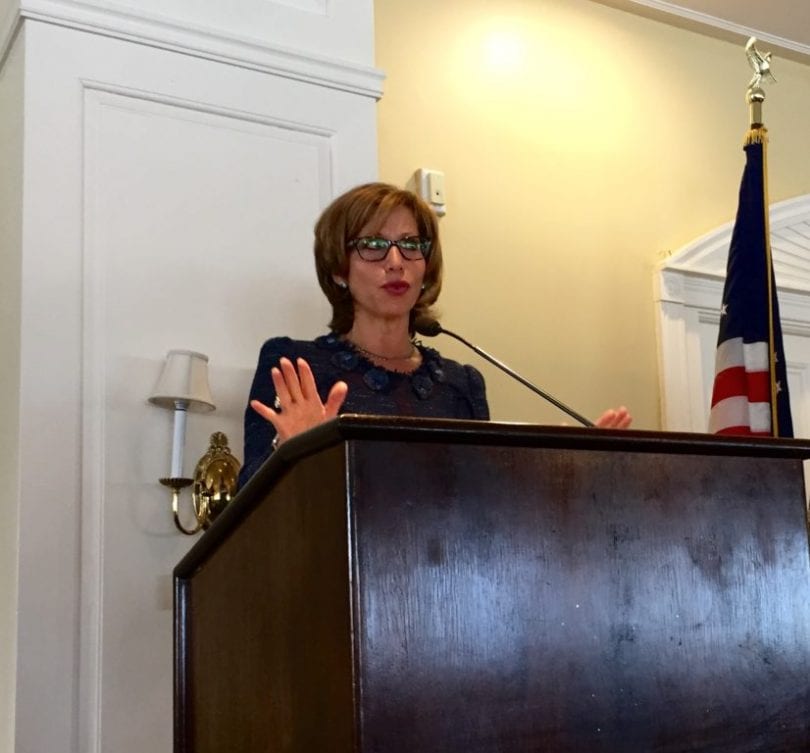 West Hartford Mayor Shari Cantor, in her first State of the Town Address, gave her vision of planned change for the future. 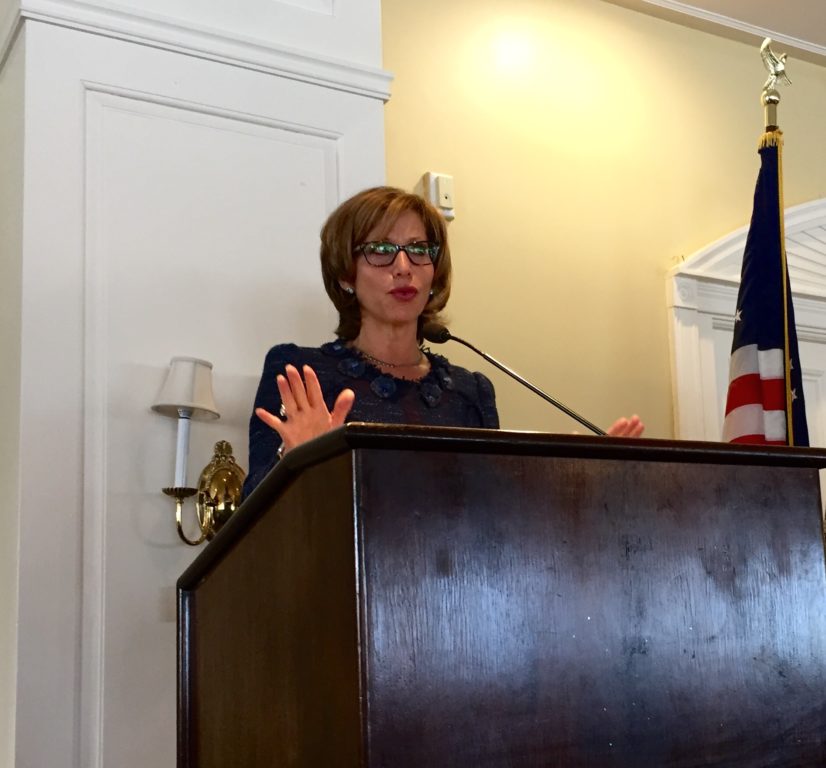 West Hartford Mayor Shari Cantor stood at the podium at Hartford Country Club Thursday and in her first-ever State of the Town address, announced that “The state of the town of West Hartford is really strong.”

Cantor got laughs and a round of applause when she joked that this was “the largest audience to ever to witness the state of the town speech, period.”

In her speech, Cantor, who was previously deputy mayor and became mayor in May after the resignation of Scott Slifka, provided a look back at the past year as well as her vision for the future. Important to that future will be the hiring of a new town manager, a process which is underway.

“We are in really, really good shape, and it is because of fabulous leadership,” Cantor said.

She highlighted the recent Money Magazine ranking of West Hartford in 15th place among small cities – of which there are more than 16,000 in the country. Even being ranked in the top 100 would have been great, Cantor said, but to be no. 15 is remarkable.

“And that’s just one of our recent accolades. There are many, and we deserve them … because we are a vibrant, diverse, and safe community with top-notch schools. We have really quality municipal services, highly engaged citizens, and many social and cultural events, and it all makes our community richer.”

Cantor said West Hartford has an innovation factor because the town has smart people, great ideas, and collaboration.

The three pillars that continue to make the community so successful are “safety, schools, and stability,” she said.

“I think West Hartford has the best police force and fire departments in the state of Connecticut and I would say probably in the country,” Cantor said, receiving a round of applause.

She noted that Police Chief Tracey Gove is forward-thinking and has been a national leader in fair and impartial policing and implicit bias training. Crime levels have continued to decrease, and any “blips” have been addressed.

The fire department provides paramedic service 24/7, and the service is not only much better but results in cost savings to the town.

The schools are increasingly diverse on so many levels – racial, economic, religious, and learning style. “And we are so proud of that,” Cantor said.

She touted the brand new, state-of-the-art Charter Oak International Academy building – 80 percent of which was funded by the state – which opened in the fall, and the continued ranking by U.S. News & World Report of both Conard and Hall high schools in the top 10 for the state and the top 500 nationally. “We’re one of the few municipalities with two high schools in that high ranking,” said Cantor.

“We are financially sound and stable,” said Cantor, holding a AAA by both Moody’s and Standard & Poors for more than 40 years. Cantor said that on Wednesday S&P’s rating revised the view of the town’s management to “very strong” from “strong.” She thanked both CFO Peter Privitera and Town Manager Ron Van Winkle for achieving that.

“We have a growing tax base and we continue to attract development all over town. Businesses want to be here and people want to be here,” Cantor said. “We don’t offer tax rebates or incentives, we just have the right environment.” The town is fortunate to be able to attract the types of business it wants.

Some exciting business developments noted by Cantor include the Delamar West Hartford Hotel which plans to open in late spring, Chick-fil-A which will open Feb. 9, Seritage Growth Properties’ redevelopment of the Sears and Sears Auto Center buildings which was just approved Tuesday night, and the continued proliferation of restaurants – and more workout places.

There have also been major residential developments completed in 2016, among them 100 of the 160 units at the Residences at Steele Road which are leasing well, and 84 additional units at Chatfield Assisted Living.

Transit-oriented development in the New Park Avenue corridor will get a boost from 616 New Park which is now under construction near the Elmwood CTfastrak station and will include 12 units for veterans and 54 additional market-rate and workforce units. Arcadia Crossing, with 310 units at the corner of Park Road and Prospect Avenue, has been approved but may still return to the Town Council with some requested modifications, she said.

The town has also experienced building permit growth – an increase this year from 5,600 in the past two years to 6,233 and have seen steady growth over the past decade.

The town has done what it can to minimize tax increases, including negotiating changes in health and pension plans, moves that other municipalities are just now making. “We’ve really done a lot of hard work,” she said.

“We are in the people business. We provide safety, education, and extensive services  to our community but of course we always balance this with cost,” said Cantor, by doing things in the most efficient way possible.

“Also we really care about the people touch and making lives better for our people,” said Cantor, highlighting the Town That Cares Fund, services for seniors, and possible upgrades to town parks.

This year’s budget challenges will include the MDC, the state’s $1.5 billion shortfall and what may happen to ECS funding. The Connecticut Conference of Municipalities just issued a report looking at the state’s tax structure which is limited to property and income taxes, and has some ideas on diversifying it – including highway tolls, changes in the state sales tax to allow municipalities some autonomy to levy their own taxes and keep the revenues, and adding a hotel and food tax.

“West Hartford’s in great shape. We have some significant challenges but we think there are ways out,” she said. “I don’t think we should panic. I think there’s a very thoughtful way and it may take some courage from the state legislature.”

Looking Ahead to West Hartford in 2030

Cantor used the year 2030 as her focus for the future. “We really need to be a  leader for the state of Connecticut and the country. As you heard, I think we are,” she said.

Millennials – those born between 1980-2000 – are the biggest generation, Cantor said. There are 92 million of them, compared to 61 million Gen X-ers and 77 million Baby Boomers.

The Millennials are entering the workforce and making life decisions. “They have been subject to incredibly active change and they’re used to reacting  … globalization and economic disruption is the norm for them,” said Cantor.

Millennials tend to be renters, and like to live near action. A majority say if given a choice they would most like to live in an inner ring suburb, she said.

West Hartford needs to focus its future on the needs of the Millennials, and what they want is quality of life, diversity, vibrancy, and safety. They are into sharing economies, exercise more, and eat healthier and at the same time eat out more.

One of the things Millennials have to have is high-speed broadband, Cantor said. “They are coming from college campuses where they have gig service and they don’t want to have to pay the prices of Comcast and Frontier bundled packages now. They pick and choose what they want … and they spend a fraction of what we do,” said Cantor.

Cantor has been very involved with the fiber-to-home push, and thinks that will be an important attraction to people. “We want to make sure that we bring that quality [to West Hartford].”

The town is beginning to develop a new “Plan of Conservation and Development” which will be used as a guide for the next 10 years focused on “what is best for our town as a whole, what is sustainable, environmentally responsible, what are the trends.”

There continues to be a lot of interest in residential around our centers, as well as in “entertainment experience.” The Town Council is working through zoning on how to allow that flexibility, she said, without changing the character and safety of the community.

The pop-up dog parks have been “phenomenal,” Cantor said, and a great solution while looking for a permanent location.

Other possibilities for the future include sandlot volleyball and allowing food trucks in industrial locations. The town has changed its zoning to allow breweries – with New Park Brewing set to open. “Food trucks marry very well with breweries,” she said.

“Sustainability … complete streets policy that is really essential, our greenway that we’re completing … the way we do trash” are critical for the future of the town.

“We need think ahead, we need to make sure that West Hartford remains a leader in the area, a draw for the Greater Hartford community, and keep the quality of life that we have been so honored to have in West Hartford,” said Cantor.

“You’re all business leaders. You know that if you stay the same you’re actually going to fall behind,” said Cantor.

In closing, Cantor quoted Abraham Lincoln: “The best way to predict the future is to create it yourself.”

“That’s our mission and that’s our goal,” she said.

“I think we will remain one of the best communities to live, work, and play in our state and in our country.”

West Hartford Community Television streamed the speech, and it can also be viewed on their website by clicking here.