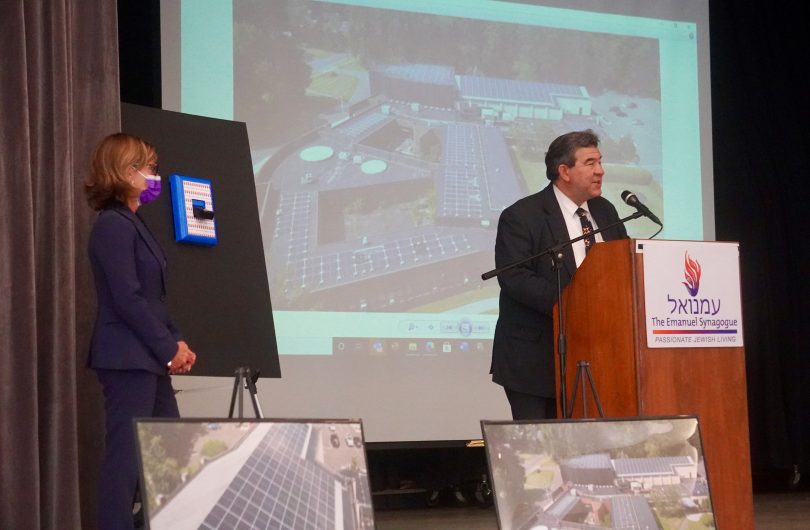 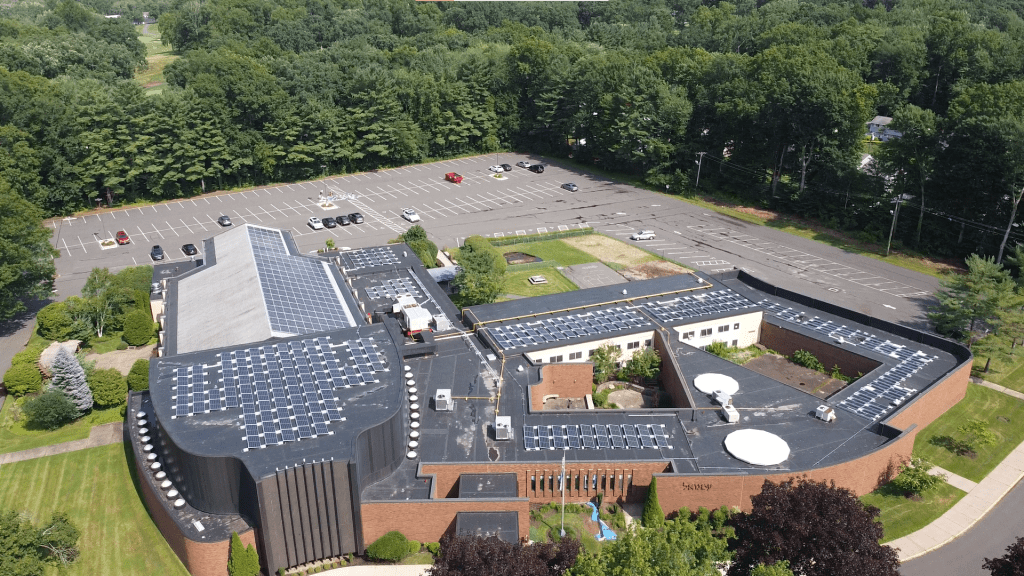 Solar array on the roof of Emanuel Synagogue. Courtesy of Verogy

West Hartford Mayor Shari Cantor flipped a virtual switch while Rabbi David Small led a blessing Thursday, celebrating the energizing of the newly-completed solar installation on the roof of Emanuel Synagogue – a first-of-its-kind project in the state.

“Let there be light,” Small exclaimed, as wishes of “Mazel Tov” and applause from members of the congregation and others who attended the celebration filled the room. 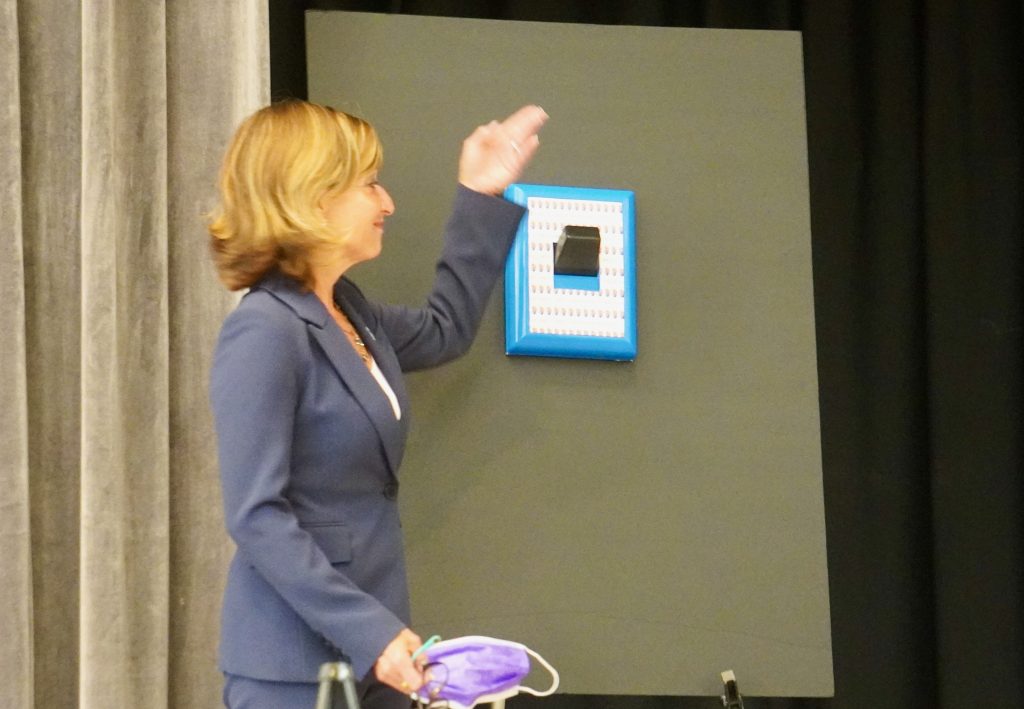 Emanuel Synagogue partnered with Hartford-based solar developer Verogy for the project, which incorporates a 20-year Power Purchase Agreement (PPA) under which the synagogue will purchase power at a lower rate than what it currently pays its local utility. Verogy, which owns the installation, has partnered with the Connecticut Green Bank, and this project is the first privately-funded PPA project to utilize the Green Bank’s Commercial Property Assessed Clean Energy (CPACE) program for financing.

The 178 kW DC system will produce 198,000 kWh annually – the equivalent of powering 16 average homes annually with clean energy. The carbon savings is roughly equivalent to the emissions of 30 passenger vehicles.

“When you behold this project and see think about what it means, indeed it is very, very good,” said Rabbi Small, noting the connection to light and the sun. 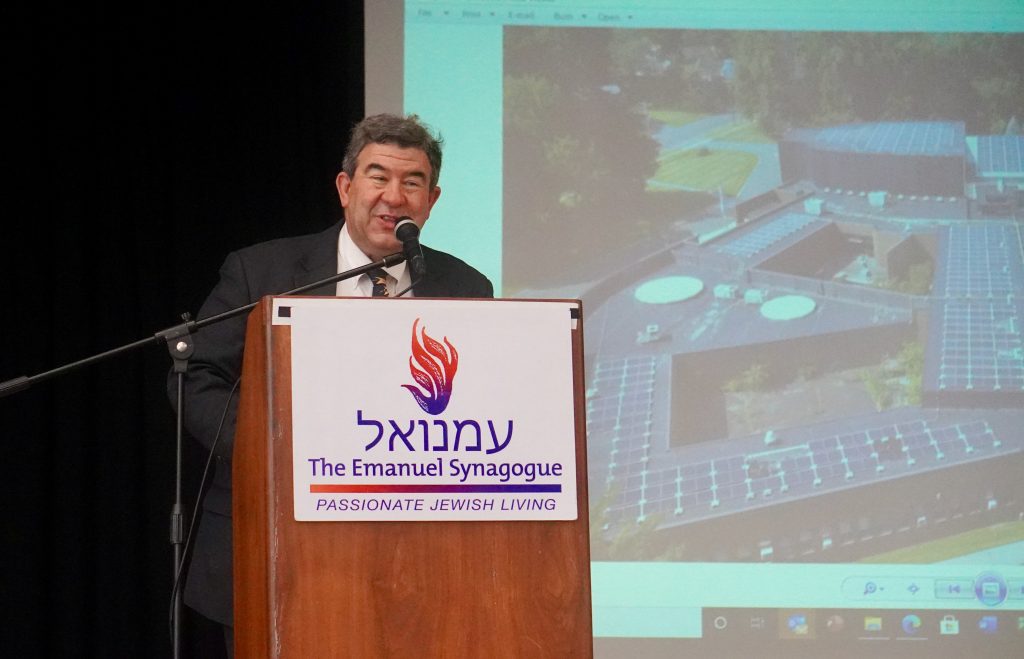 “God saw the light and the light was good,” Small said. “Today is the first day of the rest of our life of moving toward being a fully sustainable synagogue and in an energy sustainable town, and a nation, and a world,” he said.

“May future generations benefit from the steps we take today,” he said.

He added that an extra piece of joy and pride is that Jenna Behan, a 2015 Hall High School graduate who works for Verogy and was present at the celebration, shared her Bat Mitzvah at Emanuel Synagogue.

“It’s very important for our business to stay ahead of the game,” said Will Herchel, CEO of Verogy. While this is not a huge project, he said, “Every step that we take is really a step in the right direction.” 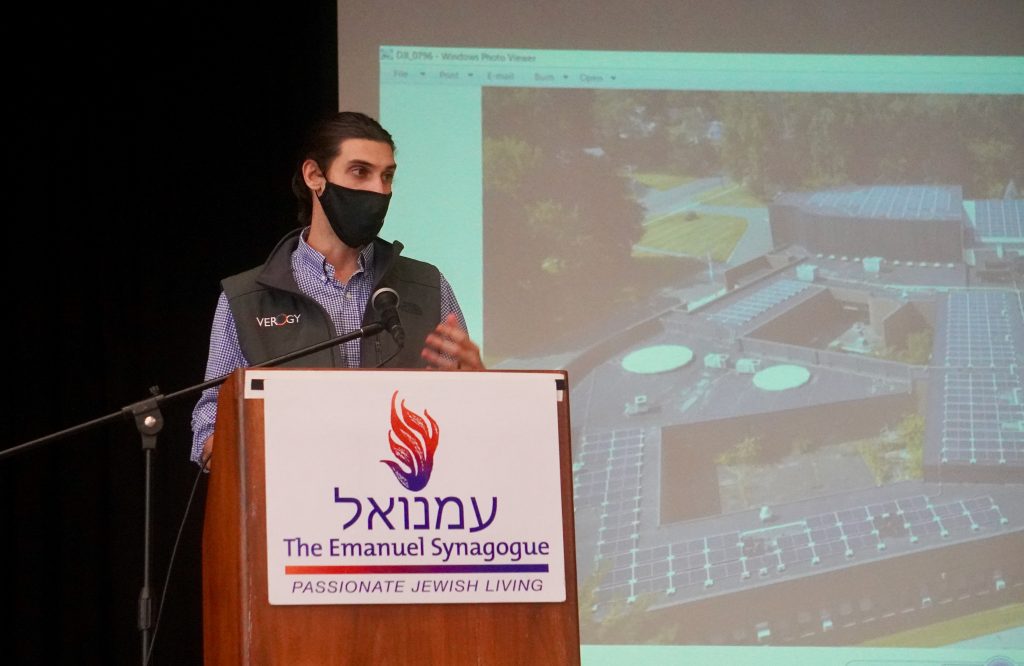 Will Herchel, CEO of Verogy, speaks at a celebration at Emanuel Synagogue on July 29. Photo credit: Ronni Newton

Herchel said he appreciates the Connecticut Green Bank for their flexibility and promoting the types of opportunities for flexibility in financing energy options. No up-front capital was required for this project, he said.

Verogy has already partnered with the Town of West Hartford for solar installations at Town Hall and King Philip School.

Cantor noted that the town recently adopted a new aspirational and inspirational Clean Energy Plan and projects like this are a great example of what the community hopes to achieve – utilizing all clean energy throughout West Hartford by 2050.

Including the two Verogy projects the town has a total of 12 solar installations and also, through virtual net metering purchases 100% of its energy from renewable sources for town use, a goal achieved in the past year. In 2020, Cantor and the town won the top Climate Protection Award from at the U.S. Conference of Mayors annual meeting.

“The only way we can get there is by partnering and encouraging our residents to make that transition, our faith institutions to make that investment, our businesses to see the importance of clean energy,” Cantor said of the next goal.

She said the town is looking for businesses and organizations to be community partners, but the effort needs advocates and champions. “Hopefully you will be an example to the community and throughout the state,” she said.

At the celebration, several individuals associated with Emanuel Synagogue who helped bring the project to fruition spoke about it to those in attendance. 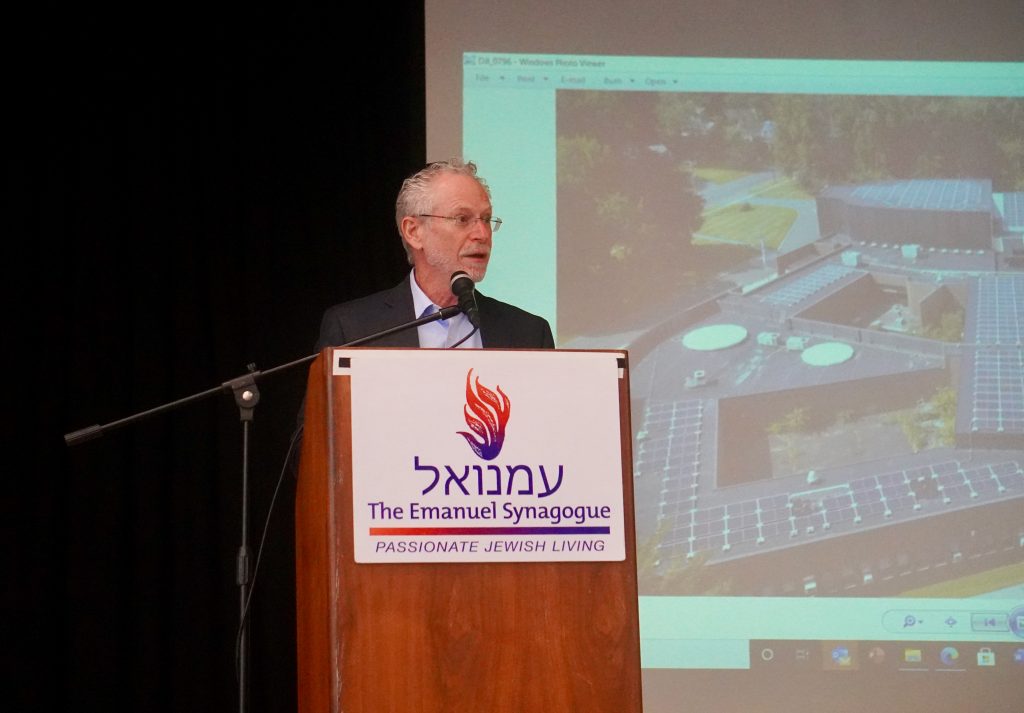 “The sun plays a role in our sacred text,” said Mel Simon, immediate past president of Emanuel Synagogue.

The solar project gained momentum, he said, when a member of the board began a sustainability initiative. Verogy helped them reach the finish line, he said.

Tom Mastronarde, project coordinator for Emanuel Synagogue, expressed his thanks to the Verogy team and praised their core values and the level of customer experience they have provided. 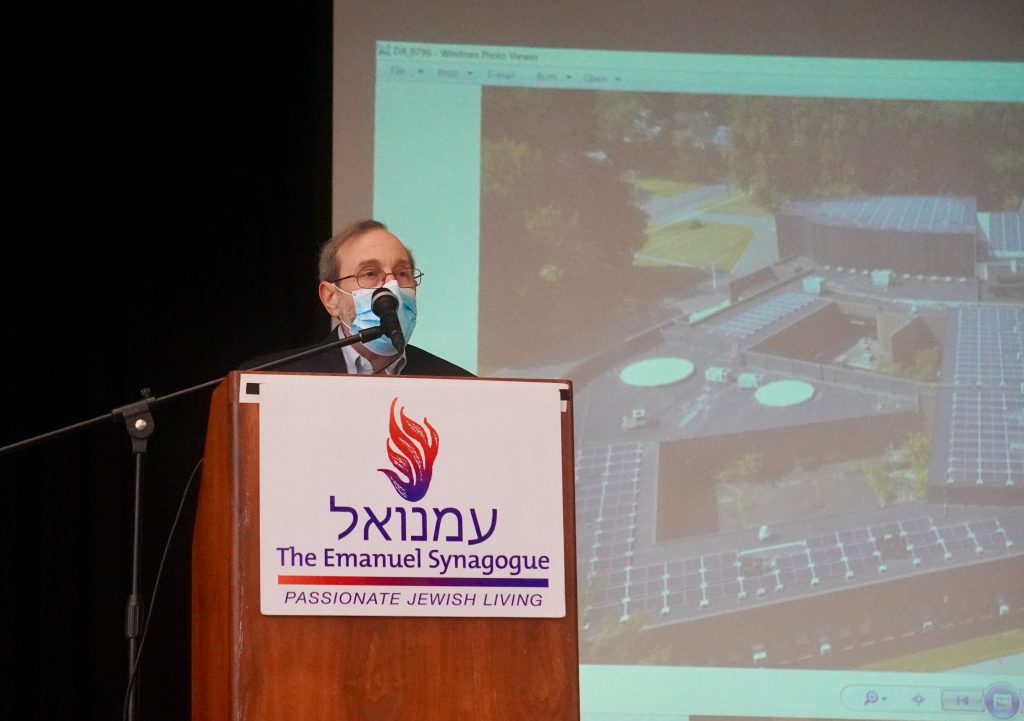 “We’re grateful for the opportunity to work with Verogy to make our clean energy vision a reality,” Mastronarde said. “Thanks to this project, we’re one step closer to fulfilling our obligation to preserve the environment. Additionally, the savings on our energy bill will provide a financial benefit for years to come.”

Small said Matronarde has been assisting the synagogue with energy savings for years in ways large and small – including discovering that a refrigerator in the building was using 12 time the amount of energy it should have and coordinating the replacement of light bulbs in the sanctuary.

The focus has been on smart energy usage, and now has turned to generation, with incentives for further savings.

“The [Verogy] system is set up not only to produce clean energy, but to create incentives for other good deeds,” Small told We-Ha.com. Without any further reductions in usage, the synagogue will be able to generate enough energy for 90% of its needs, but he anticipates giving back energy through net metering, and looks forward to the day when energy can be stored.

“This project enables us to devote more resources to important synagogue missions, including fulfilling our obligation to preserve and improve the world around us by reducing the purchase of electricity produced by fossil-fueled power plants,” said Ken Simon, president of the Emanuel.

“It really is inspiring to see you all living your values,” said State Sen. Derek Slap. On behalf of the town’s state legislative delegation, he read an official citation issued by the General Assembly congratulation the Emanuel Synagogue for “the congregation’s path to becoming Shomrei Adamah, Guardians of the Earth,” and for their leadership and commitment to clean and renewable energy for present and future generations. 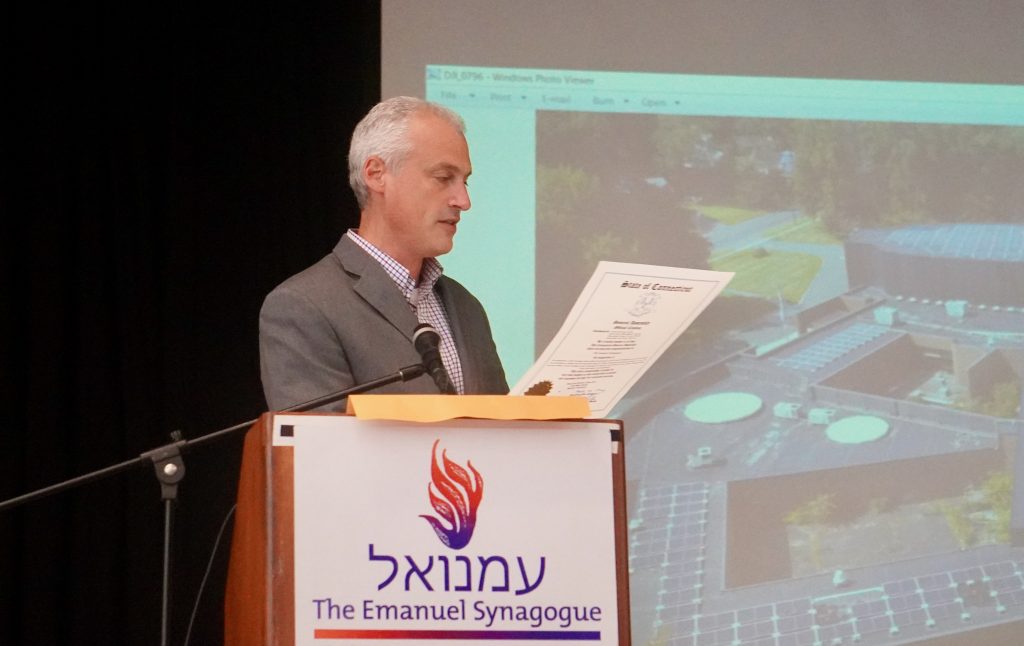 State Sen. Derek Slap read a proclamation from the General Assembly congratulating and thanking Emanuel Synagogue for being a guardian of the earth. Photo credit: Ronni Newton

“In light of the town’s commitment to clean energy, I am excited about the Emanuel Synagogue leading the way for green energy to be used in non-municipal buildings,” Town Council member Lee Gold told We-Ha.com. “I hope the congregation – of which I am a member – will appreciate the leadership role the synagogue has taken to improve our environment. I am sure this action will inspire others to follow the path of green and reusable energy.” 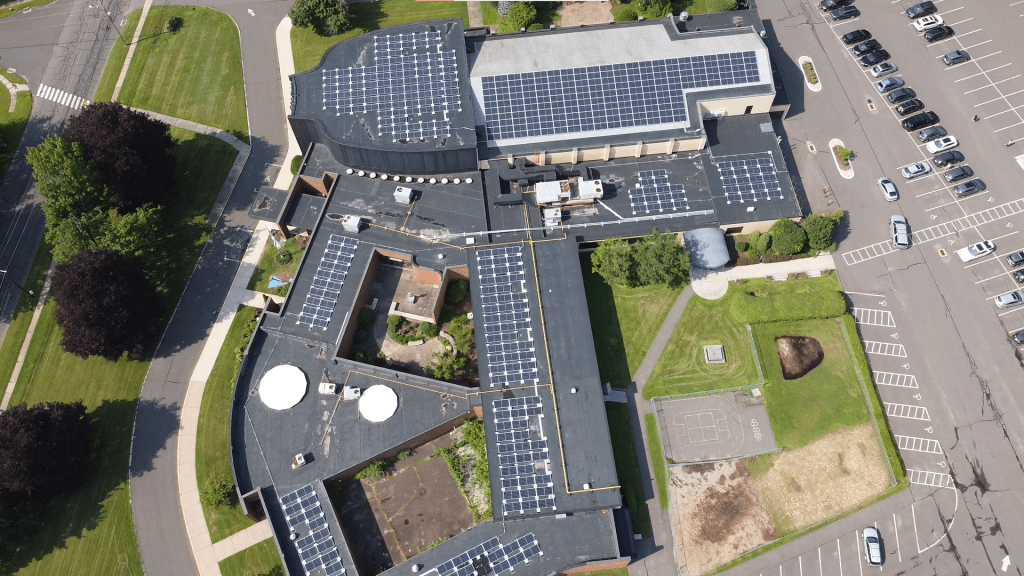 Solar array on the roof of Emanuel Synagogue. Courtesy of Verogy

“The electricity usage and available roof space makes the Emanuel Synagogue an ideal candidate for this type of project,” Bryan Fitzgerald, director of development at Verogy, said in a statement. “Now is the perfect time for businesses and non-profits to tackle the uncertainty around electricity rates by going green.”

“The realization of this project supports the Emanuel community in helping to fulfill the mitzvah of repairing and preserving the natural world with which we have been blessed,” said Small.

Small also noted that the founding fathers and mothers of the conservative synagogue blessed the congregation with a large flat roof, which helped in the move to go green. 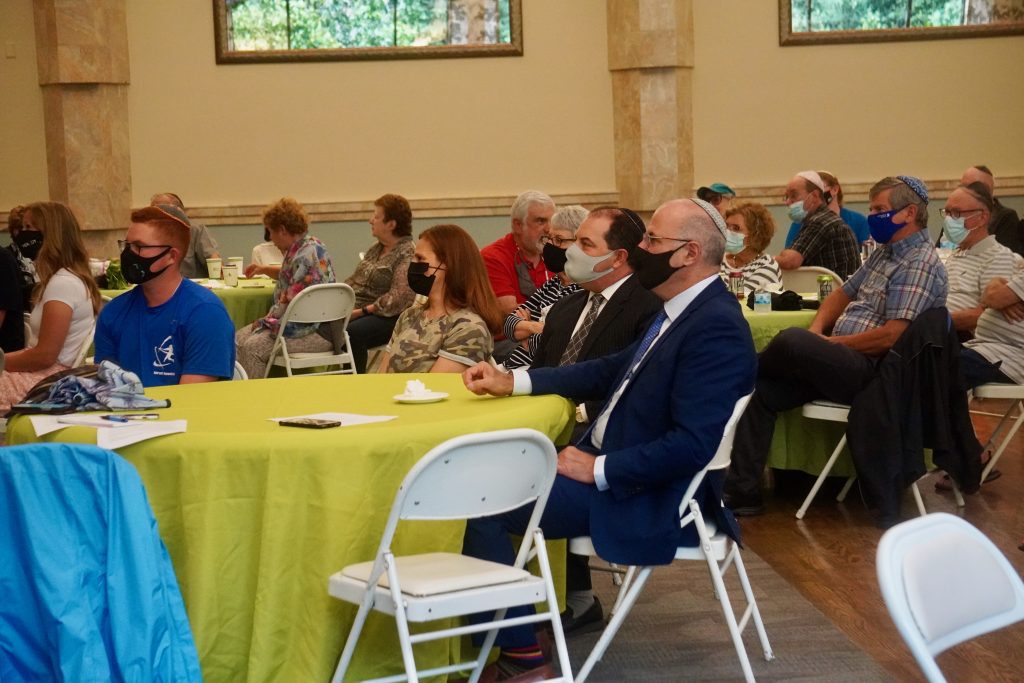 Members of Emanuel Synagogue’s congregation were among those who attended the celebration of the solar installation on July 29. Photo credit: Ronni Newton