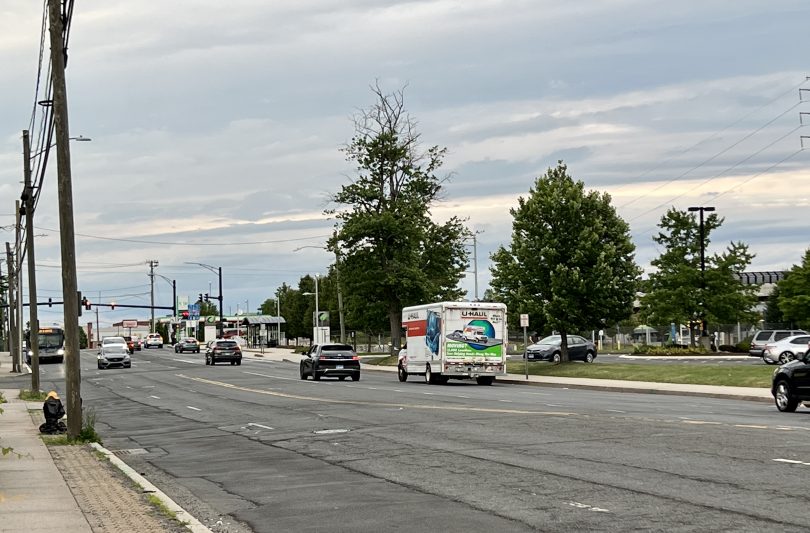 The area within a quarter mile of the CTfastrak stations at Flatbush Avenue (pictured) and Elmwood will become Transit-Oriented Development zones. Photo credit: Ronni Newton

The Town Council unanimously approved an ordinance establishing a Transit-Oriented Development Zoning District in the area within a quarter mile of the town’s two CTfastrak stations. 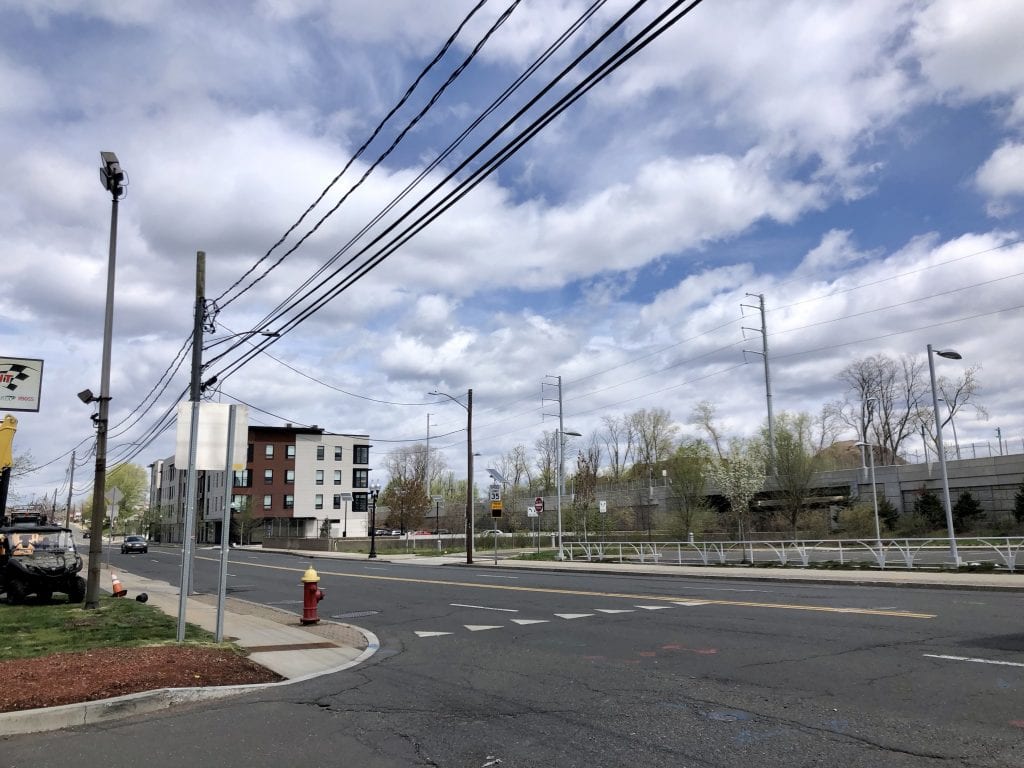 The West Hartford Town Council unanimously adopted an ordinance Tuesday night – the culmination of several years of work – establishing a Transit-Oriented Development District Zone in the areas directly surrounding the Flatbush Avenue and Elmwood CTfastrak stations, with the intent of promoting the creation of mixed-use, higher-density, pedestrian-friendly development that activates the streetscape and is accessible to mass transit.

The new Transit-Oriented Development (TOD) zone addresses land use composition and will allow denser development, including buildings that are one story higher than in any other zone (five stories, as long as the top floor is set back), as well reduced vehicle parking requirements. It also addresses streetscape design and urban form, and will require new construction to have street-facing entrances. The ordinance includes a variety of built-in incentives for developers to encourage affordable housing, fewer curb cuts, the creation of public space, and sustainability.

While the specific development of the TOD ordinance has been underway since April 2021 when significant outreach efforts began, it’s really the outgrowth of the development of the Complete Streets study six years ago, and a response to the goals set out in the town’s 2020-2030 Plan of Conservation and Development (POCD), Acting Town Manager Rick Ledwith said as he outlined the ordinance at a public hearing that preceded Tuesday night’s Town Council meeting. The ordinance has been reviewed extensively and was previously approved by the Council’s Community Planning and Economic Development Committee (CPED).

The TOD zone encompasses properties within a quarter-mile or less of the CTfastrak stations, and Ledwith said what he hopes will ultimately also be a CTrail Hartford Line train station that is planned for across the tracks from the Flatbush Avenue CTfastrak station. Encouraging lower parking requirements benefits the environment, he said, and TOD “contributes to a vibrant, livable, and sustainable community,” and will spur a very positive change in the town.

“This is a very, very important night for the Council,” Mayor Shari Cantor said. “This is a big deal, transformational.”

“This was really a long, continuous effort to draft the ordinance, revise it, and revise it again,” Cantor said, thanking town staff for their investment in the process.

While the state has tried to develop a broad TOD policy, Cantor said, “I really do hope that this sets the stage – we are in the plans for a train station but I think that this effort and this ordinance will highlight how important it is to West Hartford,” as the town focuses on access to multi-modal transportation.

The ordinance will encourage infill development in underutilized areas such as parking lots, rehabilitation, and redevelopment of property, Ledwith said. “TOD encourages lower parking requirements, which benefits our community by reducing energy consumption and greenhouse gases, and contributes to a vibrant, livable, and sustainable community.”

The “four D’s” of transit-oriented development, Town Planner Todd Dumais said during a presentation to the Council during the public hearing, are: distance (a five- to 10-minute or quarter- to half-mile walk from a transit hub); density (relatively high); diversity (a diverse mix of land uses to create vibrant live, work, and play opportunities); and design (pedestrian friendly, public realm building design, compact development, and well-designed parking to promote transit use). Those principles are related to zoning which addresses floor-area ratio (FAR) of buildings, building coverage and heights, parking requirements, diversity of uses; and design related to setbacks, orientation of buildings to activate the street, design standards, and parking, Dumais said.

The ordinance includes a mechanism that encourages sharing parking resources for uses that operate at different times of the day and a table that helps with the calculation of determining shared use applicability, and also, new to West Hartford, a minimum standard for bicycle parking for residential, retail, office, and restaurant occupancies, Dumais said.

The purpose of creating a TOD district, Dumais said, is to encourage development. 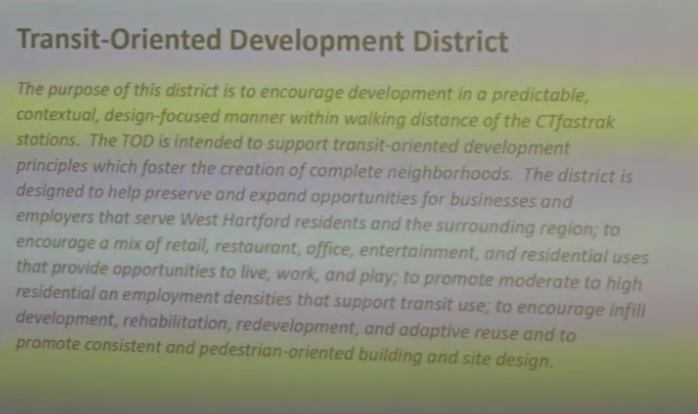 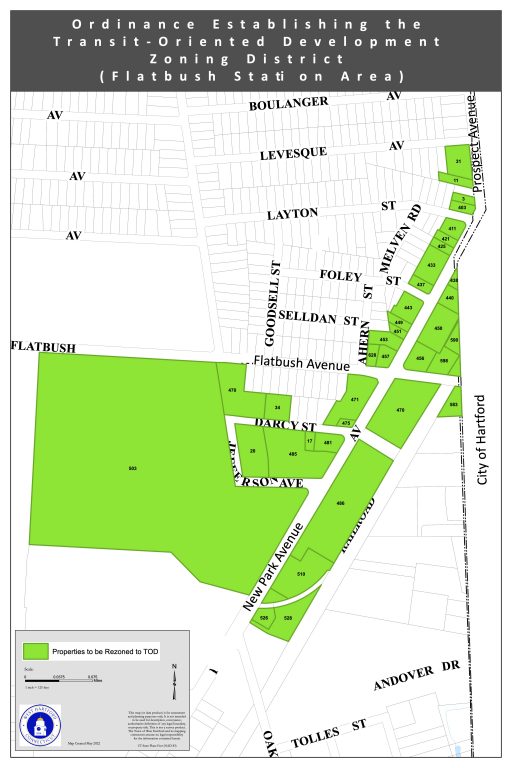 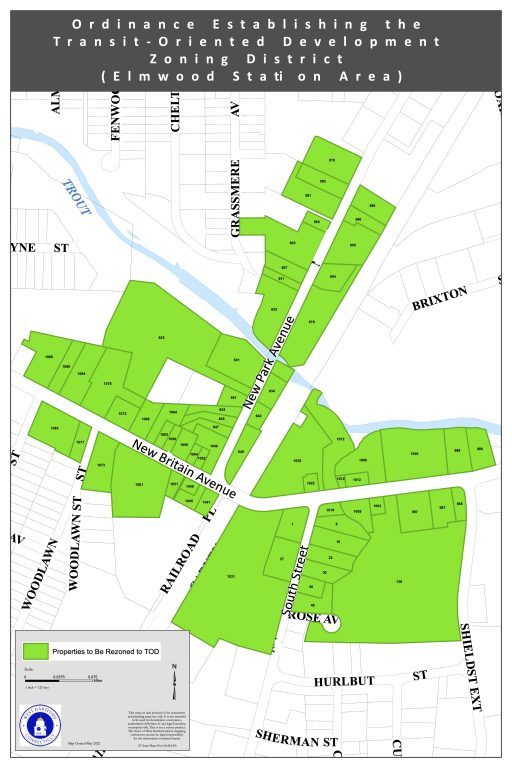 The bonuses available to developers in the TOD zone will allow for even greater FAR, coverage of building on the land, or further parking reduction, Dumais said. Bonuses can be earned through meeting a variety of criteria, including creating deed-restricted affordable housing for those with income at both the 60% of area mean income (AMI) and 80% AMI levels, for infill development, creation of pocket parks, and for sustainability measures.

“All development, with a few exceptions in this zone, would be subject to site plan or as of right administration approval,” Dumais said.

Longtime Council member Leon Davidoff, who previously served for four years as a member of the Town Plan and Zoning Commission, said zoning and development have made West Hartford what it is today – outdoor dining being a prime example that has turned the town into a regional draw. The most recent report on economic development indicates extremely low vacancy rates in all sectors, and not enough space to accommodate all who want to be in West Hartford, he said.

“We had a very extensive process with our plan of conservation and development … that acts as a roadmap for the next decade here in West Hartford,” Davidoff said. This TOD ordinance had extensive community engagement, with as much scrutiny as the Complete Streets policy that passed unanimously in 2015 – and builds on some of those goals.

The impact of development near mass transit is clear in large metropolitan areas, Davidoff said, noting that his daughters, who live in Chicago and New York, don’t own cars which allows them more disposable income for investment in experiences, and it’s something which, while on a smaller scale, will also work in West Hartford in the areas surrounding the two existing transit stations and, hopefully in the future, a CTrail station.

“This ordinance, I support it 100%,” Davidoff said. “It has the housing component, the public space component, the revitalization component, it’s environmentally friendly, it’s transformative, it’s comprehensive, it will support organic opportunities for economic development.” Those who support it, he said, will in the future consider it to be one of the greatest achievements of their Council careers.

Councilor Carol Blanks said she can’t wait to see the development that follows the TOD ordinance. “People are really looking forward to this and are excited,” she said.

While she has recently met some young people who have concerns about the affordability of West Hartford, “with what we are creating, keeping affordability in mind we can really knock this out of the park … I think this is a win-win.” Blanks added that it will be important to measure the effectiveness of the ordinance.

“This ordinance I think is really well done,” Cantor said. “No ordinance is perfect,” she said, but measures such as decreasing curb cuts, incorporating affordability incentives, commitment to sustainability, and encouraging  rehabilitation, redevelopment, and adaptive reuse will make the town better.

A TOD district will be “a little bit of Brooklyn in West Hartford, on the Hartford line,” Cantor said, adding that she while it will take some time to have impact, she thinks there will be development coming soon.

“This is not a plan, it’s a zoning ordinance that sets the stage,” Cantor added.

The Capital Regional Council of Governments commended the development of the ordinance and said it supports their plan of conservation and development, and West Hartford’s TPZ also unanimously supported it, noting that the ordinance furthers several of the town’s POCD action items – encouraging higher density in proximity to transit, encouraging infill, and creation of a new TOD district.

Erik Castiglione, speaking on behalf of the Elmwood Business Association, said the town also needs to address infrastructure and not just rely on private development for the TOD zone to be successful. “What can the town do to develop the bones to grow a healthy neighborhood?” he asked, suggesting the development of a vision specifically for the neighborhood.

Dr. Rick Liftig, who formerly served as president of the Elmwood Business Association, said it will be important for the Town Council to be able to track the success of the ordinance, and make changes if necessary. While its goal is appropriate for this time, the TND (traditional neighborhood design) overlay zone that has applied in the Elmwood area has actually prevented, rather than promoted, development, which was not the intent.

While zoning is an important role of the Council, “the goal of zoning not just to restrict but to develop the neighborhood,” Liftig said.

Along with the establishment of the TOD District, other improvements for New Park Avenue will be forthcoming. The town has secured $3.7 million in total funding for that work secured through multiple sources and design work is underway for long-planned updates to the streetscape, which are part of the New Park Avenue Complete Streets plan and include a road diet to slow traffic and increase safety, buffered bike lanes, landscaping, way finding signage, and sidewalk enhancements and other pedestrian amenities. The plan addresses New Park Avenue between Flatbush Avenue and New Britain Avenue, as well as the connection to the Trout Brook Multi-Use Trail.

The total construction cost is estimated at $3.8 million ($3.7 million will be funded through grants) and construction is expected to begin in 2023.

A complete copy of the TOD ordinance is included as a PDF below.