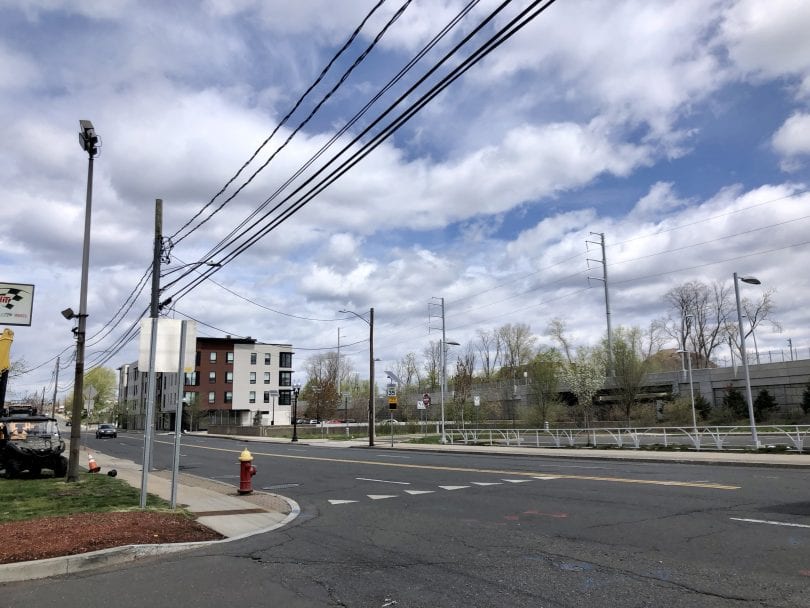 The Town of West Hartford has launched a survey and will also be scheduling public information sessions as a change in zoning is considered. 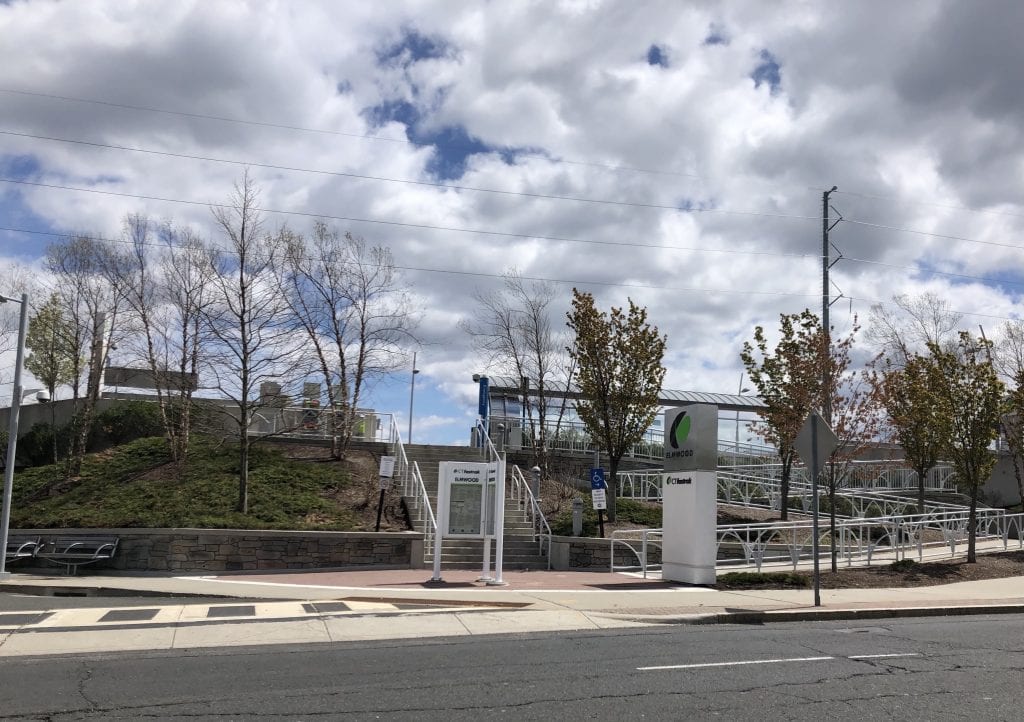 Multiples initiatives are underway in the New Park Avenue corridor, and the Town of West Hartford is embarking on an initiative to specifically re-examine existing zoning in the vicinity of the Elmwood and Flatbush Avenue CTfastrak stations, with the specific goal of encouraging transit-oriented development (TOD) in those areas.

Physical changes to New Park Avenue will soon be getting underway, with $3.7 million in total funding for that work secured through multiple sources. The town’s engineering department is currently in the design phase for long-planned updates to the streetscape, which are part of the New Park Avenue Complete Streets plan and include a road diet to slow traffic and increase safety, as well as sidewalk enhancements and other pedestrian amenities. The plan addresses New Park Avenue between Flatbush Avenue and New Britain Avenue, as well as the connection to the Trout Brook Multi-Use Trail.

With the infrastructure improvements in the works, Town Planner Todd Dumais said the process of updating the zoning in the area addresses another of the town’s longterm goals.

A survey, which will be open to the public through May 21, is a critical tool, Dumais said, as the town is looking for input regarding the existing environment around the two stations and preferences for the desired type of development in the areas. 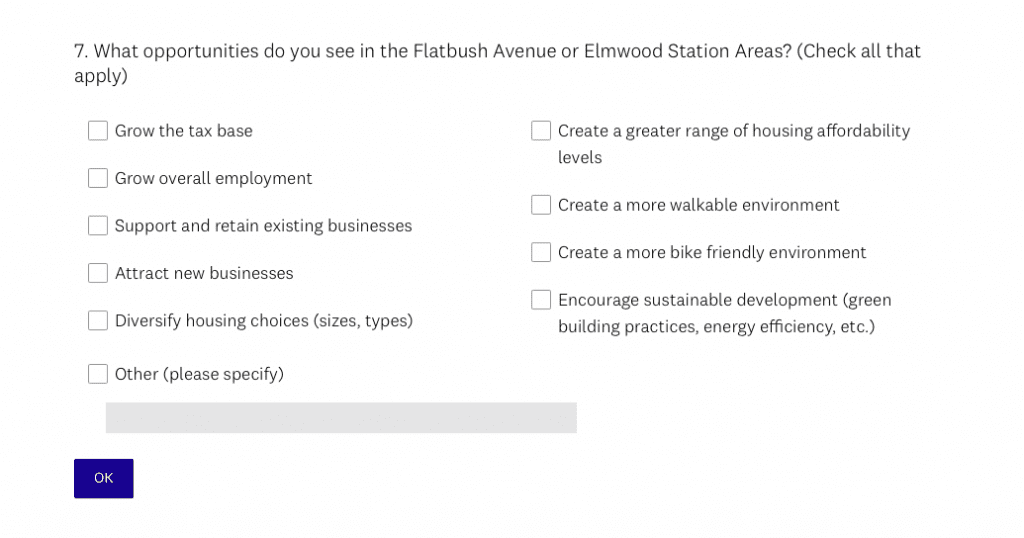 Transit-oriented development, broadly, refers to relatively high-density, mixed-use development located near a fixed transit station. The development is typically within a 10-minute walk of a station and is overall pedestrian-friendly in order to encourage use of mass transit, and offers non-automobile-dependent live, work, and play opportunities.

Expansion of TOD is one of the goals established in West Hartford’s recently-adopted 2020-2030 Plan of Conservation and Development, and through the survey and other public meetings and focus group workshops, which will likely be held in a virtual format this spring, the town will further refine its strategies.

“The purpose is to come up with the desirable TOD for West Hartford, what that should be,” Dumais said. “We want to come up with vibrant designs for people to live, play, and work.”

The initial plan is to start with a tight focus – within a quarter-mile of each of the two stations, he said. 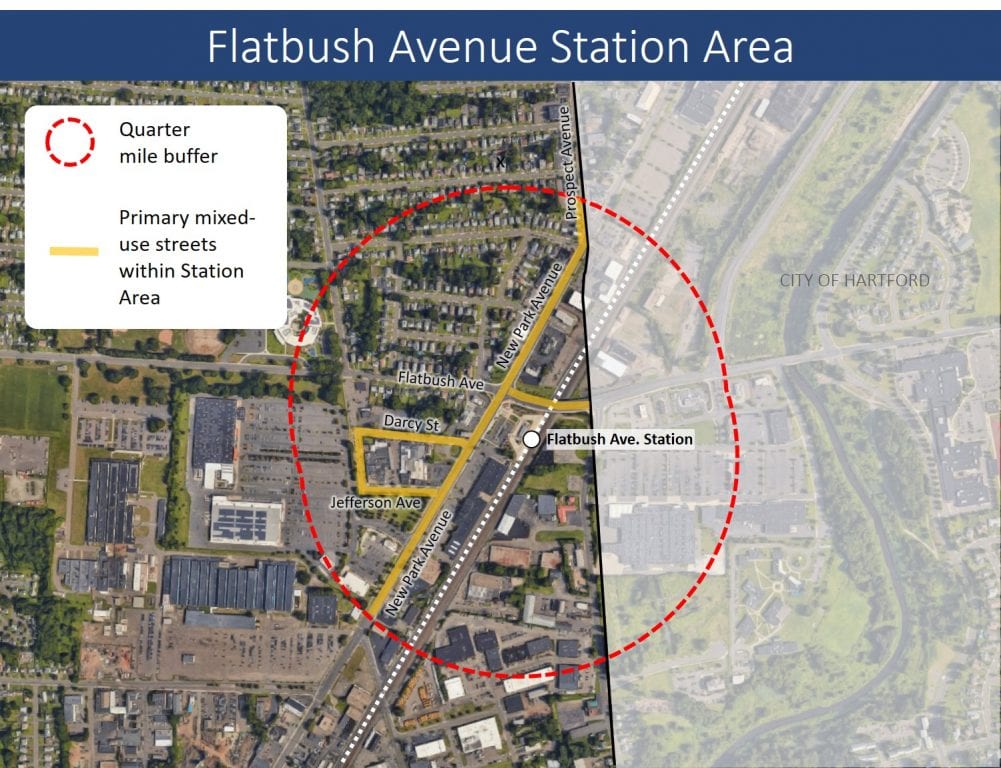 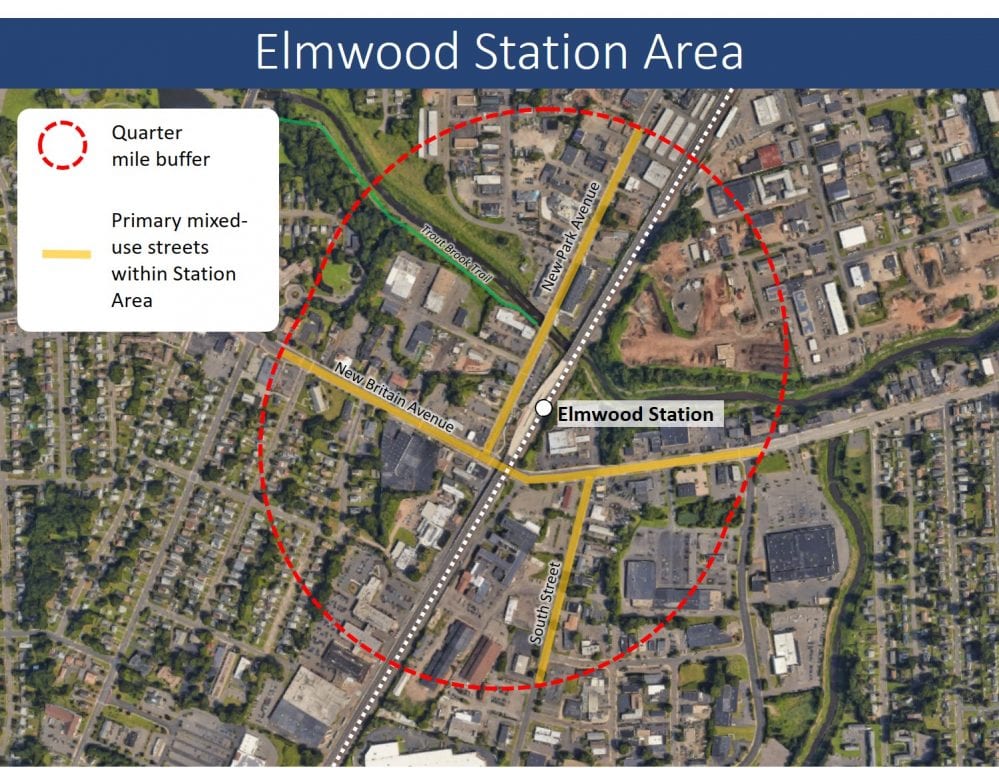 The survey – which can be accessed by clicking here – asks participants about their current usage of the CTfastrack stations, and also asks a number of questions about what type of development they think would be best for each of the areas, providing examples of varying levels of density, placement of buildings relative to the streetscape, and the location of parking. The survey will remain open through May 21. 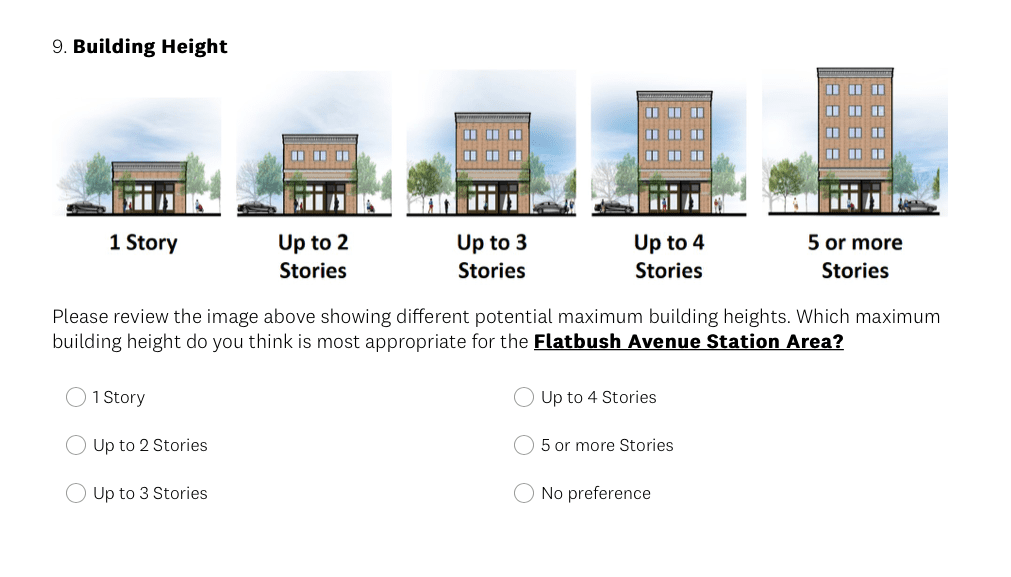 The results of the survey and input from the workshops will be presented in a report to the Town Council, along with zoning recommendations, possibly by late summer, Dumais said.

“There are good pieces already in place,” Mayor Shari Cantor told We-Ha.com, noting the award-winning 616 New Park Avenue mixed-use development as well as grant-funded road and streetscape improvements which are getting underway. The 540 New Park development, while technically just beyond the quarter-mile distance of one of the CTfastrak stations, is also an example of the type of TOD the town may want to encourage as it looks to be strategic with zoning. 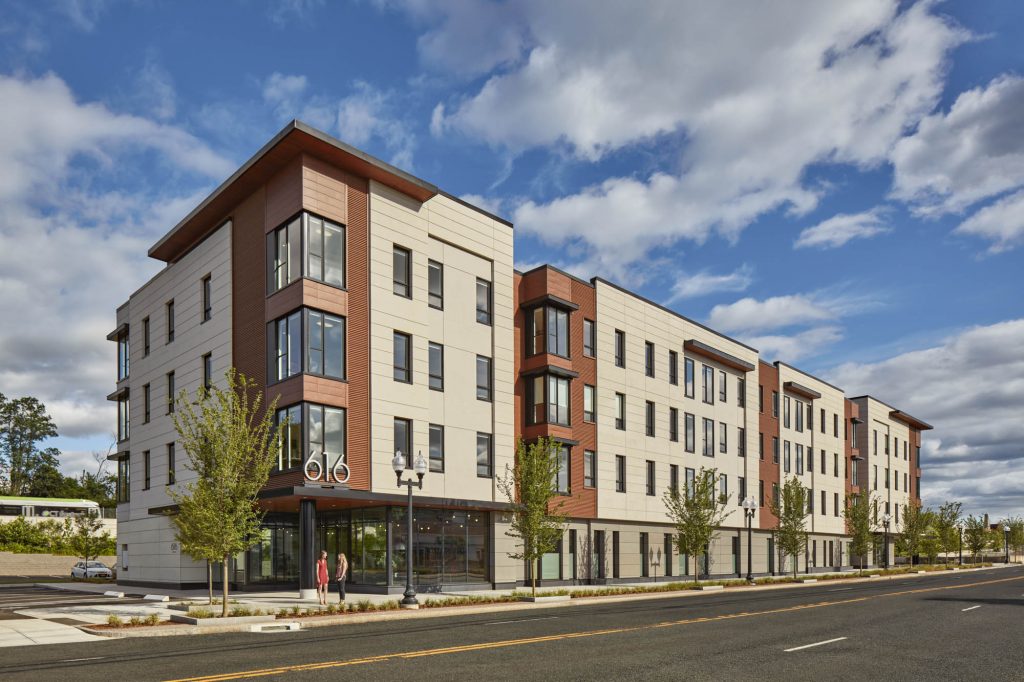 “This is an eclectic area in town, and there’s already an enormous diversity of business. We hope to preserve and enhance it,” Cantor said.

In late November 2020, the Town Council approved a nine-month moratorium on certain types of development within a quarter-mile of each of the CTfastrak station, to provide the opportunity for existing zoning to be reviewed and the consideration of new land use regulations.

The nine-month moratorium will applies only to lots in the business or industrial zone that are located within a quarter mile of either the Elmwood or Flatbush CTFastrak stations, and only to lots that front the following roadways: Darcy Street, Flatbush Avenue, Jefferson Avenue, New Britain Avenue, New Park Avenue, Prospect Avenue, and South Street.

While existing properties are grandfathered unless they are looking to expand their operations, uses that have been identified as “not supportive of transit-oriented development,” and subject to the moratorium, include: “car wash facilities; contractors yards; drive-in facilities/drive-up windows accessory to any bank, restaurant, retail, or pharmacy uses; junkyards; kennels; motor vehicle sales, service, and repair and gasoline service stations; nurseries and greenhouses, including sales area-goods pertinent thereto; outdoor storage of material and equipment; passenger automobile rental agencies; vehicle-intensive businesses; and wholesale business and storage warehouse uses.”

Dumais said there have not been any submissions to the town for projects that have had to be turned down due to the moratorium. 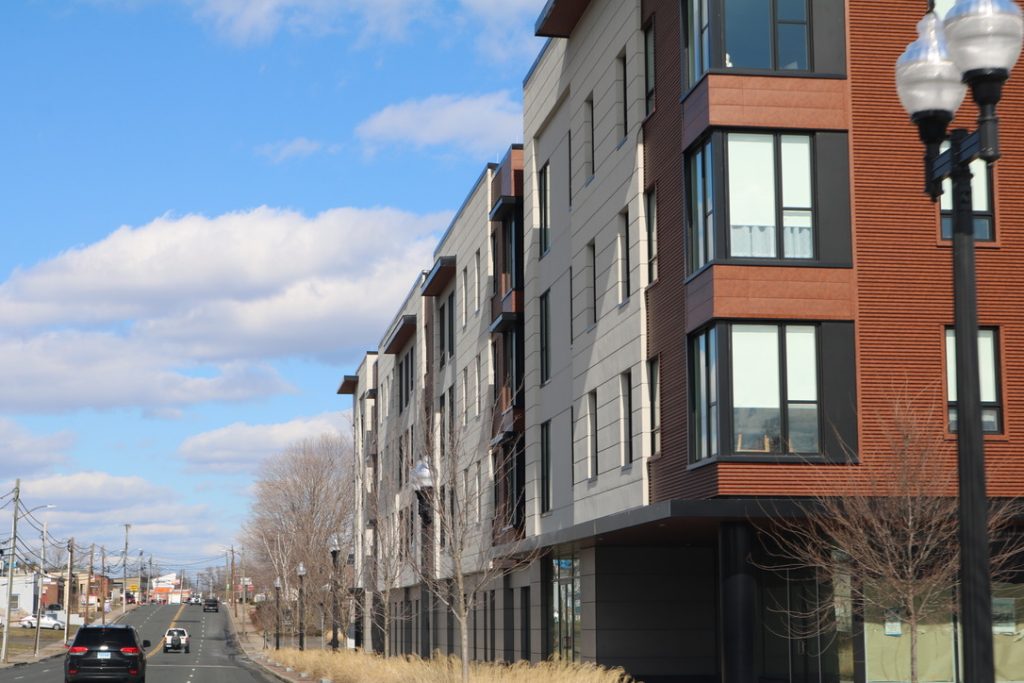 He also said there are not many non- or under-utilized properties currently in the area, but there is room for improvement where there are “seas of parking” that might be better served as becoming infill development.

“We want to avoid barriers,” Cantor said. “In the process of zoning, we hope to streamline things.” If a TOD zone is created, some projects – residential in particular – may be able to be developed “as of right,” without need to go through a lengthy and potentially costly application to the Town Council for a Special Development District.

The town is also in the process of developing an affordable housing policy, and is currently putting together an Affordable Housing Advisory Group. Creation of a TOD zone could dovetail with those efforts.

The West Hartford Housing Authority, through its development arm Trout Brook Realty Advisors, has been prioritizing investment in areas that are accessible to transit. In addition to the two projects on New Park Avenue, the Faxon Apartments at 1078 New Britain Ave., which are a short walk to the Elmwood CTfastrak station, are in the process of being transformed into state-of-the-art affordable housing.

“Affordable residential living and transportation are tied together. It’s part of the history of our town,” Cantor said, noting that original development along Farmington Avenue happened because of accessibility though extension of the trolley from Hartford.

“I am excited to be starting this process,” said Dumais. He said he is looking forward to hearing from the public, and continuing discussions about the vision for the New Park area that have been taking place for at least the past six or seven years.

Whatever plans or zoning recommendations that result will initially focus on “incremental infill with an eye toward future growth,” Dumais said. “The form and function of that is what will be determined.”

The corridor is also a federal Opportunity Zone, which means there are tax incentives available to investors.

As the New Park Avenue corridor evolves over the next several years, there is a still a plan on the books for a railroad station to be built in West Hartford, adjacent to the Flatbush Avenue CTfastrak station, which could make TOD an even more critical focus. “I hope there will be national investment in that infrastructure, and we want to be part of that plan,” Cantor said.

In a statement, Town Manager Matt Hart said,“Consistent with the vision, goals and associated strategies in the town’s recently adopted Plan of Conservation and Development, this survey will help gather data on usage habits; perceptions of the quality of the existing built environment; and preferences towards future opportunities for the Elmwood and Flatbush station areas. The town wants to hear from our residents, businesses, and taxpayers on the future of the station areas.”

The survey can be accessed through the following link and must be completed, and any comments submitted, by May 21, 2021: www.surveymonkey.com/r/WestHartfordTOD. Questions or written comments should be addressed to Town Planner Todd Dumais by email [email protected] or by mail to the following address: Town of West Hartford, Attn: Town Planner, 50 South Main Street, Room 214, West Hartford, CT 06107.

We-Ha.com is the place to go for the latest information about West Hartford – a town that "has it all"! We-Ha.com is part of and proud of our community, and we bring a hyperlocal focus to news and features about the people, schools, businesses, real estate, sports, restaurants, charitable events, arts, and more. Contact us at: [email protected].com or [email protected]