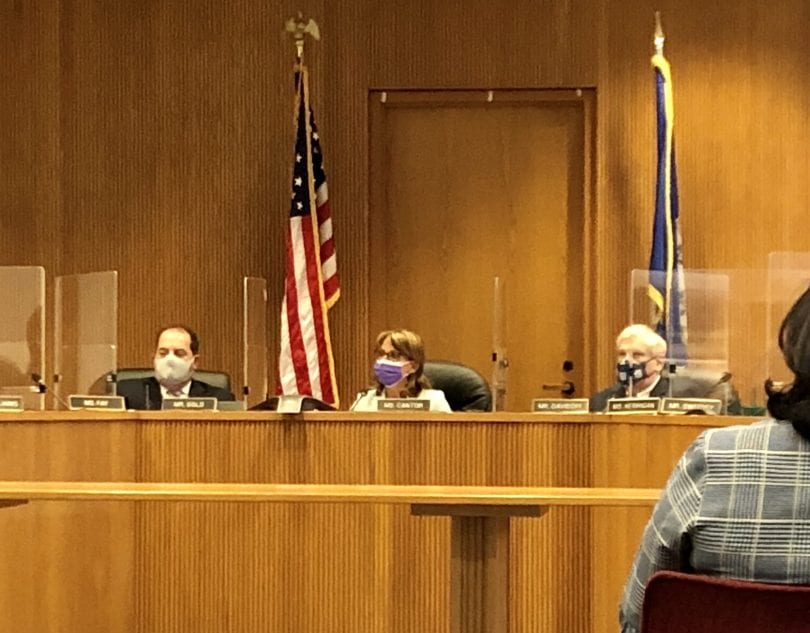 The names of the members of West Hartford’s Civilian Police Review Board were announced at the Town Council’s meeting Tuesday night and the appointments were officially approved.

The West Hartford Town Council unanimously adopted an ordinance establishing of a Civilian Police Review Board (CPRB) in February, and Tuesday night officially appointed seven members and three alternates who will begin their work effective July 1, 2021.

“I’m really thrilled to be able to do this tonight,” Mayor Shari Cantor said Tuesday.

Cantor noted that in West Hartford the process of establishing the CPRB was started by Police Chief Vernon Riddick and Town Manager Matt Hart, even before the state’s General Assembly passed its landmark police accountability bill that was signed into law last summer. With Tuesday night’s appointment, West Hartford becomes one of the first municipalities to have a CPRB in place.

The seven members and three alternates will receive extensive training before beginning their work, Cantor said.

Riddick said at last week’s Public Safety Committee meeting that the police department and Corporation Counsel’s Office had worked on the training modules, which are broken down into eight categories. The training will probably take about 24 hours over three days, he said, and will include use of an active shooter simulation.

The role of the CPRB will include reviewing the internal investigation of all complaints received by the West Hartford Police Department, and they will also annually provide the Town Council with a report and policy recommendations.

After outreach to the community to solicit volunteers to serve on the CPRB, there was enormous interest, with more than 80 applications for the positions.

“It was really inspiriting to see the interest, the passion, the support of our community, police – the real trust and the faith that this board would bring to the process of police accountability,” Cantor said.

“We were thrilled to bring a really diverse, qualified group of residents … we were so impressed by the applications and more impressed by those we chose,” Cantor said.

The members represent a diversity of life experiences and are spread geographically throughout town. “I know they are really going to enjoy working with each other … there will be incredible camaraderie,” she said, with respect for the police and the law.

“What I am most pleased about is the number of residents who stepped up once this was announced,” said Carol Blanks, who chairs the Town Council’s Public Safety Committee. She thanked them for agreeing to serve and noted that the members ultimately selected for the CPRB  “truly complement and represent our town from all sides,” and should be able to work collaboratively, listen, and truly be a citizen’s review board bringing transparency and accountability to the process and information to the chief.

“I think after all that hard work we’ve really come up with a good group of people,” Blanks said.

Minority Leader Lee Gold said he appreciated the work of the chief getting the process going.”We are so very fortunate to have so many qualified individuals step forward and volunteer their time in such a significant way,” he said.

Those serving on the CPRB “will help provide a unique perspective to governmental and police affairs,” said Gold. “I know that those selected will serve with only the town’s best interest in mind – in an honest, transparent, and nonpolitical way.”

Riddick and Assistant Chief Larry Terra both attended Tuesday night’s meeting, and Riddick credited Terra for doing much of the legwork in assisting the town manager and Council in establishing the CPRB.

In a statement, Riddick said, “The West Hartford Police Department is dedicated to the highest standards of professional excellence, and we take all complaints very seriously. We welcome additional civilian oversight, and I look forward to working with this group to ensure we are continuing best practices at all times.”

Their biographies, provided by the Town of West Hartford, are below.

Veronica Badiola has been a resident of West Hartford for 27 years. She was a clinician at InterConnections, LLC, a treatment center for clients with short and long-term psychiatric conditions. Prior to that position, she was a social worker at The Institute of Living for more than 10 years. Badiola has served as a volunteer for The Bridge Family Center, Hillcrest Area Neighborhood Outreach Center, and West Hartford Social Services, as well as Norfeldt School, where she provided translation as a fluent Spanish speaker and cultural consulting services.

Adrienne Billings-Smith is a local attorney and flight attendant. She earned her Juris Doctorate in 2013 and has been practicing law in Connecticut since 2014. She is a former high school and college basketball coach and college basketball player. Billings-Smith is also the founder and president of Concerned Parents of Color of West Hartford and past co-chair of the West Hartford’s Human Rights Commission. She works to make a positive and productive difference in West Hartford.

Bjorn Burke emigrated from Jamaica in 2000 and attended the University of Bridgeport where he received his degree in finance. Throughout his career, he has had employment in the nonprofit, municipal and corporate sectors and presently is the assistant director of Business and Finance at the Newtown Board of Education. In his role in banking, he is often tasked with conducting due diligence on investors and investment schemes. His research includes determining if investors are involved in money laundering, terrorist financing or violating the Patriot Act. Burke has volunteered as a college mentor, soccer coach and fundraiser. He is a member of the West Hartford African American Social and Cultural Organization.

Nabin Chettri, a native of Himalayan Kingdom of Nepal, moved to West Hartford in 2004 with his wife and two children and is part of a rapidly growing Nepalese community in town. Nabin was an Advisory Board Member for the Nepalese Association of Connecticut. He is an active member of the Lions Club and helps to organize their work in support of Veterans.  He works at Connecticut Distributors Inc. as a sales representative. Working with many businesses has given him the opportunity to meet people from all walks of life. Chettri earned his bachelor’s degree from North Bengal University, India, in 1988 in economics and history.

Alberto Cortes, a long-time West Hartford resident, retired from the State of Connecticut Department of Corrections after more than 20 years of service as a corrections officer. During that time, he serve as an union steward for Local #387 and spent six years serving in the Connecticut Army National Guard. Since retiring, he remains active with his church council, as well as volunteering with the West Hartford Commission on Veterans Affairs, Greater Hartford Autism Speaks, Hartford Marathon Foundation, and several other organizations.

Robin Kallor, a founding member of Rose Kallor, LLP, has been a labor and employment lawyer since 1997, specializing in mediation, litigation, counseling and training in both private and public sectors. Kallor gives advice and litigates on issues relating to race, color, religion, national origin, age, sex, disability discrimination, defamation, and other work-related tort claims and human resources issues. She earned her Juris Doctor degree from Hofstra University in 1997. She was named 2020 Lawyer of the Year, Labor-Management in Hartford by Best Lawyers in America.

Olinda Morales is a Latina attorney with extensive experience with interpreting federal and state confidentiality and privacy laws as well as employment law, immigration and tax law, and multicultural health. She presently works in the legal office of the Connecticut Department of Public Health and for the past 20 years she has also operated her private practice, the Law Office of Olinda Morales. Morales has been an alternate on the Town’s Zoning Board of Appeals since 2019. She earned her Juris Doctor degree from the University of Connecticut, School of Law in May 2000.

Kathleen Costello Hindman is a Children’s Services Consultant with the State of Connecticut Department of Children and Families and is an adjunct professor at Goodwin College. She holds a Master of Social Work in Policy Practice from the University of Connecticut. Hindman has lived in West Hartford for 25 years. She is trained in restorative justice practices through the Office of Policy and Management Juvenile Justice Advisory Committee’s program, “Effective School Interactions with Students and Police.”

Gabriela Downey has been a resident of West Hartford for 25 years and is a 2014 Conard High School graduate. She earned her Bachelor of Science in Business Administration degree from the University of Hartford in 2020 and is a 2019 recipient of the West Hartford Police Department’s Citizens Award. In her role as Associate Contracts Administrator with Collins Aerospace, Downey ensures that terms and conditions as well as compliance are met.

Matthew Horowitz is a partner with Wolf, Horowitz & Etlinger PC, specializing in fidelity and surety claims and litigation since 1990. He has previously worked as a staff attorney for the American Civil Liberties Union in Houston, Texas. Horowitz taught Civil Procedure at University of Connecticut School of Law. He managed the Civil Law Clinic at Western New England School of Law where he was an Associate Professor of Law and taught Criminal Law, Criminal Procedure and Lawyering Skills. He has been involved in litigation regarding law enforcement crowd control practices in both Connecticut and Houston.