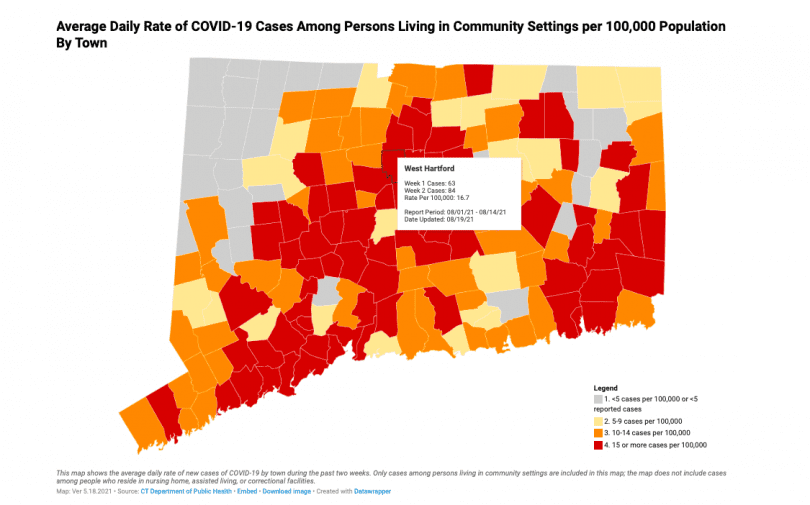 West Hartford has reached the ‘red alert’ level of COVID-19 transmission, and Mayor Shari Cantor and Town Manager Matt Hart said Friday that as of noon, masks will be required in all indoor spaces in town other than residential dwellings. 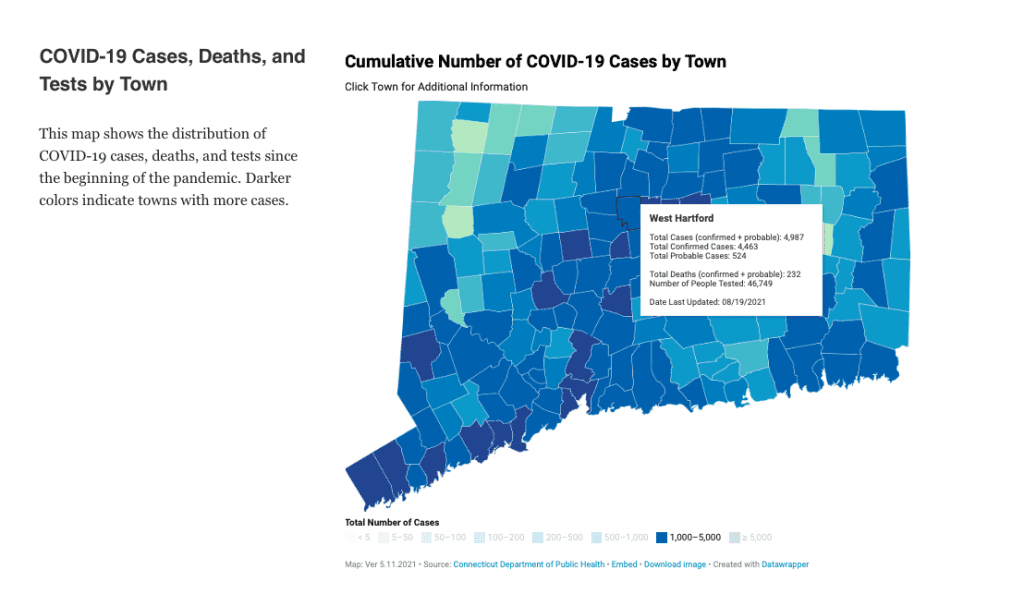 West Hartford officials said last week that they were prepared to issue a universal indoor mask mandate if and when the town reached the “red alert” level for COVID-19 transmission, and Friday at noon Town Manager Matt Hart’s Executive Order 2021-1, imposing that mandate for all individuals, regardless of vaccination status, will take effect.

The municipal mask mandate will apply to all indoor spaces, other than residential dwellings.

According to data released by the state Thursday, West Hartford is one of 73 municipalities in the “red zone,” which applies to any community with an average daily number of cases per 100,000, over a 14-day period, in excess of 15. For the most recent 14-day period that was the subject of Thursday’s metrics released by the state, Aug. 1-14, West Hartford’s case rate was 16.7, up from 13.6 a week ago.

On Thursday, another 13 positive cases among West Hartford residents were reported, with the total since the pandemic began now at 4,987.

Even though West Hartford has one of the highest vaccination rates in the state – with 77.96% of the overall population having received at least one dose of a COVID-19 shot as of Thursday, Aug. 19, the highly-contagious Delta variant has resulted in increased transmission and officials are taking additional measures to slow transmission and protect the most vulnerable.

West Hartford’s universal indoor mask mandate, the text of which is included as a PDF below, will take effect at noon on Friday, Aug. 20, and will remain in effect until further notice.

Hart said the decision to issue the mask mandate was made after consulting with public health and safety officials. He and Cantor had hoped a universal indoor mask mandate would be implemented on a statewide level, and have been pressing state officials for that to happen, but since that has not yet happened they felt this move was warranted.

The Capital Region Council of Governments (CRCOG), representing 38 area towns, on Thursday also asked the state to issue a mask mandate. East Hartford Mayor Marcia Leclerc, who is the chair of CRCOG, signed the letter to Gov. Ned Lamont on behalf of the member municipalities, following a conference call held earlier in the day.

On Aug. 5, Gov. Lamont issued Executive Order No. 13A, giving municipalities the authority and option to impose local mask mandates.

“Our approach has been, and continues to be, education first, enforcement second. We have reached out to our community over the past few weeks to alert them of the possibility of a local indoor mask mandate,” Hart said. “We will continue to take proactive steps to make sure that our businesses, restaurants, places of worship, schools, grocery stores, and long-term care facilities are aware of this new requirement.”

“We all want to keep our communities safe while keeping schools, towns, and businesses open,” Cantor said.

West Hartford’s indoor mask mandate will apply to all indoor spaces in town, other than residential dwellings, with the following exceptions:

The town has the authority to enforce the mandate, and to issue citations for those who do not comply.