Total expenditures for the fiscal year that begins on July 1, 2020, will increase by $12.2 million, 4.12%, compared to the budget the West Hartford Town Council adopted for FY2020.

As is the case in virtually every Connecticut community, property taxes provide the majority of revenues to fund the spending plan, Hart said. This budget will be 88% funded by property taxes, and the next highest contributor, intergovernmental revenue (state aid) is 8%. The town’s ECS grant, the largest piece of state aid, is projected to increase by $423,671 for FY2021 under the governor’s budget.

As he prepared the budget, Hart said he and department heads are serious about what the town is looking to achieve, while remaining cognizant of the impact on taxpayers.

“We worked really hard to prepare a responsible budget,” Hart said, one that maintains the services and programs that are important to our quality of life and West Hartford’s standing as one of the nation’s premier communities. Those programs include the town’s highly-regarded educational system, public safety – where crime is down significantly from 2018 and first responders average arrival time is 5 minutes and 30 seconds – and the offering of a broad array of community services.

How will it impact me?

The proposed mill rate, a uniform rate for real/personal property and motor vehicles, is 43.30, an increase of 1.50 mills from FY2020 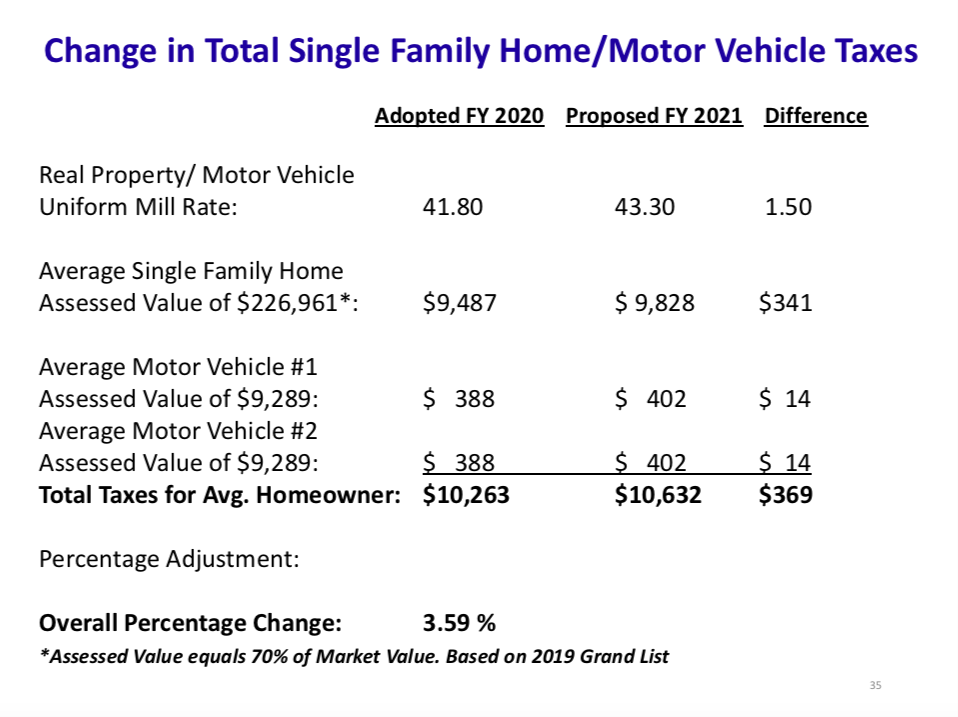 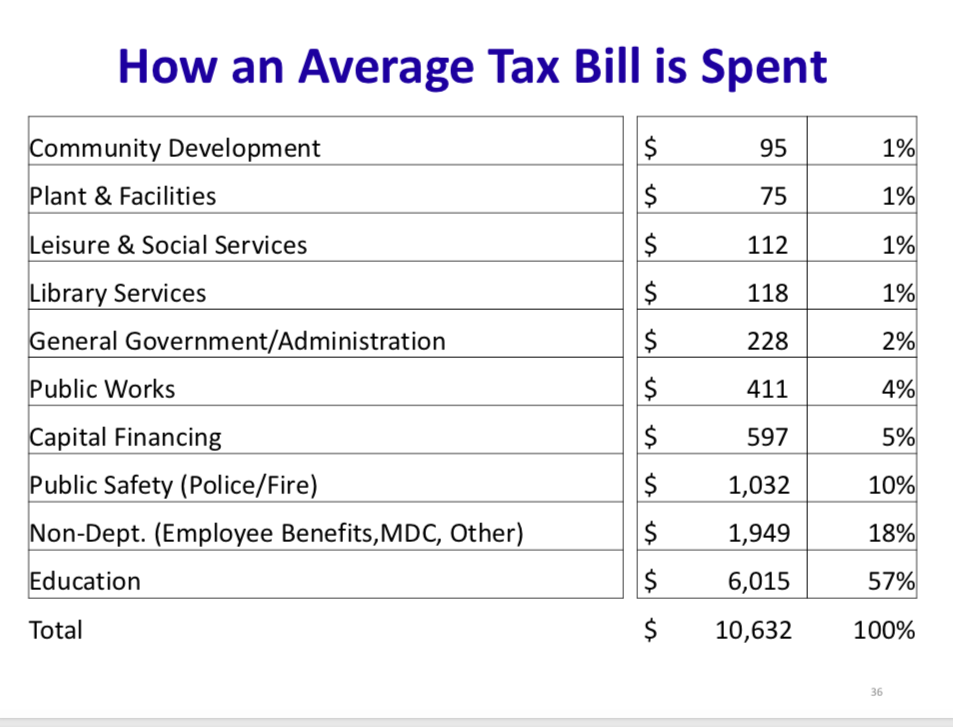 What were the town manager’s goals for this budget?

The proposed budget was structured to absorb significant cost increases “in a responsible manner without driving tax costs too high,” Hart said. MDC ad valorem, insurance, overtime for public safety that has been underfunded, and recycling are estimated to have significant increases for FY2021.

The budget was also structured to maintain the town’s strong position of fiscal management, retaining the fund balance at 9.1%, and supporting the multi-year goal of lowering the pension discount rate, in this case from 7.125% to the more prudent level of 6.99%, and funding OPEB.

Other key objectives are making “strategic investments in our infrastructure” through the Capital Improvement Plan, including investments in school security, roads, bridges, stormwater management, and in well parks and other recreational facilities, Hart said.

How is the budget allocated, and where are the increases? 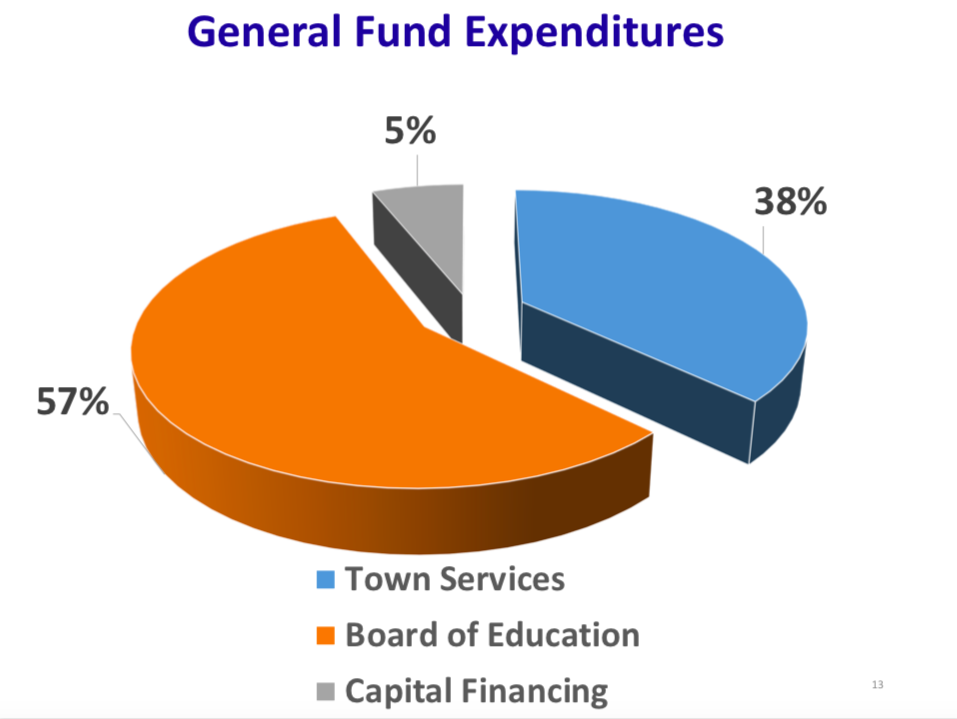 The 4.12 increase in the spending plan is spread among town services, education funding, and capital financing.

Of the town services portion of the budget, salaries make up 38%, fringe benefits and insurance are 39%, and operating expenses are 23%. 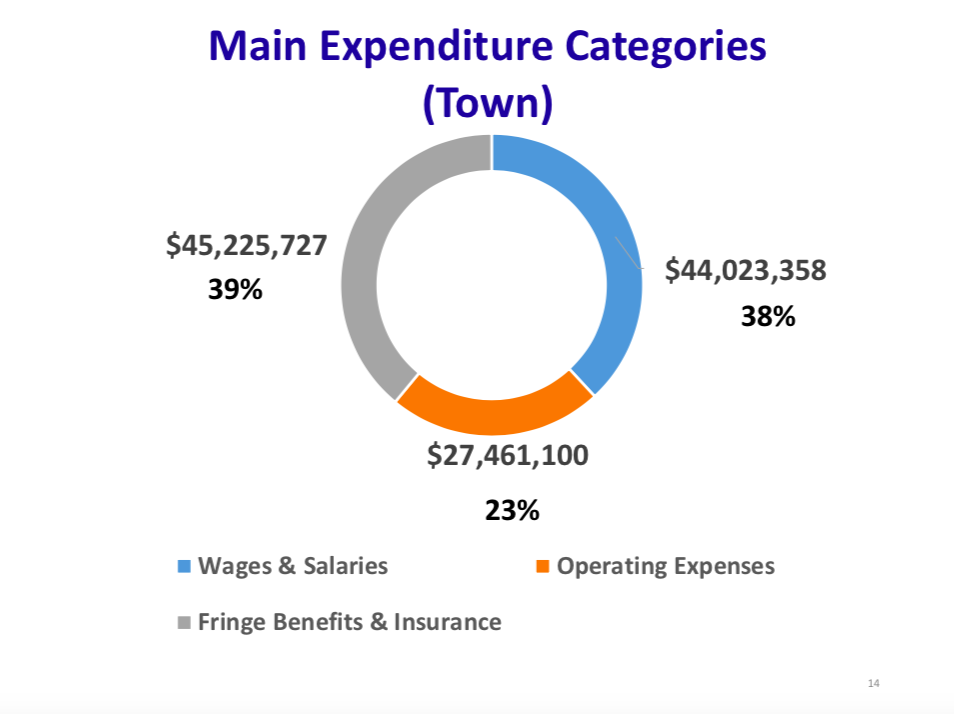 Approximately 10% of the FY2021 spending is allocated to public safety (police and fire), and 4% is spent on Public Works. Other departments added together comprise about 6%, and non-departmental expenses – like the MDC ad valorem charge – total 18%.

Funding for education is approximately 57% of the town’s budget, and the proposed budget submitted last week by Superintendent of Schools Tom Moore to the Board of Education would increase spending by 3.48% ($5,872,839).

Pre-K through grade 12 educational costs are the majority of the budget costs in most Connecticut towns, Hart said. West Hartford has been consistently at about 57% in recent years, but in smaller towns it can be a much higher percentage.

Negotiated salaries as well as the costs related to special education, including transportation and tuition, are some of the primary costs driving the proposed education budget increase.

While the Town Council can change the overall appropriation to the Board of Education, it cannot make line item changes.

The cost of capital financing (5% of the budget) will decrease by $14,351 (0.08%) under the town manager’s proposed budget due to allocation of the previous year’s surplus, Hart said.

Capital financing – the cost for the what has been bonded – is primarily longterm debt and Capital Non-Recurring Expenditures (CNRE). 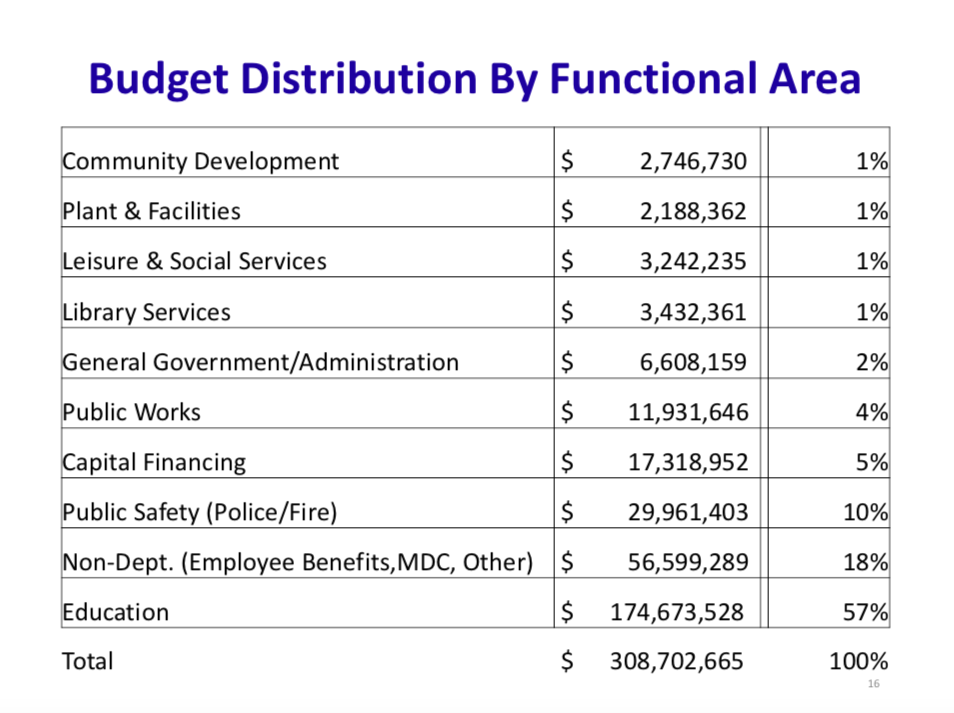 What, specifically, are the budget drivers impacting town services, and what is being done to mitigate costs?

The cost of sanitary sewer service – which is the town’s ad valorem contribution to the Metropolitan District Commission (MDC) – is consistently one of the major drivers of increased overall spending. The required contribution this year has increased by $793,200, or 6.93%. The payment to MDC has risen about 70% over an eight-year period, Hart said.

West Hartford has been and continues to be a leader in urging the MDC to convert from ad valorem to user fee basis, which would take the cost out of the town’s budget. User fees are the “norm nationwide” for sanitary sewer charges, and the most environmentally responsible way of charging, Hart said. The town is supporting the MDC’s integrated plan, which is pending approval of the Department of Energy and Environmental Protection, Hart said. That plan will decrease reliance on ad valorem charges to finance the MDC’s capital expenses.

“The pension fund is underfunded, the Council is well aware of that, and for many years we have been working to increase the funding levels,” Hart said. Adjusting the discount rate is an important consideration as well, and if the discount rate (6.99%) can meet asset projections, the funding ratio will increase from 41% to 51% over the next 10 years, according to Hart’s projections.

“The year-to-year increase over the coming years should decrease if we can meet those targets,” he said. For newer employees, the hybrid pension plan will also help, and the Council will once again be exploring alternate financing options through the Finance Committee, which were discussed last year.

The town’s health and risk management programs – which includes employee and retiree health insurance, self-insurance reserves, heart and hypertension, and workers’ compensation programs – are budgeted to increase by $1,424,673 in FY2021. Within that category, health insurance costs are increasing by 7%, which is a reasonable number in the market, Hart said, adding that the program will continue to be bid out for lower cost options, and plan design changes will be explored as well to mitigate the increase.

Wages and salaries will see an increase of $1,656,190, Hart said, but that number is inflated by about $300,000 because the contract with the firefighters has now been settled and a wage adjustment had been previously classified in as a contingency cost.

In addition, the budget for FY2021 contemplates moving the cost of a police officer from the Parking Lot Fund to the General Fund. At one point there were two officers paid through the Parking Lot Fund, but the other was reallocated several years ago, Hart said.

A request to increase the budget for fire department overtime is based on historical trends, Hart said, and the budget also contemplates an expense for temporary payroll due to the new minimum wage law.

As more senior employees in the public safety sector retire, they are eligible to cash out certain forms of leave he said, in the aggregate creating a significant impact. Due to contractual changes, that won’t happen as newer hires reach retirement, but currently it is a cost driver.

Hart has also bumped up the budget for fire department overtime by about $340,000. That item has been kept flat for the past few years for budgeting purposes but has been consistently exceeded by a large percentage.

Another major budget driver this year is solid waste and recycling.

“Not so long ago recycling was a revenue … the markets have changed significantly and now it’s an expenditure,” Hart said, “a significant new expenditure that we need to absorb.”

The FY2020 budget estimated a small amount of revenue from recycling, but instead cost the town an estimated $87,500.

Due to continued market changes, the cost of disposing of recyclable materials is estimated to cost an additional $670,000 in FY2021, and an increase of $72,500 for municipal solid waste fees and $50,929 for yard waste disposal is also included in the Public Works budget.

The town has hired a part-time recycling coordinator, who will expand efforts to educate residents on better methods of recycling and diversion. In addition, Hart said, a proposed capital project will expand the town’s transfer station to better manage waste and provide the opportunity to divert items that should not be thrown into the trash, and discussions will continue regarding better strategies for trash removal service.

Salaries, always a budget driver, will increase by roughly $3.37 million for FY2021 largely based on collective bargaining agreements. Employee benefits will increase by $590,000, and transportation and all other town expenses are budgeted to increase by $1.91 million.

Along with the General Fund budget, the Town Council will also vote on a two-year Capital Improvement Program totaling $45,626,000. That number does not include grants, which will provide some of the financing for projects such as replacement of the Fern Street Bridget ($4.2 million estimated total cost).

Hart is also proposing increasing the road resurfacing program from the current seven miles per year to 10 miles per year, at a cost of $3,o25,000 over two years.

Storm water management is estimated to add $3,508,000 to the CIP over the next two years.

Also included in the CIP are school security upgrades which will be completed this year, at a cost of $3,700,000, some of which will be paid for through grants.

Improvements to the police shooting range, which is a regional resource, will cost $750,000, and upgrades to the town’s animal shelter, which is decades-old and doesn’t meet standards, are estimated to cost $750,000.

Modernization of the recycling center as a full-scale transfer station is included in the CIP at a cost of $1,370,000.

“This is probably the single most important thing the Town Council does in any given year,” Hart said regarding the budget, and staff takes the process very seriously as well.

“We’ve structured this budget so we think it’s a highly responsible budget,” he said, and one that is doesn’t rely on one-time methods.

The budget “maintains the programs, services, and infrastructure that help make west Hartford great, make us the community that we are,” he said. It supports the community services that are important to residents, and incorporates financial management combined with quality services and strategic investment to help the promote quality of life and provide return on investment for residents and taxpayers.

There is plenty of opportunity to review the proposal carefully over the next few weeks. “We know that we have more work to do when we review this,” Hart said.

Town Council committees will be discussing and reviewing specific portions of the budget through April 20, with key workshops on March 18 and 31.

The public will have the opportunity to comment on the budget at public hearings scheduled for Tuesday, March 24 at 2 p.m. and Tuesday, March 31 at 6 p.m., both at Town Hall.

The detailed Board of Education budget is available on the West Hartford Public Schools website. Suggestions can be sent to [email protected].

The Town Council is scheduled to adopt the budget on Monday, April 23. That meeting will begin at 7:30 p.m.

All budget documents are now available for review on the town’s website.

The “Budget in Brief” can be found as a PDF below.