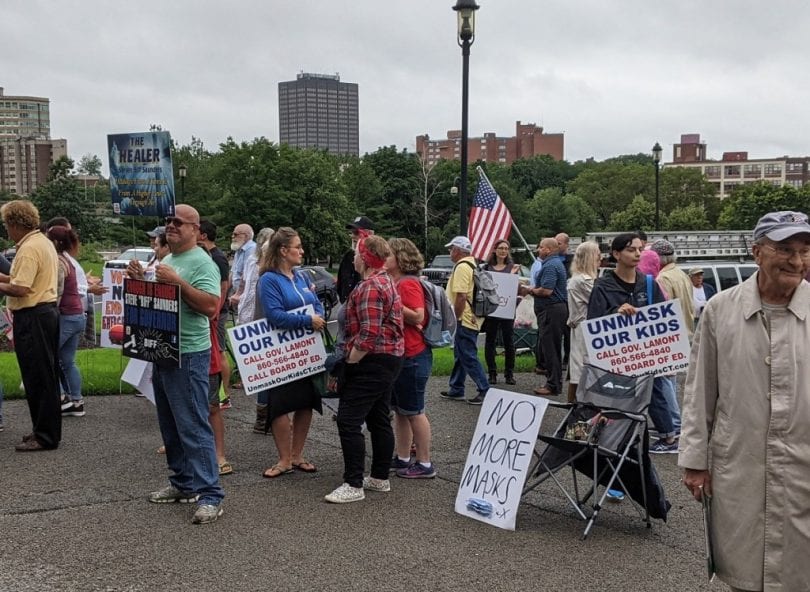 With the spread of the Delta variant, COVID-19 cases are on the rise in Connecticut and the seven-day statewide positivity rate is now above 1%. There were six new cases over the weekend in West Hartford according to state data.

Parents and school administrators in Connecticut are waiting on the state to signal whether it will require students who are not vaccinated against the coronavirus to wear masks in classrooms during the coming school year.

Earlier this month, the U.S. Centers for Disease Control released guidelines calling for children who are not fully vaccinated to continue wearing masks while indoors. But the state, which last year required masks in schools, has yet to announce whether it will mandate the precaution or simply recommend it, leaving the rules up to local boards of education.

“My instinct is, right now, the CDC’s been pretty clear: if you haven’t been vaccinated, wear a mask,” Gov. Ned Lamont said Thursday. “And the question is, do we do that with guidance?”

Lamont, whose pandemic-related emergency powers were extended by the legislature through Sept. 30, has the ability to set the requirement, at least for the first weeks of the coming school year. The governor has maintained an executive order allowing the Departments of Education and Early Childhood Development to set COVID safety rules for schools and daycare settings. He said he expected to make the call in the next two weeks.

The decision will have the most impact in classrooms for younger students, who are not eligible for any vaccine. Currently, vaccines have been authorized for children only as young as 12 years old. According to the state, 49% of residents between 12 and 15 years old had been vaccinated as of Thursday. Vaccination rates were higher among older students. About 66% of people ages 16 and 17 had received at least one shot.

Among the overall population, 75.68% of West Hartford residents have received at least one dose.

“Obviously now, the issue is what do we do with K through 8?” Lamont said. “There may be some vaccines available to that age group but probably not for a few months and we’ve got to figure out what we do with that cohort.”

The governor’s school mask order was controversial among some parents even at the height of the pandemic before much of the state’s population was vaccinated. In May, a judge upheld the constitutionality of the requirement after a group of parents challenged it in court.

Meanwhile, a private group on Facebook called Unmask Our Kids CT has grown to include thousands of members and opponents of the school mask order were among a group of protesters who gathered last week at the state Capitol building to demand the legislature oppose Lamont’s request extending his emergency authority.

The legislature went on to approve the extension later in the week, but several Republican lawmakers spoke in opposition of the mask order during the rally.

“My daughter had a headache for a year. I went to the doctor. The doctor said ‘It is the mask.’ Literally on my drive here, I called my superintendent and said ‘She will not have a mask on. It is not fair,’” Rep. Lezlye Zupkus, R-Bethany, said. “They should be learning instead of wearing masks.”

“I myself have a two-and-a-half year old at home. He’s not putting a mask on,” Case said. “His mom is a teacher in a school that does not have an air filtration system. It gets hot in there for those elementary kids. Enough is enough.”

However, some public health organizations say it is too soon to drop masks in classrooms. This week, the American Academy of Pediatrics recommended that all students, teachers, and staff wear masks even if they have been vaccinated.

On Monday, Dr. Anthony Santella, COVID-19 coordinator for the University of New Haven, said the safest course for Connecticut is to avoid relaxing all the restrictions schools became accustomed to last year.

“I know people have very strong feelings about their individual rights and freedoms and what that means inside schools,” Santella said. “But schools, whether it’s K-12 or higher education, have a responsibility to ensure that everyone – students, staff, faculty – have a safe academic experience. For me that means, assuming they can’t get vaccinated, they should wear a mask.”

Discussing the mask requirement last week, the governor said it was too soon to make the call because a lot could change before schools begin to convene next month.

“I could [decide] today, but look how much has changed in the last two weeks. I didn’t even know much about a Delta variant three weeks ago,” Lamont said. “My instinct is, if I see this Delta variant continue where it is, accelerating, I think if you aren’t vaccinated wear a mask a little bit longer. But that could change.”