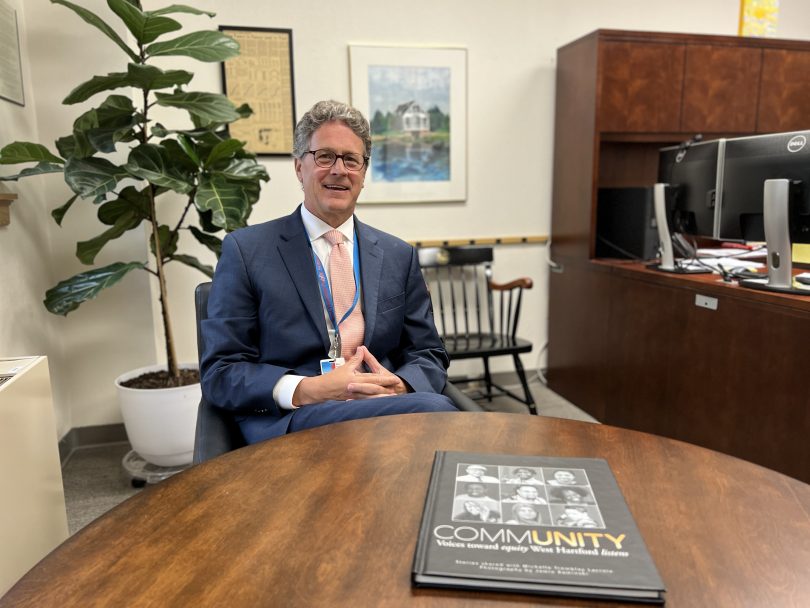 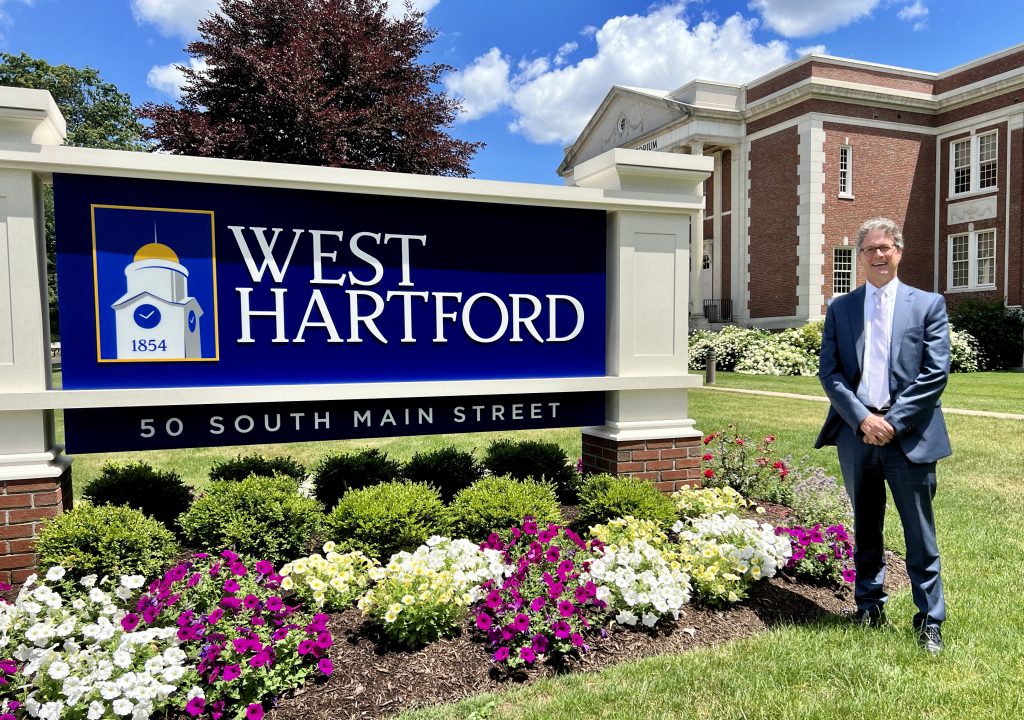 Following a unanimous vote by the Town Council Tuesday night, the “acting” title was removed and Rick Ledwith’s appointment as West Hartford town manager was made official.

Ledwith, 56, has worked for the Town of West Hartford for more than 20 years, 15 of those as executive director of Human Resources, and he has served as acting town manager since February 2022 when Matt Hart, who had served in the role since 2017, left to become executive director of the Capital Region Council of Governments.

When Hart shared his plans to resign in late 2021 with Mayor Shari Cantor and town leadership, Ledwith was approached to fill in as acting town manager.

“They asked me right before the holidays and I was excited, and honored, and humbled. Still am,” Ledwith told We-Ha.com.

His existing familiarity with and understanding of the town’s operations enabled Ledwith to hit the ground running and to face challenges that arose immediately – including presenting the town’s budget during a revaluation year. “I’m happy to say that thanks to the hard work of staff and the Council, we adopted a budget with a lower mill rate,” Ledwith said.

Since he became acting town manager in February there have been other significant actions as well, Ledwith said. He thanked Town Planner Todd Dumais for his hard work in crafting the Transit-Oriented Development ordinance, which was adopted by the Town Council on June 14 and will be transformative for the Elmwood and New Park Avenue corridors.

Also since February, the North Main Street Road Diet was made permanent after a trial period, and an ordinance regulating the sale and manufacture of adult-use cannabis was adopted. He noted that at the June 28 Town Council meeting, a COVID-19 recovery program for small businesses was scheduled to be finalized.

“The Council feels strongly that we have a top candidate,” Cantor said of the appointment of Ledwith. She told We-Ha.com that Ledwith also has the confidence of staff, community leaders, and external stakeholders.

“At this point in the evolution of the town it’s important for someone to be able to hit the ground running,” Cantor said. Ledwith is clearly dedicated to and loves the town, and is a “confident and thoughtful leader” who has institutional knowledge, relationships, and the confidence of staff and others, and his performance during the trial period has already been impressive, she said.

Cantor said she is so grateful that Ledwith has agreed to take on this responsibility. “We require a lot, and the Town of West Hartford expects a lot,” she said Tuesday night just before the vote. “We’ve had an incredible history of wonderful town managers,” who have taken great care of the town and have always responded professionally and promptly to the needs of residents, and have cooperated and collaborated on a regional basis to ensure that West Hartford sets an example for the state.

Not only is Ledwith ready, willing, and more than qualified for the position, but Cantor said it’s important to have stability in leadership as the town continues to emerge from the pandemic and is in the midst of some other changes. “We are fully aware that the Board of Education is doing a national search for a new superintendent and will be hiring someone from the outside,” Cantor said, to replace Tom Moore who will be departing on June 30. Andy Morrow has been named interim superintendent, but does not plan to apply for the permanent position.

Deputy Mayor Liam Sweeney also offered praise for Ledwith. “He loves this town and we know it, we can feel it and see it,” Sweeney said, sharing a story of how Ledwith was told about some graffiti on the former UConn campus on a weekend and covered it up himself. “That to me was an eye-opener as to what we were getting with Rick,” Sweeney said, and he has jumped right in on every issue.

Ledwith is well known in the community, and also has a kindness about him, Sweeney said, and knows the right way to communicate with residents. “I enthusiastically support Rick being the permanent town manager … and I appreciate his signing up. This is not an easy job.”

Minority Leader Mary Fay joined the meeting for the discussion of Ledwith’s appointment by phone, and said she wished she was there in person to “give my two cents worth and approval.”

Fay said Ledwith “did a stellar job” responding to questions and jumping into the presentation and finalization of a complicated budget. “I think it’s a win-win for the town. I couldn’t be more enthusiastic and thrilled.”

Councilor Carol Blanks said she appreciates Ledwith remaining mindful of the continued impact of the pandemic, and how well he already knows the town. “The institutional knowledge is key … and the fact that you are a townie if you will, you have so much knowledge,” she said. I’m really thrilled that you’re here and in this role.”

“What I’ve experienced is that you’re accessible, responsive and transparent,” Councilor Al Cortes said. He praised Ledwith for wanting to continue after his “sneak peek” as acting town manager now that he knows the responsibilities.

He’s not perfect, however, Cortes joked, noting that he’s loyal to “a certain baseball team.”

Council member Mark Zydanowicz, who previously served on the Board of Education, has known Ledwith for a long time, and said when he heard the position would be vacant, Ledwith was the first person he thought of. “I knew you would be a perfect fit,” he said, adding that he could not be happier with the choice. He said he also appreciates that he has no idea of Ledwith’s political affiliation, if any.

“The continuity that you bring to this job, there was no transition,” Zydanowicz said. “I couldn’t be happier for this town. I know it’s in good hands.”

Councilor Leon Davidoff said when he learned that Ledwith was under consideration for the role, “I did speak with the people who reported to you and each one was more excited than the next.” He praised Ledwith’s ability to build relationships.

“It’s a challenge to be town manager … you’ve done everything with 100% commitment, you’ve done it with honestly, transparency, and the best interests of the community in your heart,” Davidoff said.

There are significant decisions and policy updates facing West Hartford on the near horizon, Ledwith said, and he’s excited to take them on. Included are the finalization of the town’s Affordable Housing Plan, strategic planning for the new Elmwood Community Center which will begin this week with a meeting of the advisory committee, and a new waste management solution for the Brixton Street facility.

“That’s what makes it so exciting, working with the directors, the staff, Town Council,” Ledwith said.

Even before Hart became town manager, work had been underway to advocate for a train station in West Hartford, and Ledwith said he looks forward to working with Hart in his new role at CRCOG, the Department of Transportation, and the legislative delegation to make that a reality. He said conversations are continuing and hopes to have more information in the next few months.

“Development happening literally in every corner of town,” will certainly be on the front burner for Ledwith in his new role, and panhandling is also an issue that will be a focus, he said.

A new diversity, equity, and inclusion position will be filled soon, and Ledwith said he is looking forward to implementing the Town Council’s vision and continuing to make West Hartford more welcoming.

Ledwith grew up in Wethersfield, and earned a degree in finance from Central Connecticut State University. He first lived in West Hartford briefly after college and earned an MS in human resources management from Boston University. Before joining the Town West Hartford in 2001 as a human resources specialist, Ledwith worked for The Hartford, Aetna, a consulting firm in Boston, and Advo in Windsor.

“I’ve worked very closely with both the Board of Education and the town for the past 15 years,” Ledwith said, and has had a hand in hiring all of the directors. His institutional knowledge also extends to the education budget and gives him a unique perspective for this role, and a deep understanding of the challenges faced by the schools, public safety, and the other diverse services the town offers.

“I am very honored and humbled by your comments and certainly your trust to have me serve as your town manager,” Ledwith said following the vote.  “You talk about my love for the community but the love that all of you have … is inspiring and energizing.”

The commitment of the town’s employees is part of the culture, he added. “We are in excellent hands with all of us doing what we have to do, day in and day out, to make West Hartford the premier community it is today and always striving to make it better.”

He said he’s already enjoying working with the town’s very engaged residents, and “helping our team solve problems for our community.”

He and his wife, Tara, have lived in West Hartford for the past 25 years and have three adult children – Emily (24), Shannon (22), and Jack (21), all of whom attended and graduated from West Hartford Public Schools.

Ledwith will earn an annual salary of $172,500, and details of his employment contract will be available on the town website.