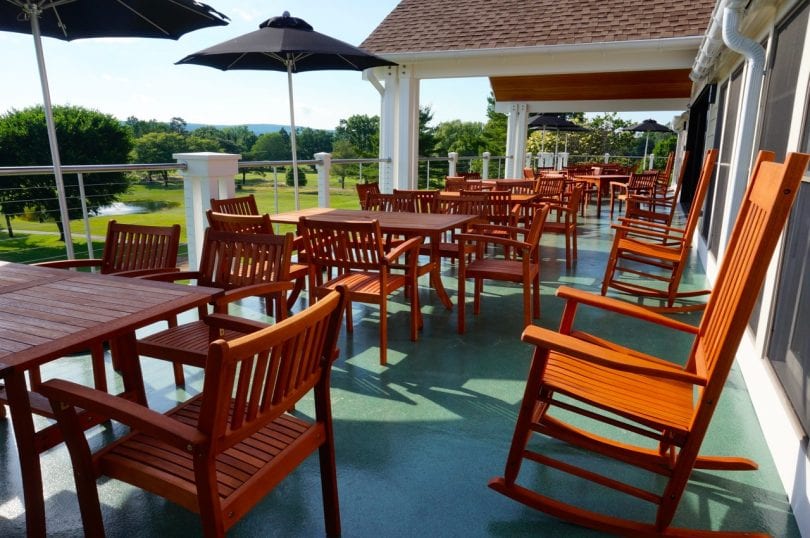 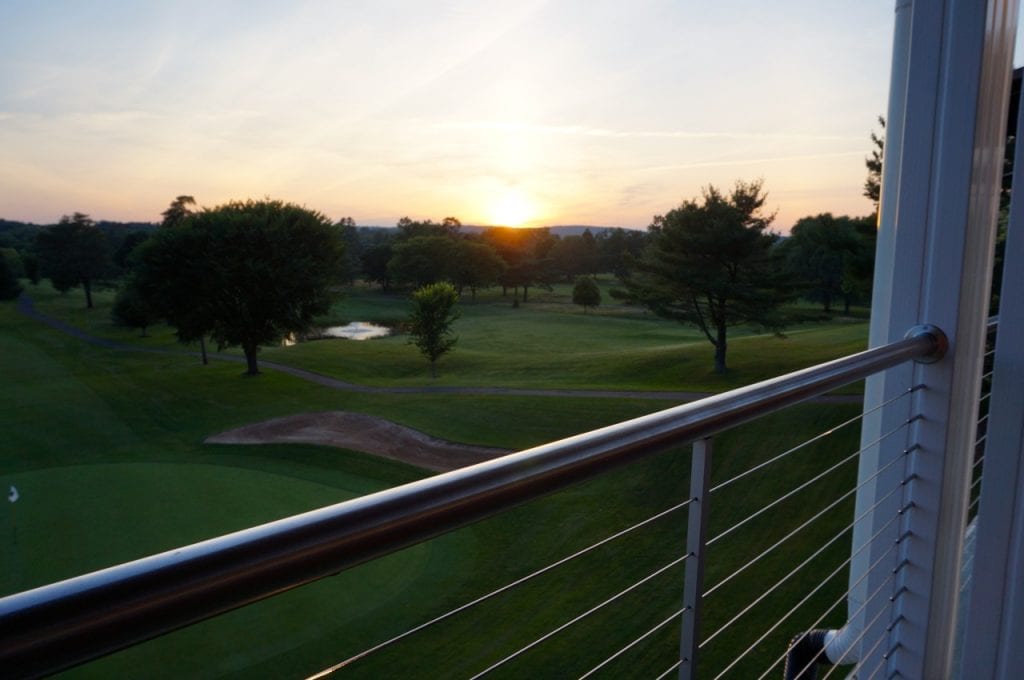 Diners would be drawn to Rockledge Grille for the menu’s scratch-made American fare alone, but when combined with what has to be the best view in West Hartford, the town’s newest restaurant, which had a soft opening on Saturday, is an experience that should not be missed.

Chip Kohn and his partner in Beachland Group, Jeff Kivlin, have taken over the operation of the restaurant at Rockledge Golf Club, West Hartford’s town-owned golf course, and have completely gutted and transformed the 1967 structure into an airy, modern space bathed in natural light, affording spectacular vistas of the golf course and stunning sunsets from the west-facing deck.

“It’s been such a big project,” said Kohn. “There’s nothing we didn’t touch.” The restaurant was previously called Angelo’s on Main, and operated by Angelo Chirico who ran it from January 2002 until he retired at the end of December 2017.

The town actually did the structural renovations of the deck, for safety and code reasons, and the project included making the deck longer and 5 feet wider. The deck can now accommodate 72 people – at all new teak tables and chairs as well as several inviting rockers.

The restaurant had a soft opening on Saturday, and with the summer season ahead the deck is sure to be a popular destination, but those dining inside are also treated to a year-round view of the golf course, which is beautiful in every season, thanks to expansive new windows. A series of sliding doors along the back wall of the dining area creates a seamless transition between inside and outside areas.

The green carpeting is gone, replaced with lux vinyl plank floors. The hallway leading from the front door to the bar has also been lightened up.

“We wanted to let in as much sunlight as possible and take advantage of the views,” said Kivlin.

The dining room has always had a vaulted ceiling and exposed beams, as did the bar area, but the beams had been painted olive and the ceiling in the dining room was popcorn.

“We noticed the ends [of the beams] in the attic,” Kohn said, and his team spent countless hours stripping the paint to expose their natural wood. The bar’s cedar ceiling has been closely-matched in the dining room, as well as in the covered section of the deck.

The tables and bars are topped with rough-cut walnut for a look that is clean modern without being stark, featuring warm wood tones and white walls. Ginny Kemp of West Hartford-based Blue Twig provided the artwork – black and white images of famous golfers and other golf-related scenes.

In the bar area, a gas fireplace with a soaring stone surround adds to the homey atmosphere. 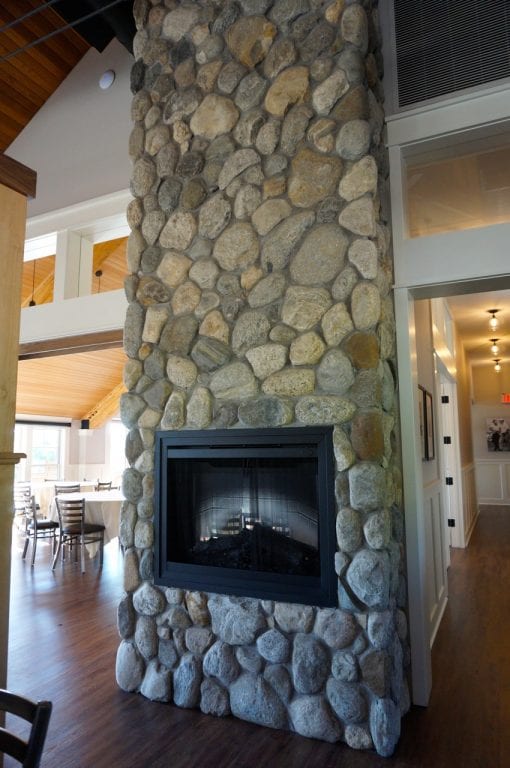 A gas fireplace has been added to the bar area. Rockledge Grille. Photo credit: Ronni Newton

A floating wall – crafted of dark walnut and topped with a transom to allow light through – can be closed to separate the bar and dining room to better accommodate private parties. A second walnut wall will soon be installed in the dining room, allowing it to be broken up into two separate room, one 40-seat space and another 60-seat space, allowing for even greater flexibility.

A second bar has been installed in the dining room, where those renting the space for events can take advantage of the available three custom tap lines.

Kohn and Kivlin are West Hartford natives and longtime friends – and have hired a chef who is also a native of West Hartford and was interested in returning to town.

Chef Jonathan Cohen was most recently executive chef at a restaurant in Ellington, and prior to that ran the restaurant at Weekapaug Golf Club in Westerly, RI, from 2002-2015, where his seasonally-influenced menu received high praise and helped dramatically increase the club’s membership. In addition to his culinary expertise, Cohen’s background includes meticulously overseeing the club’s event operation, which he will also do at Rockledge.

The menu at Rockledge Grille is similar to Beachland Tavern, but slightly more elevated, Kohn said. It can be best described as “comfortable, seasonal cuisine,” he said, with an approachable price point. “The kind of place where you can be equally at home in jeans or a cocktail dress and heels.”

Kohn and Kivlin hosted taste testings as they finalized the menu, and for starters some of the early favorites are the fresh burrata with local heirloom tomatoes, mixed greens, balsamic glaze, and extra-virgin olive oil, ($11); whipped ricotta with honey and truffle oil served with crostini ($9); spicy orange shrimp with chilled vegetable salad and sesame orange glaze ($14); and beef tenderloin carpaccio with olive oil, capers, arugula, truffle oil, and crostini ($14).

The menu includes several salad selections, and Kohn said that the apple and grape salad with mixed greens candied cashews, crumbled goat cheese and raspberry vinaigrette ($12) has been a hit during the tastings.

Sandwich offerings include a ham/brie/apple melt served on sourdough with honey mustard ($14), and a crispy chicken BLT with sriracha aoili on a bulky road ($14).

An immediately popular entree is the pan-seared Stonington “Bomster” scalllops with roasted corn polenta and local vegetables in a blueberry balsamic glaze ($25). Entrees ($16-$28) include several pastas, as well as salmon and chicken dishes, and filet mignon. Prices quoted are all from the dinner menu.

Burgers are being added as well, Kohn said, with a build-your-own option.

The dessert menu is also being finalized, and will include seasonal specials.

A specialty cocktail menu will likely include some signature drinks, Kohn said. A rotating selection of local craft beers, as well as standard favorites, are also available.

One major positive to dining at Rockledge Grille: ample free parking. Once the golf course closes for the day, there’s even more parking available in the lot, and on-street parking on South Main is also an option.

Beachland Group began the renovation project in late February, and Kohn and Kivlin had plenty of praise for the local crew that did the work, accomplishing such an extensive transformation in a relatively short timeframe. Jeff Webster of West Hartford was the general contractor, Jeff Jahnke was the architect, and Dan Cech of Shelton-based European Remodelers did the the construction work.

In addition to Rockledge Grille, Beachland Group has also taken over operation of the snack shack and golf course’s beverage cart. The snack shack serves hot dogs, burgers, and freshly-made wraps, as well as breakfast specials. 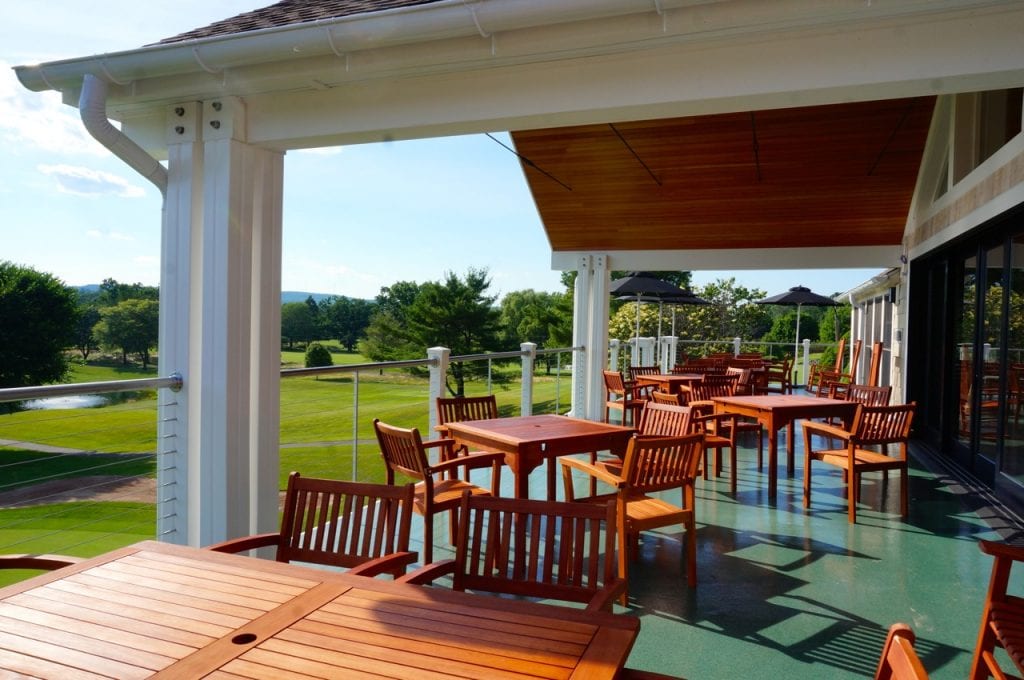 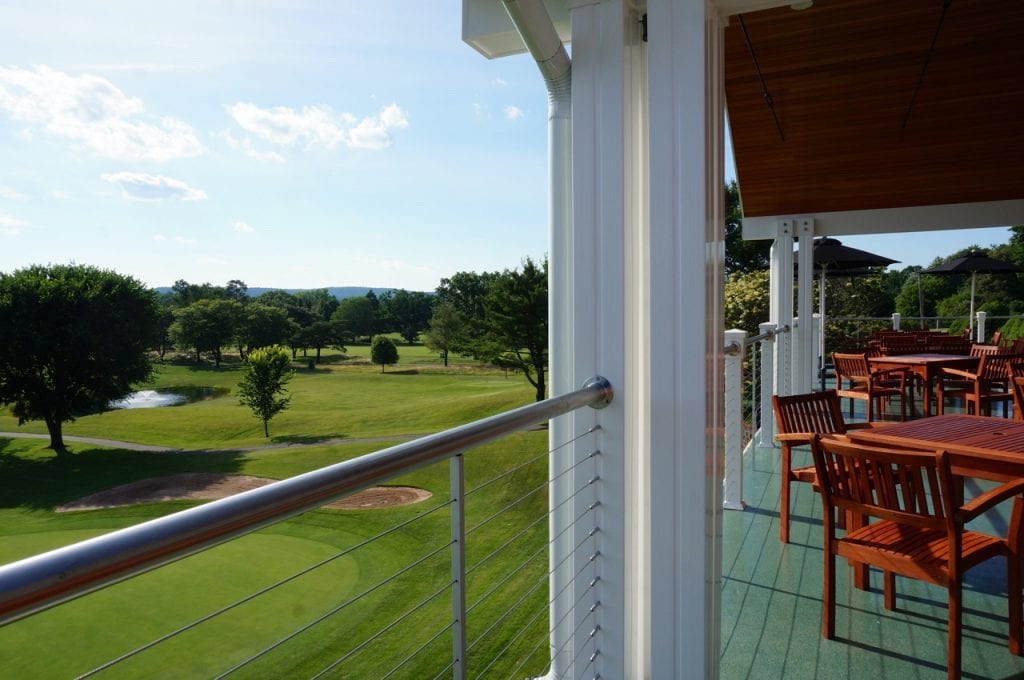 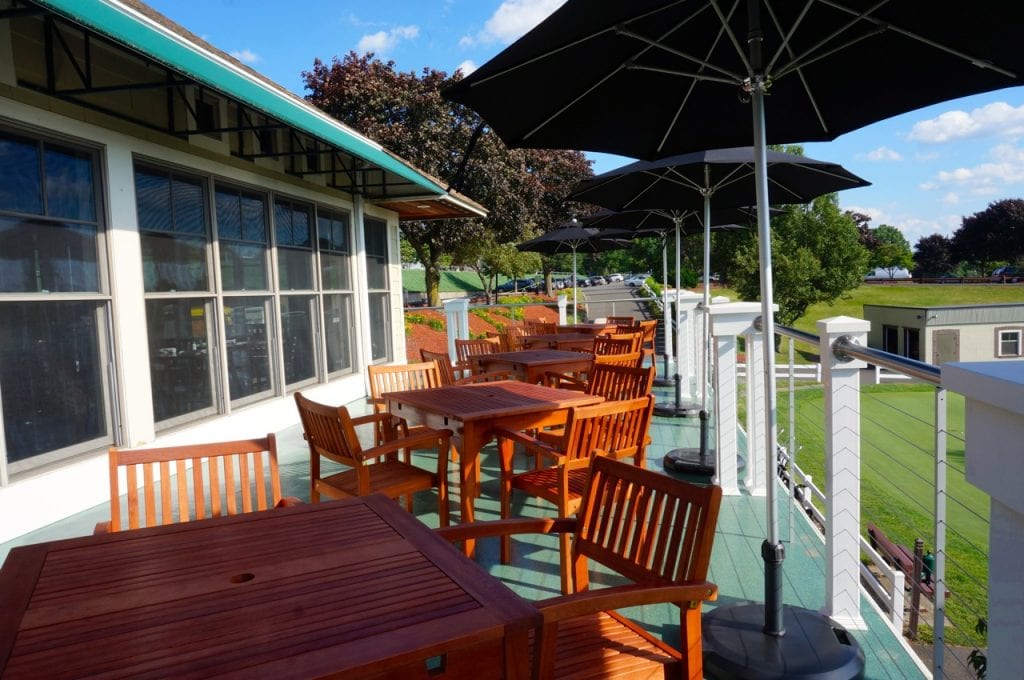 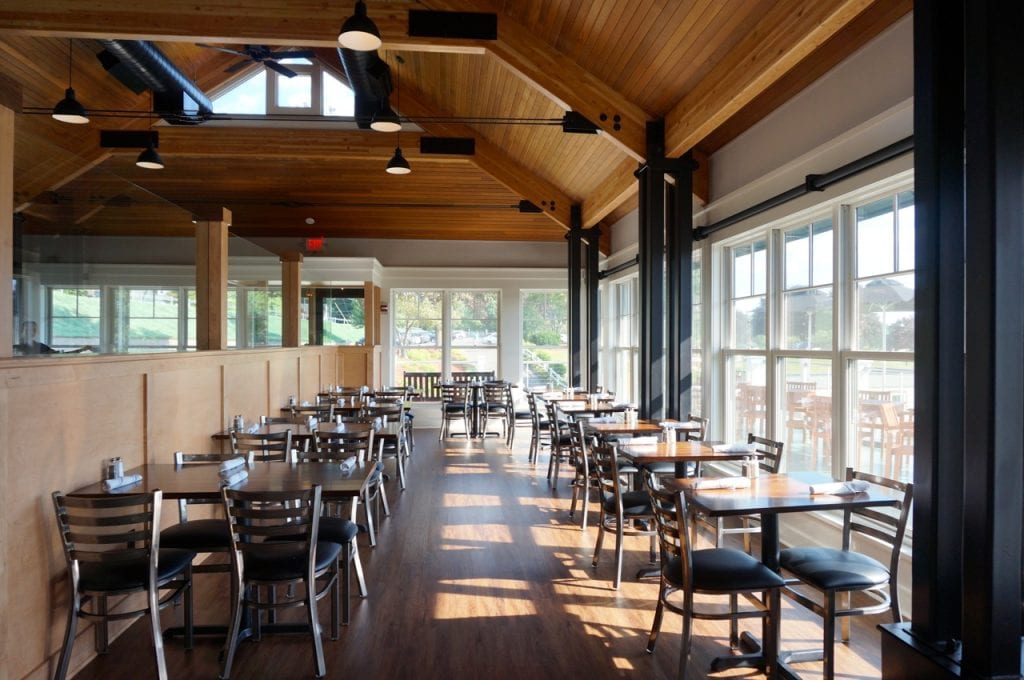 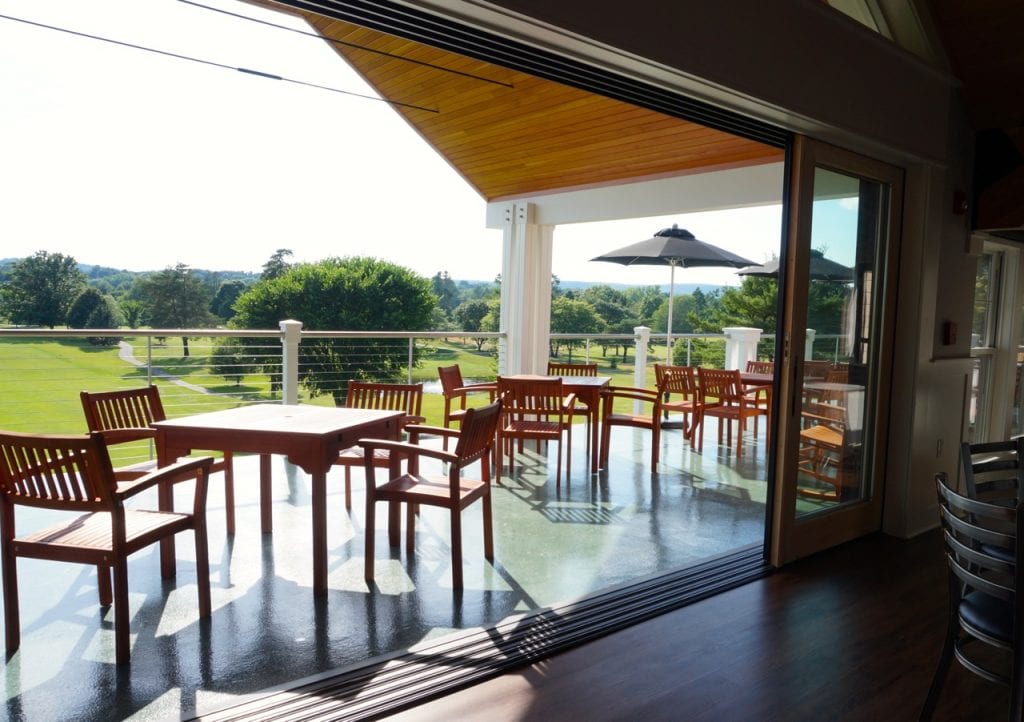 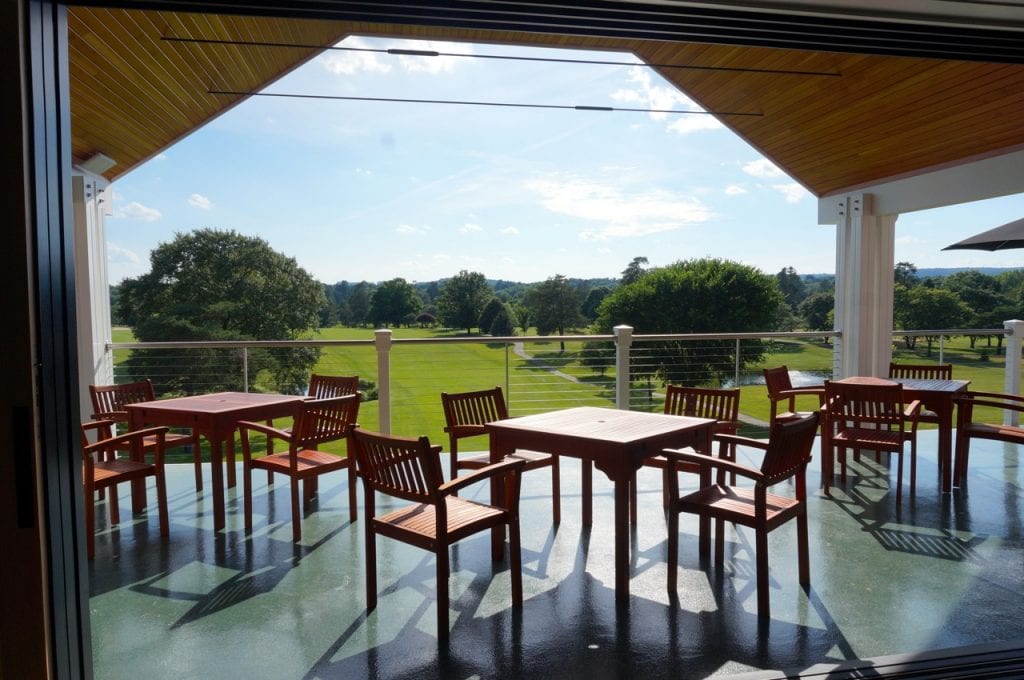 View from the dining room straight out to the deck and the golf course beyond. Rockledge Grille. Photo credit: Ronni Newton 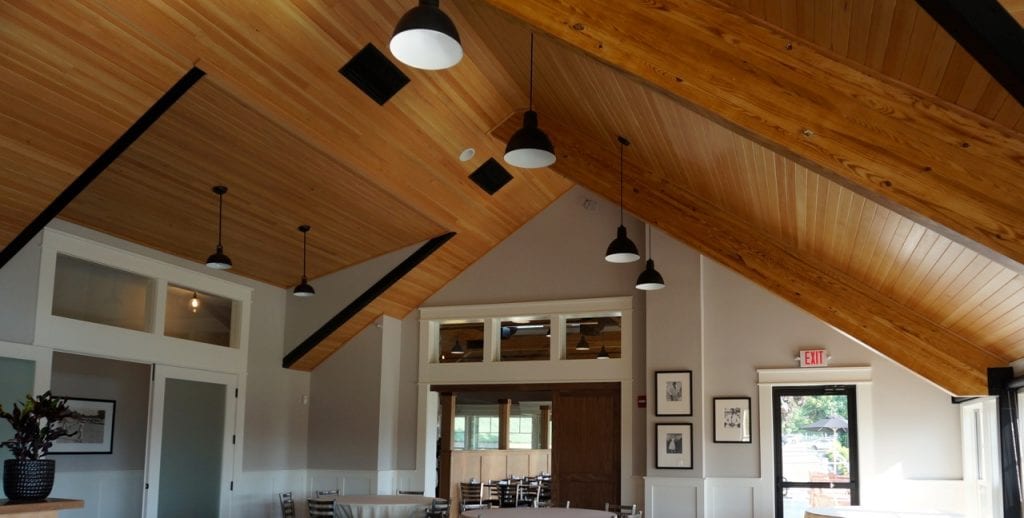 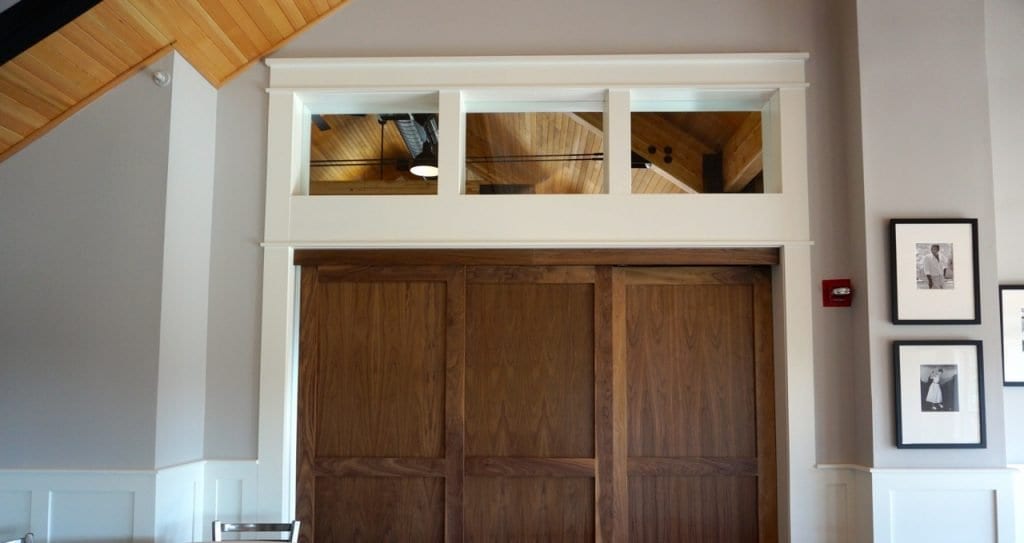 Walnut doors can close off the bar area from the dining room, allowing for separate events to be held at the same time. Rockledge Grille. Photo credit: Ronni Newton 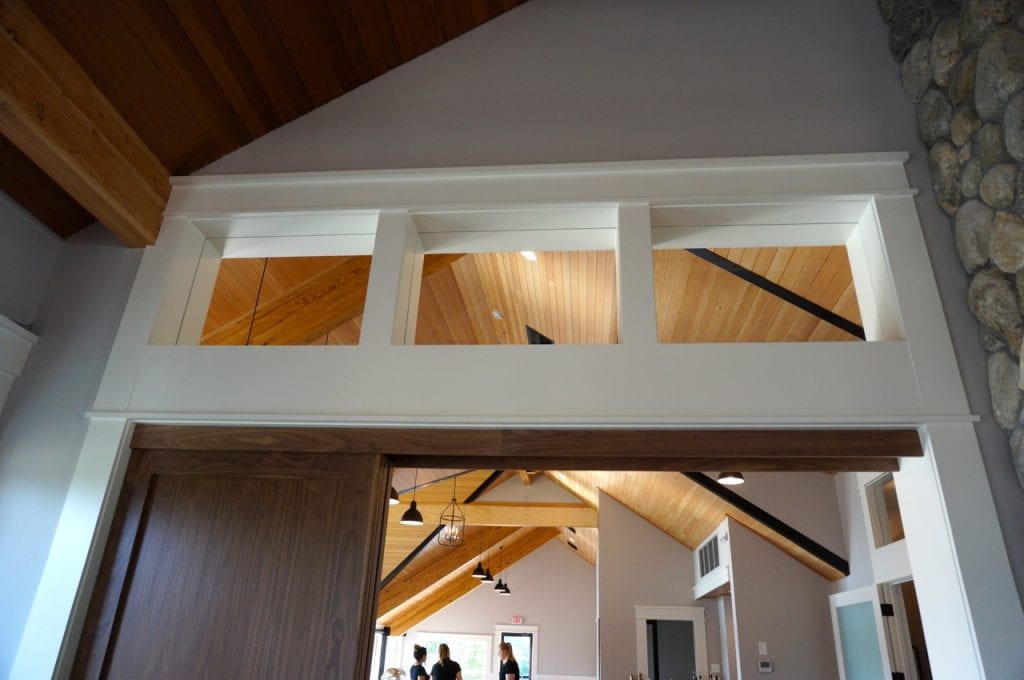 A transom above the walnut doors that can separate the bar and dining room. Rockledge Grille. Photo credit: Ronni Newton 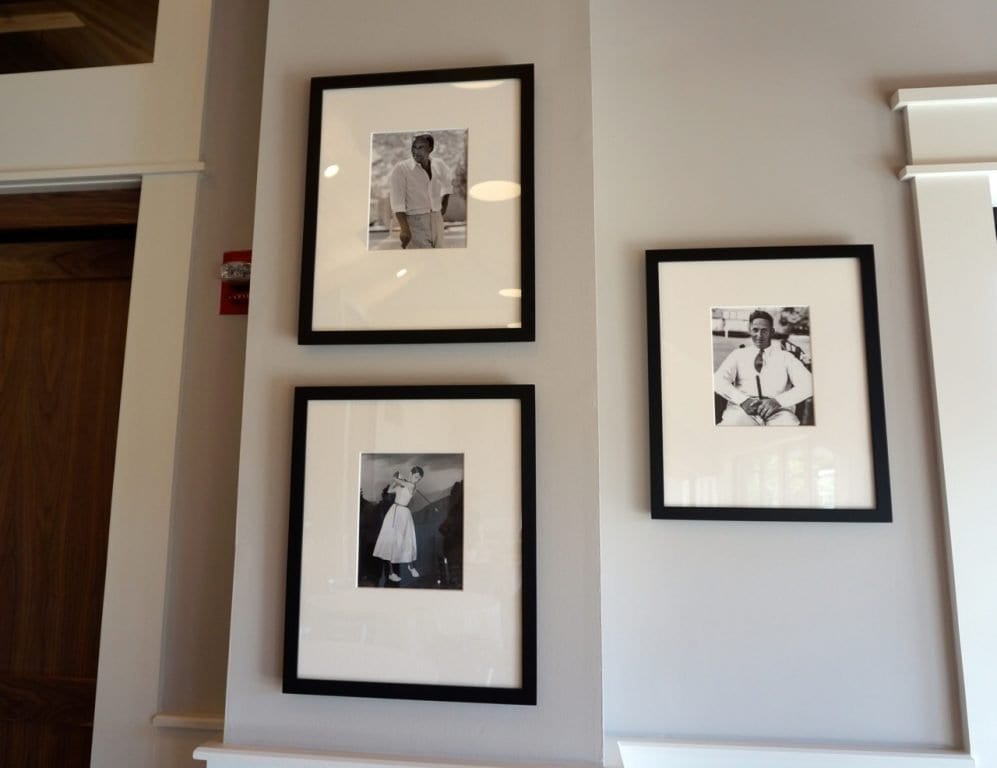 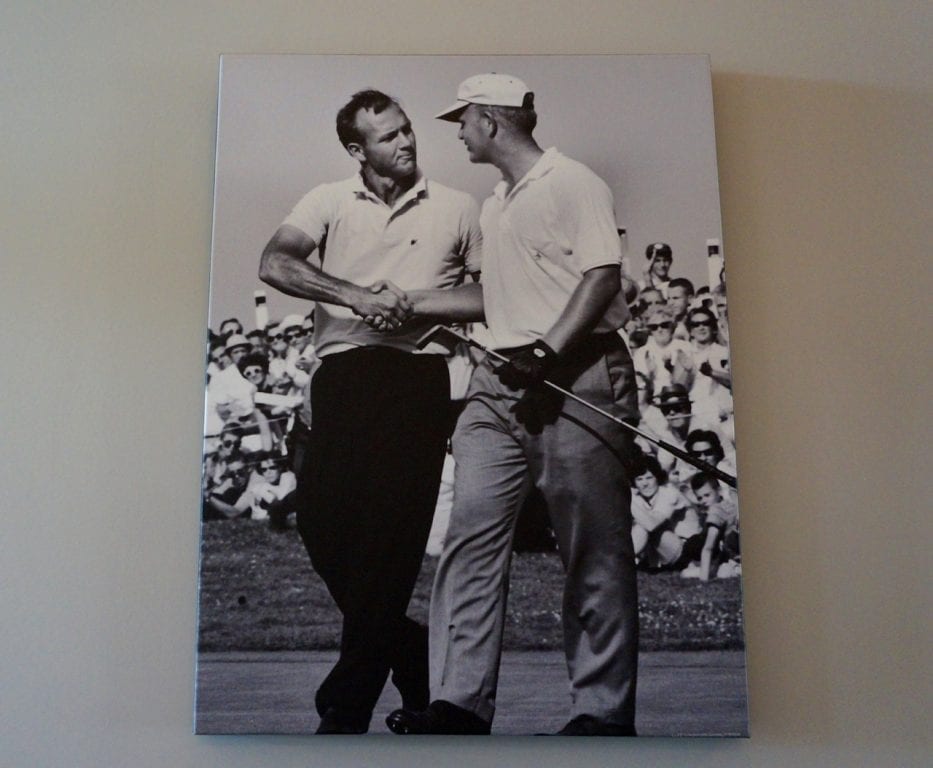 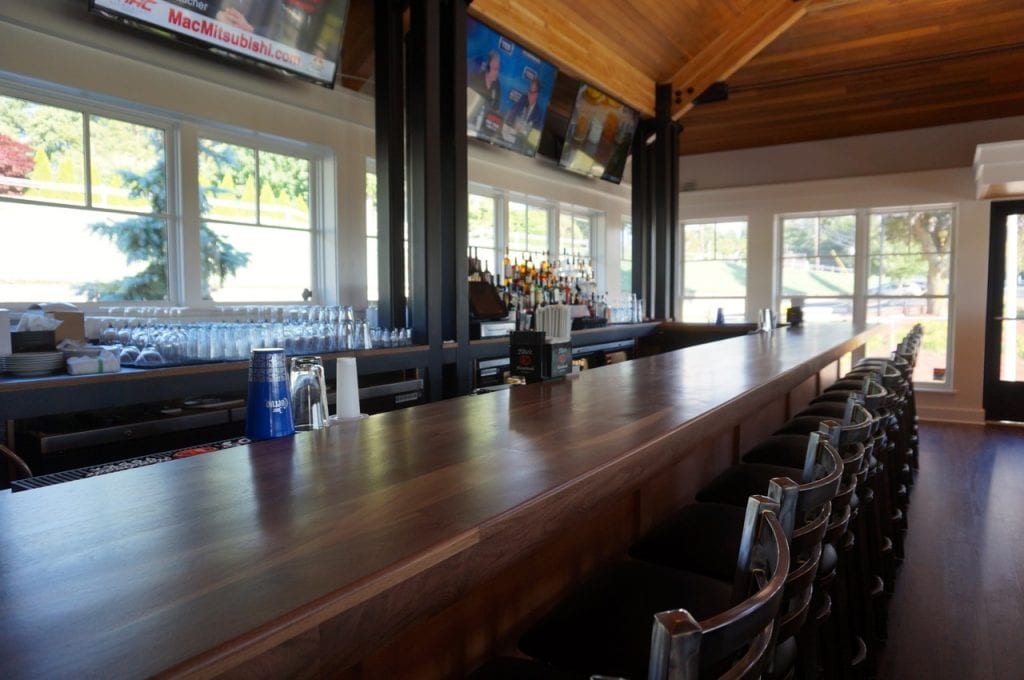 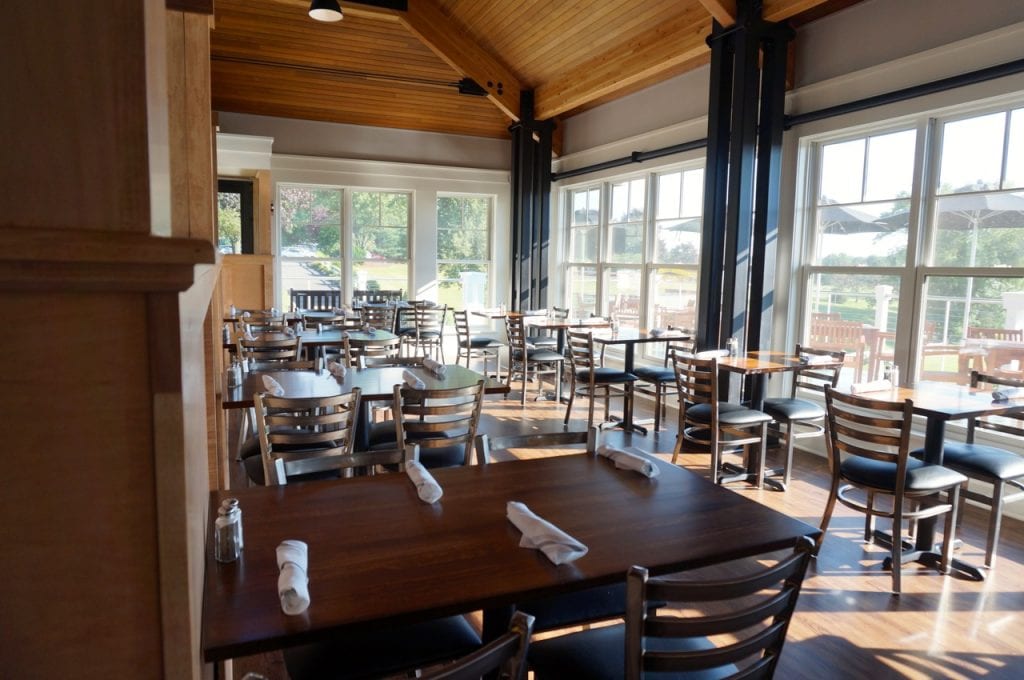 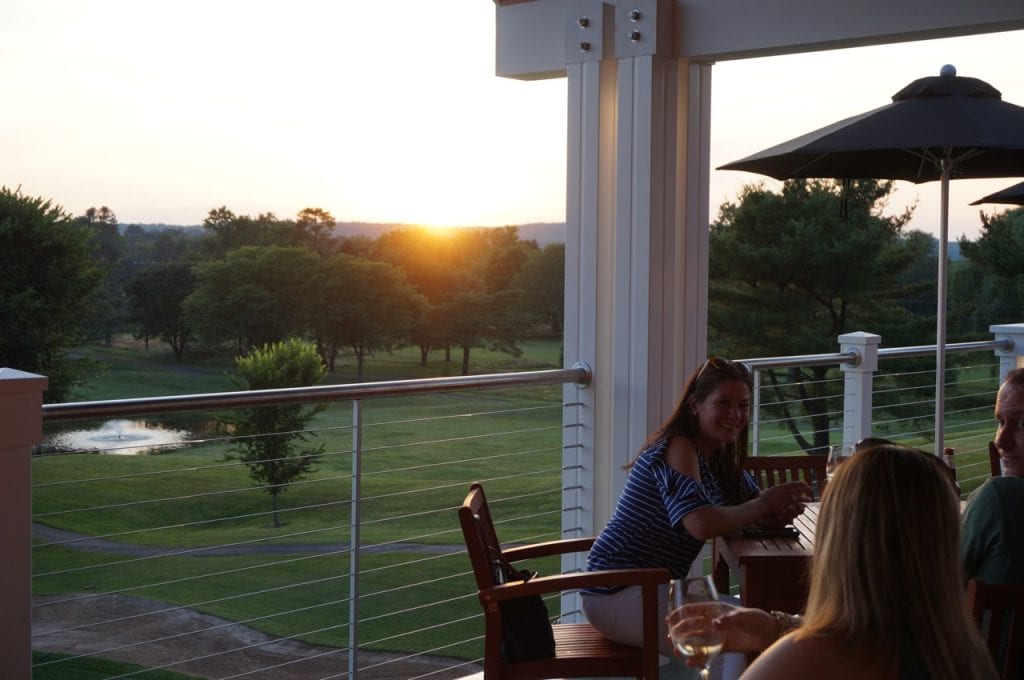 Several guests at a friends and family gathering enjoy the deck at sunset at Rockledge Grille. Photo credit: Ronni Newton 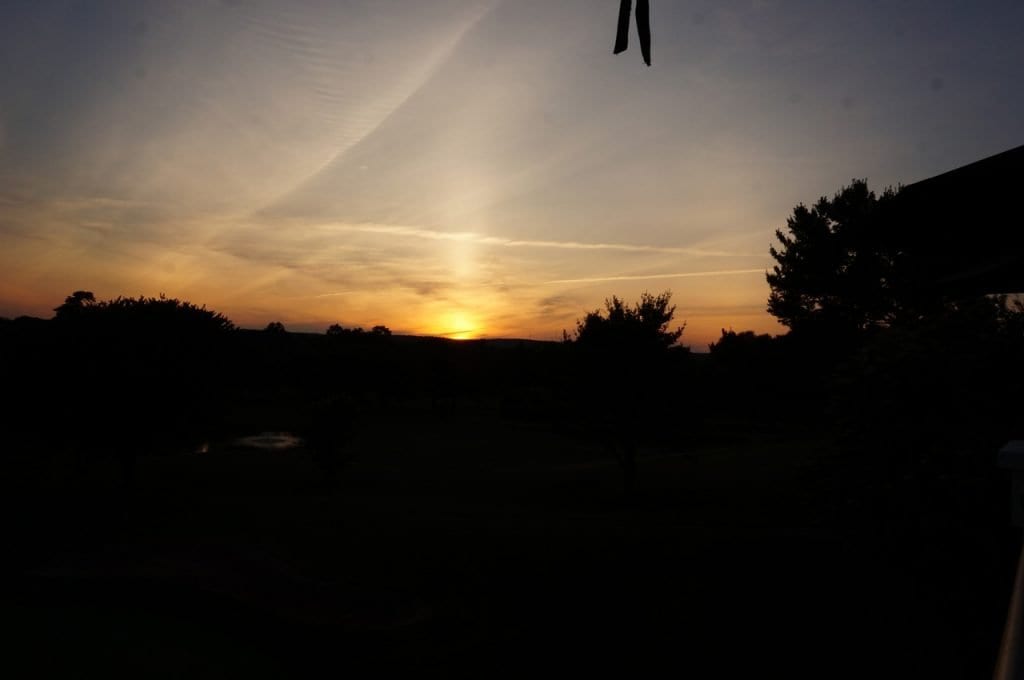