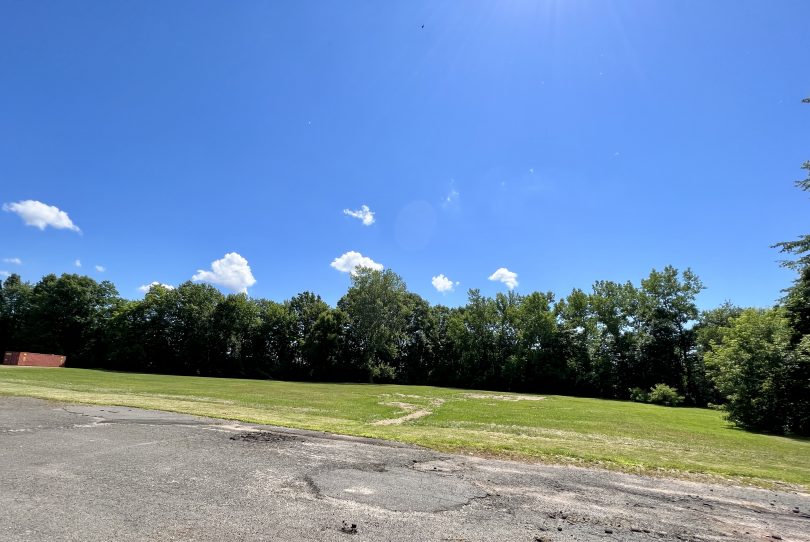 The West Hartford Dog Park Coalition has proposed use of the grassy area in the rear of 100 Mayflower Street as a dog park beginning Sept. 10, 2022. 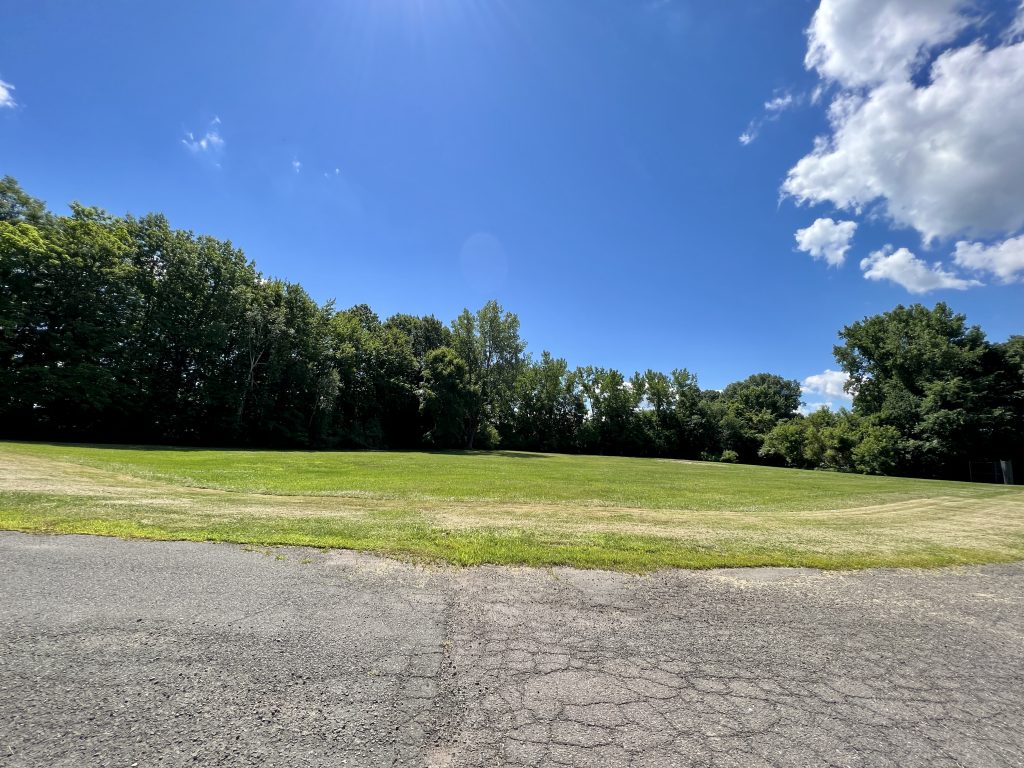 West Hartford dogs may soon have their days in a park they can call their own – at least 365 days that is.

The West Hartford Dog Park Coalition (WHDPC) has filed an application with the Town Plan and Zoning Commission, (TPZ) for a Special Use Permit. During Monday night’s TPZ meeting, a public hearing will be scheduled for Sept. 7, and if the application is approved a temporary dog park could open as early as Sept. 10, 2022, at 100 Mayflower Street.

As soon as the Town of West Hartford announced plans to purchase the former St. Brigid School property on Mayflower Street in March 2021, WHDPC Co-President David Coleman had it on his radar and got excited about the site’s possibilities.

“We’ve been working closely with the town and they’ve been quite supportive,” Coleman said. He’s hopeful that the Special Use Permit will be approved.

A dog park has been talked about as a desired amenity for West Hartford for well over a decade, and pooch plunges, held nearly every August after the town’s pools closed to human swimmers, have served as fundraisers for a future park. Another pooch plunge is coming up at Beachland Park on Aug. 22. 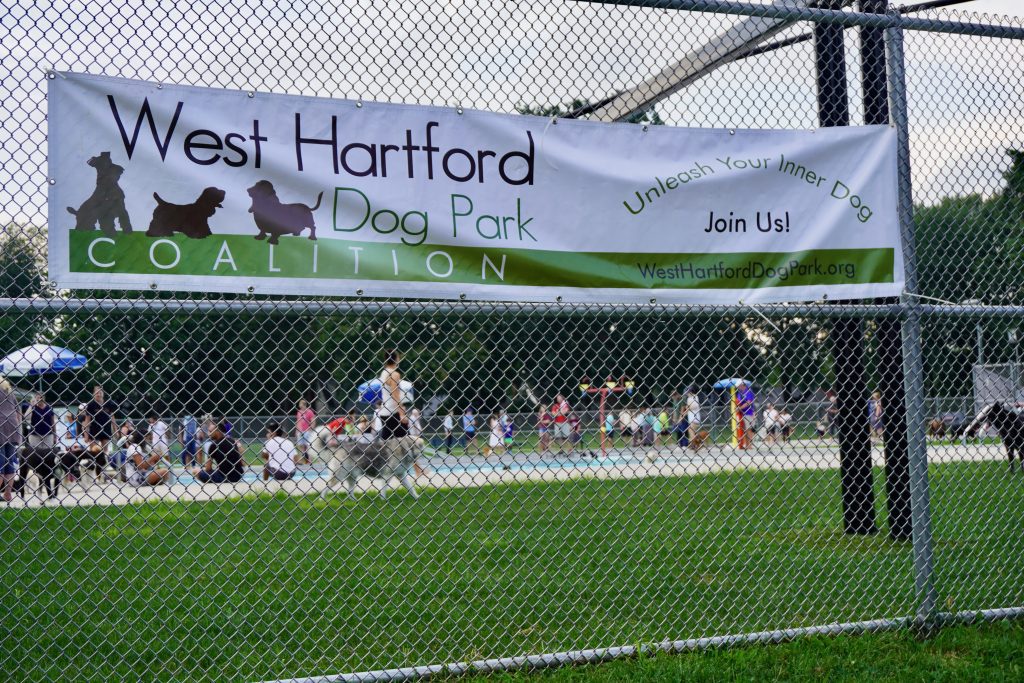 There have been pop-up dog parks, and a temporary dog park was in place at Beachland Park during the winter of 2019 into early 2020, but pooches have not otherwise had a dedicated outdoor space where they can frolic together off leash.

The town become owner of the Mayflower Street property last fall, with plans to create a new Elmwood Community Center on the site. Specific plans for a facility that can accommodate a variety of uses – including cultural center, senior center, teen center, and Faxon branch library – are still in the visioning stage.

Town Manager Rick Ledwith said that if approved by TPZ, this dog park would likely be in place longer than the temporary one at Beachland Park, so long as the field remains unused. The town has been receiving recommendations from various stakeholder groups interested in the Elmwood Community Center project and an established advisory group will be meeting later this week as the functional program development and feasibility study phase of the project continues.

In the meantime, the site has been used for various purposes, including training of first responders and members of the Community Emergency Response Team. It was also used for distribution of N95 masks last winter.

A decision will be made on whether to renovate the existing building, demolish it completely and build a completely new facility, or a combination thereof.

“It’s a great opportunity – a once in a lifetime opportunity,” Ledwith said of the overall project.

Including a permanent dog park as one of the amenities at the site, “has been mentioned, along with a lot of other things,” Ledwith said.

Coleman believes a dog park fits well with the concept of having the Elmwood Community Center and adjacent Beachland Park serve as a dedicated community hub. “This seems ideal to us, and I hope it goes through,” he said.

The entire parcel at 100 Mayflower is 8.5 acres, and the WHDPC is proposing use of an acre or less of the grassy area that is the farthest away from the existing building and is adjacent to the woods bordering Beachland Park. Because of the configuration and the curve on Mayflower Street, that area of the property isn’t very close to any houses, and is bordered by wooded areas on two sides, and the former school building and a parking area on the other sides. Plenty of parking is easily accessible and the proposal notes that the site is also ideal “because it is a spacious, unused area that has morning shade and afternoon sun,” and meets the site section criteria established by the town and WHDPC.

While there is plenty of space available, the exact size of the dog park will be determined by the “amount of fencing that can be rented, the cost, and the final layout,” according to the proposal.

It meets the site selection criteria, which include not directly abutting residences, not interfering with established programs, affecting sensitive environmental habitats, or being in close proximity to playgrounds. There also needs to be ample parking and minimal visual impact.

The WHDPC, at the town’s request, has started doing outreach to roughly 250 nearby residents. Coleman said just one response has been received thus far, and it was very supportive. A woman who doesn’t have a dog emailed to say opening a dog park there was “a sweet idea, and I wholeheartedly support you.”

Coleman noted that the application is just for a temporary park, which would have to be removed once any construction commences for the new community center. The temporary dog park would be fenced, and have a separate area for smaller dogs – all installed at the WHDPC expense. Other desired amenities such as placing wood chips on the ground to avoid muddiness would await a permanent site – which he hopes will be at the same property.

Ledwith noted that this area does drain much better than the Beachland Park field where the temporary dog park was located in 2019-2020.

Rules would be posted at the site. 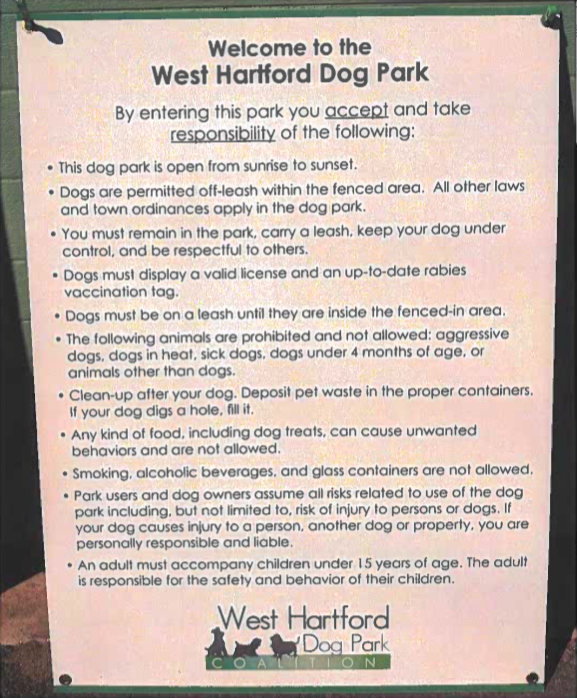 Rules that were posted at the temporary dog park at Beachland Park. Town of West Hartford website (we-ha.com file photo)

“The hope is that once the construction is done we can come back and have it become permanent,” Coleman said. “We’ve worked so long on this.”

After years of frustration and failure, the town worked with the WHDPC to develop site selection criteria.

Nearly eight years ago, in October 2014, there was excitement among dog owners when a piece of land owned by the town, adjacent to Cornerstone Pool on a small slice of Buena Vista Golf Course, appeared to be an ideal dog park location. The idea was considered over the course of several months, but the Buena Vista Property Owners Association voiced strong objections, and hundreds of people signed petitions both against and in favor of the site.

The WHDPC used some of the funds raised through pooch plunges and other efforts over the years to support the temporary dog park at Beachland Park. The biggest problem with that site, however, was that it was only open during the winter months and it got very muddy.

The Beachland Park site was set to close anyway right at the same time as COVID-19 caused the closure of many town facilities, and although there was a well-attended pooch plunge in the summer of 2021, there have not recently been any other pop-up dog parks. This year’s pooch plunge will be held after the pools close for the summer, at Beachland Park on Aug. 22, from 4-6:45 p.m. 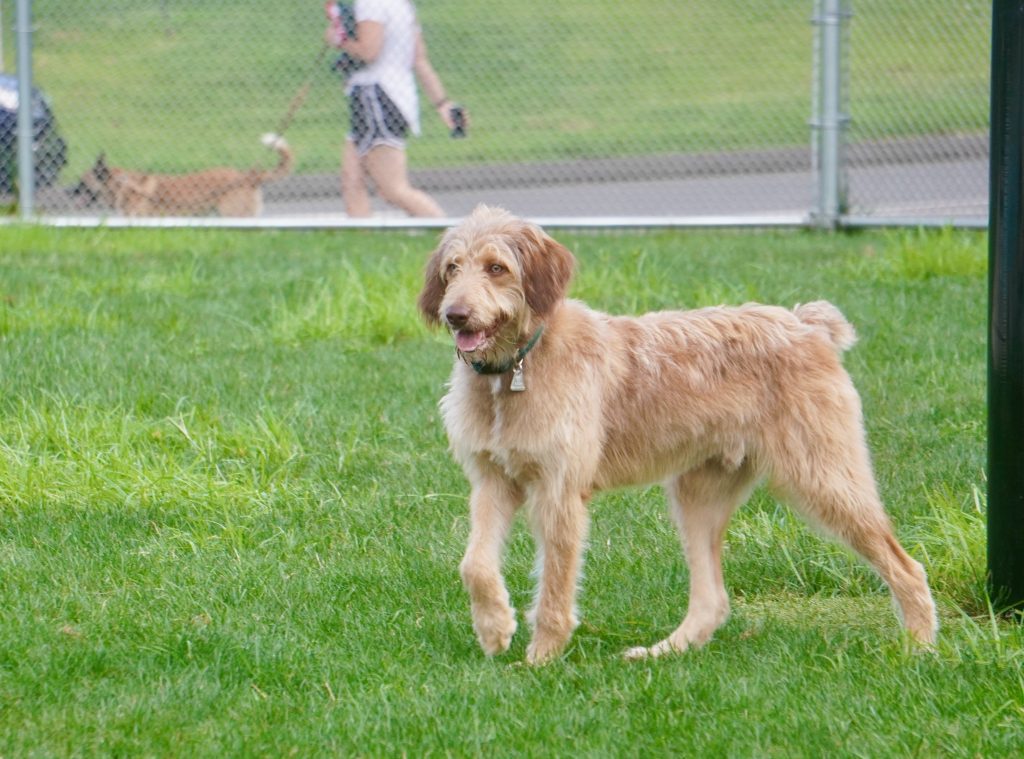 In December 2021, the WHDPC released the results of a survey it had conducted during the spring and summer of that year to gauge public support for a dog park. The WHDPC used Survey Monkey, and sent the survey to a list of residents provided by the town.

According to the results, 88% of the more than 1,300 who responded to the survey said West Hartford should have a dog park.

“More than four out of five (83%) survey respondents said that having a dog park in West Hartford would improve the town’s quality of life and sense of community,” a news release reporting the results stated. “More than one-fourth (27%) said they would likely use a West Hartford dog park several times a week, and the same percentage said they would use it once or twice weekly.”

“It’s hard to imagine ninety percent of the public agreeing on anything these days, but our survey clearly shows overwhelming support for a dog park,” Coleman said of the results. “Dog owners are tired of having to drive to Simsbury and other towns’ dog parks. We’ve been waiting for a dozen years for a dog park right here in our town. It’s time.”

He said there are currently more than 1,000 dog parks in the U.S., and more than 50 in Connecticut.

Other survey highlights noted by Coleman include: