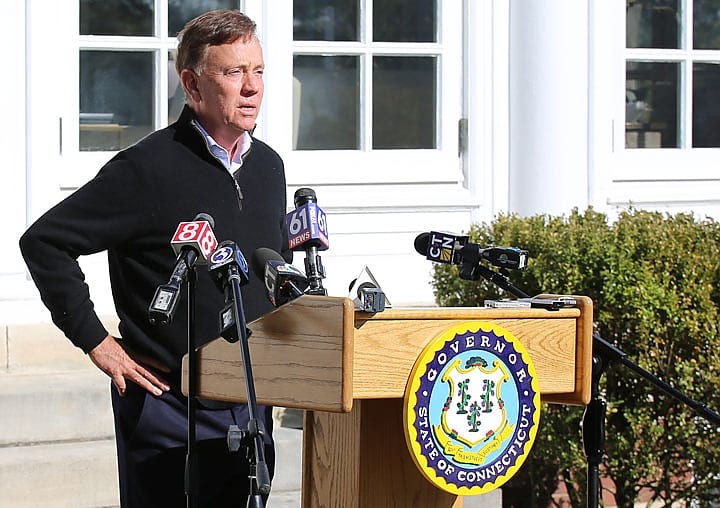 Gov. Ned Lamont had hoped there would be some clarity in the presidential race, but there wasn’t. As for what he plans to do with an expanded Democratic majority in the House and the Senate, he’s not sure yet.

“As you know we’ve got a deficit that’s over a billion dollars. We’ve got to deal with that on a thoughtful basis,” Lamont said Wednesday at the governor’s residence. “In terms of other initiatives and you brought up marijuana or gambling, these are ways we may be able to bring some revenue in over a period of years. They will be on the table.”

What about a millionaire’s tax?

Lamont said he doesn’t believe any taxes would be necessary if former Vice President Joe Biden is elected. Lamont was an early supporter of Biden.

“I’m not going to raise taxes, if I don’t have to raise taxes that’s for darn sure,” Lamont said. “I think we’ll have a lot more clarity in the next couple of months.”

“I don’t think any of those taxes would be necessary at this point. If Biden were going to give us the state and local aid we’re counting on,” Lamont said.

He said the idea of Connecticut jumping forward and raising taxes would put Connecticut at a terrible disadvantage “right when we have the wind to our back. I hope if there is a President Biden we’re going to see support from the federal government that allows our state to go forward.”

What about a state-run public health insurance option?

“We know how important it is to have healthcare available broadly to everybody,” Lamont said.

Lamont said Connecticut is a strong supporter of the Affordable Care Act exchange and can do something at the state level.

“I’m looking at all the solutions I can to make healthcare more affordable broadly speaking to individuals, self-employed and small business,” Lamont said. “You know if our insurance companies can’t come up with a solution maybe the public option will be on the table.”

Sen. Kevin Kelly, R-Shelton, has said he has concerns with the state-run public option because he’s concerned about whether the state can set rates high enough to cover the claims.

“How are the taxpayers protected? There isn’t oversight by the Department of Insurance and there’s no stop-loss,” Kelly said.

Senate Democrats are planning to propose a public option again this legislative session.

Two years ago, a proposal to allow small businesses to purchase state-run health insurance was stripped from the legislation after the insurance industry objected.

But the final iteration of the bill included none of that.

“As a primary industry in the state of Connecticut we would be opposed to any government-run health care plan that competes with the private market,” Halpin said.

Halpin indicated that we can accomplish reductions in small group premiums today by lowering the taxes and assessments currently levied on the premiums of small employers.”