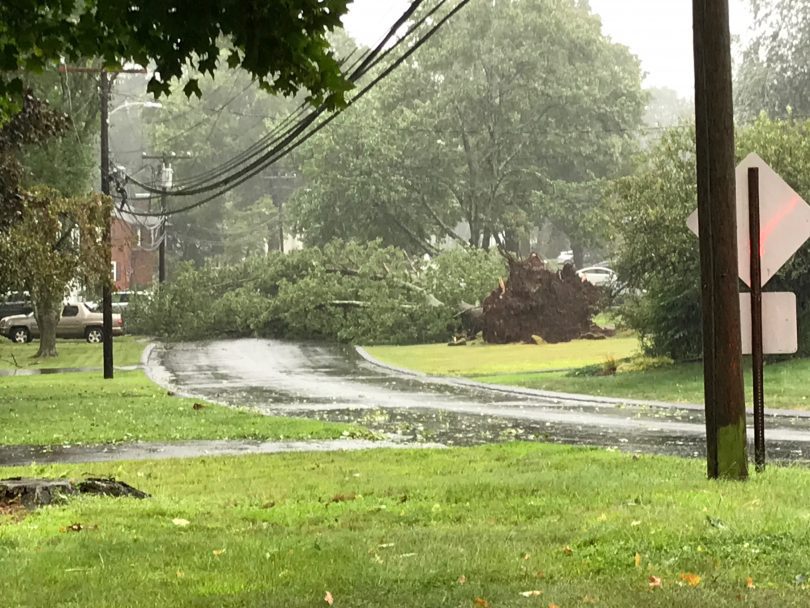 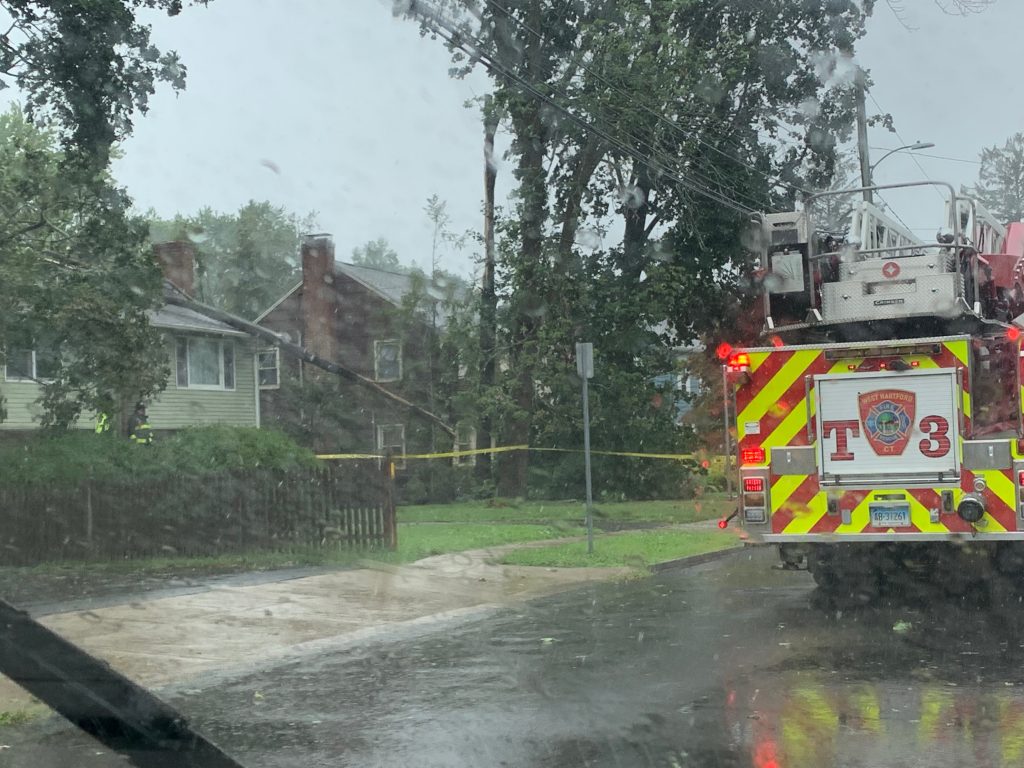 A tree landed on a house on Arundel Avenue. Photo credit: Sydney Lyons

Officials had anticipated that the combination of rain and high winds from Tropical Storm Henri – on top of the already-saturated ground from last week’s flooding rainfall – would bring down trees and knock out power, and as of 4 p.m. Sunday crews from the West Hartford Department of Public Works were responding to 15 separate reports of trees down across roadways in town.

In comparison to storms where limbs snap off trees, on Sunday many of the trees that fell were completely uprooted due to the saturated ground. 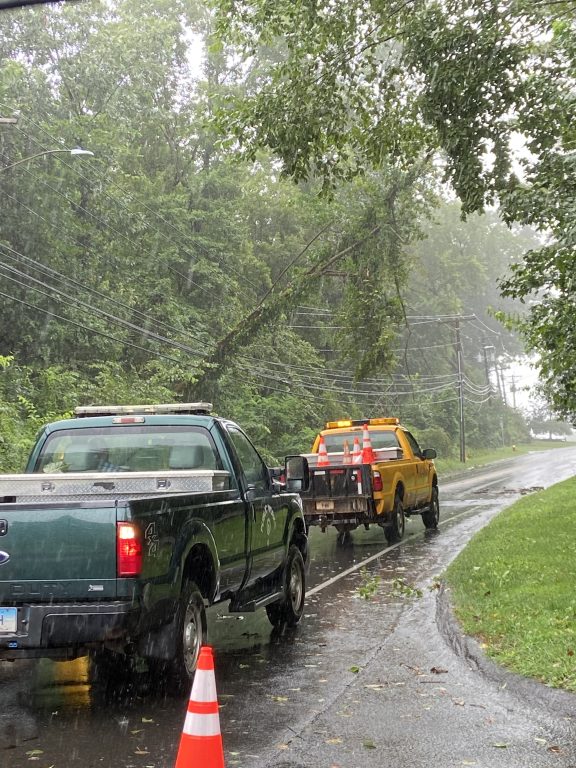 Mountain Road, north of Cliffmore, was closed completely while a tree that landed on the power lines was removed. Photo courtesy of John Phillips

In West Hartford, 360 customers (1.25%)  were in the dark. The outages are spread throughout town, with the largest concentration in the Duffy Elementary School neighborhood, where a tree fell across the road on Spring Lane, according to the Eversource map.

Other reports of downed trees in West Hartford, according to West Hartford Police Capt. Eric Rocheleau, include a tree that fell on construction equipment at Norfeldt Field, a tree on the wires on Stratford Lane, a large tree limb in the roadway at Albany Avenue and Mountain Road, a tree limb on the wires on Miamis, a tree on a house on Pioneer Drive, and a tree blocking the road with wires involved at 21 Walbridge.

As Tropical Storm Henri continued to spin and make its way across the state on a diagonal from southeast to northwest, rains began to let up in West Hartford and winds calmed a bit and began to shift direction. Phillips was optimistic that the worst may have passed.

According to Rocheleau, there were reports of standing water on some local roadways but no flooding.

Mayor Shari Cantor declared a state of emergency for West Hartford early Sunday afternoon, and that declaration remains in effect until terminated.

If you have photos of storm damage that you are willing to share, email Ronni Newton at [email protected].

Check back for updates, and stay safe. 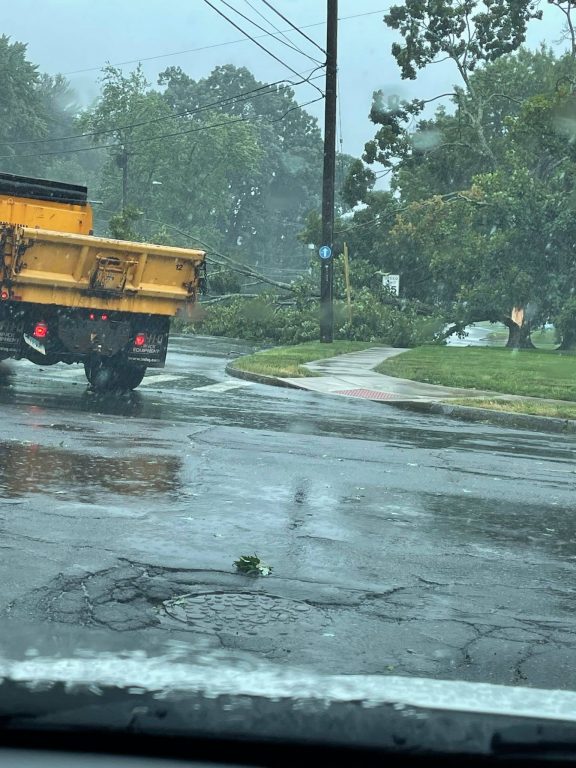 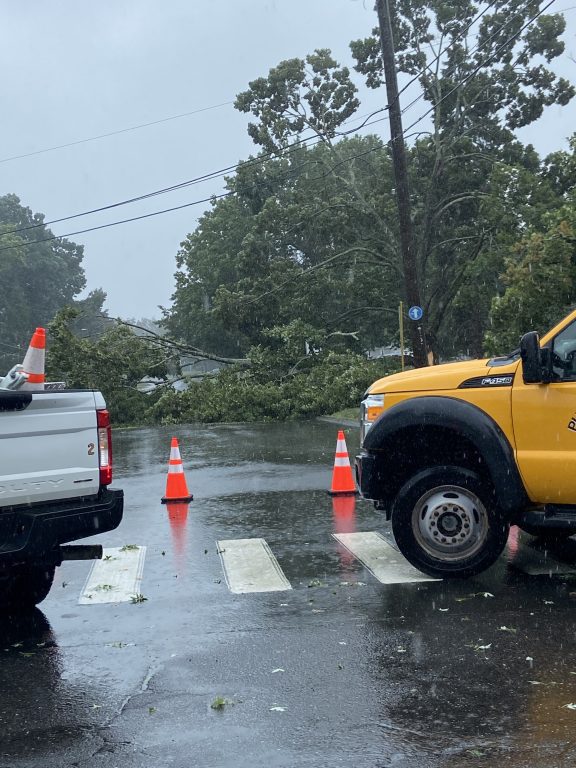 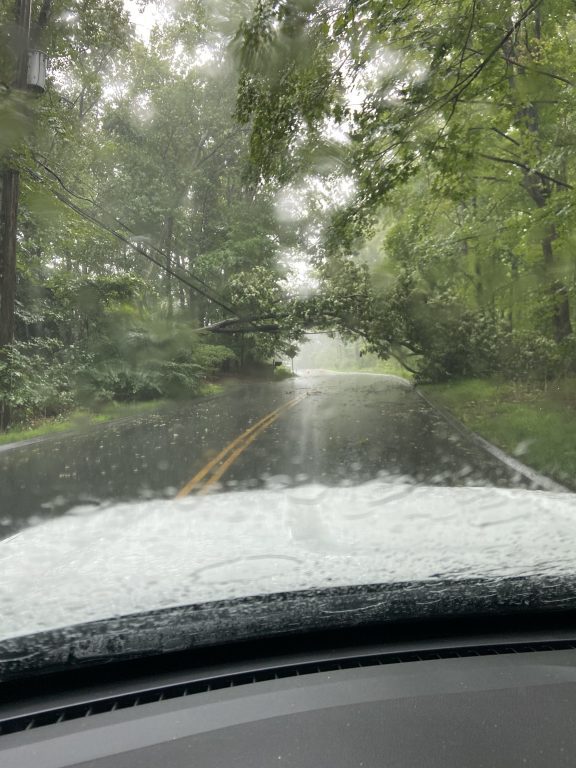 Lower portion of Orchard is blocked by a tree resting on power lines. Photo courtesy of John. Phillips

Mountain Road, north of Cliffmore, was closed completely while a tree that landed on the power lines was removed. Photo courtesy of John Phillips 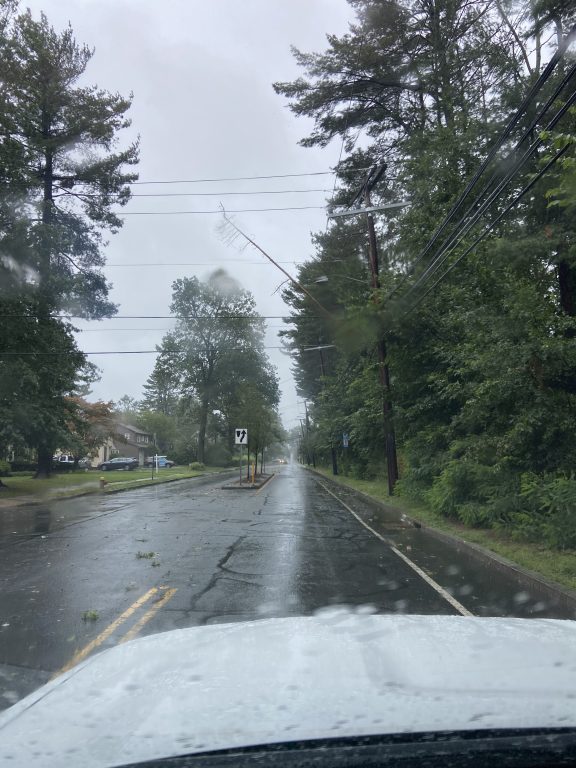 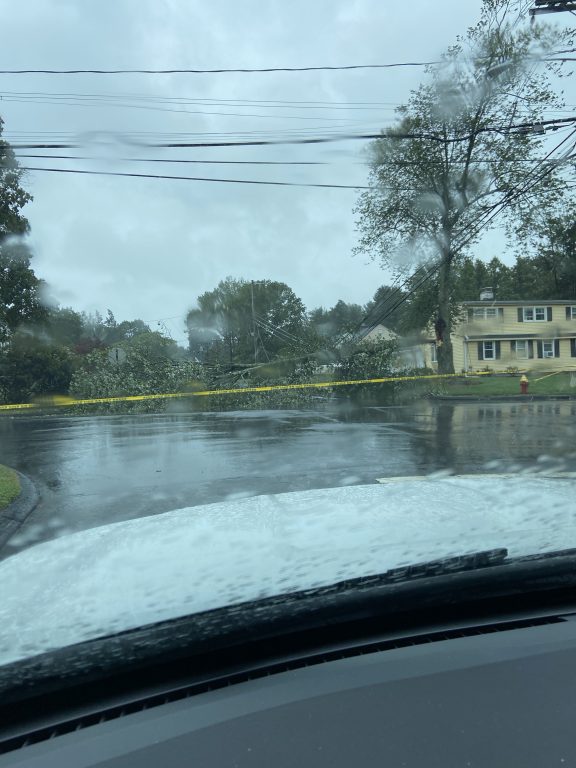 A tree blocking the road on Greenhurst Road. Photo courtesy of John Phillips 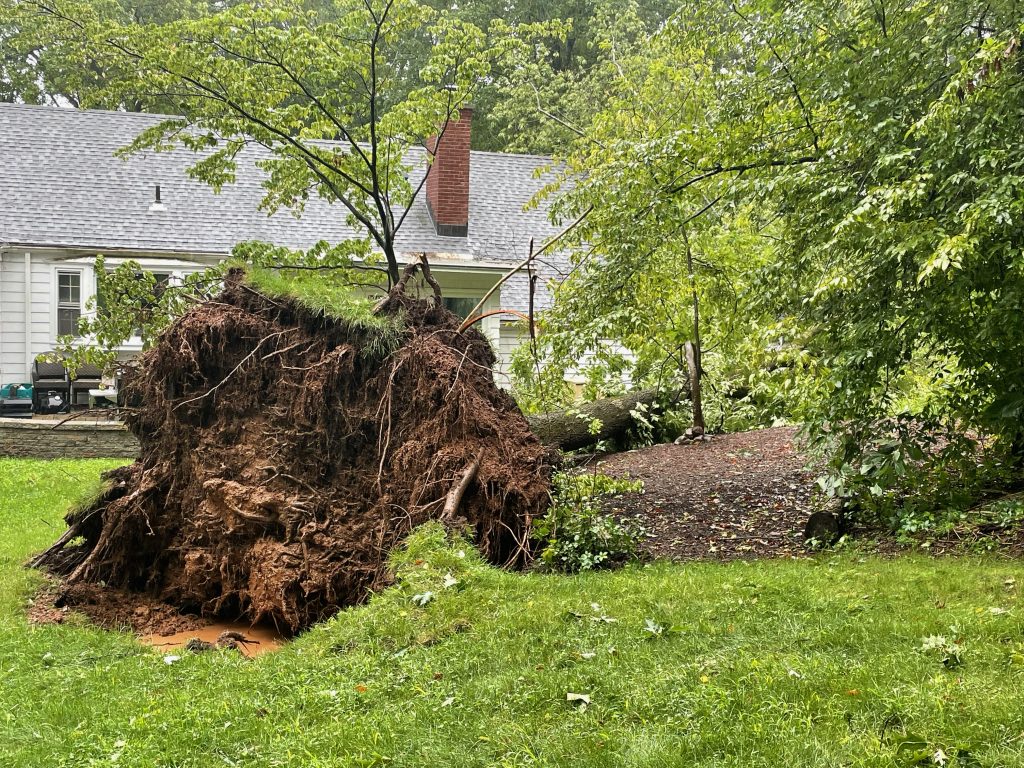 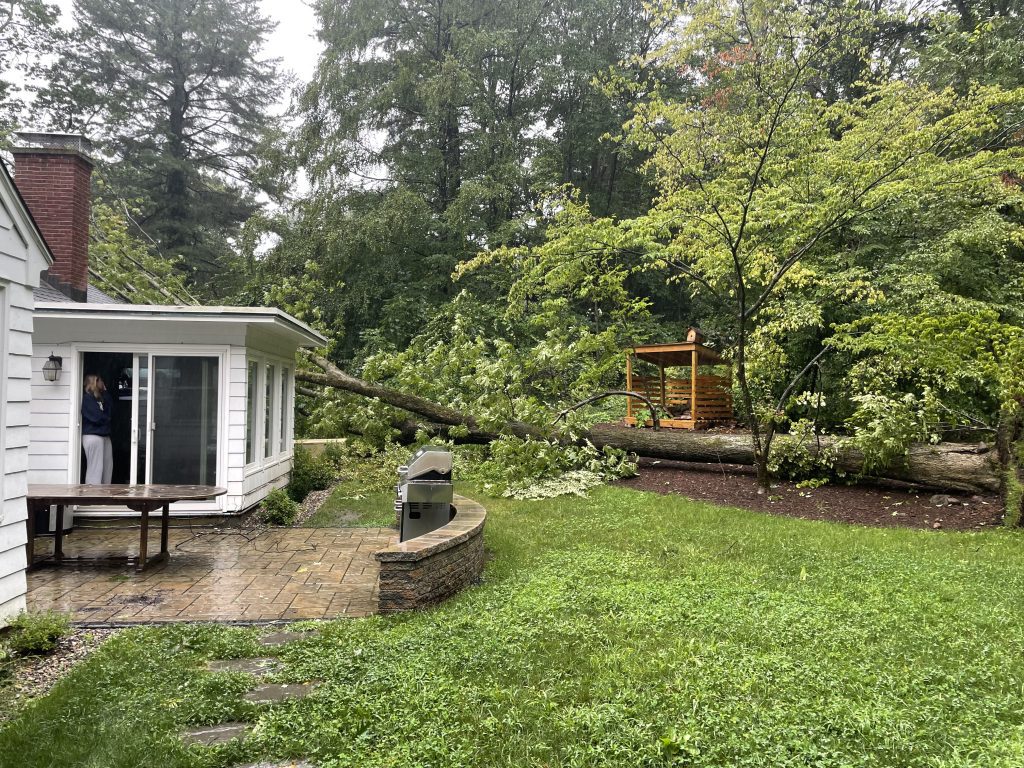 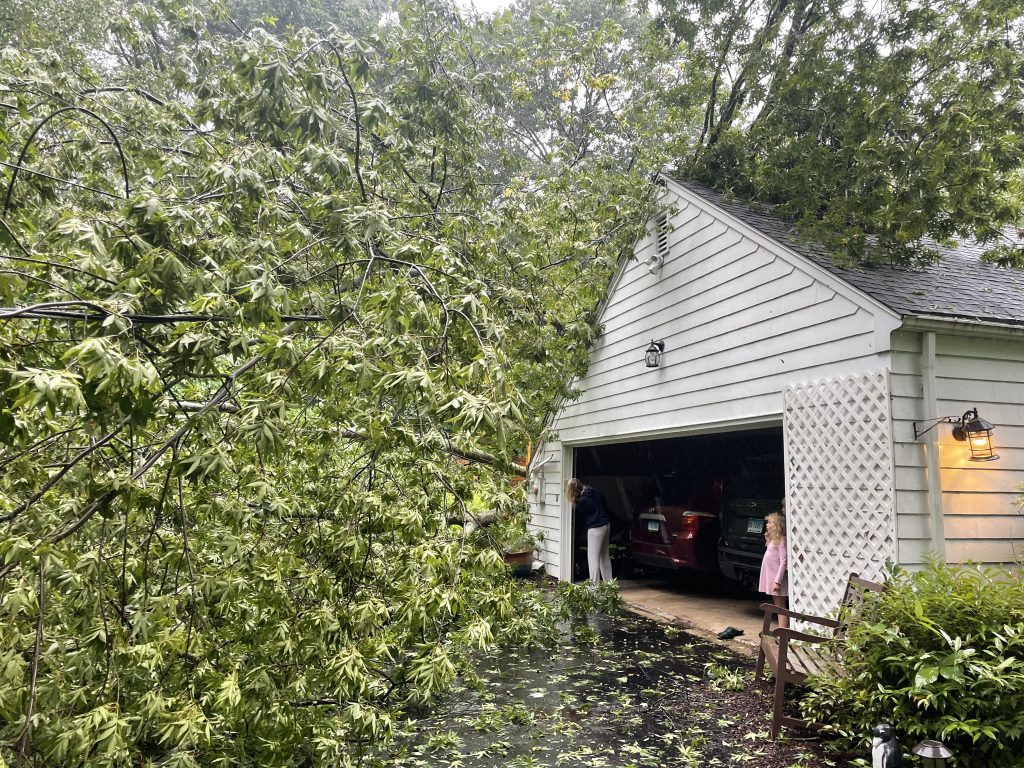