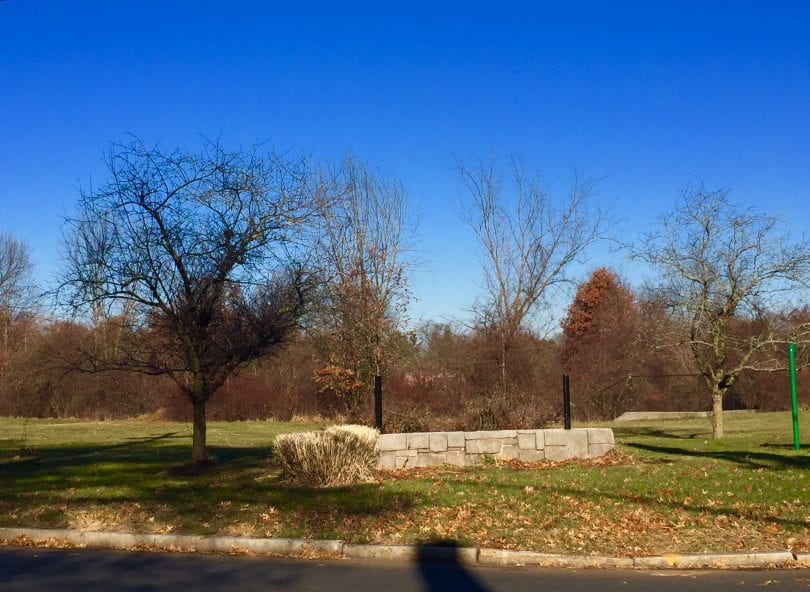 Once UConn moved to its downtown campus in late August, the sign at the corner of Trout Brook Drive and Asylum Avenue, and all other signage, was removed. Photo credit: Ronni Newton (we-ha.com file photo, December 2017) 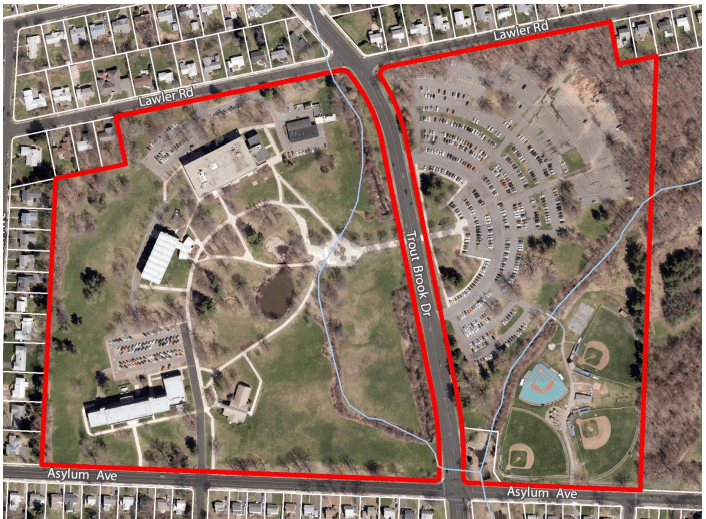 Seven Stars Cloud Group, Inc. (SSC) plans to purchase the former UConn campus in West Hartford for $5.2 million and transform the property into a center for technology and innovation with the development of the global headquarters of Chain Valley on the 58-acre campus.

Gov. Dannel P. Malloy announced Tuesday morning that the $283 million project is expected to create 330 jobs over the next five years. The project will receive a $10 million loan through the governor’s First Five Plus program for capital renovations, which can be forgiven if the job creation targets are met.

According to an announcement released by the governor’s office that followed a Tuesday morning press conference, “Nasdaq-listed SSC is a leading global fintech company that leverages artificial intelligence and blockchain technology to facilitate and enable the transformation of traditional financial assets, as well as industrial, media, and consumer assets into digital ones. With its global reach, SSC works with participants across the financial markets and industry verticals to assist in the securitization, tokenization, and trading of a growing number of both liquid and illiquid assets, by enabling asset digitization processes. SSC’s mission is to leverage the best underlying technologies for digital asset creation, activation, and distribution.”

In layman’s terms, blockchain is a cryptographically secure chain of linked records. The technology was originally developed for use with the cryptocurrency bitcoin.

UConn spokesperson Stephanie Reitz said that the University’s Board of Trustees is expected to meet Friday morning to approve the $5.2 million sale of the property.

The former campus, located at the intersection of Asylum Avenue and Trout Brook Drive, is zoned residential, with a special use permit that has allowed for an educational institution to operate on the site. A zoning change, and establishment of a Special Development District by the West Hartford Town Council, will be likely be required for Chain Valley to move forward.

“The sale to Seven Stars is not contingent on getting the town’s development approval,” Reitz said Tuesday.

She said that Seven Stars will not wait for West Hartford to approve the project before taking care of any necessary environmental work on the site. Concern about environmental liability was one of the primary reasons why the Town of West Hartford terminated its purchase agreement for the property in December 2017.

“They want it ‘as is’ now, which is great for us and they want to be a good neighbor for the Town of West Hartford,” Reitz said.

In the purchase and sale agreement, Seven Stars has agreed to “have a bank post a letter of credit of up to $8 million to provide financial security for the fulfillment of these clean up obligations.” They have also to purchase a pollution legal liability policy for the site.

Town Manager Matt Hart said in a phone interview Tuesday that while he does not have specific details about Seven Stars’ plans, “In terms of what we do know, it sounds very exciting for the town and for the region” to have a worldwide technology center locate its headquarters here.

“They have expressed a desire to work collaboratively with the community and to be a good corporate citizen,” Hart said.

Seven Stars has indicated that the development would maintain the open look and feel of the campus, and a desire to create a “showplace for the town and region.” They are still considering whether all five of the buildings currently on the site would need to be demolished, Hart said.

The announcement from the governor’s office states that “plans for the site include a smart and aesthetically pleasing combination of rehabilitation of existing structures, the razing of others, and modest new construction.”

In April, following a community engagement process, the West Hartford Town Council adopted a vision statement for the property, as well as a set of guiding principles, one of which is: “Intensity and changes of use must be carefully analyzed and reviewed for compatibility with the neighborhood. Specific consideration should be given to ensure that the open look and feel of the campus is maintained; that ample buffers, trees and green areas are protected; and that public access and use to meaningful areas of functional open space is preserved.”

Mayor Shari Cantor, who is a member of the UConn Board of Trustees, cannot comment on the proposal, but Council member Dallas Dodge, who chairs the Ad Hoc Subcommittee on Economic Development that has been discussing the campus and spearheading community engagement, said Tuesday that “West Hartford should be very proud that we’re the kind of community that’s so attractive to global new technology business.”

Dodge said he plans to keep an open mind. “We’re the final land use authority and I look forward to seeing any proposal. … There are a lot of details we still need to learn.”

Director of Community Development Mark McGovern said that he expects that the proposal will include an application for it to become a Special Development District.

SSC has agreed to honor the existing lease with UConn for the baseball fields and other recreational facilities on the site, which expire in 2020 and have the option for another five-year extension. Hart said that discussions with Seven Stars have included “preserving the recreational assets and perhaps adding to them.”

Hart said that he met with Ben Wu, brother of SSC Executive Chairman and CEO Bruno Wu, when he toured the campus several months ago, but since the town does not own the land, he and other town officials have not been actively involved in any negotiations.

“The capital investment and job creation potential could certainly positively impact our local and regional economy,” Hart said. “The addition of new research workers to our town would add to the vitality of the community.”

Bruno Wu, in a statement released Tuesday morning, said, “We are thrilled to have found such a wonderful spot right here in central Connecticut. It is here that the first students to ever leave China, the Mission Boys, settled in the late 1800s to study Western science and engineering. It is in the spirit of these students that we will build a facility so modern and dynamic that it will attract the best talent and companies, making this site the blockchain capital of the U.S. and the world. This fantastic location provides access to a highly skilled workforce, as well as more than 40 institutions of higher learning, and several major metropolitan areas all in proximity of this site. It is an ideal location for our firm to write our next chapter, and we could not be more excited to soon join this wonderful community in West Hartford.”

Hart said he is also pleased about SSC’s plans to take on the environmental challenges of the site.

“The future development of the UConn campus is a priority for the Town of West Hartford. The Town will now be in a position to apply the vision statement and guiding principles that resulted from our community engagement process to this proposal,” Hart said. “The Chain Valley initiative also presents an opportunity to address the environmental challenges of the site in a comprehensive manner,” he said.

“I would like to commend the governor, the state Department of Economic and Community Development, UConn, and Seven Stars Cloud Group for their vision and hard work to develop the proposal,” Hart said. “We look forward to learning more about it.”

There has been varied opinion on whether or not the town still maintains the right of first refusal since the town terminated its purchase agreement. Hart said he has not seen the term sheet of the agreement between UConn and SSC, which could determine how state statute comes into play. “The town will look into that issue,” Hart said. UConn has been up front with the town throughout the process, “and I expect they will continue to be,” he said.

In a statement Tuesday, Gov. Malloy said, “Thanks to our best-in-the-nation workforce, high-quality education system, and forward-looking vision, Connecticut has the potential to be a hub for investment in fintech and other high-tech industries. SSC’s commitment to our state shows that our strategy for recruiting and retaining cutting-edge employers is working. When companies like SSC decide to locate and grow here, combined with unprecedented investments in making our communities more livable and walkable, it makes Connecticut a more attractive place to live and work. Today’s announcement is a major economic milestone for the entire Hartford region.”

According to the announcement, SSC plans to partner with the team that led the building and development Europe’s fintech and smart city hub, Level 39, to “make Chain Valley one of the world’s most impressive technology and innovation hubs.”

State Rep. Andy Fleischmann, who represents the 18th State House District where the UConn campus is located, expressed his excitement Tuesday about the proposal.

He said he is pleased that the plans would not be for a significantly larger footprint than the existing campus, that the company will be environmentally friendly, and that he is hopeful that SSC’s expressed desire for a parklike setting will be pleasing to neighbors – of which he is one.

Currently portions of the campus are closed off with a six-foot chain link fence to prevent access to vacant buildings and grounds where PCBs (polychlorinated biphenyls) have been found.

“The question about accessibility to the walkways will legitimately be raised during the zoning process, and our community has leverage because this is a fantastic site,” Fleischmann said. If that’s still possible, welcoming this company will definitely be a “win-win.”

The projected 330 jobs are far less than the number of students, faculty, and staff that utilized the campus property every day, and Fleischmann said he anticipates that the footprint of the parking lot could potentially be reduced to create more green space.

“The fact that Dr. Bruno Wu, Executive Chairman & CEO of SSC, chose Connecticut, and particularly West Hartford, to invest hundreds of millions of dollars in private equity, illustrates the quality of life and highly skilled workforce Connecticut has to offer,” State Rep. Joe Verrengia said in an announcement lauding the project. “I am looking forward to seeing this facility take shape and for the high-tech jobs that will be created.”

Department of Economic and Community Development Commissioner Catherine Smith said in a statement, “Seven Stars Cloud Group’s vision for a thriving technology-centered business campus at this site is one I enthusiastically support as it will be a great benefit to the greater Hartford region and will continue to promote the area as a center for tech talent.”

After conducting a nearly 18-month due diligence process that began in July 2016, the West Hartford Town Council voted in December 2017 to terminate the purchase and sale agreement with UConn due to the uncertain and potentially significant costs of remediating the property. The original purchase price was $5 million, and in April 2017 both the town and UConn agreed to drop the price to $1 million after the discovery of a greater-than-anticipated level of PCBs on the site. UConn extended the due diligence period seven times, and the agreement was terminated prior to the final deadline which had been set at Dec. 15, 2017.