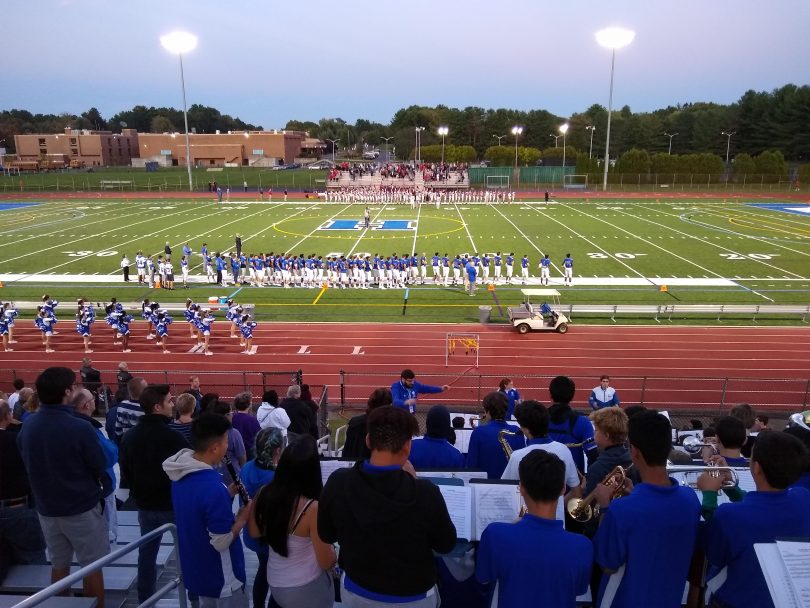 Hall picked up its first win of the season in an offensive showdown against Cheshire.

Lizardi scored two rushing touchdowns and one on a kick return, twice answering a Cheshire score. Hall’s special teams and defense also played a key role in giving the Warriors favorable field position on nearly all of their drives.

“What a great, competitive game,” said Hall head coach Frank Robinson. “[Cheshire] made some amazing plays that made the game really tight. I’m just happy that we were able to respond and get that last that touchdown drive, and obviously, that was the difference in the game.”

Just seconds into the second quarter, Jason Shumilla found Alec Frione for a 25-yard touchdown to tie the game for Cheshire, but Lizardi immediately put Hall back on top 14-7 with a 91-yard kick return to the end zone at the 11:39 mark.

“We needed a momentum swing for my team,” said Lizardi. “I realized I was in the perfect position to do it. The line was doing a phenomenal job – out of this world.”

The Warriors took a 21-7 lead into halftime as Diego Ballesteros added a pick-six from five yards out with nine minutes left in the second quarter.

Late in the third quarter, Shumilla and Frione connected on a 69-yard score to cut the lead to 21-14.

In similar fashion to Lizardi, Da’Jaun Banks nearly returned the ensuing kickoff for a touchdown, but he set the Warriors up at the 15-yard line. Lizardi added a 4-yard rushing TD to cap the two-play drive with 30 seconds remaining.

The Rams again made it a one-possession game, 28-21, with an 80-yard Shumilla-to-Frione connection 16 seconds later.

On the first play of Cheshire’s next drive, Jake McAlinden, who had been mostly shut down by Hall’s defense, broke off a 73-yard touchdown run to tie the game at 28 with 10 minutes left in the fourth quarter.

Despite the deadlock, the Warriors were in no rush on their ensuing possession. Hall milked six minutes off the clock on an 11-play, 67-yard drive. Quarterback Matt Keller finished the drive with a 1-yard rush with 4:15 to give Hall the lead.

The Rams showed quick-strike ability earlier in the half, but they slowed their pace on their final possession. Cheshire (1-1) converted two fourth downs on an 18-play drive, advancing to Hall’s 12-yard line with 12 seconds to play.

Shumilla’s fourth-down pass fell incomplete in the end zone, however, as the turnover on downs to secure the win for Hall.

“I’m just so happy for the kids,” said Robinson. “They’re working really hard, so it’s just great. It’s great for the kids, the coaching staff, the school, and then the fans were fantastic.”