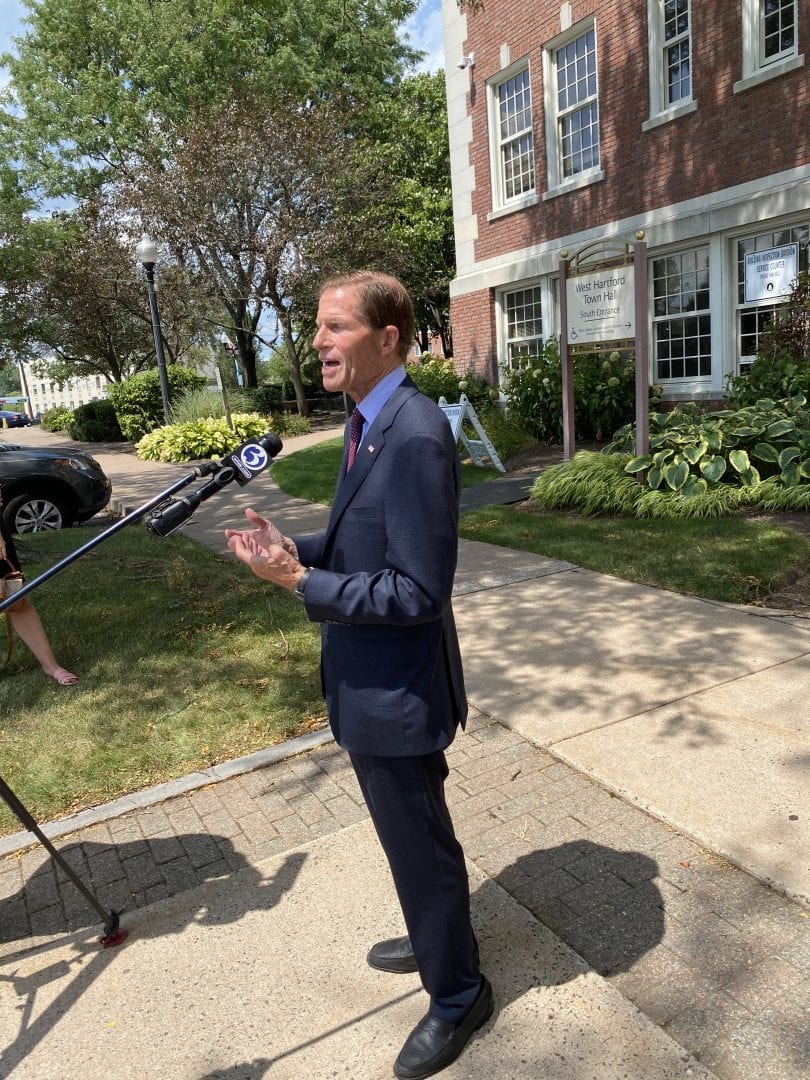 U.S. Sen. Richard Blumenthal visited West Hartford on Tuesday as part of a statewide tour both to examine the absentee ballot voting process and to address concerns about Eversource, the power company that has been widely panned for their response to the outages caused by Tropical Storm Isaias which hit the state last Tuesday.

He got the chance to observe and speak with the officials and volunteers involved with the voting process and then later addressed the media about his qualms regarding the way Eversource had handled the recent crisis.

Blumenthal was extremely impressed by the way the Town of West Hartford and the state as a whole had handled absentee ballot voting, and was very complimentary of the volunteers and officials who made the whole process work.

“I’m very impressed by the efficiency and by the care with regards to COVID … but most importantly the dedication from the folks who were working here.”

Aug. 11 is primary day here in Connecticut, and as Blumenthal was speaking, many West Hartford residents filed into Town Hall to vote or to drop off their absentee ballots. In-person turnout was down from the previous primary, but Blumenthal was extremely encouraged by the number of absentee ballots submitted.

The senator then turned his attention to the current power crisis facing Connecticut, taking direct aim at Eversource with several scathing comments about the company’s handling of the widespread power outages, which affected well over 500,000 people statewide.

“Lot of folks in the dark that are more angry and frustrated than ever … they are absolutely aghast and appalled and angry rightfully, because there is no good reason that they should still be in the dark.”

As of Tuesday morning, there were still 14 Eversource customers in West Hartford and over 26,000 customers statewide without power.

Blumental went beyond simply criticizing Eversource. He demanded that the company provide refunds to the parties that saw their incomes disrupted by the outages.

“Eversource should be making refunds to towns and cities across the state that have literally lost millions of dollars in expenses caused by Eversource’s own failure to prepare, and they should also be making refunds to small business, homeowners, and households that are struggling as well.”

The senator expressed his outrage with the profits generated by Eversource, which he said operates essentially as a state-sanctioned monopoly.

“It [an investigation into Eversource] ought to be aimed at reducing the rate of profits for this company … and it ought to look at changes in management … I’ve asked the CEO to resign.”

Blumenthal took direct aim at Eversource CEO James Judge, attacking him for his lack of public visibility as well as what he deemed excessive compensation.

“The real question is where has the CEO been? He’s been invisible. He should have been front and center, facing the public, answering questions, and holding himself accountable. Instead, he’s nowhere to be seen … he makes close to 20 million dollars, that certainly is way in excess based on what we’ve seen over the last eight days.

“My view is that he should resign. He’s making way too much and if we have performance-based pay and rates determined on reliability and actual service, consumers would be a lot better off,” Blumenthal added.

The senator concluded by addressing the power of public opinion, suggesting that the will of Connecticut’s population might help bring about changes to the way Eversource conducts their business.

“I think after this fiasco, the chaos caused by Eversource’s massive miscalculation, there’s going to be an outcry for major reform – reviewing how the executives are paid, how the rates are set, how consumers can be better guaranteed a lower price and more reliable service … but in the meantime, refunds!”