West Hartford Police have confirmed that one suspect is under arrest and the other was shot by a state trooper fleeing another robbery and later died. 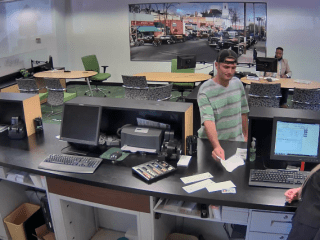 The man in this surveillance photo taken Aug. 13 at the TD Bank at 143 South Main St. has now been identified as Gjergji Cumani, 37, of Worcester, MA. Photo courtesy of West Hartford Police

Suspects in the three bank robberies that took place in West Hartford within a one-week span have been identified and apprehended according to police.

Lt. Ted Stoneburner confirmed Tuesday that 37-year-old Gjergji Cumani has been charged in both robberies of the TD Bank at 143 South Main St. The first robbery took place on Aug. 6, and the second robbery of the same bank took place exactly one week later, on Aug. 13.

According to Stoneburner, Cumani was apprehended at his parent’s home in Worcester, MA, on Friday, Aug. 21. There was an outstanding warrant for his arrest based on the Aug. 3 robbery of a Country Bank in Worcester, and he has also been tied to robberies of the TD Bank in West Hartford.

The First Niagara Bank at 55 South Main St. in West Hartford was robbed on Aug. 6, just hours after the first TD Bank incident. Stoneburner said that police have identified that suspect as Christopher Anderson, 53, of Hartford. 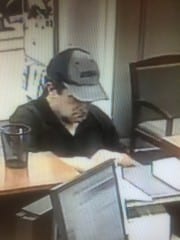 This man, whose image was captured in this surveillance photo after he robbed the First Niagara Bank at 55 South Main St., has been identified as Christopher Anderson. Photo courtesy of West Hartford Police Department

Stoneburner said that Anderson was involved in a car chase after robbing a First Niagara Bank branch in South Windsor on Friday, Aug. 14. Manchester Police as well as state troopers assisted South Windsor Police in the chase.

The chase ended in Bolton, Stoneburner said. An officer fired a Taser at Anderson but according to detailes provided in an article in the Hartford Courant, Anderson removed the probes and charged at officers with a box cutter.

Stoneburner said Anderson was shot by a state trooper and died of his injuries on Sunday, Aug. 16.

Anderson had a history of bank robbery, Stoneburner said. He was shot and wounded by New Haven Police in 2006 after a standoff and later convicted of and served time in prison for several bank robberies in New Haven and Woodbridge.

Stoneburner said that although there were some coincidences involving the TD Bank and First Niagara robberies in West Hartford, police have not yet been able to determine if they are linked. “Right now there is nothing that ties them together,” Stoneburner said.