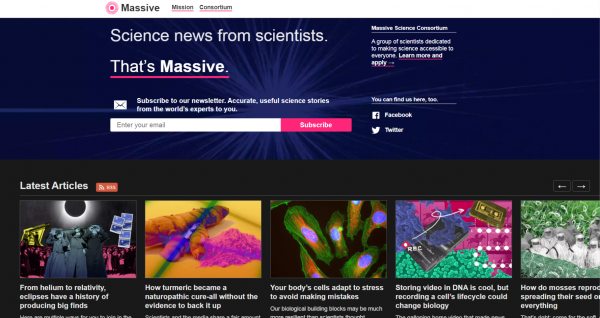 Kira Goldenberg, a graduate of West Hartford’s Conard High School, has been named editorial director of the website Massive.

You may have heard, that the first total solar eclipse visible from the United States in 26 years will be seen in much of the country on August 21.

While Connecticut is not in the prime viewing path, interest and anticipation is rising even in the Land of Steady Habits due to the unusual nature of the occurrence.

For the uninitiated, an article appearing in the latest on-line edition of the website Massive explains that “During a total solar eclipse, the moon covers the bright disk of the sun. If the sun were a perfect sphere, it would disappear entirely, plunging the viewer temporarily into full darkness. But beyond the surface of the sun extends the corona. Full of beautiful loops and streamers, the corona is normally invisible against the blinding light of the full sun.”

The article was written by Jesse Feddersen, a fourth year PhD Candidate in the Department of Astronomy at Yale University. In addition to his academic research and teaching work, for the past two years he has been presenting live planetarium shows to the public at Yale University’s Leitner Family Observatory.

Feddersen notes that “because of its path over populated areas, the August eclipse will likely be the most viewed in history. Two teams plan to exploit this fact to coordinate observations across the United States,” in order to “combine images from 60 telescopes along the track of the eclipse.” It can best be seen along a path from Oregon to South Carolina.

“The continuous view of the darkened Sun,” he adds, “will create a data set for researchers to study.”

It is precisely that connection – between regular citizens and scientific experts – that is behind the launch of the Massive website late last year. As the founders describe their mission, “we work directly with researchers to transform papers in their field from complex, technical documents into stories that anyone – including other scientists – can understand and enjoy. We focus on eliminating jargon, adding storytelling and perspective, and teasing out the big questions the research is asking without sacrificing depth.”

Put most succinctly, the website headlines, “Everyone should have access to science.” Towards that end, they’re in the midst of enlisting “a group of scientists dedicated to making science accessible to everyone,” by forming the “Massive Science Consortium.”

Recent articles include contributions from a molecular pharmacologist, a genetics expert, a biochemist, and a botanist.  The site offers free subscriptions to its newsletter, which highlights contributions from scientists in a range of fields worldwide.

The three founders – Nadja Oertelt, Gabe Stein and Allan Lasser – have added a veteran journalist who got her start in Connecticut to work directly with scientists in editing their work for a mainstream audience.  Kira Goldenberg, who had stints with the Hartford Courant and New London Day earlier in her career, has more recently been a leading staffer at The Guardian and Columbia Journalism Review. She joins Massive as Editorial Director, energized by the potential of the fledgling venture.

“I’ve helped academics and reporters edit and hone their writing for the public as an editor at The Guardian and at the Columbia Journalism Review. I love working with people to make their writing the best it can possibly be,” she says on the Massive website.

Massive is a for-profit company funded by Bloomberg Beta, General Electric, and individual investors.  The founders explain the motivation that inspired the venture:  “We believe the world would be a better place if more people understood and trusted science, and used scientific reasoning to make sense of their world. With notable exceptions, we think that most of today’s science journalism and science communication efforts fall short of advancing this goal.”

The Massive team aims to combine “the storytelling and audience development techniques of a media company with the accuracy and authority of professional scientists and science communicators.”

That the first total solar eclipse visible in the U.S. in a quarter-century happens to occur during their first year of operations was, although not unexpected, largely coincidental.