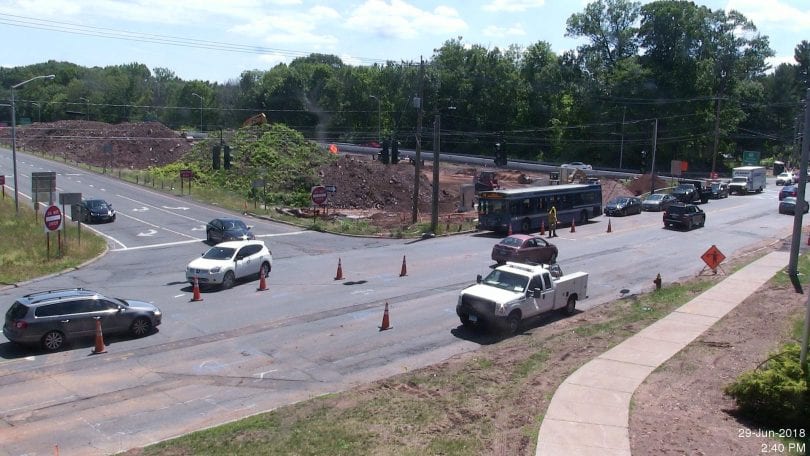 Motorists are advised that there will be more slowdowns at the Park Road/I-84 interchange as construction continues, and other projects throughout town will result in detours.

The major construction project to relocate the exit ramp from I-84 to Park Road (Exit 43) and incorporate other changes to the stretch of Park Road from Overbrook Road to Trout Brook Drive has been underway since last fall, and Town Engineer Duane Martin said that what has been “minor” disruption to traffic flow will become much more dispruptive.

“We’ve been encouraging people to get used to using the South Main Street or Caya Avenue/Prospect Avenue exits,” Martin said, referring to drivers using I-84. At least one lane in each direction will remain open on Park Road, but “you’ll get to the point in the next month where you’ll want to avoid it,” Martin said.

The eastbound and westbound off-ramps are now squeezed, as is the on-ramp, where drainage and conduit work is underway.

The traffic pattern shift is in its second stage now (of four total), Martin said, and traffic exiting the highway will continue to be shifted as concrete beneath the existing off-ramp is demolished.

The subbase layer of material will soon be laid to complete the regrading of the off-ramp, Martin said.

“The most disruptive work coming up next is drainage work on Park Road near the ramps, and in the intersection with Park and Trout Brook Drive,” Martin said. The elevation of Park Road is being dropped so that the low point will not be at the end of the off-ramp, and the bridge over Trout Brook is being widened.

“They will be excavating curb-to-curb, probably later this summer,” Martin said.

The town’s Engineering Division meets with the contractor, Paramount Construction, every other week and is being kept updated on the progress.

The interchange, West Hartford’s busiest, handles 30,000 vehicles per day, many more than it was designed to manage.

To keep updated with the progress of this project, visit the project website at www.WestHartfordCT.gov/ParkRd. 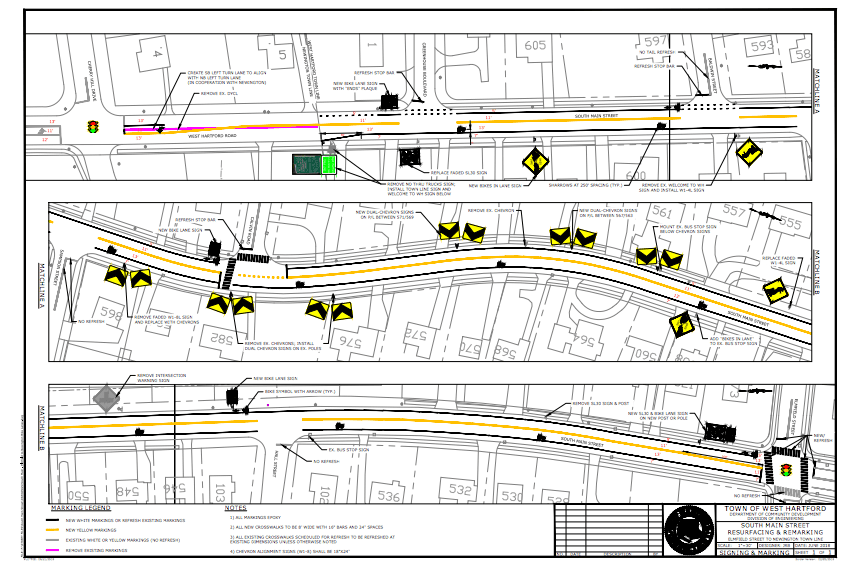 The next phase includes several heavily-traveled roads, and in some cases work will be done at night, or result in complete closure for several days.

South Main Street, from Elmfield Street to Newington town line, will be repaved, including in the intersection of Elmfield and South Main, rendering Elmfield unavailable as a detour.

Northbound lanes will remain open. Southbound traffic will be detoured east on New Britain Avenue to Newington Road during the milling and paving process. The roadway will be closed in both directions for the final repaving.

Martin said that the work on South Main Street is slated to begin on Monday, July 9, and if weather cooperates will be complete by Friday, July 13.

Maps of detours can be found below. Click here to see the construction notice that was sent to impacted residents.

When complete, in accordance with the town’s Complete Streets Policy, a dedicated bike lane will be added to the southbound side of South Main Street, while the northbound lane will be a shared lane. “It’s the exact same approach as on Boulevard,” Martin said. Parking will not be permitted in the bike lane. Martin said that he has gotten feedback from two residents – one of whom was unhappy about the loss of on-street parking on his side of the road, and another who expressed general concerns about road safety. He said that the western (southbound) side of the roadway was chosen in part because there are several houses that share a long, setback driveway and there is less on-street parking on that side.

Caya Avenue will be milled and repaved, and Martin said. That work is scheduled for July 12-14, weather-permitting, and will begin at 6 a.m. In advance of the repaving, Public Works will be replacing catch basins as needed.

Shield Street is scheduled for repaving, and that work will be done at night, from 8 p.m.-7 a.m., in order to minimize impact on businesses, Martin said. Work is scheduled to begin on July 13 and be completed on July 22, depending on the weather. Catch basins will be replace in advance, if needed.

Dexter Avenue, near the Public Works facility, will be reclaimed, with work scheduled to begin on July 16 and finish on July 24. The existing road surface will be ground up to become the roadway base, and it will then be repaved. Catch basins will be replaced in advance if needed. The reclaiming work will be done during the day, but paving will take place between the hours of 8 p.m. and 7 a.m. to minimize disruption to businesses.

Westpoint Terrace, from Ridgewood Road to Conard High School, will be milled and repaved.

A third round of milling and paving is tentatively planned to begin in September, Martin said, but the names of the streets will not be released until sometime in early August.

Several of the projects are underway, including Wilfred Street where draining, curbing, sidewalk, and driveway apron replacement has been completed. The base layer of asphalt was applied, but some of the work needed to be redone. The final paving will be done in July, and the landscape contractor will be restoring the grass as well.

Work is about halfway complete on Bonny View and Smallwood Roads, with granite curbing and sidewalk replacement in progress. The entire project should be complete in about three weeks.

The reconstruction of Bainbridge Road, from Ballard Drive to Foxcroft Road, should begin in mid-July, Martin said.

Martin said that the MDC is completing its water main/sewer work in the area, and the impact on the existing roadway surface has been extensive. The MDC has agreed to pay for a portion of the reconstruction of those roads. Only the curbing that has been damaged will be replaced, however, and unlike complete reconstruction, concrete driveway aprons will not be installed.

Martin said that the Engineering Division will also be overseeing a Leisure Services project for the paving of the upper parking lot near the Fernridge Park tennis courts.

The following notice was provided by the West Hartford Police Department regarding a detour beginning July 5 and scheduled to last through early September on Talcott Road. The map of the suggested detour is also below. 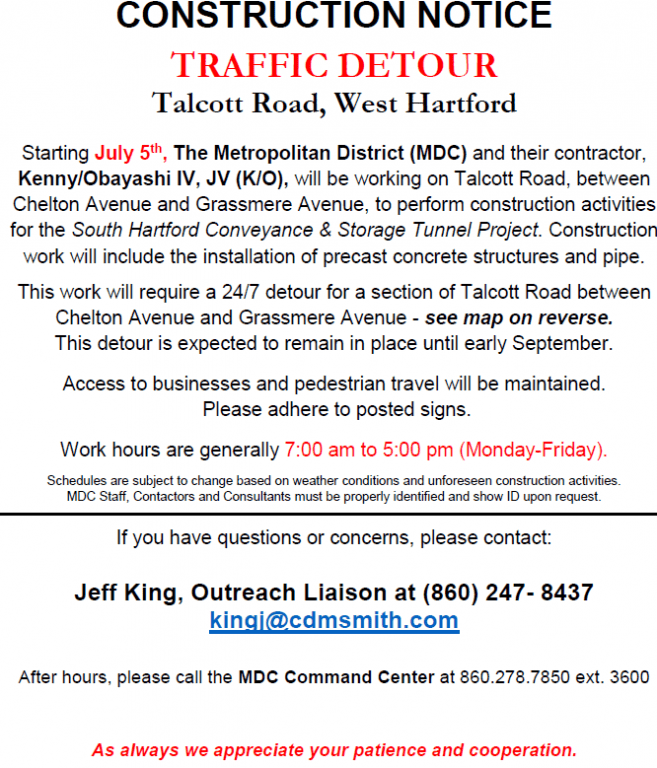 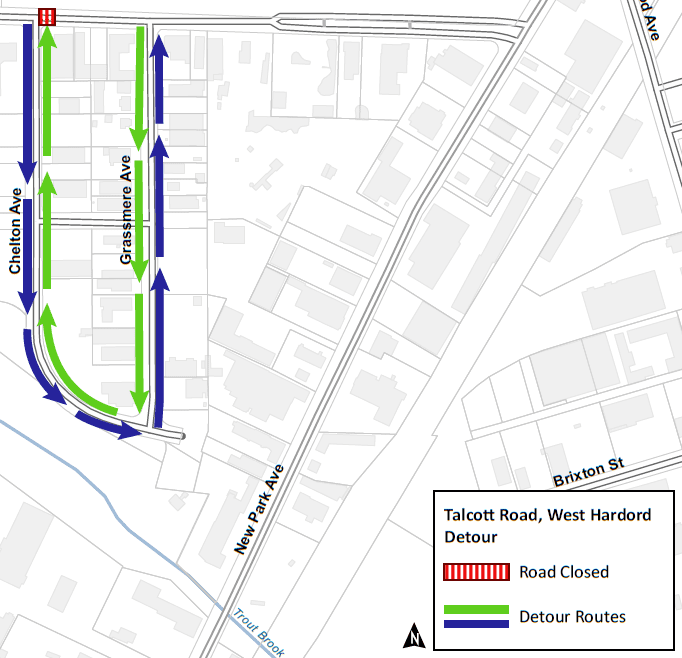