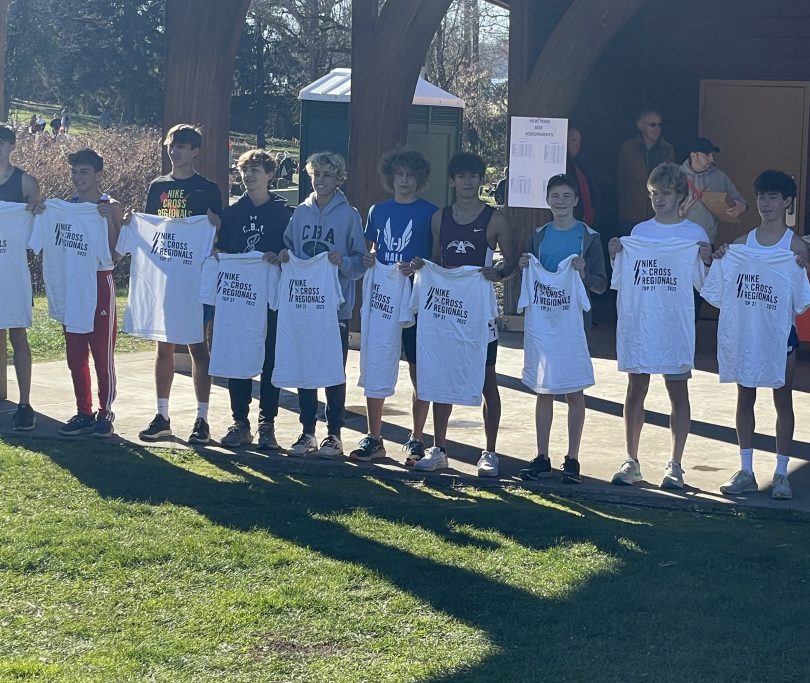 Donovan Connole, Hall's top finisher in the Open Race, earned a shirt from NXR for placing in the top 21 spots. He is 6th from the left, wearing a blue hall shirt. Courtesy photo 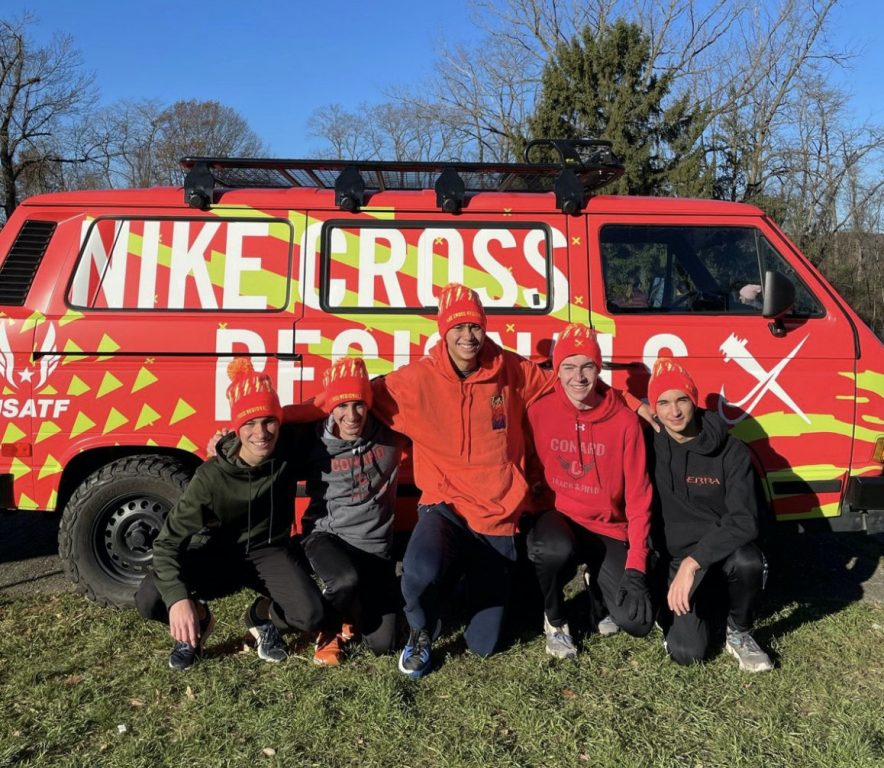 Through long, and already remarkable seasons, Hall and Conard’s boy’s cross country teams traveled to the Nike Cross Regional Northeast championships down at Bowdoin Park in Poughkeepsie, New York on Saturday to compete against the top teams across all of the Northeast.

The top seven athletes from Hall were entered in the championship race, in contention for a spot to the Nike Cross Nationals championships next Saturday in Portland, Oregon. Christian Brothers Academy from Lincroft, New Jersey was the favorite to win, as throughout the season they have been ranked as one of the top teams in the nation. Since only two teams were able to qualify, there was just one other spot that many teams were in the running for, Hall included.

In the Northeast Open race, Conard’s top seven athletes, along with various other Hall athletes, competed against many other teams to see how they would stack up against the Northeast. Many returning teams from the previous New England Championships such as Bishop Hendricken from Rhode Island and Connecticut’s Danbury High School were also in the mix of competition in both races.

Leading up to the race, the plan was to keep race week easy and maintain the fitness that the season has brought them.  Unfortunately, as Saturday crept up, a few of the athletes fell sick to illness but were still anticipating a shot at the spot for NXN.

Senior Captain Colin Goldschmidt said, “The plan leading up to the race was to focus on the moment and to treat it like every other race this season. We knew that there was some sickness and injuries lingering around but we knew that we needed to work through them.”

After a long-fought race against the top teams across the Northeast region, Hall’s team placed 10th overall out of the 31 teams that competed. Hall’s top athlete, junior Isaac Mahler, finished 37th, crossing the finish line first for the team in a time of 16:49.1.

Although the result was not what the athletes had desired, each guy still raced to their hardest despite illness, minor injuries, and other uncontrollable factors. This race also marked the end of cross country for many of the seniors.

“We were obviously disappointed with the outcome of the race but it made us realize how great our season had gone, and we’re all super happy with all we’ve accomplished,” said Allen, a senior captain.

“Coach Brown is someone who brings great enthusiasm and knowledge to the table. He cares about each individual, no matter how fast or slow they are. I think as a whole the team feels much more connected this year and like one big family,” said Conard junior Evan Piccioli.

Nonetheless, Hall’s boy’s cross country team had a season that is never to be forgotten. Under coaches Jeff Billing, Mike Lage, Everett Hacket, and Travis Taylor, the team was able to achieve accomplishments that had never been reached before this season. From going undefeated in all dual meets, to starting the championship season with a win in the CCC Championships, to defending the State Class LL Championship title for a second state championship for the team, to earning the school its first State Open Cross Country championship title, and finally winning the New England Championship title, the athletes had already rewritten the history books for Hall this season.

“It’s hard to put into words what these young men have done,” said Billing, the head coach. “The more I reflect on this season, the more in awe of them I become. They were undefeated in the state of Connecticut, and on their best day, they were the fastest high school cross country team in all of New England. I say that out loud and just shake my head. It’s incredible,” he said. “And then on top of that they are some of the best kids I’ve ever been around. All season long they loved each other and respected their opponents. They competed with every ounce of energy they had. When they won, they handled it gracefully. They only got beaten twice, but also in those times, they carried themselves with class. I simply could not have asked any more from them. I hope their families, their school, and their town realize just how special this team has been, and are beaming with pride.”

In just under a week, Hall will also start its indoor track season, which last year trained 180 athletes throughout the season. As defending CCC, State Class LL, and State Open Champions from last indoor season, the athletes are only becoming more excited for the weeks following.

“I am very sad that it is over because [cross country] is my favorite season … and it’s going to be weird adjusting to track again over the next couple of weeks, but I do have to say, my strongest events are in track so I am stoked for the upcoming season,” sophomore Ben Lewis said.

Conard will also begin its indoor track season in hopes to carry a legacy from now Stanford University athletes Gavin and Callum Sherry, who both broke many school records and won multiple individual titles throughout their senior season for the high school last year. 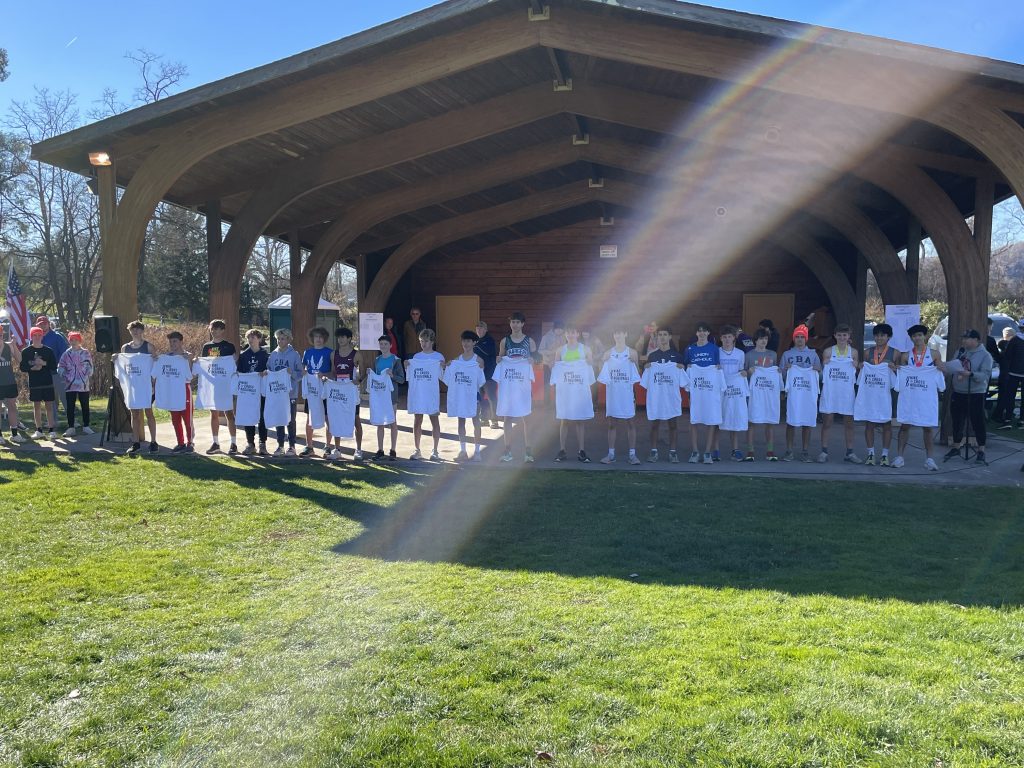 Below are the final times and places of all athletes who competed for Hall and Conard on Saturday.