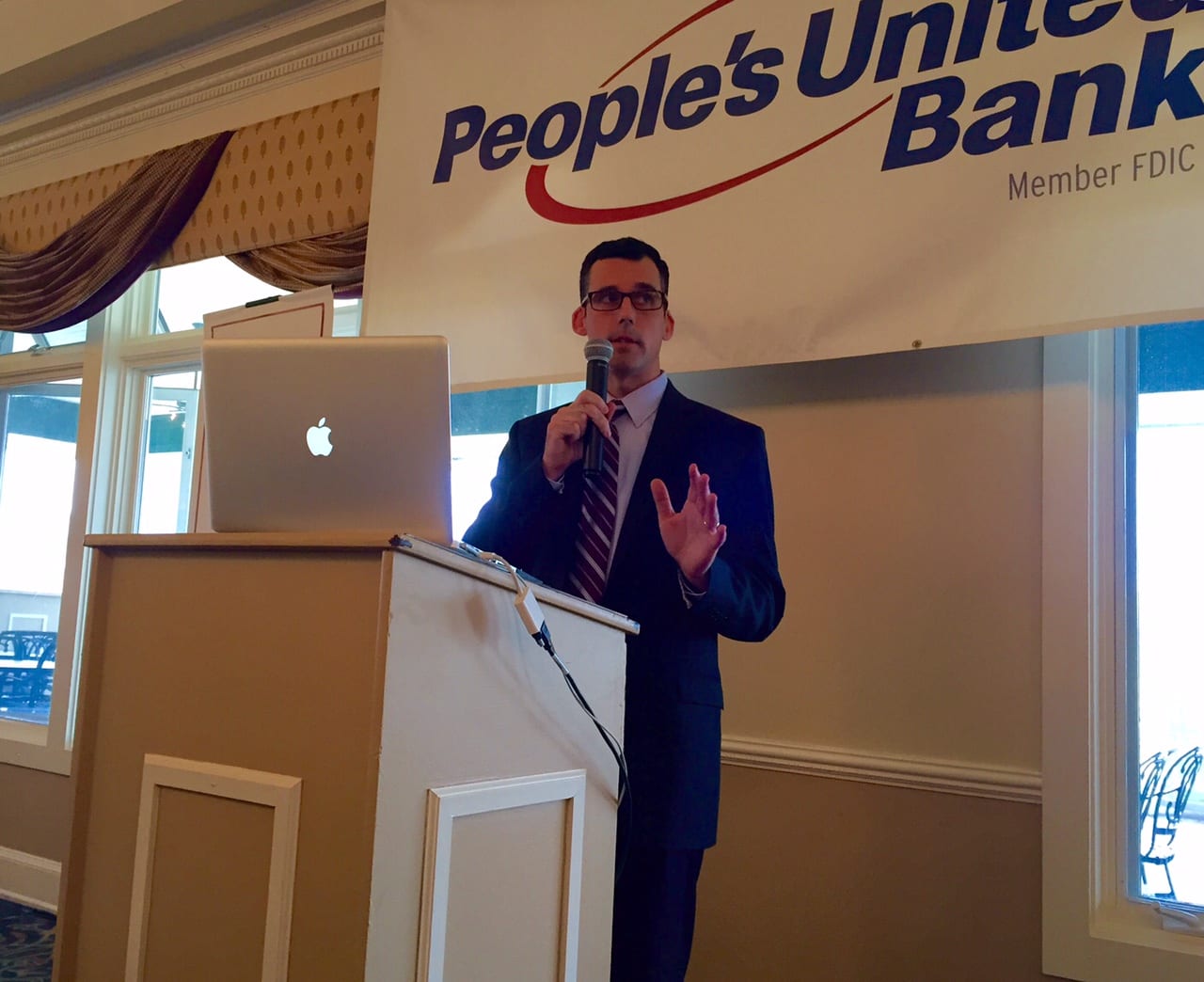 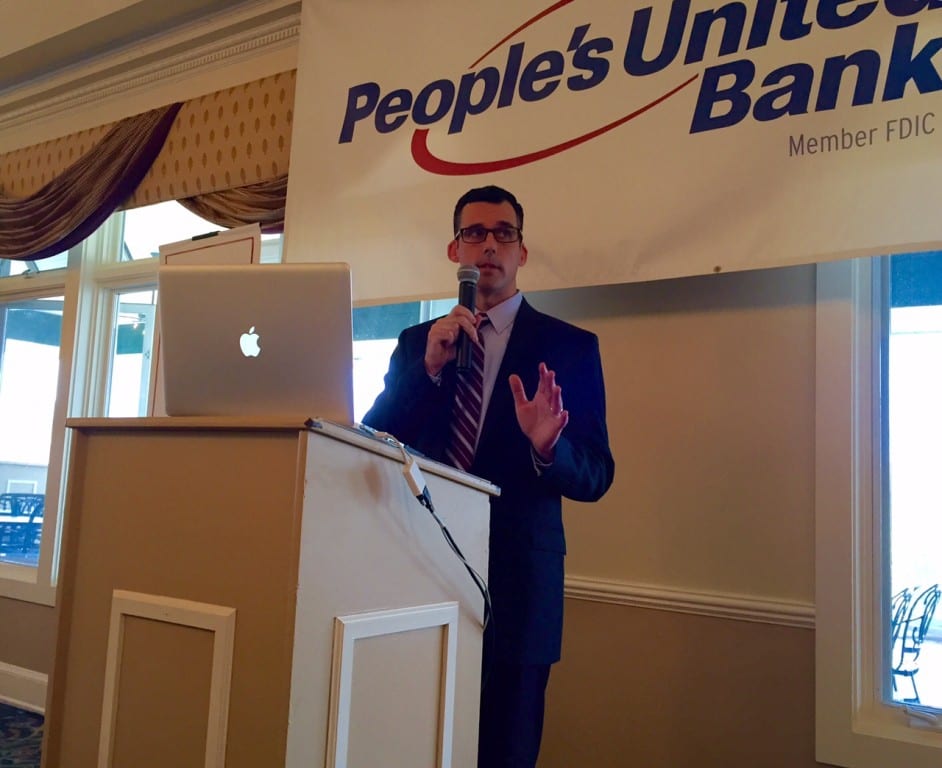 Director of Community Services Mark McGovern said last year that it was a good time to be the community services director in West Hartford, and he said that it’s still a very good time to be in that role as he addressed approximately 120 guests at the West Hartford Chamber of Commerce’s annual “Economic Development Update” luncheon Thursday at Wampanoag Country Club.

The economic development update provides “business buzz” on a monumental scale, and McGovern focused his presentation by answering these three questions: “What’s New? What’s Coming Soon? What Lies Ahead?”

The “What’s New?” included a rundown on stores that have opened in the past year like Cookshop Plus and Blue Mercury in the Center and West Elm in Blue Back Square. “Just in time for grilling season,” Omaha Steaks opened two weeks ago on South Main Street, he said.

New or improved businesses are not just in the Center, and McGovern highlighted the renovated Walgreens at the intersection of Farmington Avenue and Prospect Avenue. “That’s a great project and we worked long and hard with the developer,” said McGovern. The “Welcome to West Hartford” sign at the corner of the Walgreens property is a great addition as well, he said.

“Lots of gyms. Has anyone noticed this? I think we’re certainly known for our restaurants I don’t know if there’s any connection,” McGovern said. BodyRoc, LIFER Fitness Studio, and M.e.l.t. 30 are just some of the new fitness options he highlighted.

New residential projects include 24 North Main, a “beautiful building” that replaced some old houses and is almost fully leased less than six months after opening. Several buildings in the 10-home new subdivision under construction by SARD Custom Homes have already been completed and sold.

“We saw a nice bump,” McGovern said of the $34.2 million added to the town’s Grand List last in the past year. The Grand List totals nearly $6 billion and McGovern said it would exceed that number next year.

Construction is underway for Total Wine & More at Corbin’s Corner, and Harvest Wines and Spirit in Elmwood, McGovern said, with planned openings later this year.

When Charles Schwab vacates its space at 43 LaSalle Rd. to move into the 10 South Main St. location, a new restaurant will take its place. “The ownership group of McLadden’s will be opening a new restaurant in this location. Building permits just came in and we’re excited to see that,” McGovern said.

Blue Back Square will also be home to some new restaurants including the soon-to-open Bar Louie. “Despite its name it is a restaurant. We do not have bars in West Hartford,” McGovern said, eliciting a laugh from the audience.

Posh Tomato opened last year across on Isham Road, as a franchise owned by the owners of Goldberg’s Bagel Cafe. “That lease is being transitioned and will open up as Goldberg’s Gourmet this summertime,” McGovern announced, bringing a much-needed breakfast spot to Blue Back Square. The space will be closed for just a few weeks for some transition.

Thali is going to be opening up in the Moe’s space by the fall, McGovern announced. Blue Back Square is going to be working with Moe’s to relocate to another storefront in the district, he said.

Right next door to Thali will be Cook and the Bear, the collaboration between Tyler Anderson of Millwright’s and Jamie McDonald of Bear’s Smokehouse will also open by the fall.

Chick-fil-A‘s proposal is in the application process right now and will have a public hearing on April 12. “We’re really pleased with the architecture,” McGovern said for the restaurant that will be located on New Park Avenue, right at the sidewalk. It will have a drive-through which is permissible in an industrial zone.

New services include more fitness. “I’ll bet you were expecting that,” McGovern joked, naming Pure Barre and Orangetheory Fitness. Simsbury Bank is also coming to town, and will soon open in Sunset Triangle.

On the residential side new businesses include “The Landmark” which is the name for the new apartment building at 10 South Main which was recently built by the Kaoud family. Charles Schwab’s offices will occupy the ground floor.

Other residential properties in progress include 2432 Albany Ave. which will open in June, the 84-unit $20 million expansion of Brookdale/Chatfield, and 243 Steele Road. The first two buildings and clubhouse in the 243 Steele Road 160-unit apartment complex that replaced the former Mercyknoll will open in September, with the remaining buildings opening at 45-day intervals thereafter.

On the residential side “the big one” is the 310-unit Arcadia Crossing at the intersection of Park Road and Prospect Avenue. “We’re hopeful to see construction start in September,” McGovern said.  “This is a hundred-plus million dollar project. It’s by far the biggest project since Blue Back Square,” he said, and is “potentially a game-changer” for Park Road as well as Park Street in Hartford’s Parkville neighborhood.

The steel beams being erected for the Delamar West Hartford Hotel have reached the sixth floor on the south side of the site, and concrete slabs should be poured in April. “Hopefully, if all goes according to plan it should be done in the spring of 2017,” McGovern said.

The “transit” already exists in terms of CTfastrak, which will celebrate its first anniversary on Monday, and more transit will be forthcoming as the New Haven-Hartford commuter rail line is set to begin service in 2018. Funding for the design of a station in West Hartford has already been approved, but funding for the station is not available yet.

The mix of uses in the area includes major employers, destination retail, and two very active business associations – the Elmwood Business Association and the Home Design District. “Lots of engagement, lots of reasons for people to be coming to New Park Avenue,” McGovern said.

On the southern end of the corridor is 616 New Park Avenue, which Trout Brook Realty Advisors already has approval to build. Construction should begin this fall on the 54-unit mixed income housing project that includes ground floor retail.

“What do we need to do to fill things in?” McGovern asked. A study just begun by Town Planner Todd Dumais will look at what can increase investment in TOD. A better pedestrian environment and updates to the zoning code to support investment are two elements, but McGovern also said that the four-lane southern end of New Park Avenue “doesn’t promote a really nice environment.” A rendering of potential changes to New Park included turn lanes as well as bike lanes, and could be “really helpful in bringing more investment.”

In the Center, the zoning change which was the subject of a public hearing on Tuesday is intended “to promote good development.” That ordinance change would allow for increased density by allowing taller buildings as well as greater floor area ratio (FAR). Even if projects comply with the new zoning, there is a requirement that developers must submit any applications to the Town Council as a special development district. “The applicant would have to justify to our Town Council that the proposal makes sense,” McGovern said. 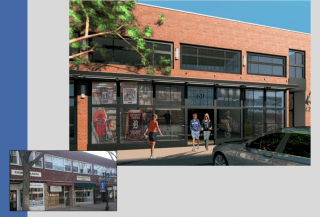 The zoning change is still awaiting comment from the Town Planning and Zoning Commission, and the public hearing will be continued on April 25 and then come before the Town Council for a vote.

McGovern said that LaSalle Road Partners, which purchased the Sinatro properties in December, is actively working to lease vacant space. “They tell me leasing activity and interest is been high.” Primary focus is to lease the vacant space and to update the façade to attract more interest.

The 58-acre UConn property is still an unknown for the future, and still under discussion. Along with the Town of West Hartford, Weiming Education Group is also negotiating with UConn for their “vision to locate to the UConn site and bring students from around the world” to West Hartford where they would also attend schools in town for their junior and senior years.

“This is a real promising opportunity for a number of reasons,” McGovern said of the Weiming proposal. It would allow for continued use of the buildings on the site, decrease taxes, and would bring a taxable entity to the site. West Hartford currently receives only $200,000 – $250,000 in revenue on the site from the state as part of the PILOT program.

A partnership with West Hartford Public Schools is already in place, with plans for 30 students from China to attend school, and pay full tuition, in West Hartford beginning in the fall of 2016. The students, who have already been interviewed by Assistant Superintendent Andy Morrow and Director of Continuing and Summer Education Roszena Haskins, will be split evenly between Conard and Hall, McGovern said.

“So where do we stand?” McGovern asked. “When I said last year that it’s a good time to be the community service director, it still is.”

“Lots of investment. Our pipeline is over $200 million. We are staying steady at 800-plus new residential units.” Office and retail occupancy rates continue to be very high, with Blue Back at a 99.4 percent occupancy rate.

“I think it’s clear restaurants will really lead the way in the retail sector,” said McGovern. He said he’s as disappointed as anyone else when local merchants close, and there have been a number of them.

“As disappointing as it is what we’re seeing is high demand for that space afterward. In most cases it’s restaurants. It’s not a bad thing, it’s a different thing. It’s part of the trend,” he said.

“All in all West Hartford remains a desirable destination for people, for visitors, for homeowners, and for businesses alike. I think West Hartford’s future is bright.”